Back in 2021, Tyson Butler-Boschma made an incredible Superman demo using free assets from the Unreal store. The demo was widely praised but a company decided to steal it and sell it on Steam.

The team that stole my free superman demo and are selling it on Steam, are now copyright claiming my content on @YouTube as well…
They are straight up attacking and harassing me at this point and I don't feel safe providing my personal information for a counter claim… pic.twitter.com/dqd0oHjul4

Tyson found out through community members that his demo was stolen and is being actively sold on Steam. The company, Hero Game Studios, is claiming that TJ ATOMICA, Tyson’s username, worked for them. Even posting a message on TJ’s warnings that highlights how oblivious they are. 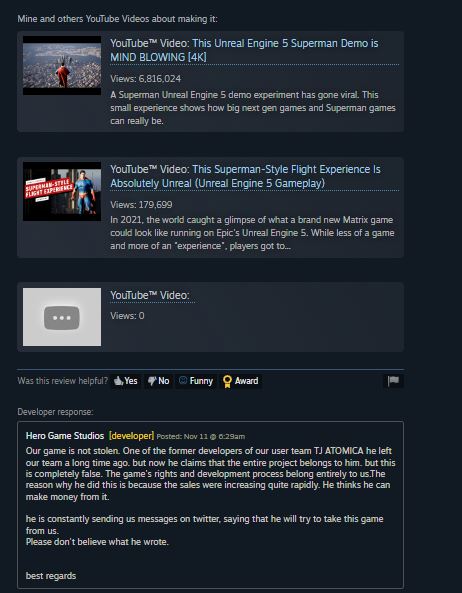 Adding salt to the wound is the message they sent to YouTube to justify the copyright strike. The image above says it all and highlights how poor YouTube’s system is. YouTube does attempt to remain neutral in these matters seeing how frequently this system is abused highlighting that changes must be made. Bungie went through massive problems dealing with a YouTuber who made false claims.

To counter a strike one must provide their personal information. Tyson has stated does not want to do it out of personal safety as he cannot afford a lawyer and has been actively facing harassment since the Steam page was created. Those who played the demo seeking him out since the game includes a message from Tyson about how to play it.

The story is gaining traction and likely that Valve and YouTube will take action against those involved.

Tyson was able to get the game taken down and his video reinstated.

Part of me hates it took a mob mentality to get this stuff sorted, because I am convinced if it hadn't blown up, nothing would have happened, or at least much slower and a lot more pain for myself in the process. I am incredibly blessed to have had this community behind me.