The Deep End Games crew released an unappreciated gem with Perception a few years back. That game followed a blind protagonist as a malevolent spirit hunted her through various eras. It had the unique selling point of using sound as sight. Since the protagonist was blind, she “saw” sound as it reverberated off objects. It worked well, and I’ve been pushing for more people to play it. 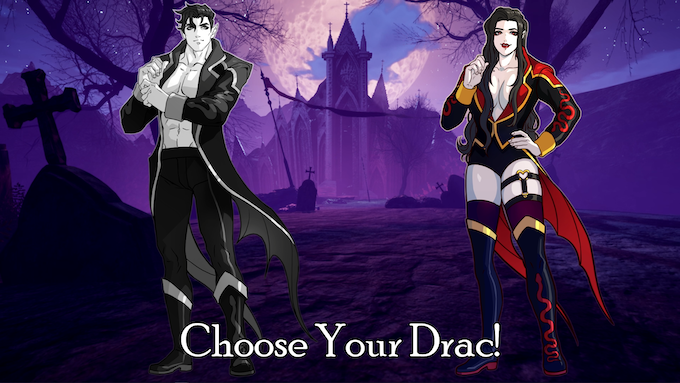 Drac gets sucked into a reality dating show by none other than the Grim Reaper himself. At this point in the demo, some choice and creativity appear for the player. You can choose which binary gender you want to represent in a female or (default) male Drac. Being female was, unfortunately, unavailable during the demo. The demo also currently has only three romanceable options. One is Vess; she’s a genie presently working as a bartender because she got screwed out of her powers by her former master. The other one I ran into was Brocifer. (Who is exactly who you think he is; the Devil is bro-ing it up and ready to party!) I don’t think he owns any clothes, though, because he is walking around the entire demo wearing nothing but pixels and a can-bang attitude. I never came across the third option (that was probably my own fault as I struggle to navigate in every game I play).

It’s a great option to note that in Romancelvania, you don’t have to date everyone; even the Reaper himself notes that you can choose to be friends or potentially have as many partners as you can. It’s between you and whoever you’re talking to, and I appreciated that.

Gameplay-wise, there is an obvious homage to Castelvania with the 2d-ish side-scrolling and the combat consisting of melee slashes and spells/casting attacks. I did like the bat attack that sent exploding bats out. The early combat felt satisfying as Drac had all his powers and could run and move fast. The later combat wasn’t horrible, and it made sense that we would be limited to having to get powers back. It was the Grim Reaper’s way of getting us to play along and do the dating show in the first place. I also liked the platforming that broke up some of the areas, like how Vess was on the other side of the pool and the only way to reach her was by hopping along pool floaties instead of just walking around the pool.

Thankfully the game is fully voice-acted, so I got to enjoy the other side of the gameplay without being distracted by a ton of reading. The player gets different dialogue options, and the potential partners/friends react accordingly. I tried to be charming with Vess; it looked like it paid off, and she found me endearing. I had to note that her quest seemed bugged, which can be expected in a demo. She asked for ice, and I got it for her as she requested, we talked, and it went great! However, when I returned to try to further the quest, she just asked for ice again. I couldn’t get it to progress to the point of the only available date. Brocifer was down for it immediately, but he’s my homie, and I didn’t want to do that with him.

I didn’t come across any mini-games, but there does look to be a few in the main game, according to the Kickstarter page. At the very least, there is a massage mini-game with one character in particular.

If you do install the free demo of Romancelvania, expect some bugs. The team is working hard on fixes, but it is just a demo for now. I recommend plugging in a controller. It removes a text issue I encountered where the demo soft-locked because it wouldn’t let my mouse choose a text option. I already mentioned the quest glitch; thankfully, I didn’t experience many other issues. I saw some animation lock; if you spammed movements just right, you could make Drac bounce around in a funny position. Nothing super game-breaking. 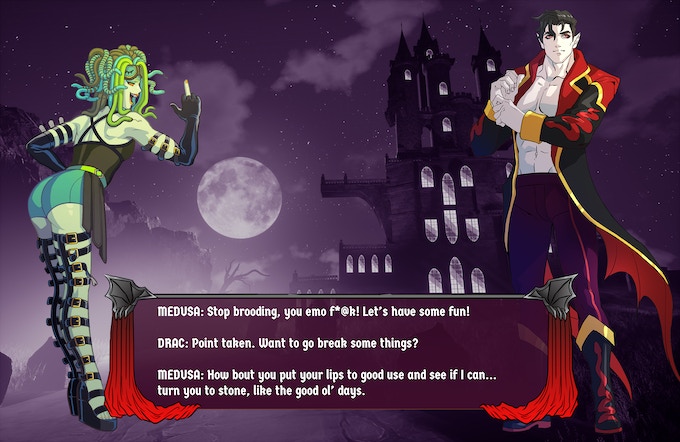 To close it out, Romancelvania shows a lot of promise. The cast looks fantastic, and everyone I have come across plays their roles very well. I am eager to see what the full release brings. I don’t enjoy the Metroidvania or dating sim game genres, but it works here, and I can’t wait to see more of it.

(Final note, I would let Medusa do horrible things to me. Do with that information what you will.)