The Batman Arkham games are some of the greatest video games in entertainment, setting high standards for future superhero games. So when Gotham Knights was announced many expected the same recipe in terms of a dark atmospheric story and robust active combat. That’s not what you’re getting here, instead, Gotham Knights aligns more with Assassin’s Creed Valhalla than Batman Arkham. With a tediously bland open world but an alluring visual design, Gotham Knights is a mediocre adventure. 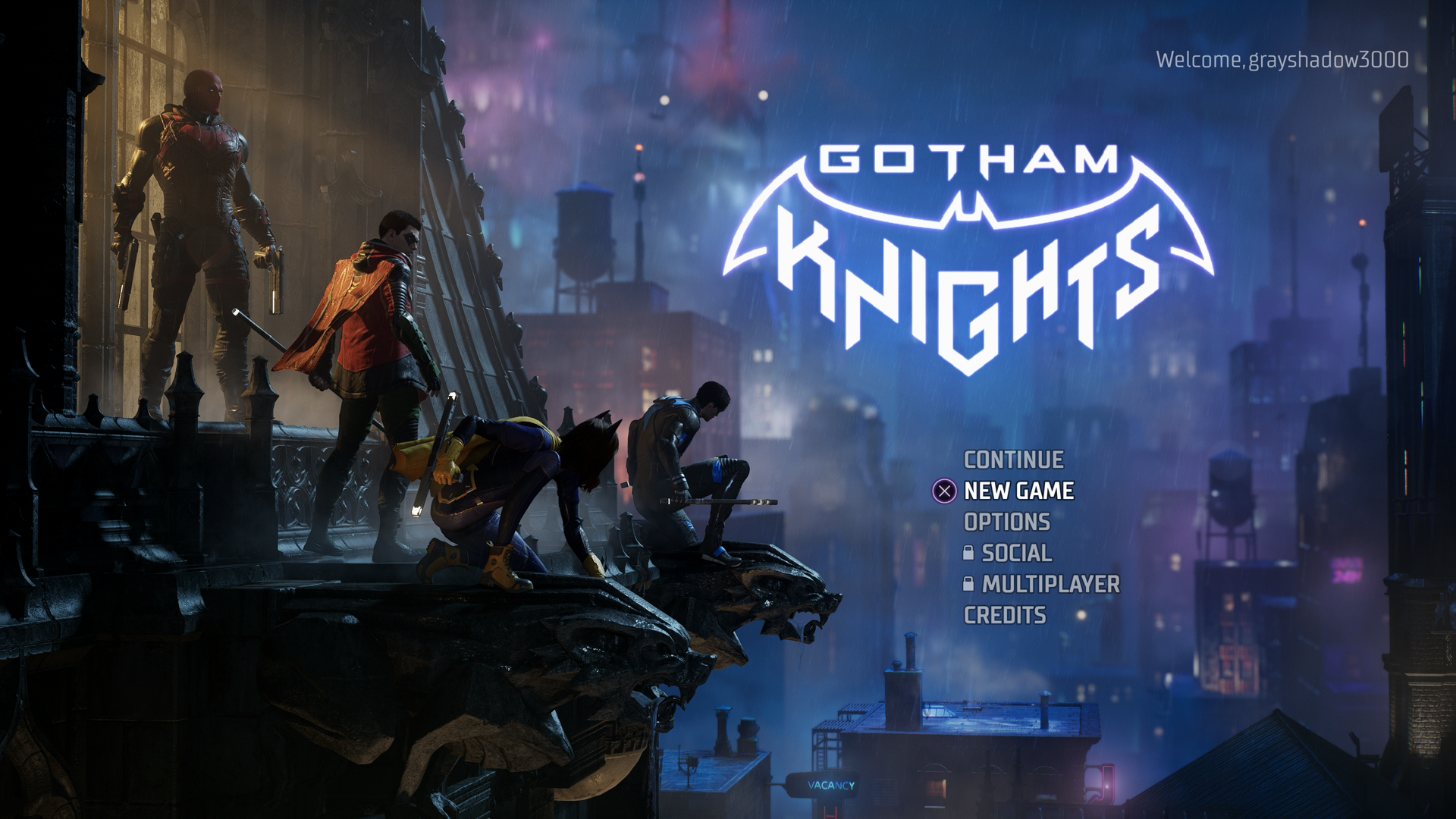 Gotham Knights star Batman’s family Time Drake, Dick Grayson, Jason Todd, and Barbara Gorden. After the death of Batman, they decide to take over protecting Gotham and closing cases left behind by Batman. The story is largely uninspired and easily predictable. Much of the appeal comes from seeing the various interactions between those you decide to take control of. The developers included unique dialogue options depending on who you’re controlling to encourage new playthroughs through New Game Plus. The voice-acting is adequate but there was so much untapped potential for a narrative involving Batman’s family.

During the adventure, everyone cooperates and there’s barely any tension between them. Sometimes they’ll bring up Red Hood’s previously killing criminals and Dick Grayson’s cocky attitude but it’s usually resolved within seconds. Rocksteady’s interpretation of Batman’s family was more interesting in comparison. Despite cooperation, there was a great deal of tension between characters such as Nightwing feeling he’ll never meet Batman’s expectations or Tim Drake showcasing his vulnerability with Barbara after Arkham Knight. Instead, much of the dialogue plays off like a cheesy teen drama where difficult events are often played off with a modern Marvel movie comedic tone. It always doesn’t help as you’re playing as a specific character the game doesn’t really explain what the others are doing. They’re always ready to talk to the player but considering each one of Batman’s family are exceptional warriors and detectives it seems strange this dynamic would exist. Especially when you bring Alfred into the mix, making any technical reasoning for staying behind unnecessary since Alfred is notorious for handling things on the backend. 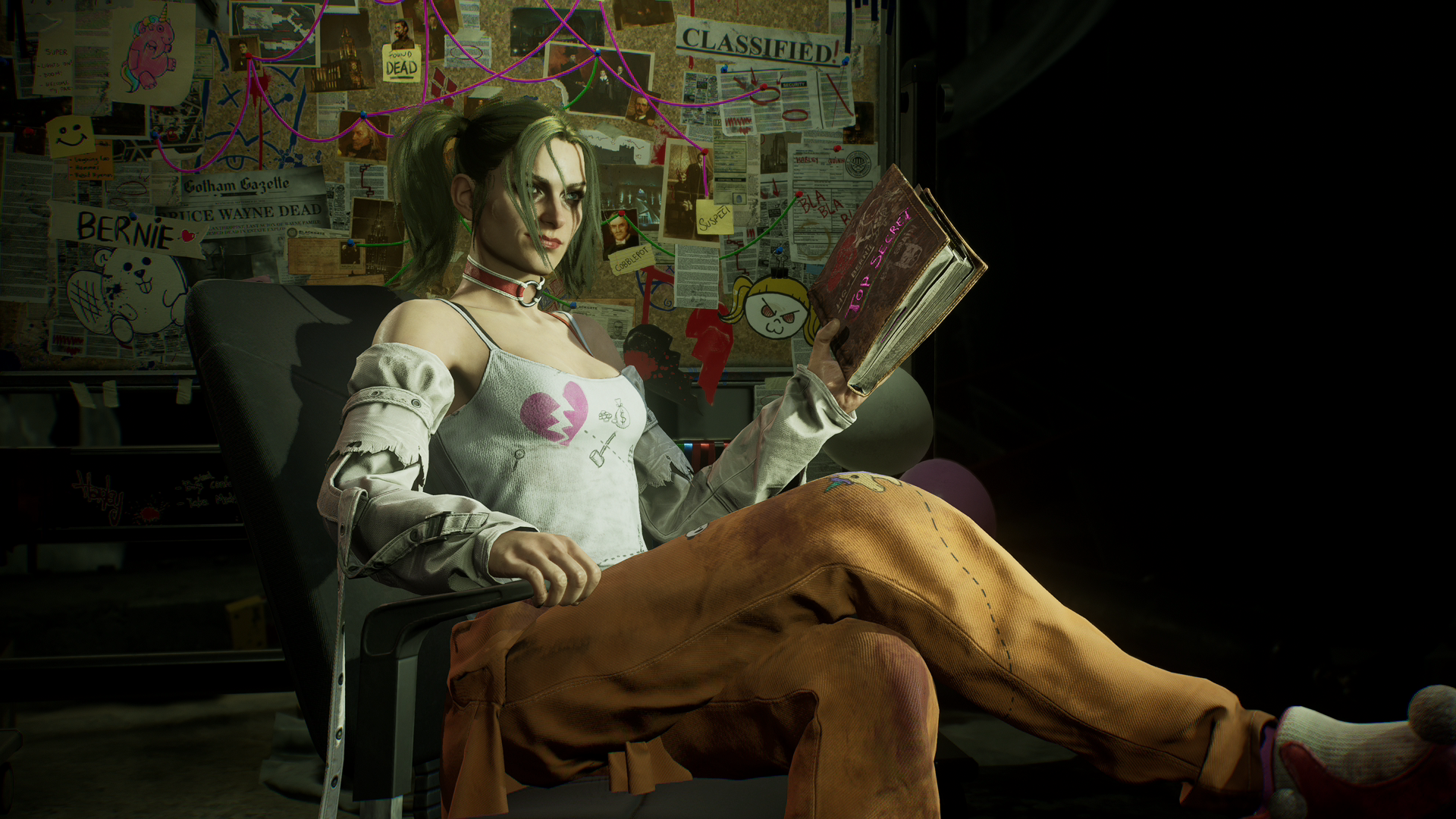 The Definition of Insanity

Compared to many last-generation open-world games Gotham Knights is hollow and uninspired. Traveling through the city you’ll notice how lifeless it is and the Batcycle barely has any sense of speed or momentum. Hardly anyone is around and the activities repeat themselves in the same locations. With the exception of very specific tasks, the developers even reused locations for case file objectives which are isolated missions. Why even create an open world if you’re only going to use a handful of areas over and over again? Fast travel is available once you complete more repetitive missions but traveling through the city is slow regardless. Unlike Rocksteady’s games where Batman would travel across Arkham City or Gotham with ease thanks to the divebomb and gliding combo here, you have to use the slow Batcycle. And unlock the Batmobile which comes out in a cool cinematic way regardless of Batman’s position the Batcycle just appears out of cloaking. You can even run people over with no consequences and unlike Batman Arkham Knight where they show Batman shocking the person to highlight something non-lethal here, you can just hit and run people like in GTA.

Gotham Knights doesn’t have the same level of care as Rocksteady’s various titles. When Batman threw someone off a high ledge he would pin them using a grapple but here they fall to their supposed. This seems picky but a lot of the small details that made the Arkham games such a massive hit are noticeably missing here once you start looking. Even logic falls apart, seeing the Court of Owls just appear randomly on the map despite the game stating how Batman was unable to prove their existence is just shocking.

Those who were worried when the trailer featuring Gotham Knights’ combat system have been proven right. Imagine Assassin’s Creed Valhalla’s combat system but cut down to the bare minimum and you have Gotham Knights. There’s nothing wrong with trying something different but this system is so basic and dull that you’ll spend more time mashing square than doing anything else. When you get past level 25 the enemy health pool becomes so large boss fights can take up to 15 minutes as you go through the same attack patterns over and over again. Stealth options have also been reduced dramatically compared to Rocksteady’s games. Overall it’s a standard system and coming off Batman Arkham Knight this is a massive leap backward. 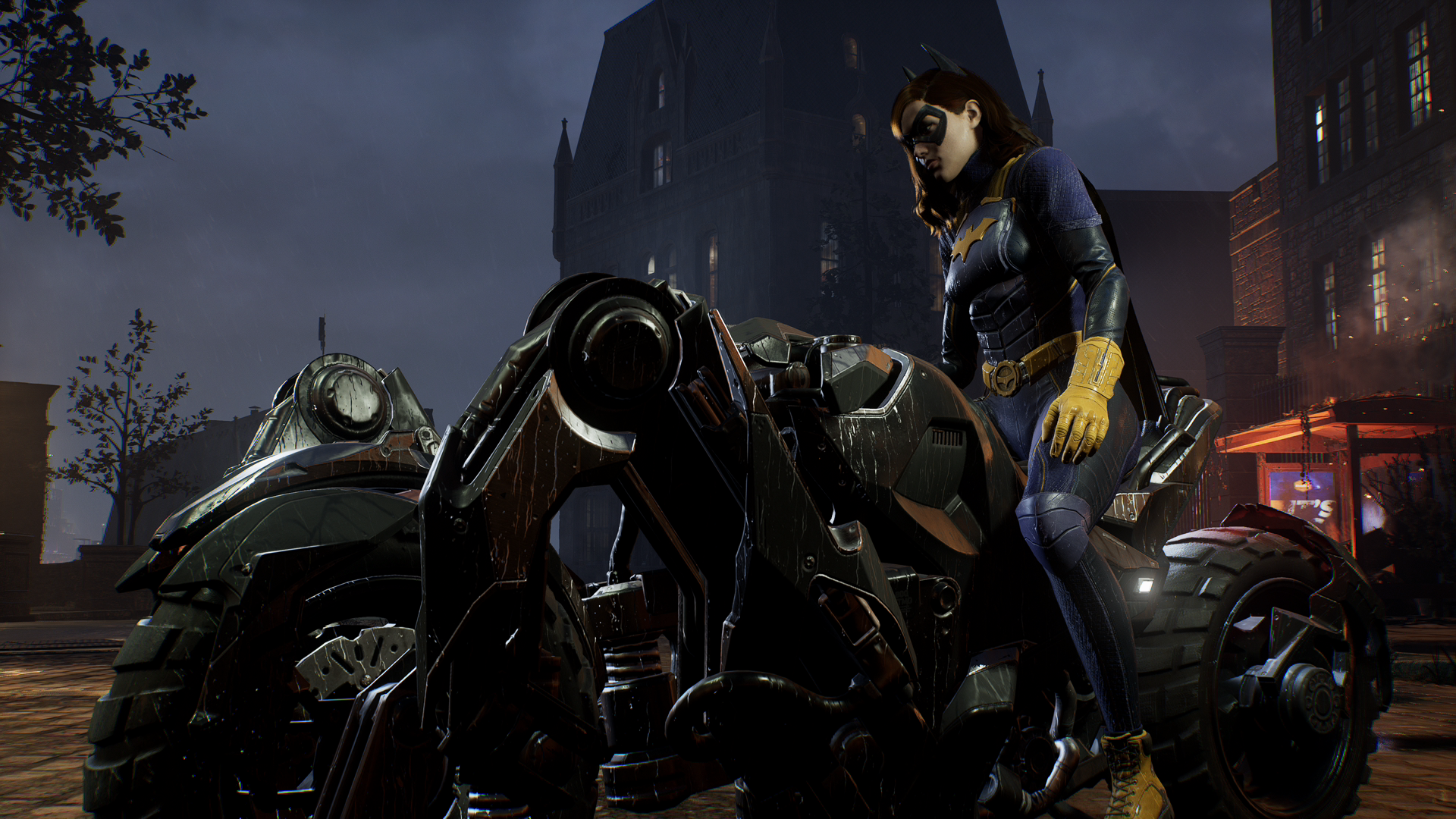 The surprising thing is that Gotham Knights has some incredible visuals. The armor sets for each of the characters are incredibly designed and you can transmog suits but cannot change the color pattern for transmoged items. Animations are terrific during cutscenes and the boss designs are exceptional. Clayface, Mr. Freeze, and Harley Quinn look amazing and could’ve been amazing bosses if the gameplay wasn’t so tedious and the health pools so large.

Getting to the appealing content does mean grinding a lot by completing repetitive tasks. This awards the player with experience points that earns you points to place into 1 of 4 talent trees, the fourth only being unlocked away dealing with an annoying Knighthood tutorial. The Knighthood option is necessary as without it you cannot unlock the unique mobility option for each of the characters. Other items include resources that allow you to craft new gear and earn mods to further upgrade your arsenal. You’re given enough material to craft and with the exception of legendary gems only given for defeating very specific criminals you’ll have more than enough items. Just be prepared for that large grind.

The Belfy serves as your central hub to craft new gear, go through the evidence, and start optional cases. Unlike the demo shown to the public these cases segment the city and can only be started from the Batcomputer at the Belfy. The developers did attempt to create a sense of investigation but forcing the player to head into Gotham and interrogate specific criminals for information dealing with these case files but it serves as filler. 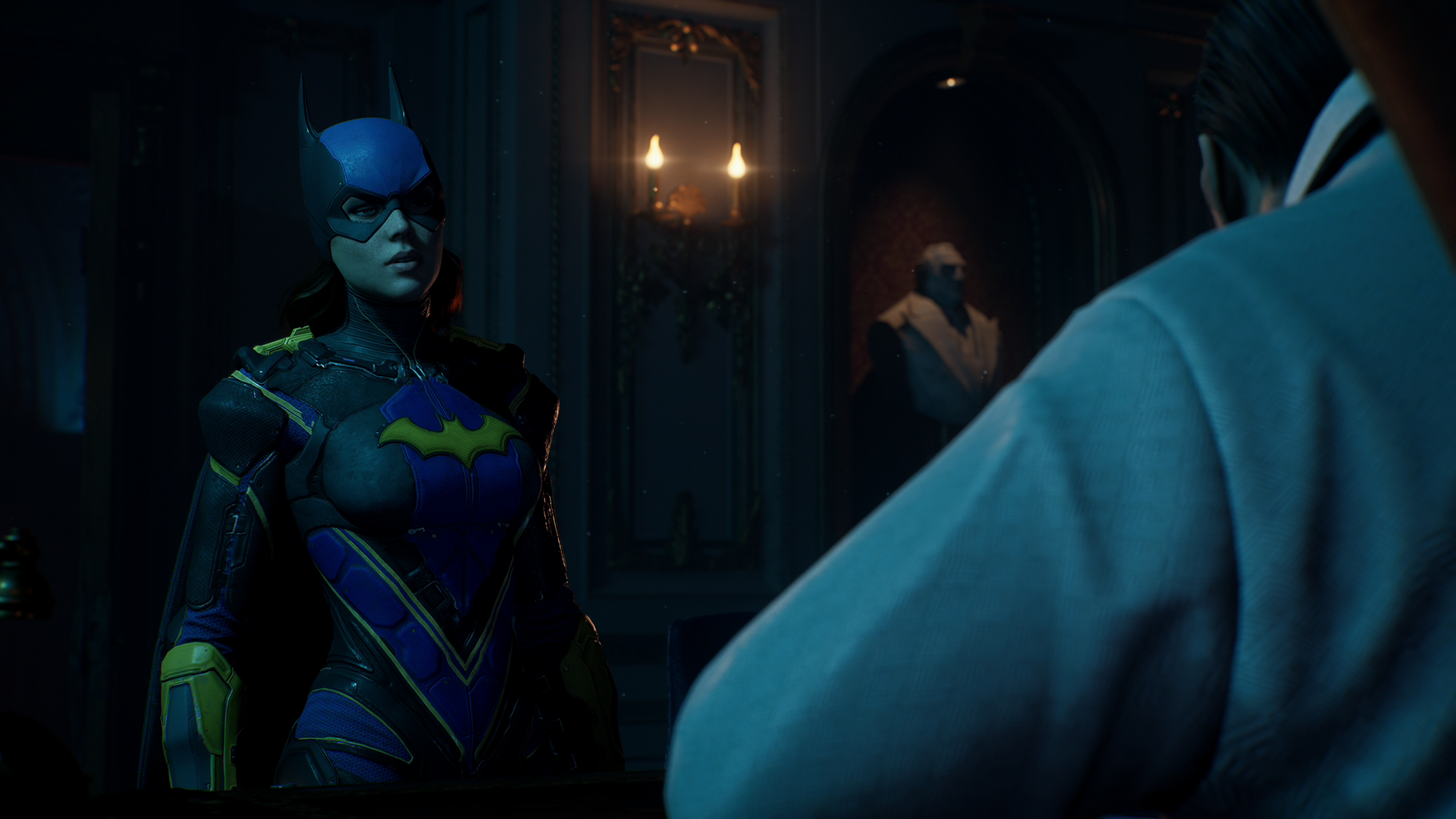 The linear sections of Gotham Knights are a lot of fun, especially with a friend. It does make the game incredibly easy even on the hardest option but these sections are the most appealing parts of Gotham Knights. The developers did attempt to break up the action with small puzzles involving linking items together but it serves more like a trial and error system. Alongside optional collectables that provide insight into this version of the Batman universe such as what happened to Catwoman. 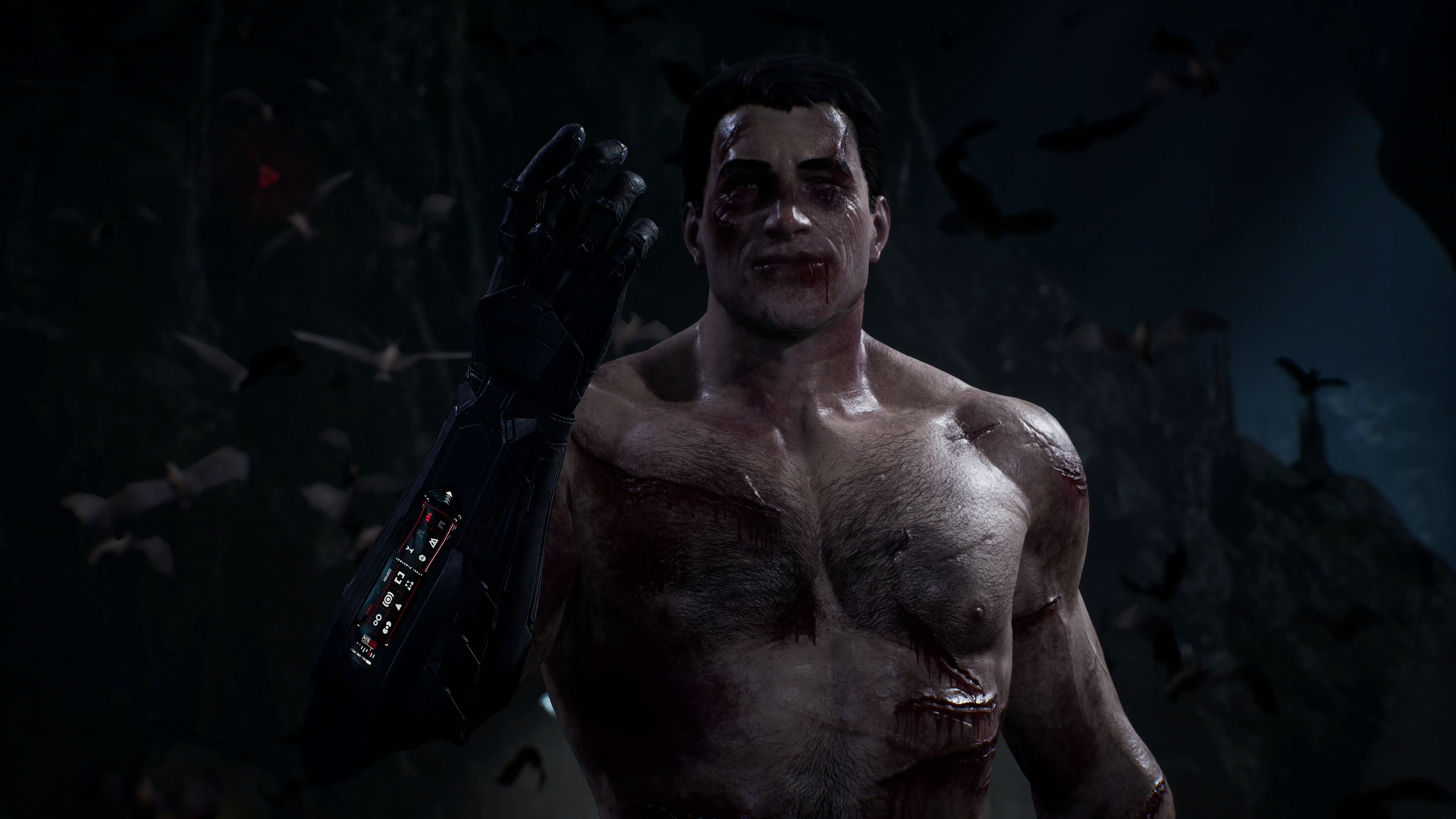 Gotham Knights isn’t a bad game but it doesn’t meet the high expectations many expected from a modern-day Batman game. The game is simplified to basic button inputs and the narrative is predictable. The open world is hollow and teeming with repetitive missions and a heavy grind to complement it. The disappointing part is that Gotham Knights has the foundation for a good Batman game but is hindered by many things the biggest being the empty open world, RPG system, and large enemy health pools. Gotham Knights is your standard adventure game with little to offer beyond what you experience in the first hour.