Despot’s Game: Dystopian Army Builder encourages proper planning but more on luck. In this dungeon crawler, you’ll send your human slaves into suicidal battles. Crafting the perfect team but always under the thumb of RGN. Despot’s Game: Dystopian Army Builder expects you to fail and keep coming back for more punishment as the dungeons are filled with the corpses of fallen humans.

Despot’s Game: Dystopian Army Builder plops you in a random dungeon. The goal is to escape by finding tunnels within the system. To achieve this you’ll need some human slaves, equip them with gear, and send them to face the horde.

Players start each run with a selection of options from traditional difficulty and which classes to start with. Most rooms are filled with enemies, which your humans automatically fight against. Each human has a specific amount of health and levels up if they’re kept alive. If killed you get back their gear but lose the human and high-level humans are necessary to complete later levels. Just recruiting new slaves will lead to failure, you need to keep them alive or weigh the options if sacrificial options come up. These optional decisions are sometimes too good to turn up.

Completing rooms earns you tokens that are used for new humans, gear, and food. Every time you travel into a new room, old or new, you use food. This means you have to plan according but you can return to old rooms with food options to buy more but not new gear. The more humans you have the more food is needed, so you cannot just add more slaves without consequences. You have to balance your army and your food stores constantly since the developers reduce the number of opportunities for getting more food as you progress.

As for gear, players have a variety to choose from with different tiers and class options. You need a balanced team of range, healers, tanks, casters, and melee to ensure victory. Stronger options require more tokens and you don’t always get those options even when you upgrade the choices. Despot’s Game: Dystopian Army Builder randomizes all options so sometimes you’ll get top-tier items and sometimes you won’t. You can recycle any older gear for more tokens but even with a great team sometimes things don’t go your way. 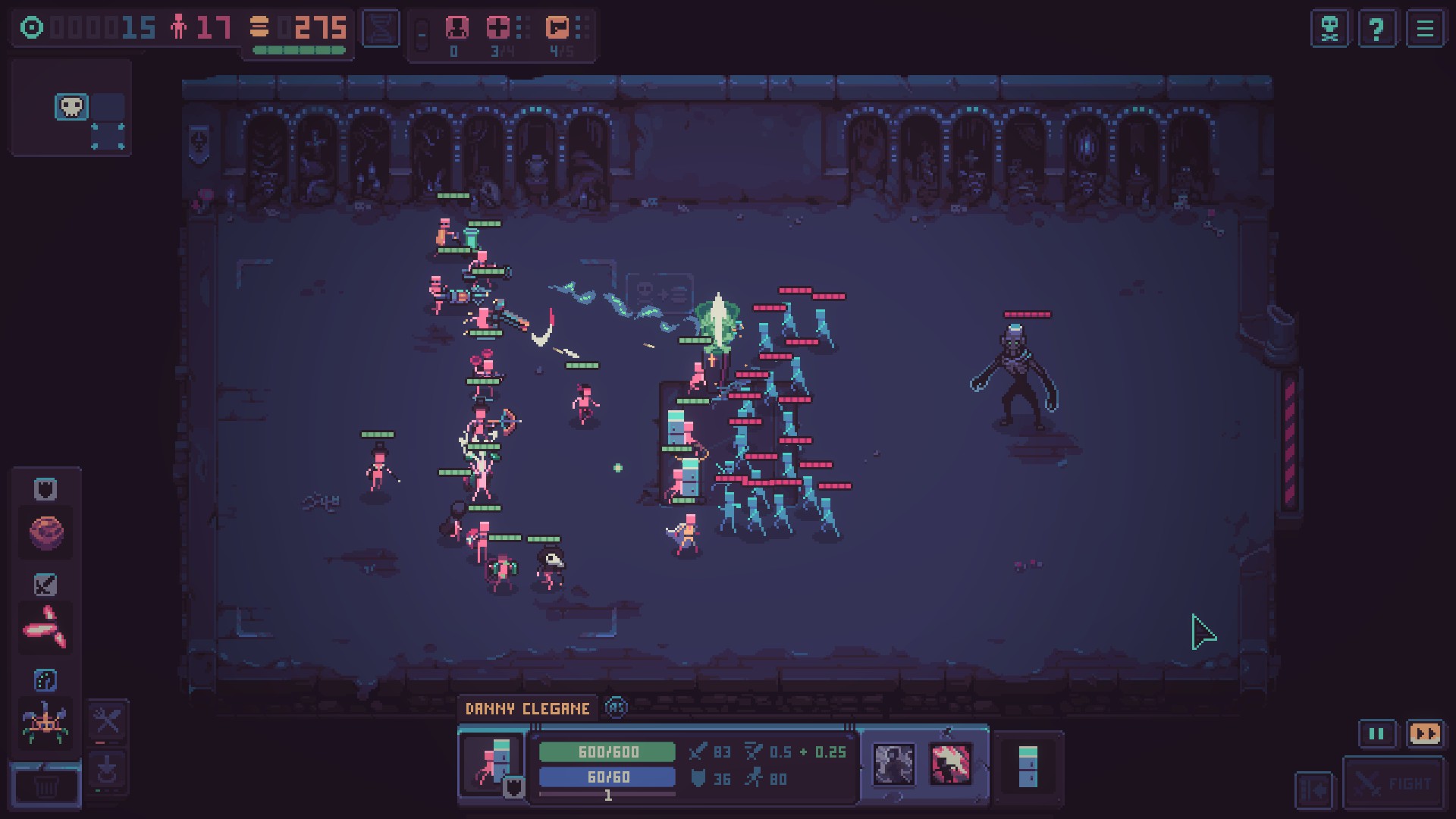 When crafting your team players can choose to develop their own formation or allow the game to auto-sort the best combination. The entire interface is each to use and visually pleasing. Much of Despot’s Game: Dystopian Army Builder’s visuals are fantastic, with incredible animations to match. Each new level offers new enemies to encounter and finding how who they are is a joy. The thrill of the unknown is definitely present here, as you encounter more elaborate foes to take down.

The biggest draw to Despot’s Game: Dystopian Army Builder is also its greatest weakness. The RNG when providing enemies and routes can be fair or unfair depending on what you get. Doesn’t matter how well you prepared, 1 room can destroy a run or a series of bad luck rolls. It adds to the excitement but as you get further into the game fewer rooms provide food and options to recoup your lost inventory. The game does offer mutations such as healing allies or clearing rooms for clearing certain rooms and extra optional tokens by completing optional missions. Even with these, some enemies prove to be so powerful that no team combination could prepare me for the upcoming battle, forcing me to rely more on luck than skill. Worse is that you cannot swap gear between humans. I understand this is to keep the experience balance but offering a trade-off, like losing a level would’ve been ideal.

The developers clearly had fun designing Despot’s Game: Dystopian Army Builder as the game is full of pop culture easter eggs. Star Wars, One-Punch Man, Doctor Who, and many other iconic references are in this game and connected to the gameplay. Despite this, the developers never rely on these things but instead created their own vision while using them. Creating this dark comedy-filled horror experience as you make harsh choices covered in a layer of humor. 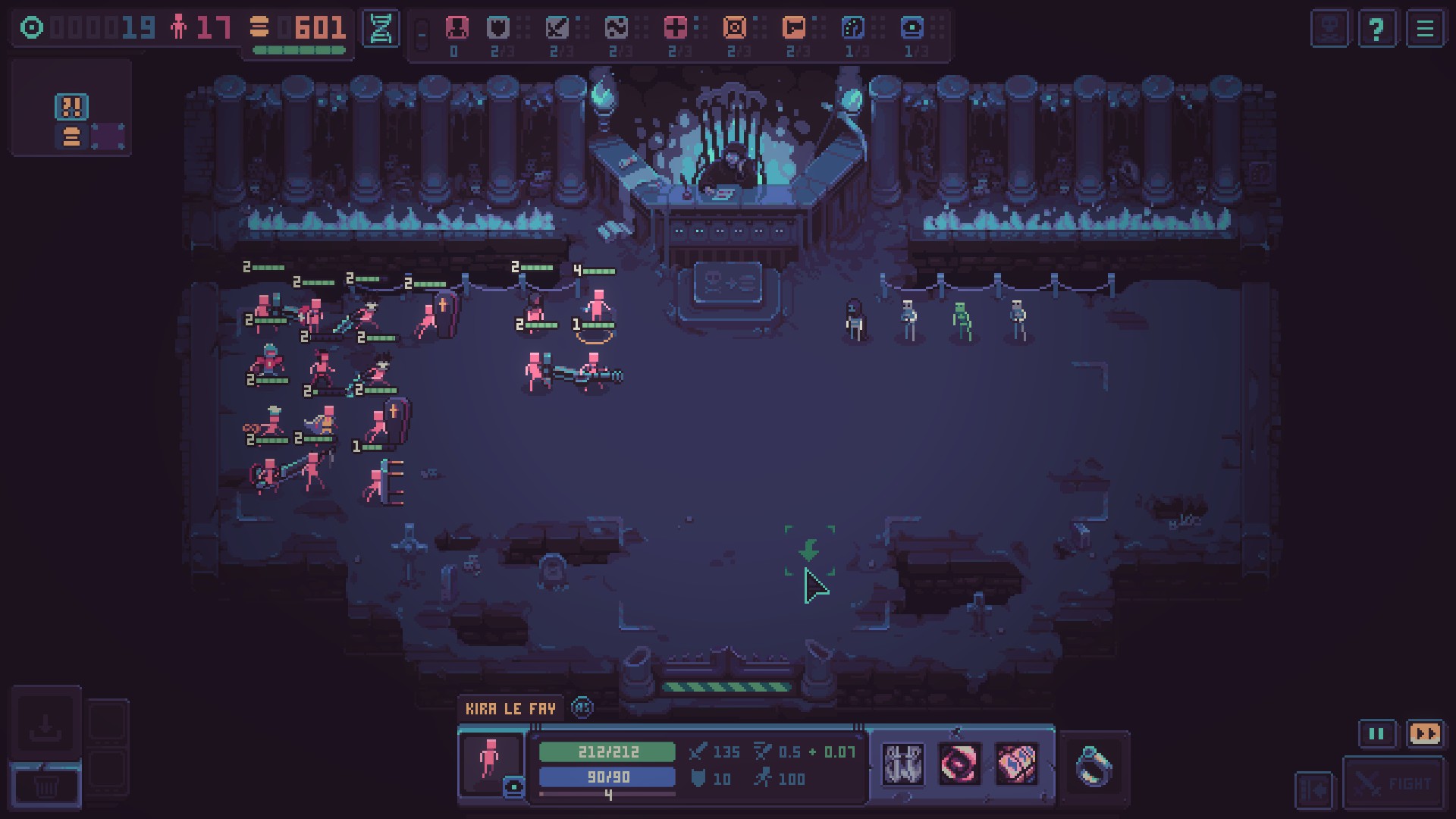 If you’re feeling confident players can take on other players in the Brawl mode. Here players prepare in 3 rooms of combat before heading into battle against another player. If you lost a battle players can continue but constant losses will have you kicked from the arena. The PvP combat plays similar to the core game, develop your team using the mutations and gear provided and the tokens earned. There’s no food but each arena takes place in the same layout but with random enemies that are pushovers. It’s very addicting once you get into it, constantly preparing for what’s to come and taking on random players with different strategies that you can use in the single-player.

Despot’s Game: Dystopian Army Builder is a thrilling experience that encourages you to retry after each failure. Getting into another run is easy but failure is constantly looming overhead. Often you’ll prepare for the best but end up facing something far worse. The PvP combat is addicting, as you climb the despot ladder and take on other slave owners. Despot’s Game: Dystopian Army Builder gives you the opportunity to play God with some puny humans, just be prepared for a lot of death and failure to achieve success.