A Plague Tale: Innocence shocked fans with its grim setting and profound characters. With Teenage Amicia de Rune was forced to grow up while protecting her 5-year-old brother. A Plague Tale: Requiem is bigger and more ambitious than the previous game in every way. Expanding the locations Hugo and Amicia will travel through and the deadly encounters that will follow. But also includes situations that stretch out the experience, especially during the 2/3 mark of the game. A Plagued Tale: Requiem is an outstandingly dark tale that is worth experiencing, especially for fans of the previous game. 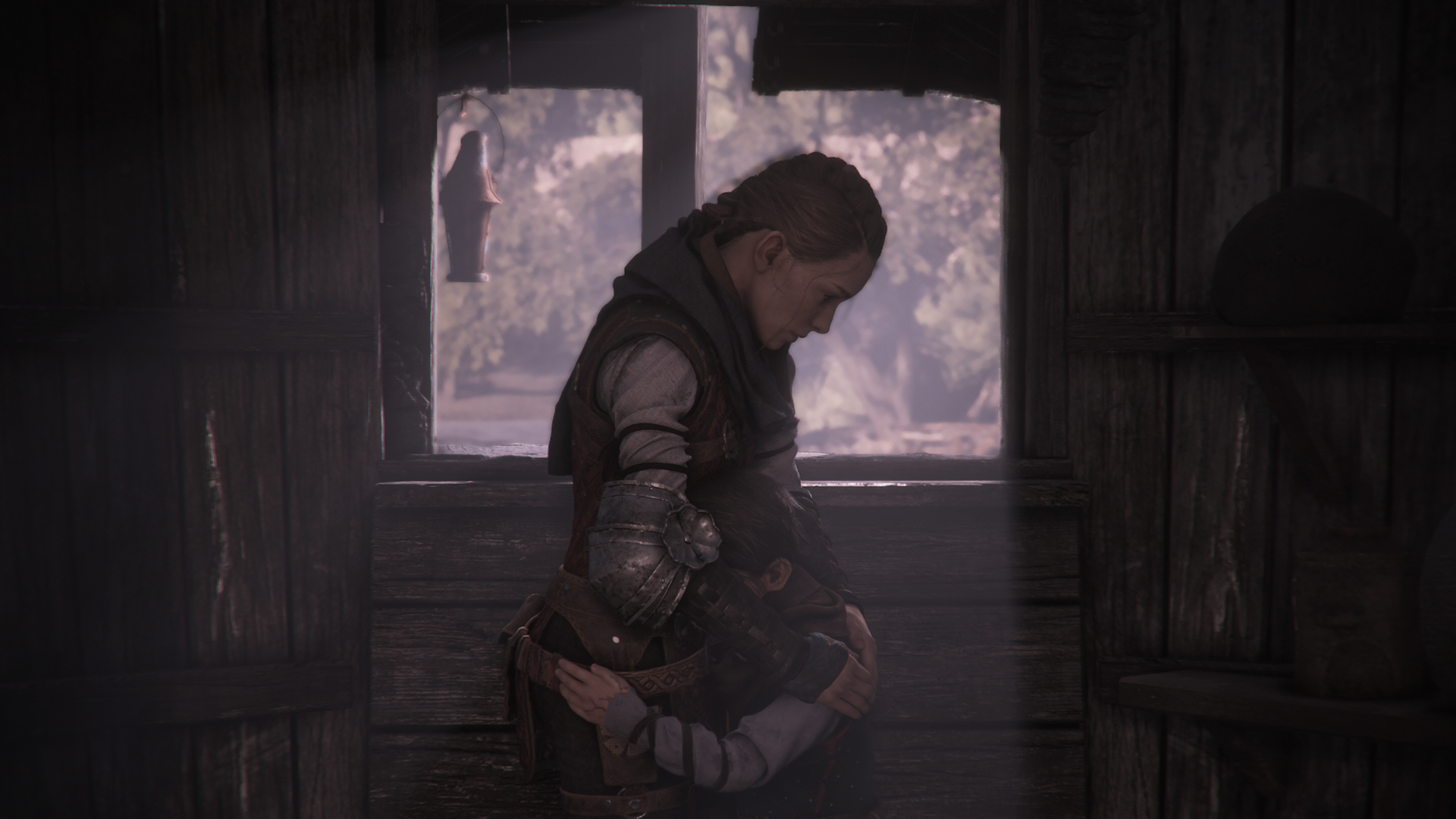 A Plagued Tale: Requiem takes place months after the events of the first game. Hugo, Amicia, Lucas, and Beatrice are fleeing their of home Guyenne. Things get worse when Hugo’s Macula flares up again and the rats and plague have spread beyond their home. Hugo is suffering from his condition but the developers went further to expand Amicia’s narrative as well.

The first game did an okay job of showcasing Amicia’s desire to keep her brother safe but here she’s given more screen time to highlight her emotional state. The need to keep her brother safe along with the many people she has killed is taking a toll on her. Slowly Amicia becomes more bloodthirsty, often going on rampages. In the first game, it was easier to forget this was a teenage girl but here the developers don’t shy away from this fact. The writers did an incredible job of parring Amicia’s need to protect her brother with her growing unstable emotional state that causes those around her, especially Lucas, to worry about her.

The story goes beyond the first game to explore more locations. Unlike the previous game sticking to dark and moody environments A Plagued Tale: Requiem has more colorful areas. This is explored in the latter half of the way with an open-world island that you can explore. This comes with more characters to interact with such as a worn soldier and a smuggler, both of who take an active part in gameplay. 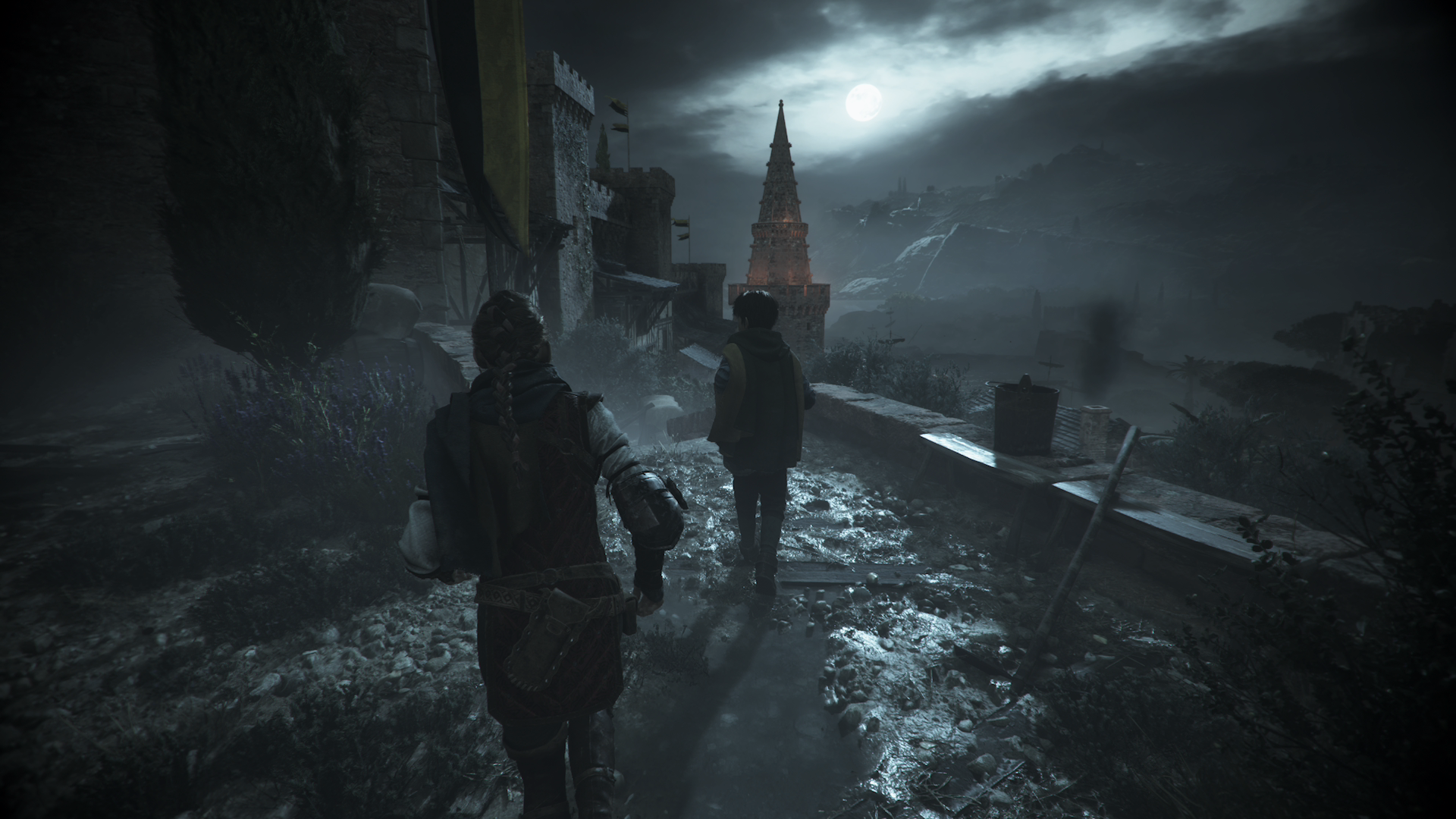 More Than 1 Way to End Things

Unlike the first game, the developers decided to explore more avenues for progress. Instead of 1 way to take on objectives players have multiple ways to complete areas. This can be vexing as it leads to more ways to get trapped. Amicia still has many ways to combat the challenges ahead, with alchemy recipes to avoid rats and distract soldiers. The sling is still Amicia’s primary way to kill but she now has access to a 1-time use knife but these are also used for unlocking locked benches. These yield a lot of resources and since knives are rare keeping them is more prudent.

That being said, combat is still the worse part of A Plagued Tale: Requiem. Often the game forces the player into combat in intense situations. Amicia may be capable but she’s not strong and relies heavily on hit-and-run tactics. This wouldn’t be a problem but too often the game forces you into direct conflict, especially toward the end of the game. On Hard difficulty, it can be a nightmare especially if you didn’t horde resources to make the items needed to fight back.

Resource gathering and crafting still play a massive role in A Plague Tale: Requiem. Amicia must gather items to create various recipes alongside tools and resources to level up. A Plague Tale: Requiem does have an effective leveling system, if you engage in activity with combat you’re rewarded with combat-focused points and stealth awards points into stealth. This does make experimenting problematic but gives players rewards for their playstyle.

Stealth is still the best option when dealing with threats. The game will often have a lot of enemies in Amicia and Hugo’s path but you’re given more ways to deal with situations. Most encounters just require you to get to the steel door at the end, which isn’t always highlighted. But if discovered you’ll have to deal with the threat at hand. Unlike the first game, there’s no specific way to complete sections and the AI is more diverse in both pathing and searching. Such as noticing if a soldier goes missing or if the scout just happened to die. It’s much more dynamic than the previous game and requires a lot more planning.

Amicia and Hugo will have 3 allies during this adventure, each with specific talents. You have Lucas who can blind enemies, a soldier who can fight, and a smuggler who can cause distractions. Each time you have them in Amicia’s party the developers complement the upcoming section to take advantage of their skills. 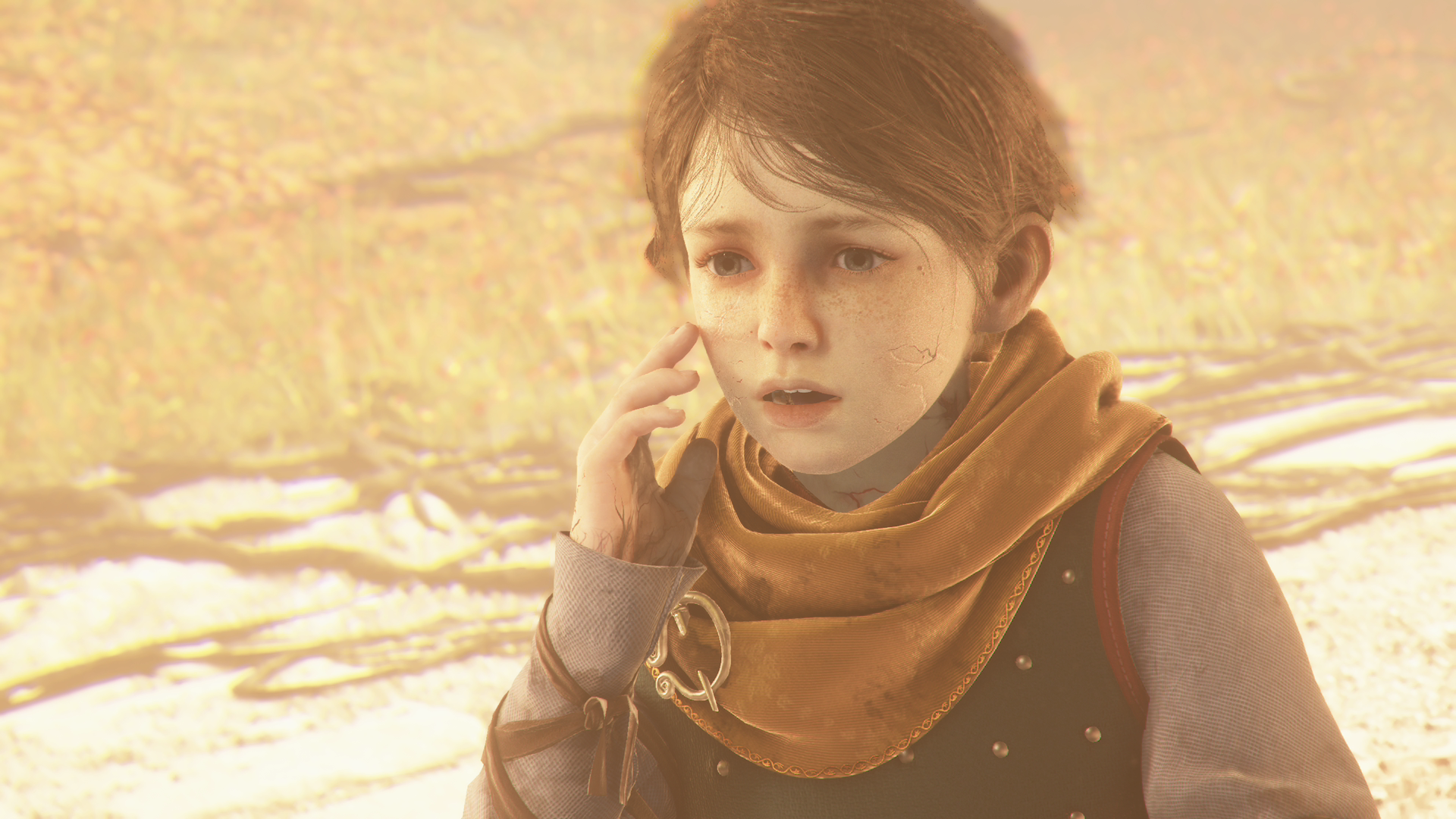 The world of A Plague Tale: Requiem is expansive and the game encourages exploration. Hiding chests with valuable items off the specific path, especially in the open island section. Adding to the mix are more collectables such as flowers and hidden story moments. Exploring these areas is definitely a treat but sometimes it can become tedious especially when combined with the game’s expansive length.

A Plague Tale: Requiem is much longer than the previous game but sometimes it can feel forced to increase the game’s length. Certain puzzle sections can feel unnecessary, for example, when evading a new enemy you have to enter a temple, but the door is locked despite there clearly being an opening on the left side where an entire wall collapsed. Once inside you have to drop a chandelier to break open the door within the temple to continue forward. This entire section could’ve been cut and reduced with no loss but situations like this happen a lot in A Plague Tale: Requiem.

The developers did use the increased budget to their advantage. The visual design and overall atmosphere of A Plague Tale: Requiem is exceptional. The rat count has ballooned and it shows when these deadly monsters give chase. This coupled with the incredible voice acting and choreography and A Plague Tale: Requiem soars in technical quality and amplifies the narrative. Alongside an outstanding musical score that goes beyond what the previous game offered. With larger stakes and deadlier consequences if Amicia fails this time around A Plague Tale: Requiem is a masterpiece in story design. 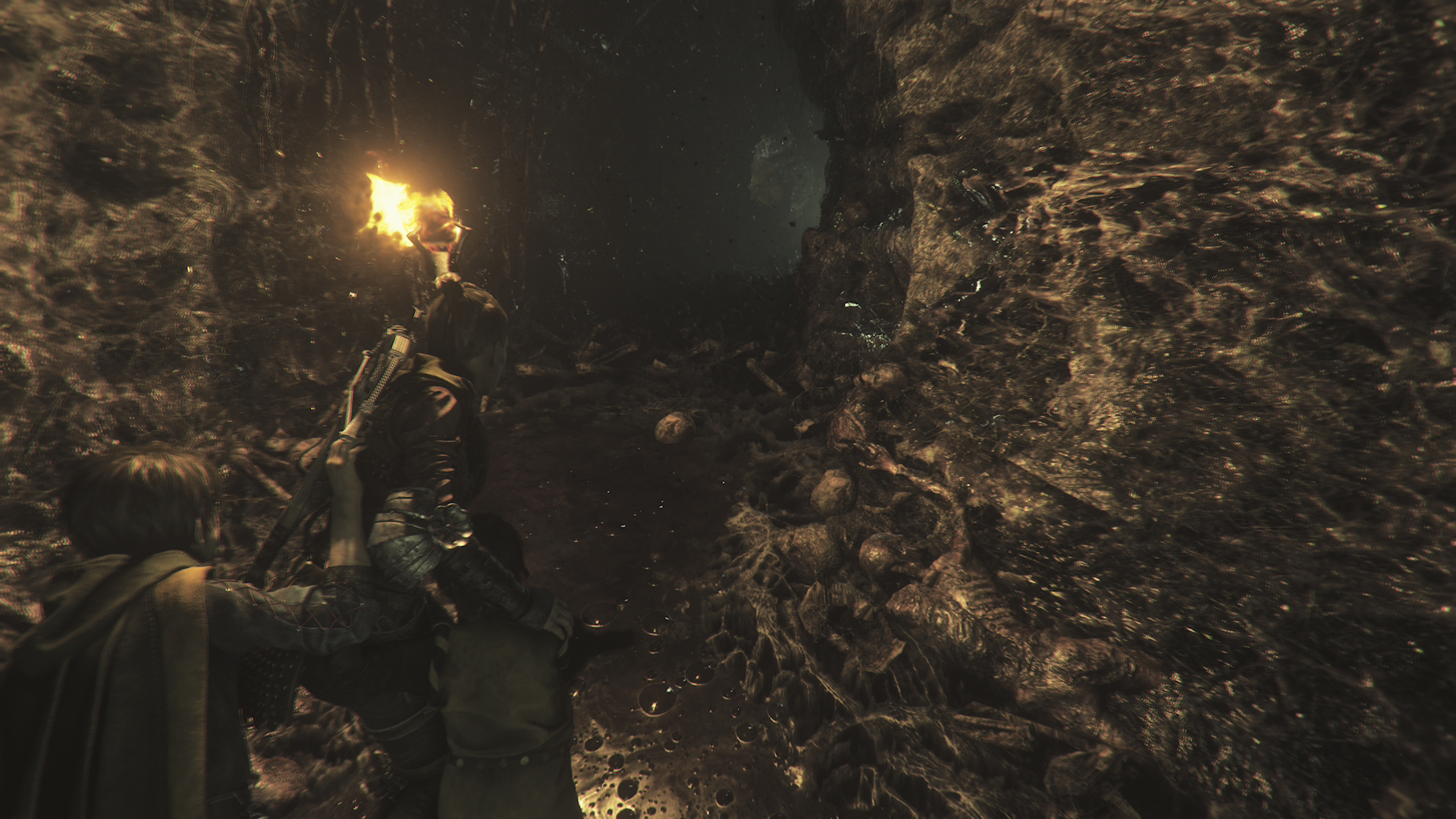 With a large game comes new technical problems. The most predominant was turning wheels, where the character model would just remain stiff the entire time. Other times the frame rate would drop during the open exploration section. These are not major problems and the game never crashed so likely they’ll be resolved in a few weeks.

A Plague Tale: Requiem is an outstanding sequel that goes beyond the original in always every way. The visual design, diverse environments, and outstanding performances create a near masterpiece of a story that ends with a cataclysmic end. However, you still need to deal with the problematic combat and padding is frustrating. Thankfully the developers did include a New Game Plus option so the second time with an Ultimate Difficulty option. A Plague Tale: Requiem is an exceptional single-player adventure that goes beyond the original and delivers an exceptionally dark story where hope is rare but cherished.