Marmalade. Milo. Jonsey. Spot. Goose. Garfield. Puss in Boots. Crookshanks. Orange tabby cats in pop culture have been some of the most memorable, and the adorable feline in BlueTwelve’s Stray is a worthy addition to the list. (Not to mention, orange tabbies have always held a special place in my heart.)

The concept of Stray is simple enough; you are a cat. This could have been done poorly, but BlueTwelve nails being a cat. (If you haven’t read it, this look at Stray’s real-life inspiration, Murtaugh, is adorable.) From knocking things off ledges and shelves, nuzzling up to robots, and taking naps in cozy places, you can get up to plenty of cat-related shenanigans. And it made me smile every time. 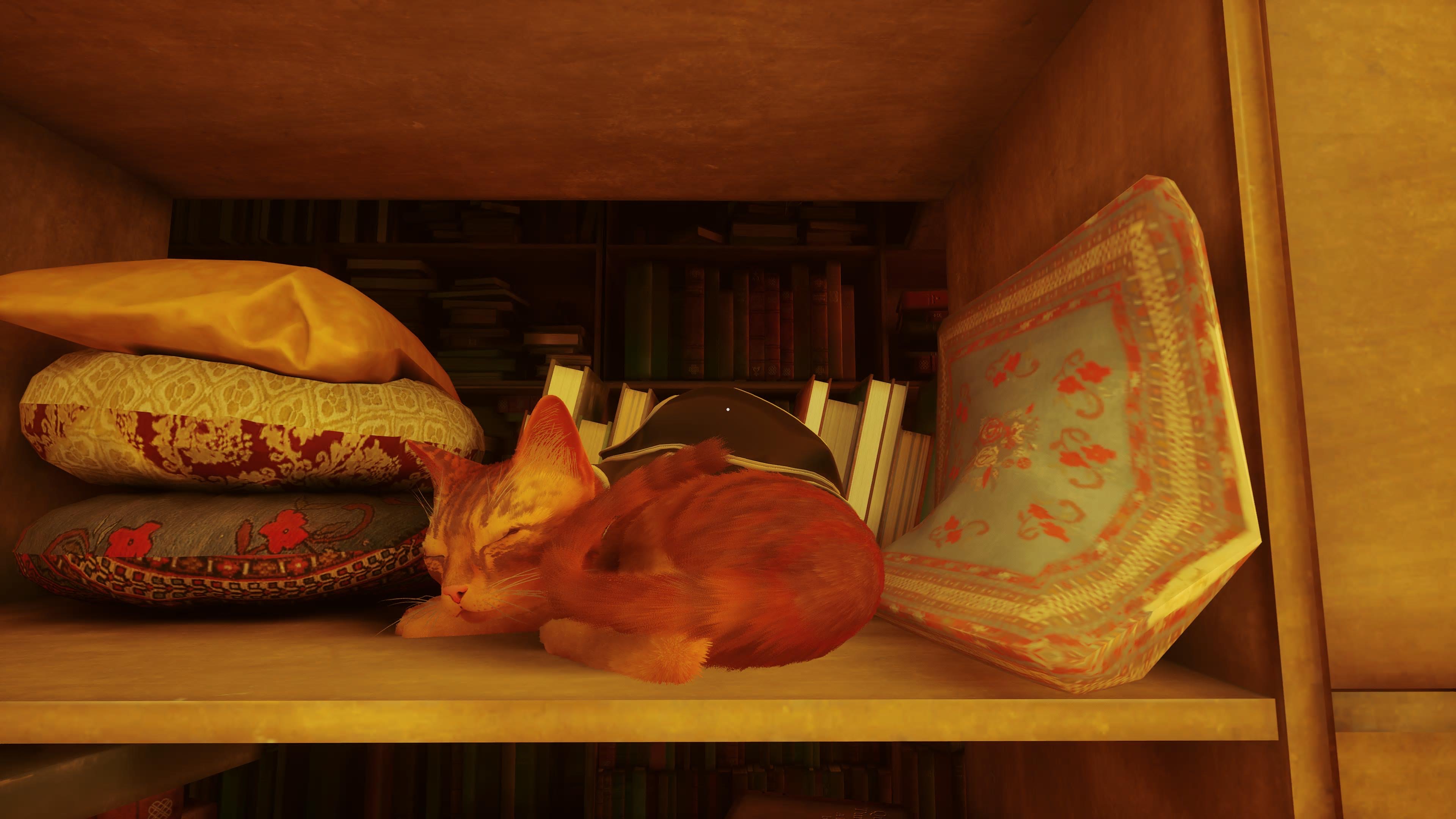 Tip: Let him sleep for an hour *wink*

Stray begins with a short ‘tutorial’ area, where you learn the basics of traversing the world. It’s a sad sequence at the end of that section that propels you into the story but also gives you your purpose. You go from outside, with trees, bushes, and sunlight, to inside, a dystopian cyberpunk-ish world inhabited by robots where sunlight and fresh air aren’t a thing. Most of these robots have heard of the outside but are either too scared or too pessimistic to really do anything about it. (At first.)

Your companion along the way is an equally adorable droid named B-12. Their relationship is what makes Stray tick. You’re attempting to make it back outside to your feline family, but B-12 is also trying to patch together his life and purpose, having lost much of his memory. Stray is as much his story as it is yours.

So, how does a silent protagonist and his droid friend save the world? You navigate the world by jumping on cabinets, tables, desks, building ledges, air conditioning units, scaffolding, and more. To my dismay, there was no dedicated jump button. I saw plenty of surfaces I knew I could have jumped on, but to jump, you must be looking at something you can jump on and hit the corresponding button to do it. By raiding vending machines and simple tasks throughout the map, you can acquire items for others, some of which you’ll need to progress the story.

Not everything about the experience was catnip, though. There were a few times when camera angles were not my friend, and there was the occasional time I would jump on a desk to only jump through the desk as I returned to the ground. And while the Zurks (a Flood-like parasitic entity serving as the antagonist for the first portion of the game) were an appropriately annoying enemy, I feel as though that part of the storyline was rather rushed from start to finish. 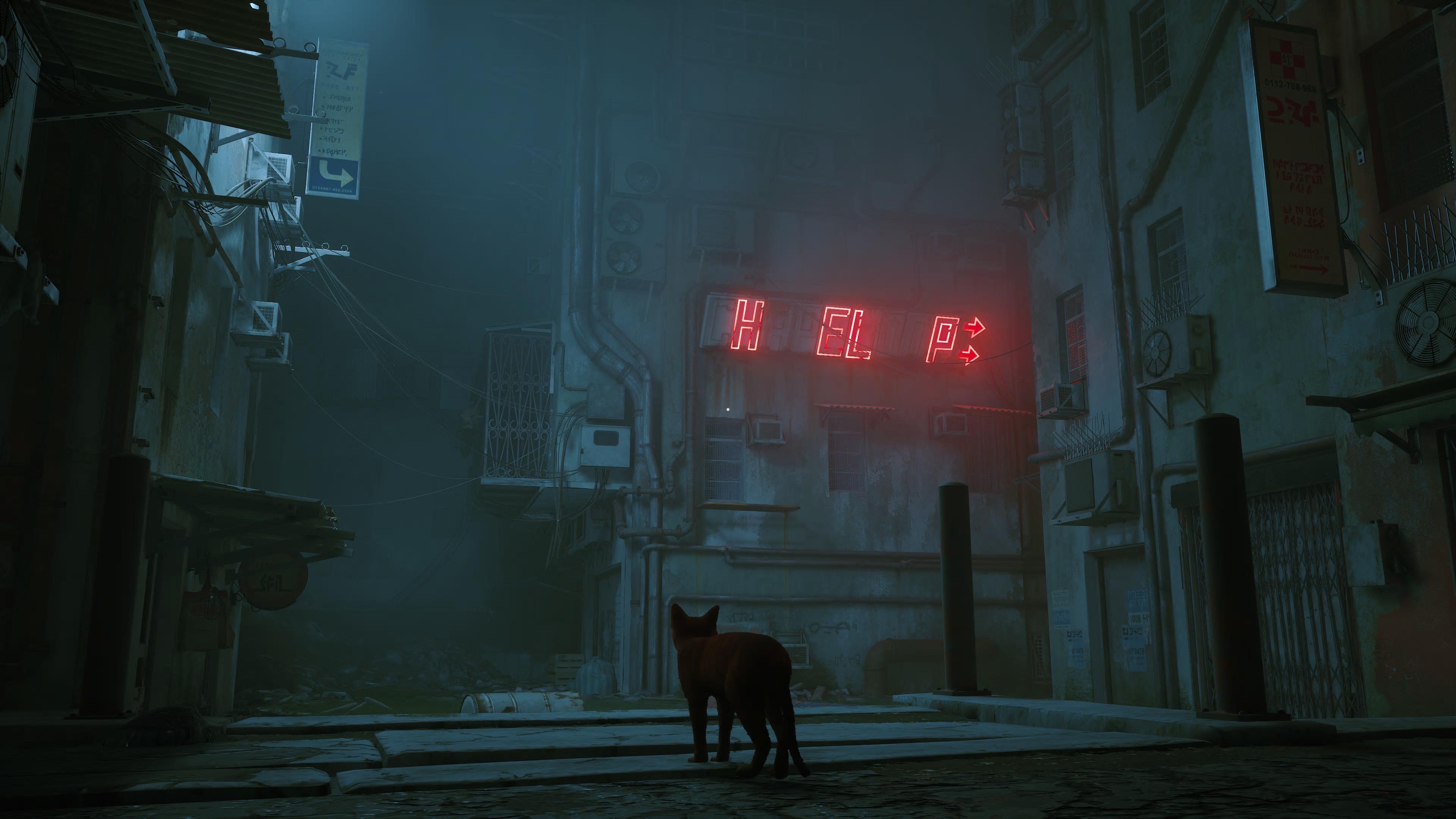 BlueTwelve packed a lot of lore and world-building into Stray

However, these critiques were a drop in the bucket compared to how much l loved exploring and learning about this world. The robots you meet could have been carbon copies of each other, but BlueTwelve took the time to give them distinct personalities, even just the poor robots living in the slums. Even the different areas of the city were fun to explore, from a dive bar on the lower level to a clothing store and nightclub on the next, and finally, the ending floor. (That I won’t say much about. Because you should play this game.)

For as long as I’ve been waiting for this game, it did not disappoint. Stray is BlueTwelve’s debut game, and what a debut it was. I spent (roughly) around six and a half hours on my first run. I didn’t find all the collectibles, or rather, B-12’s memories, but I discovered after going back to the start screen and selecting my save file I could go back to any chapter and find those.

No matter your favorite animal, Stray is a bite-sized adventure worth your time, with a world full of secrets to explore, places to take cozy naps, and robots to befriend. (Not to mention a killer soundtrack composed by Yann van der Cruyssen.) If you need a reason to stay in this weekend, do yourself a favor and treat yourself. 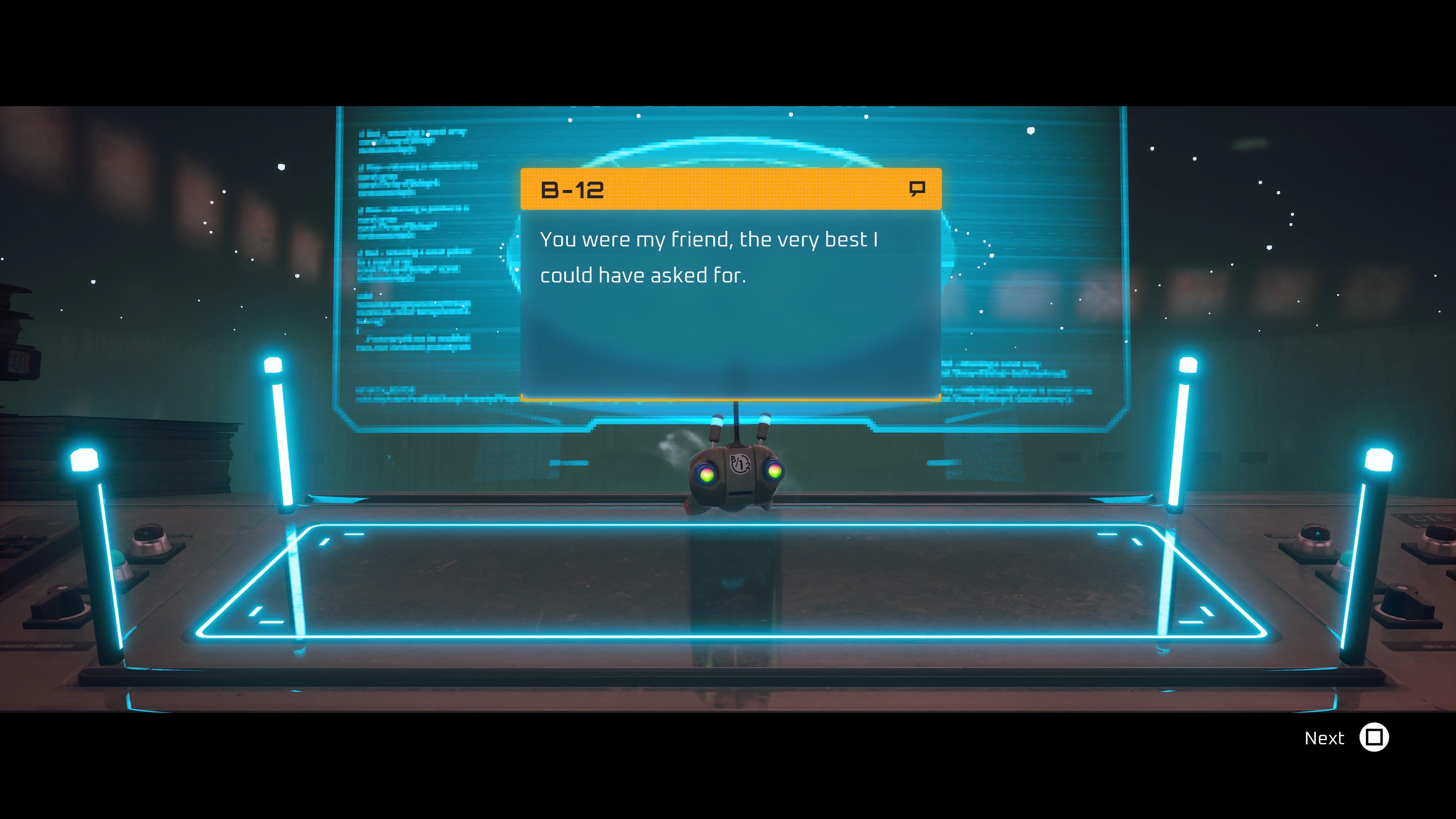