Neon White is an incredibly unique video game. The movement is astoundingly fluid and fresh. It rivals what Apex Legends brought to the table; it doesn’t quite hit that same spot but it is damned close.

Neon White tells an engaging and enjoyable story that has more bubbling beneath the surface that gets exposed the longer you play. It doesn’t hit every shot but it hits the important ones. If you’re looking for something that has demons, a splash of anime, humor and an amazing soundtrack, look no further than Neon White.

The initial set up for Neon White is a bunch of demon souls get pulled up to the surface of this lake every year. They kill other demons that get pulled into heaven for a point system and rewards. At the end of a ten day period the person with the most points wins their way into Heaven. There’s more than that though.

The Believers (a veiled authority in a false heaven) only allow the winner in Heaven for a year. Several of this years’ competitors actually all know each other. The player character Neon White has amnesia and doesn’t immediately recognize most of the other characters, however. During the course of the story, White learns that Yellow, Violet, Red and the behemoth Green were all in a gang of sorts with White. I won’t give much away but Green led them into a suicide mission and they all ended up dying. White has spent longer at the bottom of the spirit lake than everyone else has which plays a bigger part in the games final acts.

Green is the top demon and is basically the Believers’ guard dog. Much of what I have talked about along with several interesting twists and reveals are all revealed over the campaign. I bring this up because there are other side and major characters that have nothing to do with the gang but they all play their part in the main story. It changes from a game featuring a demonic take on a Death Race-style event, to a little more Heaven vs Hell, where did God go and why are these people in charge kind of game. 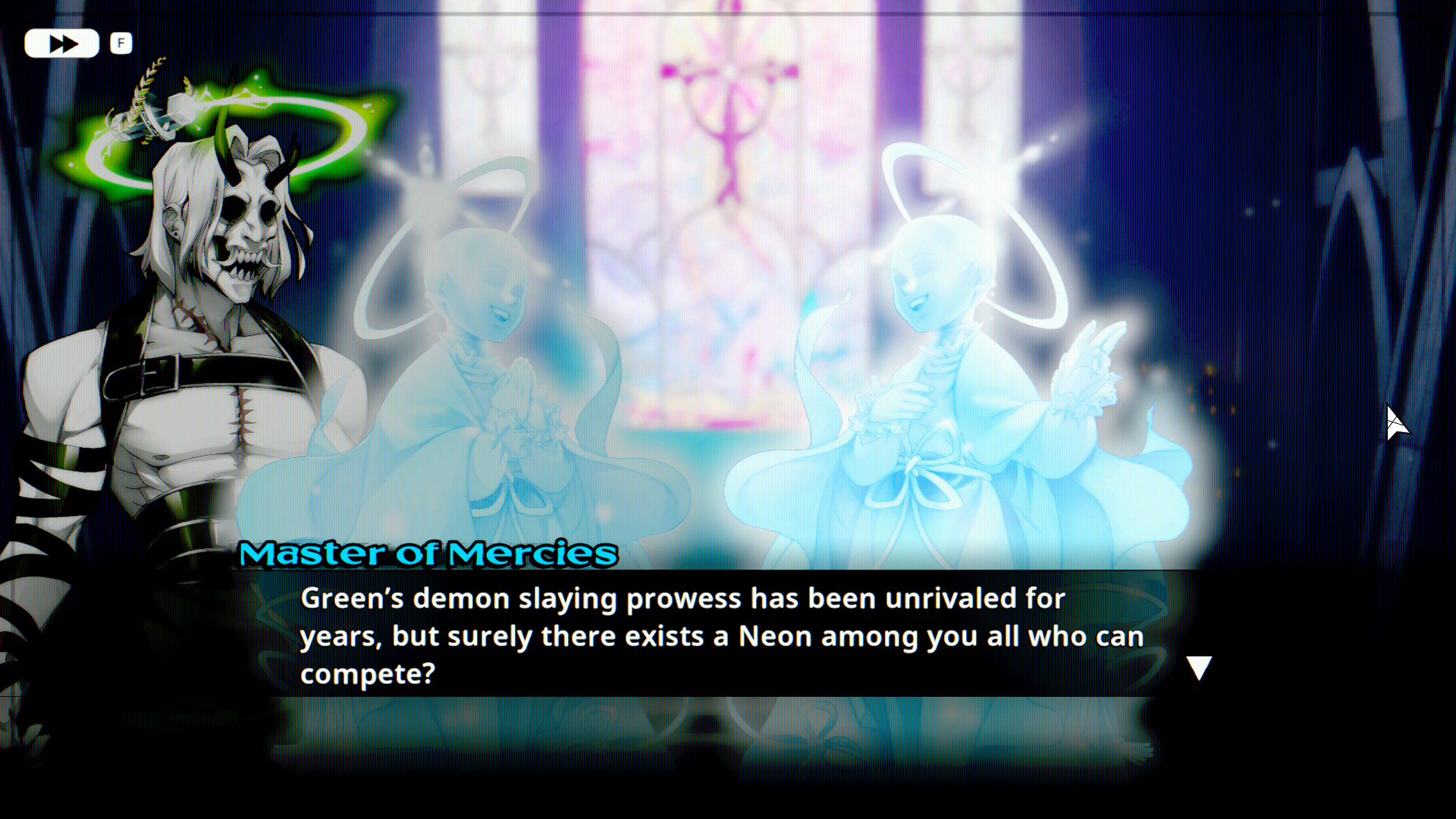 The minute-to-minute gameplay revolves around mostly short levels. You kill demons and grab cards to get weapons with the intention of getting to the end as quickly as possible. The more gold or ace medals you get the faster you climb through the ranks.

There are a few missions that have specific minimal requirement in order to play them but it isn’t super hard to reach those points. The game is framed around speed so every time you replay a level you can take any sort of short cut you can manage as long as you make sure to meet the minimal kill count.

The demons do vary in appearance. There are meatball looking ones that pop and can be used to get to higher places, imp ones that give pistol cards. there are more complex designs like a giant head that can one shot the player, pads that launch you in a direction. There are even mimics that will kill an unsuspecting player.

Neon White has so many minor things that help make the game stand out and make it an honest Game of The Year contender. From character interactions, to the special side missions you can unlock for each individual character, it all felt like it made the game more than “just okay.” It’s something special.

I felt compelled to go find the presents in specific levels to give to Red because I loved her relationship with White and I wanted to see if it would bring anything else between them. Even something as small as adding the fact that the masks the demons wear were made from fallen angels, and that allowed the Believers to kill the demons if they tried to go rogue. It added a needed level of depth to something that could have easily settled for something less. 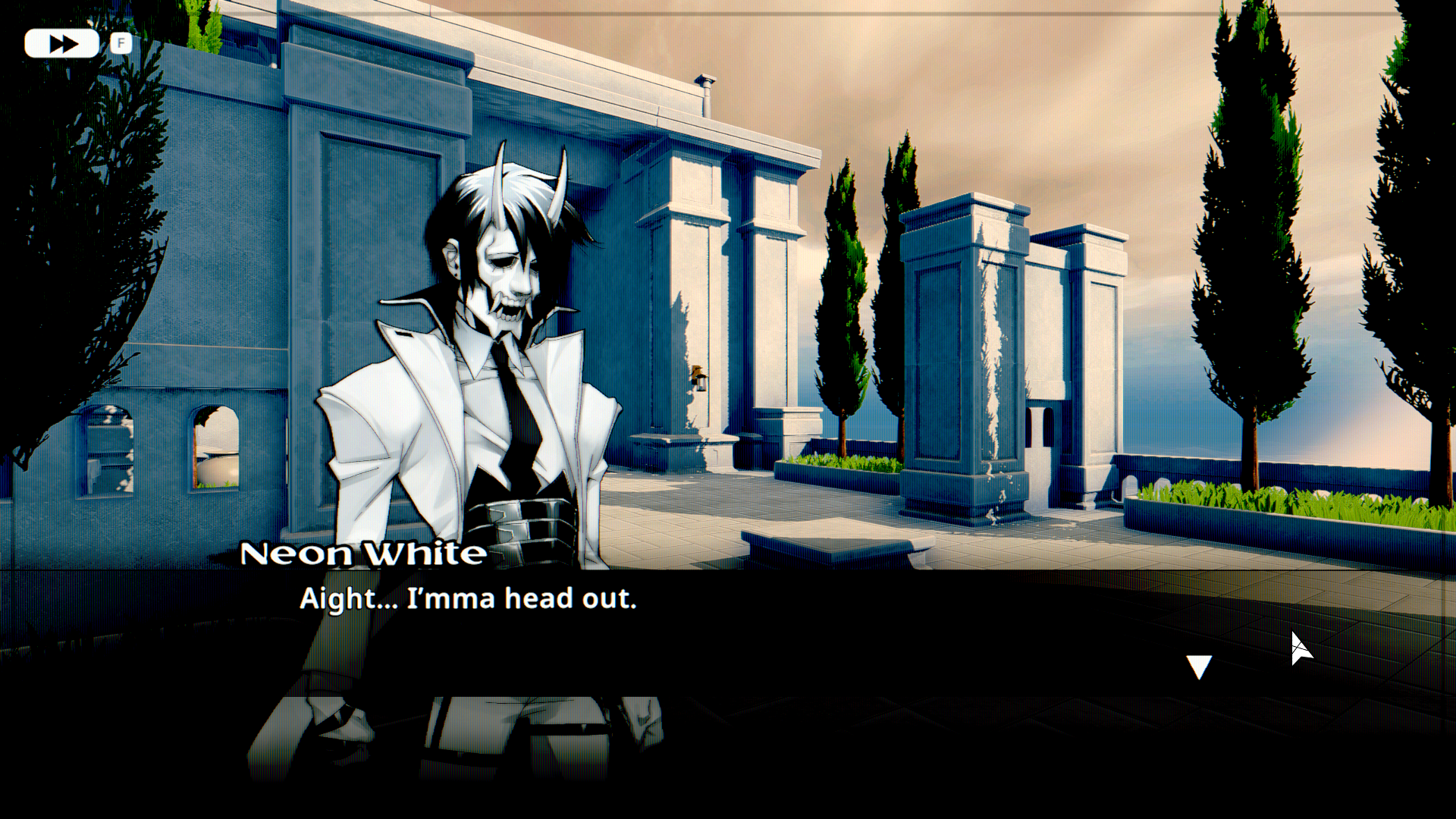 Tripped Over My Shoelaces-

There’s not much to not like about Neon White. There were some minor issues in gameplay where it felt like a pixel difference would ruin a level. For example, the dash with the sniper rifle would sometimes stop and I would just brush the wall instead of breaking it. That would usually result in having to start the entire thing over again which in most levels doesn’t matter since the game has pretty short levels. That being said, it was slightly annoying that I wouldn’t hit the button any later than I had been but somehow the action didn’t work properly. This didn’t happen often, but when it did, it was agitating. One other quick thing that I found annoying was the fact that there was no mantle mechanic. If I was close to a ledge and could clearly grab it, White would rather just fall to his death.

The other big grievance was the boss fights in the game; they all felt pretty similar. The framing of each fight was different in location and there were a few different things added to each one, but by the third time we fight Green it felt like a chore. Depending on the player, this spot can take up to five minutes of trying to bounce around an area hitting these glowing rock, dodging attacks and having near perfect reactions to deal damage. If you are even slightly off you get sent back to the start of the fight. This would be more forgivable if this was the only time this kind of thing happened but the previous boss fight with Green is exactly the same.

The location may be different, and the individual card/ability usages are changed, but you are still running this huge gauntlet trying to take out crystals and peck damage until you get to a sort of arena area and deal more damage. But in both instances he can just piss off and run and resume the gauntlet. It felt pretty tiring after a while.

On a smaller note, there were some pretty easy to read story beats. They revolved around one character in particular and it may just have been the way they are written. From the moment I saw her stalking us I was like “ah she’s going to screw this all up for us.” Then in a later segment I said out loud “this is the part where she stabs me, right?” and sure enough, she stabs White and runs off. I think a better way to phrase my grievance with them is to not make them such a cookie cutter troubled youth. Did it fit the theme, sure. Did it make sense, arguably yes. But I frequently couldn’t wait for them to be off screen any time I saw them so the rest of the story and cast could carry on. 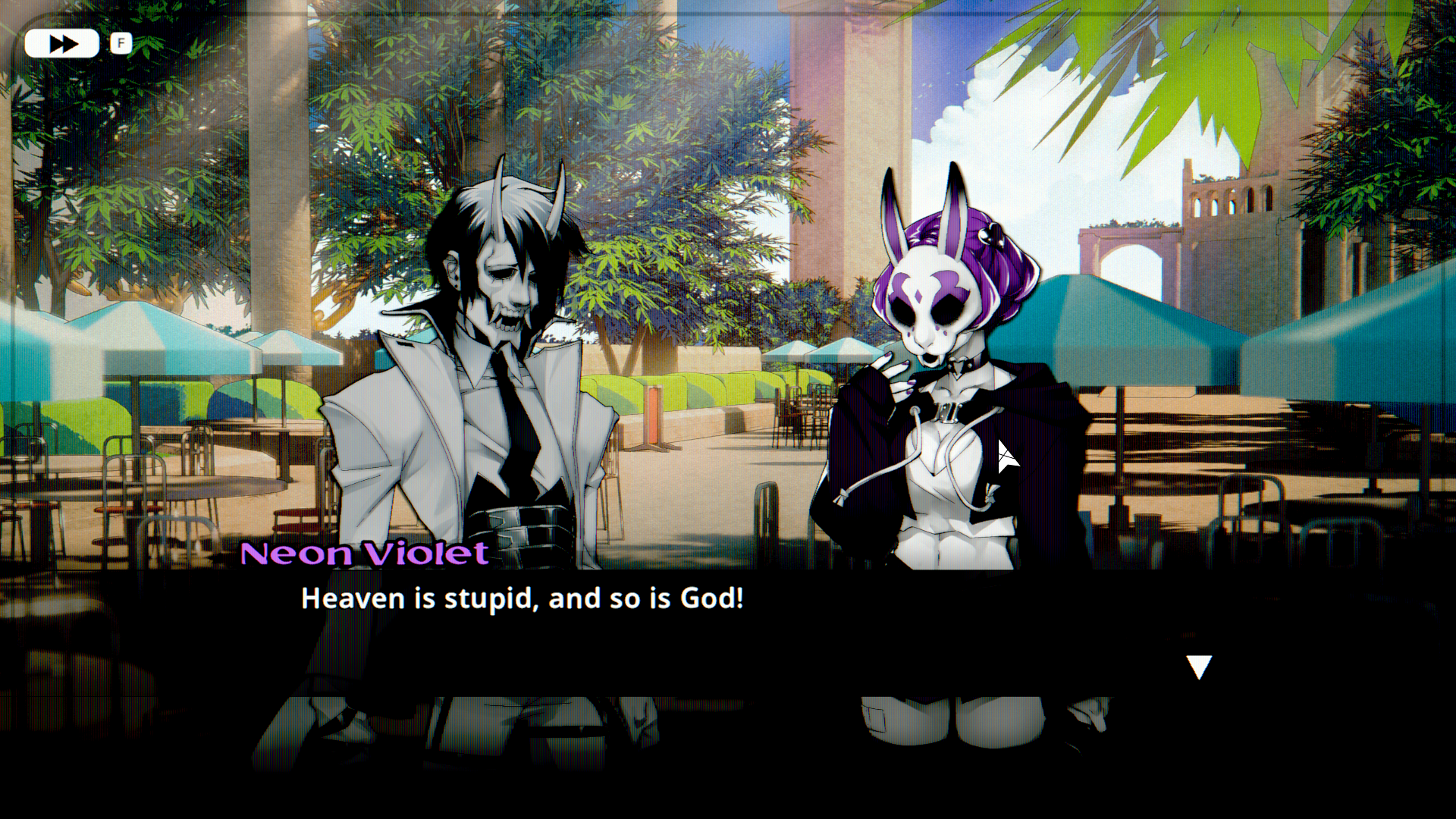 The above negatives aren’t enough to bring the game down very far. Overall the game has great combat, fantastic character design and it’s incredibly fluid. It works out superbly and I do recommend grabbing it. I don’t use the term Game of The Year contender lightly. This has been the indie game that has grabbed me this year.

I set down other games to come play Neon White because it was so easy to pick up and play. I loved the speed running rush of improving times and finding new ways to do something. Neon White is worth the money and is probably the best indie game we will see in 2022. It’s been a long time since I enjoyed a game so much I wanted to get a tattoo of something in it.