Death Stranding was met with a lot of mixed reception at its launch. Many enjoyed the game’s world and visual design but felt the delivery aspects didn’t deliver what many expect from a Hideo Kojima project. Despite these shortcomings the title attempted something new in an industry desperate for anything creative. Death Stranding Director’s Cut keeps the same mechanics and focuses on giving fans of the first one another reason to come back. 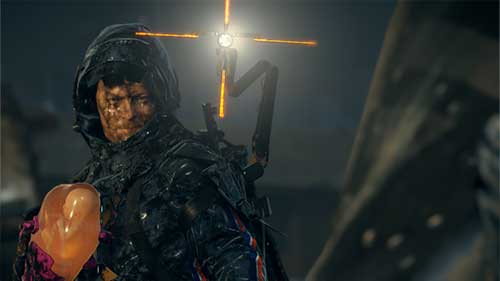 Death Stranding stars Sam Porter Bridges, a courier who delivers packages after the fall of humanity. Creatures caught between life and death called BT or breached things attack anything alive. Anyone who dies must be cremated or will cause a massive explosion. Worse is that a rain effect called timefall speeds up deterioration of anything it touches when falling. This includes organic and inorganic material, making couriers the lifeblood of maintaining the transport of necessary supplies.

Sam is a rare person capable of returning to life after death and has strong connection to the other side. After a mission leads to Sam reviving himself he finds out that his sister is still alive. Despite Sam wanting nothing to do with these things he agrees to save his system. All while connecting America through a special network called the Chiral Network. allowing instant communication and data transfer. Sam begins his journey to save his sister and reconnect America by building trust among isolated bunkers across America by delivering packages.

The major complaint about Death Stranding remains the constant unique terminology. Everything is given a specific name to explain what’s going on, such as DOOMS or repatriate. This is something Kojima projects are notorious for, especially in the Metal Gear franchise. Those new to Kojima’s games will understandable be confused or frustrated especially towards the end of the game. Where a tsunami of information, acronyms, and more is just dumped on the player’s head. Those who’ve played the Metal Gear franchise or Zone of the Enders are already aware of this style of story telling but newcomers will need to keep track of everything. Even then much of the story requires leaps in logic and connections but it so insane it’s good. 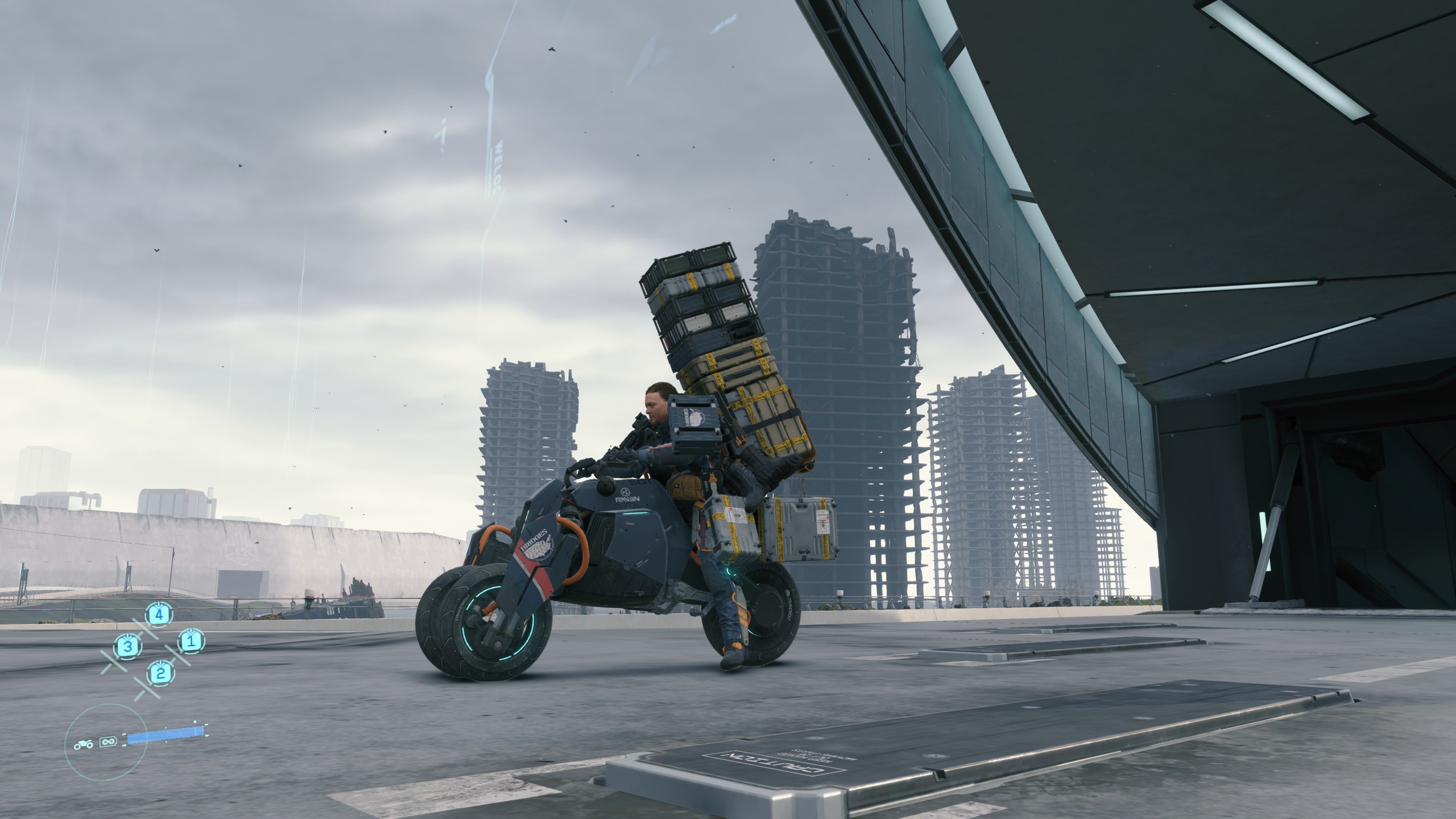 The core of Death Stranding remains delivering packages. This is not simple as the player must take into consideration every slope, river, rock, and ledge. You’re not a superhero and must plot you journey accordingly. The developers have included more mobility options to make delivering packages easier such as a better form exoskeleton or a literal cannon. Despite Sam acting alone he’s anything but.

Death Stranding’s biggest positive is the social media aspect. Other players can indirectly aid one another by leaving supplies and other structures to aid one another. The more likes something obtains the more it’ll spread to other worlds and remain longer. This sense of positive reinforcement encourages players to help out one another. Maybe you don’t need a bridge in a certain location but maybe it’ll help out others. There’s no way to negatively impact each others world but this system complements the theme of Death Stranding. You’re here to connect America and every courier is working towards that goal. Even picking up lost cargo from other players and delivering them.

These structures range from bridges to roads that makes traveling between locations much easier. However, getting this working requires a great deal of resources especially if you want it resistance to timefall. Since the rain happens throughout the environment your structures can be destroyed due to constant exposure making structures rare luxuries that can turn a 30 minute journey into a 2 minute ride. Sam does have access to trucks and a motorcycle but these operate on a limited battery.

Packages come in a large amount of options with varying weight classes. Some are durable with a can of repair spray needed to fix any problems and others are very sensitive, like a nuclear bomb. An auto-sort option is available to ensure Sam is carrying the gear accordingly but your gait is determined by a large assortment of factors. It’s not just weight but speed and position, one small slip and you can lose everything. At the end of each mission you’re given a score based on your performance and sometimes this will yield extra bonus items.

Death Stranding focuses on a lot of backtracking. Not everything trust you, especially the organization you work for, BRIDGES, or the new American government called the United Cities of America or UCA. America has essentially fallen and most people live in large underground cities away from the timefall or in isolated bunkers. To connect certain bunkers Sam will have to undertake 1 or multiple missions to build a relationship. This means going through the same areas but not every trip is the same thanks to BTs. 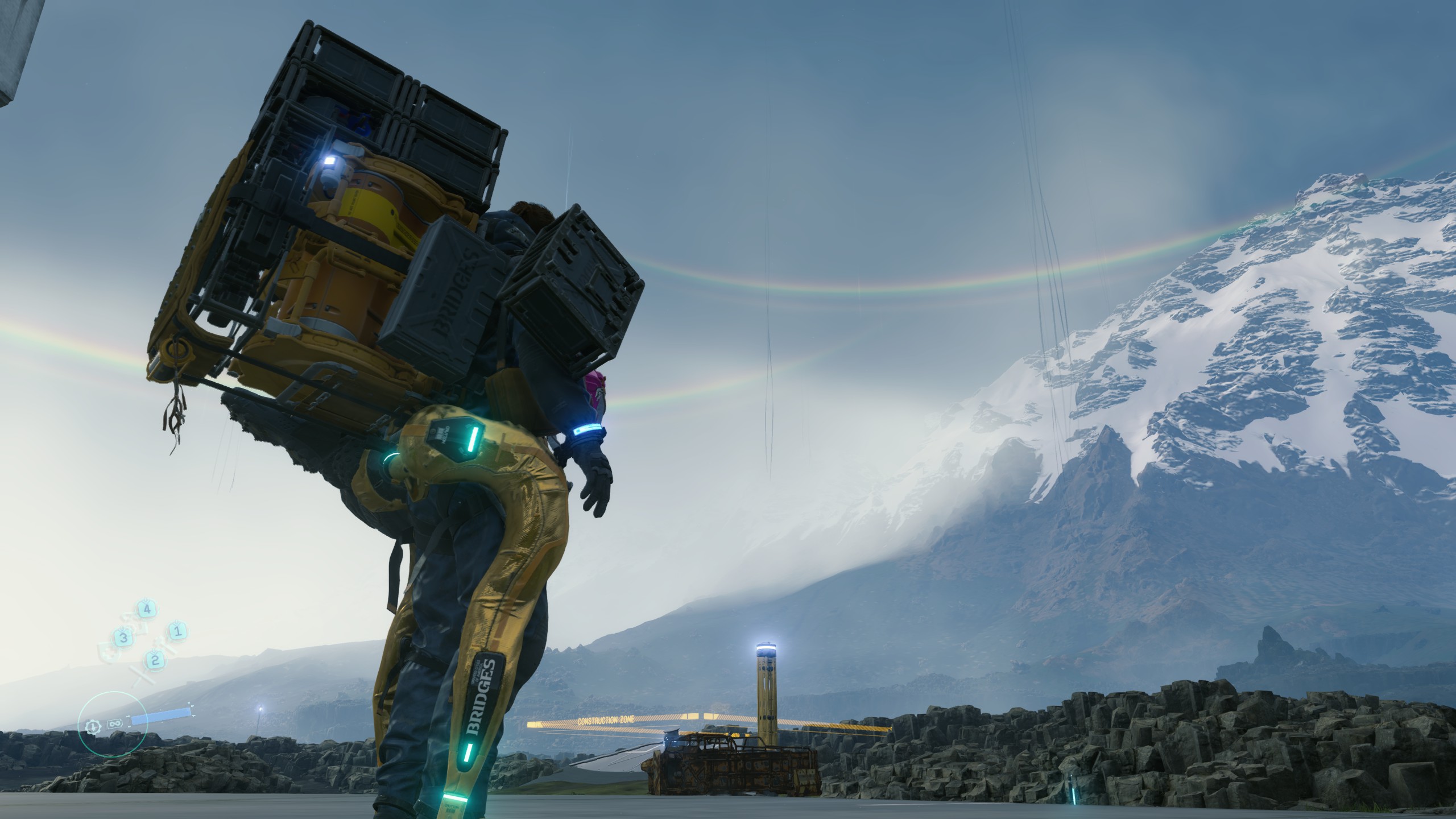 Breach Things or BTs are deadly creatures unable to pass on and stuck between worlds. They hate living things and will attack anything on sight. Same must navigate these dangerous areas, indicated by black rain or snow, using an Odradek and your Breach Baby. The Odradek is a radar that points towards the nearest BT and flashes based on how close it is. Your BB allows you to see the BTs but only while standing still and later on can kill them by cutting their chord.

These encounters were once see as minor inconveniences because players found out you could trigger a boss fight against these encounters and clear the area once completed. The developers decided to increase the boss difficulty of these boss encounters so they’re more dangerous. In addition, BTs are more sensitive and prone to detecting Same this time around. Making BT encounters more tense.

The other encounters are against Mules. Human enemies who own certain territory and attack Sam for his packages. Since voidouts are triggered by dead bodies Sam has more non-lethal options available to him this time around. Overall combat has been improved dramatically but if you do use lethal force voidouts are possible, causing massive shifts in the environment. 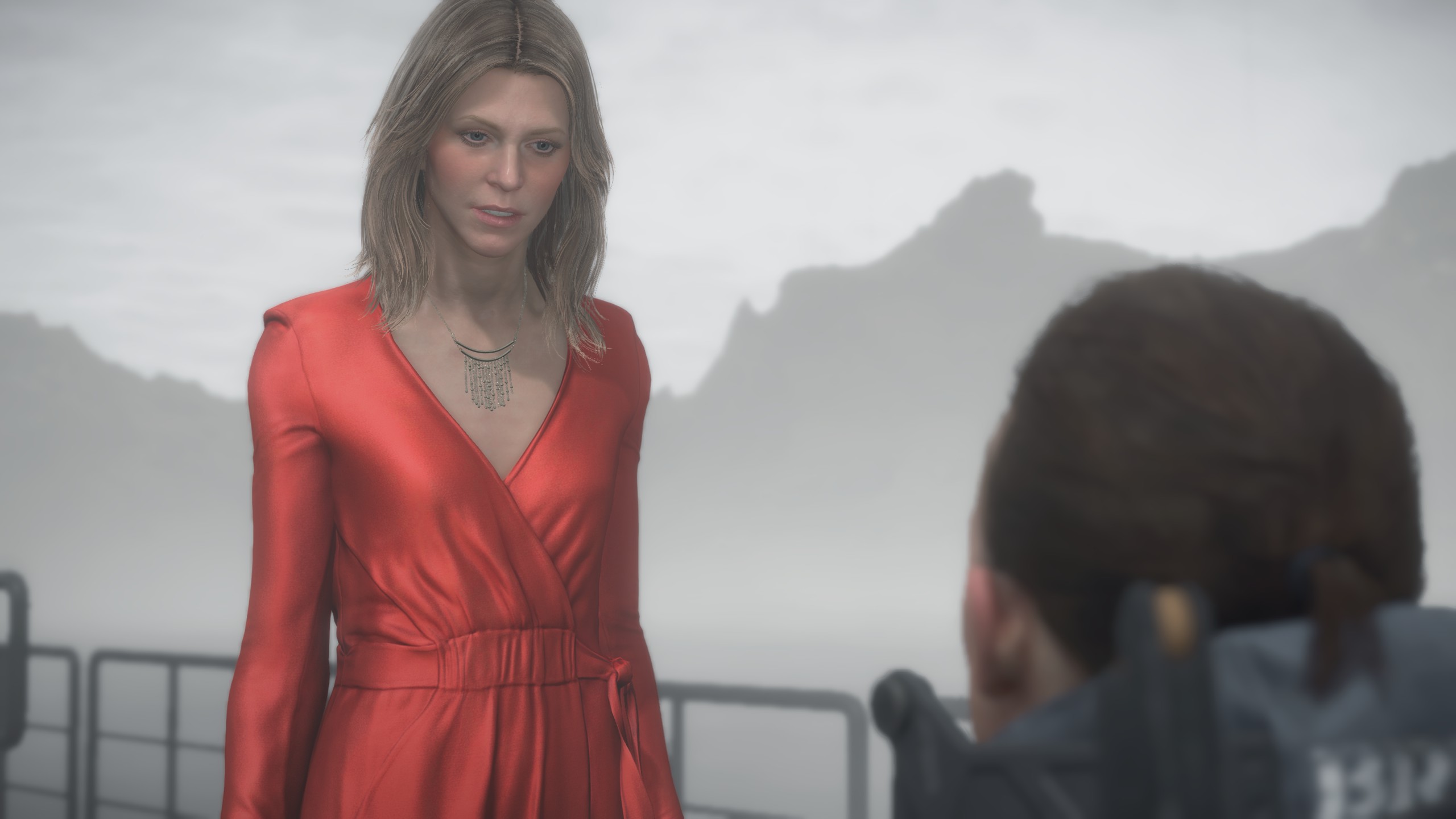 Sam will be placed into heavy combat encounters occasionally. These are game specific and require Sam to shoot and kill but free from consequences. These sections are insanely wild with huge cinematic battles and giant explosions everywhere. It definitely a contrast to everything you’re going but also provides some well needed rest from focusing on path efficiently and package maintenance.

The developers went even further with these encounters by including brand new areas only populated with humans. These dungeon areas have you sneaking, Metal Gear style, through enemies and attempting to get away with the loot. It’s definitely a breath of fresh air from the open world delivery.

This doesn’t mean that Death Stranding is an easy game to figure out, there’s a lot to learn. The game constantly has techniques and new things to learn to get the best rating or just progress. In execution that game seems simple but as you play new options open so many possibilities that it can be overwhelming at things. One glance at the tutorial screen it enough to scare the player but when playing many of these tips are unnecessary. 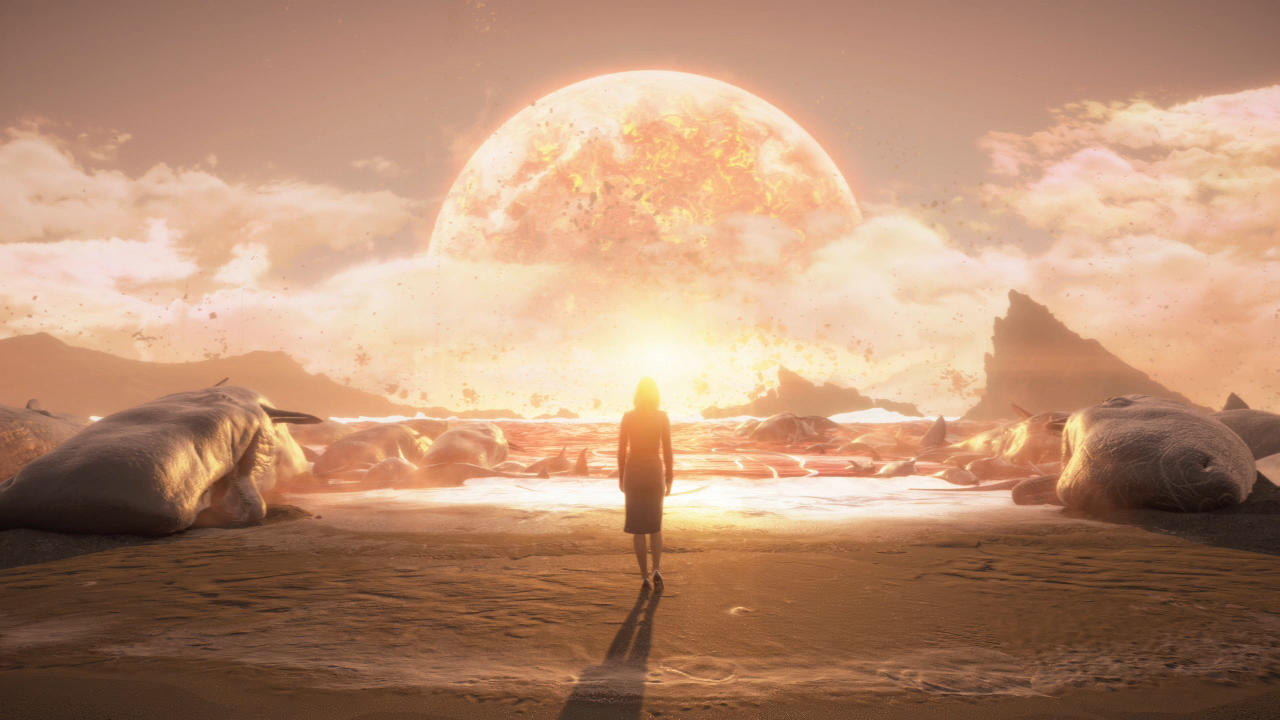 Sam does need to rest and recuperate to regain his composure. Private rooms is where Sam can rest and stock up on bodily weapons. Since Sam is infected with DOOMS his urine, oils, and fecal matter are deadly to BTs which is just comical to use. This is also where Sam can customize his gear and items he wears along with drinking enough BRIDGE Energy to start a car. Guess that Monster Energy promotion ran out and now Sam’s energy canteen fills with BRIDGE energy when standing in a stream.

Death Stranding’s visual design and presentation remains outstanding. The world doesn’t tell but instead shows how everything has changed. Most of the trees and wildlife is gone, with only things that can lives hundreds of years and reproduce quickly peppering the landscape. Trees are extremely rare and when in timefall you can see small plant-life growing and dying within seconds. It shows how much care went into this world but highlights how the people living in it are so accustom to it that explaining it isn’t necessary.

The game’s character design and boss encounters are still exceptionally well design. The developers went above and beyond with the voice-acting, cast, and character models with big budget actors and the best VOs in the industry. Norman Reedus definitely shines through compared to rest. Fragile is hit or miss, her voice-work is great but her dialogue isn’t. Often coming and going to the point of being annoying and often repeating the same phase over and over.

That being said Death Stranding has a wide collection of excellent original and licensed music. The issue being that streaming or making content for Death Stranding comes with a lot of risks. There’s no option to replace these songs or turn them off as seen with Ubisoft games or Marvel’s Guardians of the Galaxy. 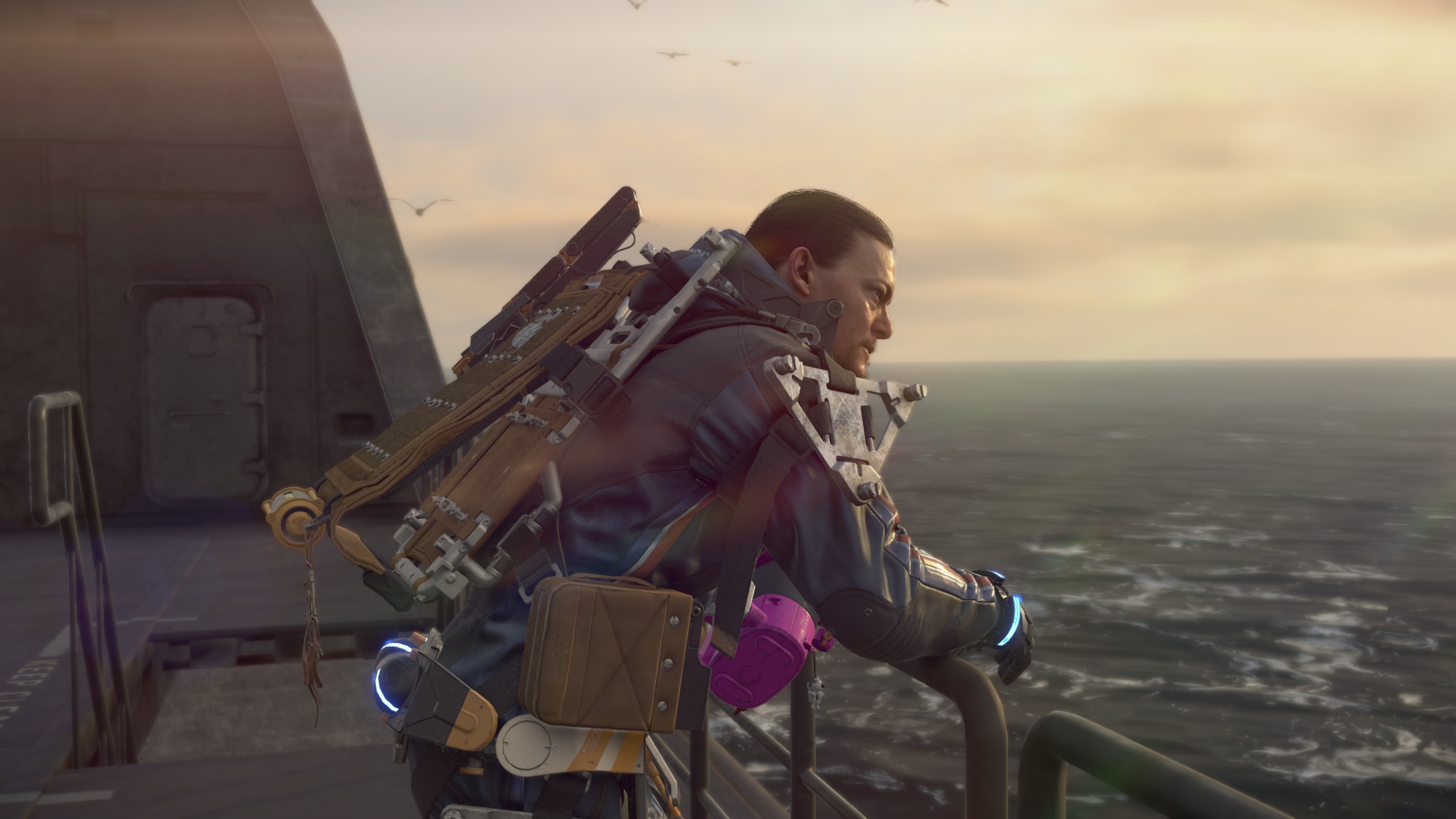 Death Stranding Director’s Cut is clearly made for those who enjoyed the first game. It’s not meant to change the minds of those who didn’t enjoy the first version but adds new elements to make the delivery system easier. In an industry where creativity and trying something new is rare Death Stranding decides to go against this path and dares to be different.