Ghostwire: Tokyo opens with a lot of promise. A city wiped out, demons roaming the empty city streets, and the supernatural made real. Dripping in atmosphere Ghostwire: Tokyo excels in presentation and visual design but falls flat in open-world design and repetitive design. If you can endure the constant grind Ghostwire: Tokyo provides an exceptional journey that ends with a humble message. 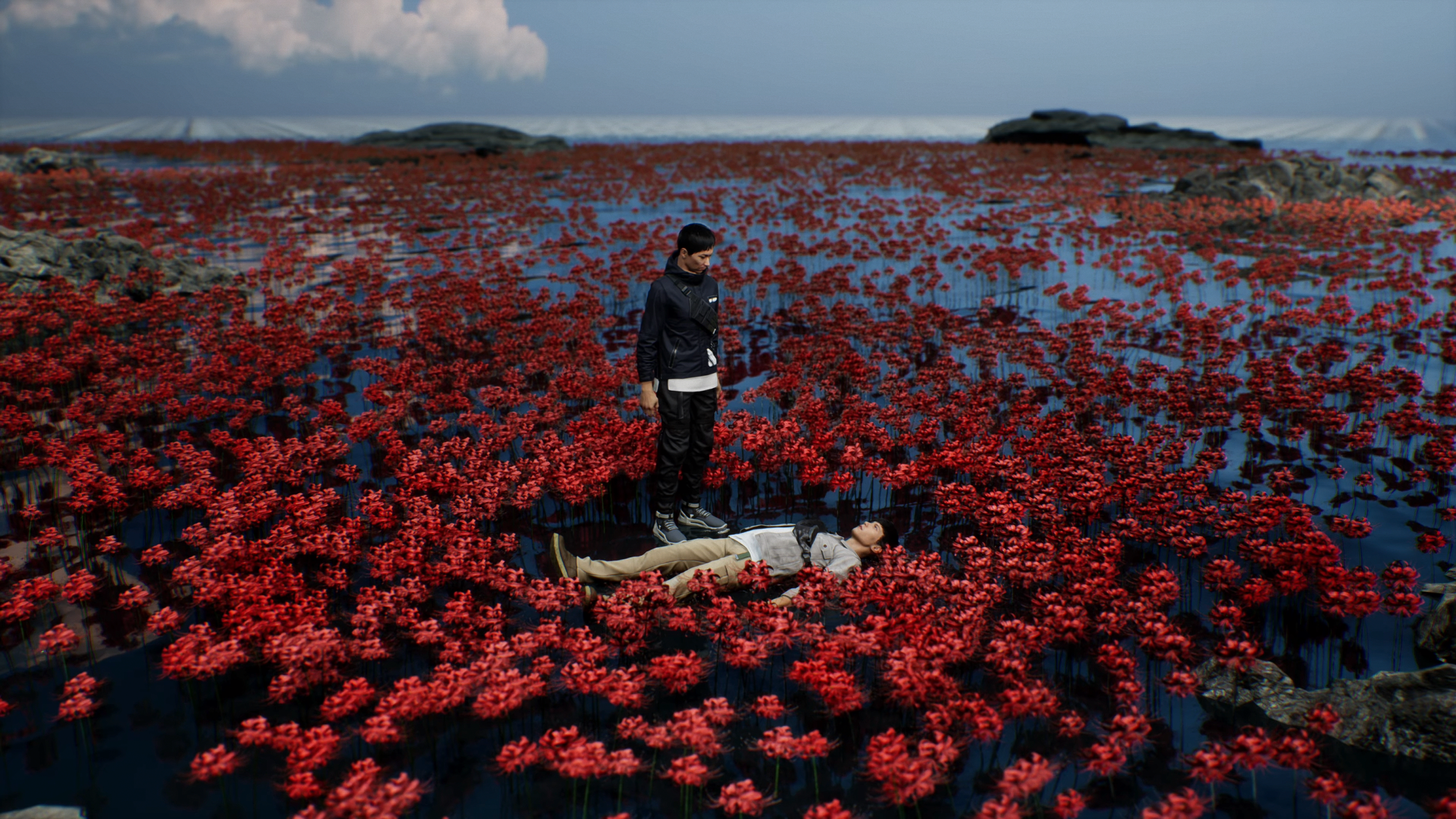 Ghostwire: Tokyo opens with Akito, a seemingly random person who gets possessed by a wraith. This wraith is named KK and is the only thing keeping him alive as all of Tokyo disappears after the mass vanishing. The negative emotions left behind by regrets, exhausted workers, and angry specters have created new horrors that Akito must fend off. Learning that his sister has been kidnapped Akito must find her at all costs.

KK needs Akito’s body to use his powers and Akito needs KK to save his sister. The 2 form an uneasy alliance but eventually the 2 become partners in this deadly journey through Tokyo. They’re 2 contrasting personalities sharing a body for individual agendas at first but develop a bond quickly. KK has control of Akito’s arm but cannot force Akito to do what he wants since he needs to be alive. The 2 eventually build a relationship out of common goals but it seems rushed. Unlike Johnny Silverhand and V from Cyberpunk 2077 or Kaine and Tyrann from Nier Replicant, the relationship is built on the 2 being good people from the start. Sometimes conflict rises up but it’s not out of conflicting personalities or goals. This was a missed opportunity to create depth for each character, fighting for control and creating split decisions on how to handle things. But since both have the direction and similar ideals few issues arise. They still have a believable partnership considering how much each does for one another but it’s not that interesting or gripping.

Akito and KK are single-minded in their goals. Akito wants to save his sister but also wants to help those in need. KK is mostly the same, he wishes to help and shows this during much of the adventure. You’ll learn about KK’s past and previous co-workers as KK’s life intertwines with the tasks at hand. It’s during the finale of the game where Akito really develops though, highlighting his avoidance of facing traumatic moments in his life. Eventually growing as a person and KK helps in that, keeping Akito moving forward even when he breaks down. But all of this happens in the finale of the game which makes much of the journey feel like filler. 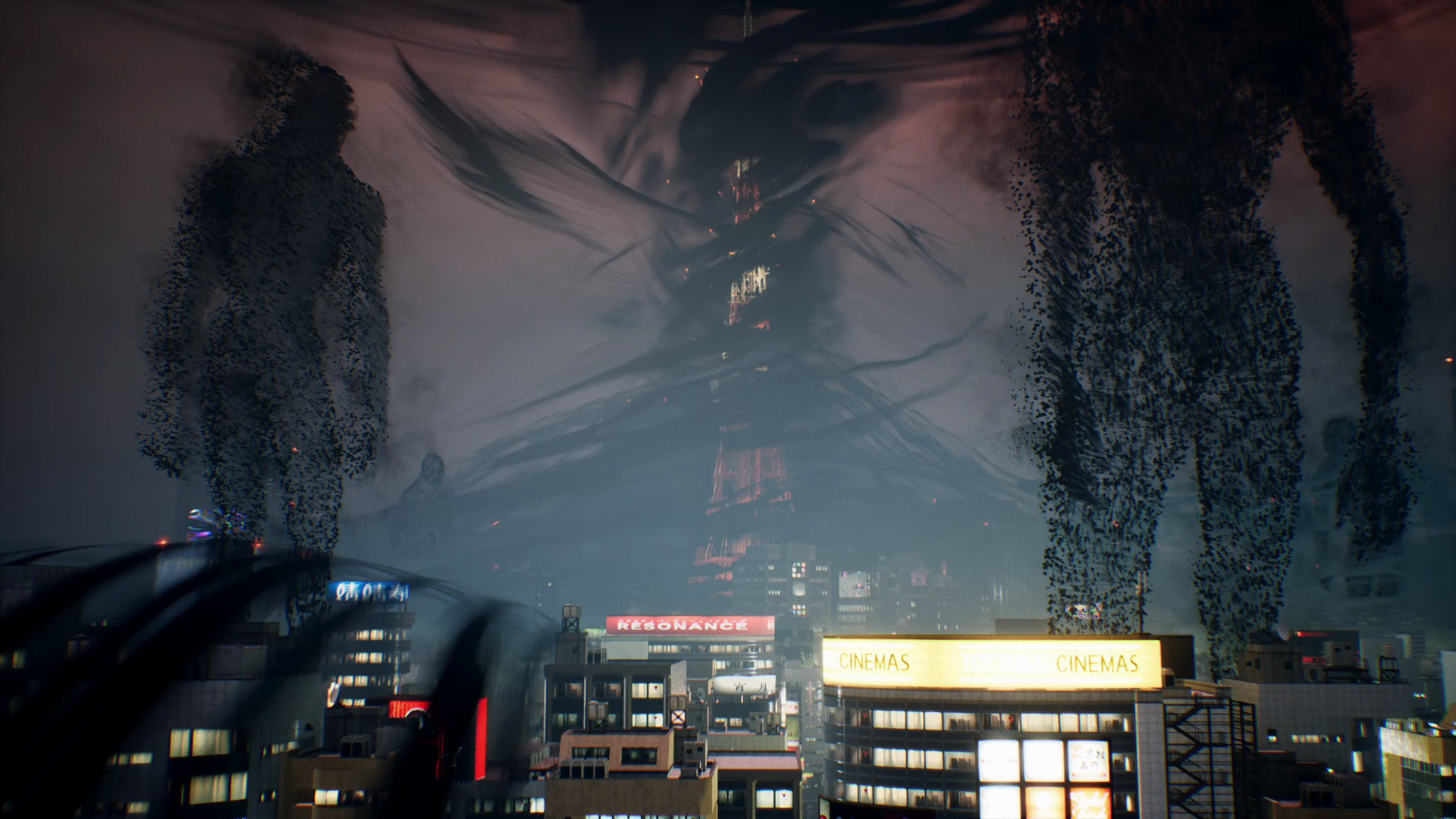 Despite having light experience in open-world design with The Evil Within 2 Ghostwire: Tokyo takes heavy inspiration from Ubisoft’s games. The game is teeming with repetitive tasks that grant experience and allow Akito to upgrade his abilities. Objectives include locating Tanukis that hide as ordinary items, shrines to pray at, yokai’s to capture, gates to cleanse, destroying spiritual trees, and side missions. The side missions range from boring kill the target to impressive visual affairs. Some have you getting toilet paper or killing Visitors and other times you’re hunting a former serial killer or dragon portrait that decided to come alive. It’s definitely a mixed bag of content but leans more towards doing the same thing.

The most significant are spirits that you gather and deposit to earn a large experience boost. There are so many of these and you’re going to spend a lot of time gathering these, to the point it brings back horrible memories of Prototype and Crackdown. After completing the game and starting a new file you gain access to a special item that automatically deposits these but during your first playthrough, it’s a vexing system of collecting and depositing. Be prepared to climb onto the roofs of these buildings and fly across them for hours gathering these, especially if you want that platinum trophy. You eventually gain access to an ability that makes this easier but it’s still a chore to do.

This is a major problem in chapter 4 where the game developers clearly had no idea how to incorporate these optional tasks into the story. This entire chapter deals with you cleansing over half a dozen shrines to push back the fog from your distinction. It’s literally busywork just to force the player to cleanse these areas, which many would naturally do at the beginning of the game if it didn’t artificially lock them until you reach a certain point of the game. The game purposely locks you out of areas with the deadly fog and prevents you from accessing shrines to get to those areas.

Akito can highlight items of interest if you’re having difficulty locating key items or finding ether riched deposits. For some reason, everything is highlighted using the same hues, which is problematic when locating optional key items. With so many ether deposits, having to locate 1 item by a tower that could be anywhere just becomes an annoying hunt.

The shocking part of Ghostwire: Tokyo is that the game is utterly beautiful. The environmental design is exceptional and going through the streets of Tokyo and finding the victims of the vanishing possessions just littered around is unnerving. Everyone is just gone in a few minutes and whatever they were doing was left behind. Messages, clothes, deliveries, crashed cars, and other pieces of people’s property are just lying about. The fog didn’t affect the animals so you can read the minds of the cats and Shiba Inu, but only the dogs will help with getting supplies and yes you can pet the animals. 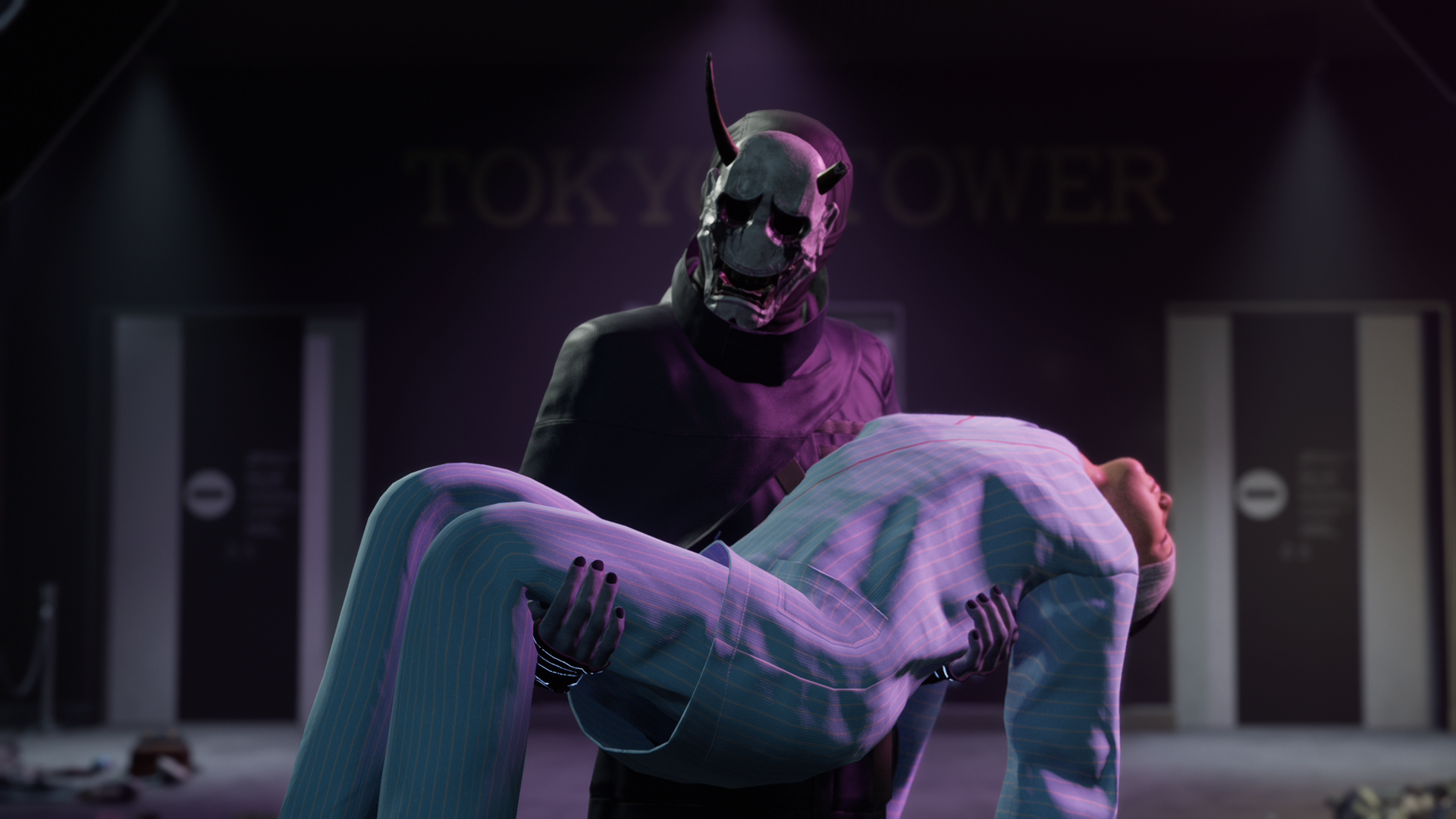 Combat is basic, you have 3 elements that act as your basic attacks along with a bow and multiple talismans for special attacks. The elemental attacks include a wind attack that shoots projectiles, a water blast that does heavy close-range damage, and a fire attack that works like a grenade when charged or a high-power rifle. Each element uses ether and must be recharged by destroying ether charged items or by defeating enemies. The bow deals heavy damage and talismans come in multiple varieties such as stun, exposing enemy weak points, and bushes for hiding.

Combat includes both active and stealth. Stealth is basic, just avoid detection and if you’re behind an enemy you can deal heavy damage, instantly killing weaker enemies. Active combat plays like a first-person shooter, swapping between each element to deal damage to expose the enemy’s core. Once exposed you can purge the enemy’s core or deal more damage to kill it, with purging rewarding more ether. Purging is a lot of fun, especially when chaining multiple cores together.

Outside of KK’s powers, Akito can use talismans for stunning, exposing cores, or creating a hiding point. Akito’s bow can deal heavy damage but requires some training to use. All of these talents can be upgraded using the skill tree that boosts the speed of absorbing spirits, easier mobility options, better combat options, and holding more items. 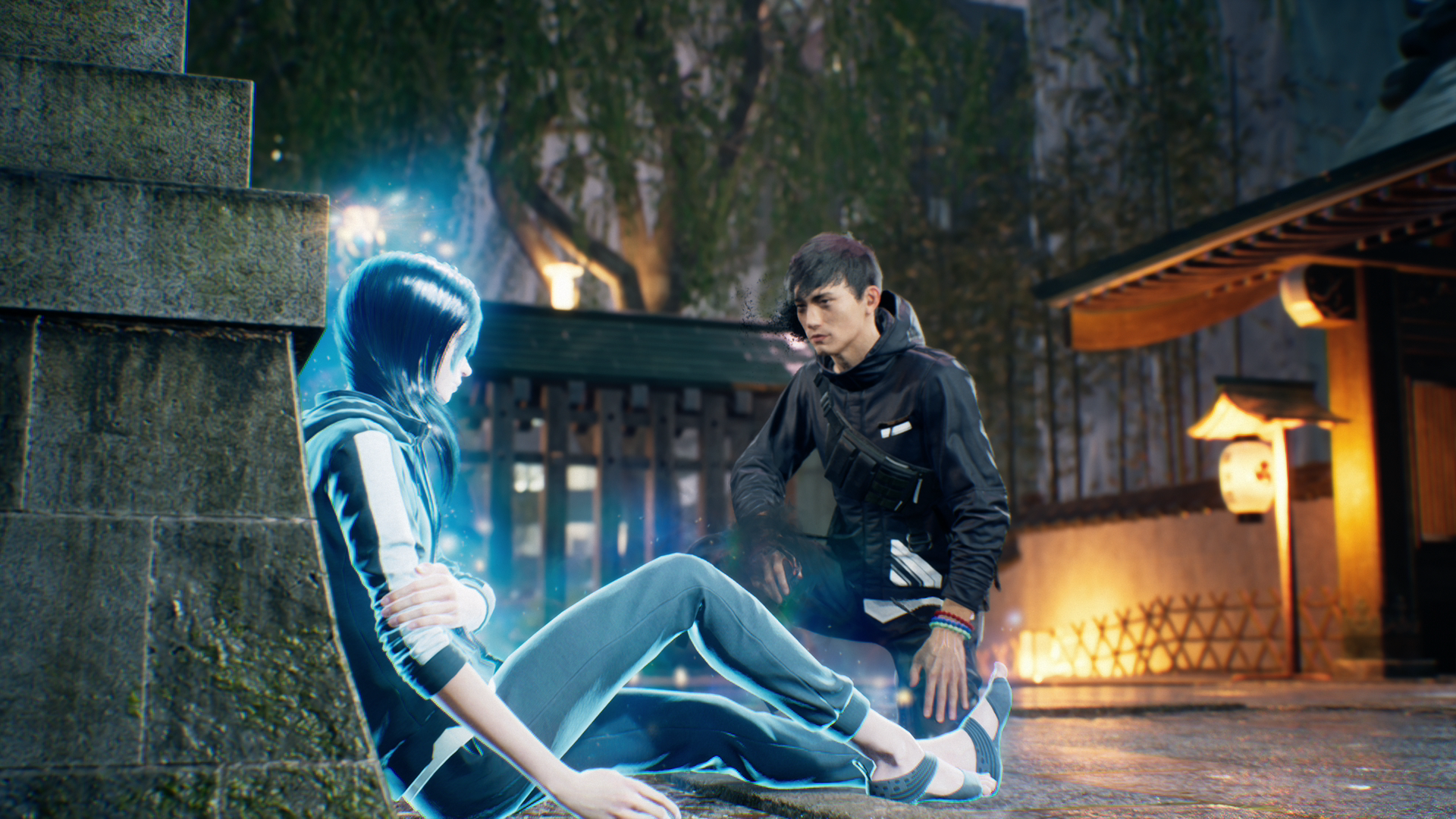 Defense is limited but Akito can summon a shield. Holding the shield reduces the damage but performing parries is paramount. When performed correctly you can stun weaken enemies or completely avoid damage from heavier attacks. It’s not a hard system to master and the game gives a large window to perform these.

Akito’s primary way of healing is through food. This can be purchased from shops owned by Nekomatas, yokai 2-tailed cats, or found in the world. Some foods are more nutritious and offer more healing or temporary benefits but Akito can only eat 1 at a time with a cooldown after each use. Unless you play on the hardest difficulty just stocking up on the best items and eating them works.

Akito can change his clothes for cosmetic purposes and use beads to increase his combat abilities. These beads are found in cleansed shrines or by completing searching tasks for Nekomatas. Akito can be upgraded to equip 3 of these to boost an array of abilities. As for the cosmetic options, these are earned through completing missions and you can equip them at any time. With the clothes change Akito’s model during cutscenes as well. 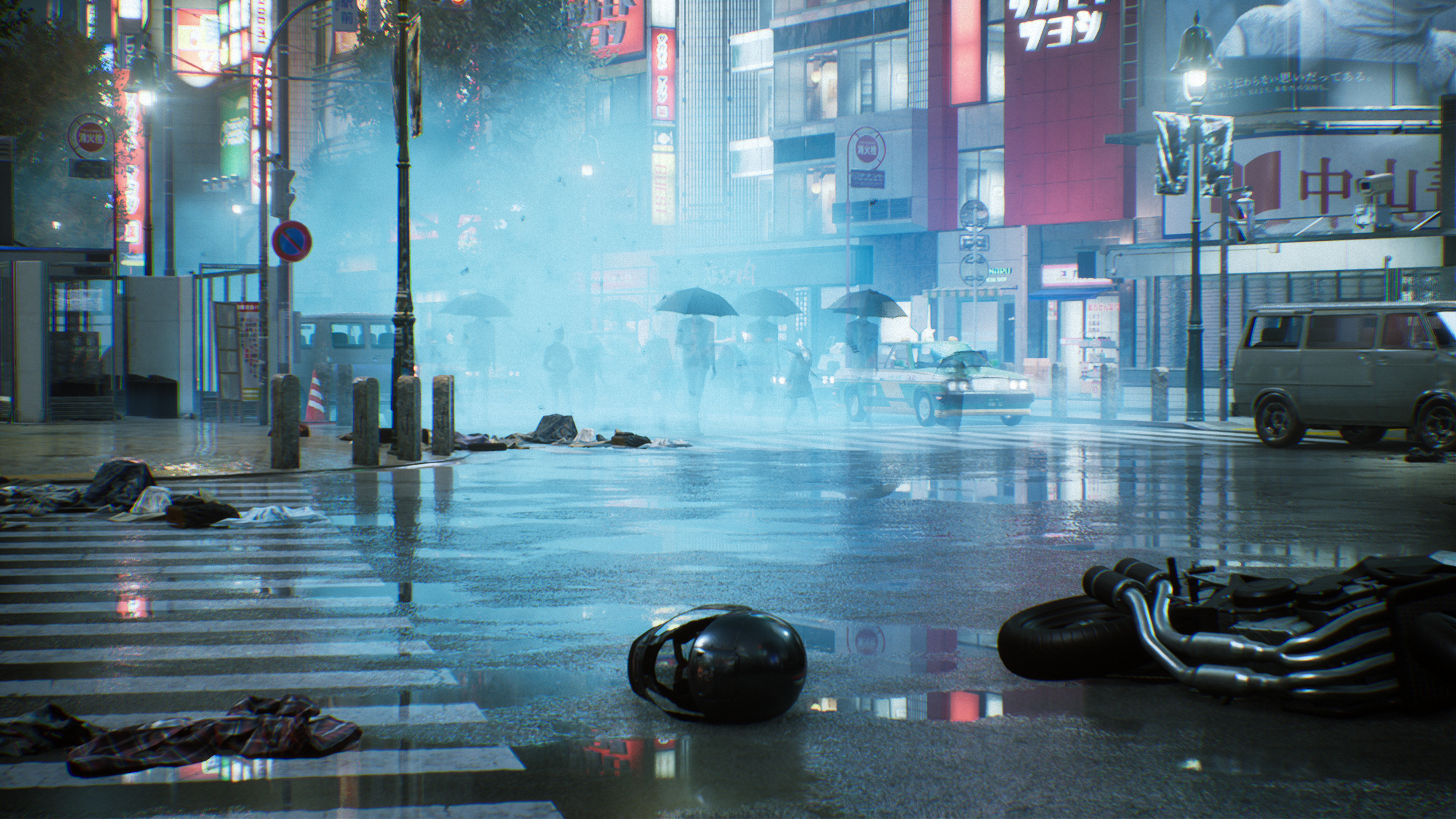 Ghostwire: Tokyo’s world design is exceptional but moving through is not. Akito is not the most mobile person but there’s a degree of stiffness to everything. Jumping, climbing, and just sprinting feels lifeless. Often Akito will get stuck when trying to move past construction paths and won’t climb certain structures. There are plenty of fast travel points in the way of the cleanse shrines and Nekomatas who provide optional searching missions the thrill of discovery starts to become stale when it’s just finding out you’re doing the same mission again but in a different area.

The developers did attempt to create dynamic events in the way of demon parades and spirit draining. The demon parades are visually appealing at first, if you get close you’re sucked into a horde fight. As for the spirit-draining events, you just have to kill Visitors in a timed objective.

As for purification, you’re going to perform the same patterns over and over again. Akito has to draw a pattern to cleanse spirits and specters but it becomes very annoying after the 20th time. You don’t have to wait for the pattern to draw entirely and can start immediately. Since you’ll be doing this for the entire game memorizing the patterns is easy and there’s only 1 unique star pattern for a special person.

The enemies you’ll face are wonderfully designed, all resembling slender men in some fashion, but well designed. Each type has distinct attacks but eventually, the game repeats the same enemies over and over again. Even adding what seemed to be a unique side mission boss fights into the common enemy pool.

The boss fights are refreshing affairs that offer some amazing cinematic conflicts. After facing the same Visitors these are wonderful breaks, having Akito and KK use everything they’ve learned. Sometimes Akito will lose access to KK and have to fight alone which offers an interesting dynamic change but is underutilized. 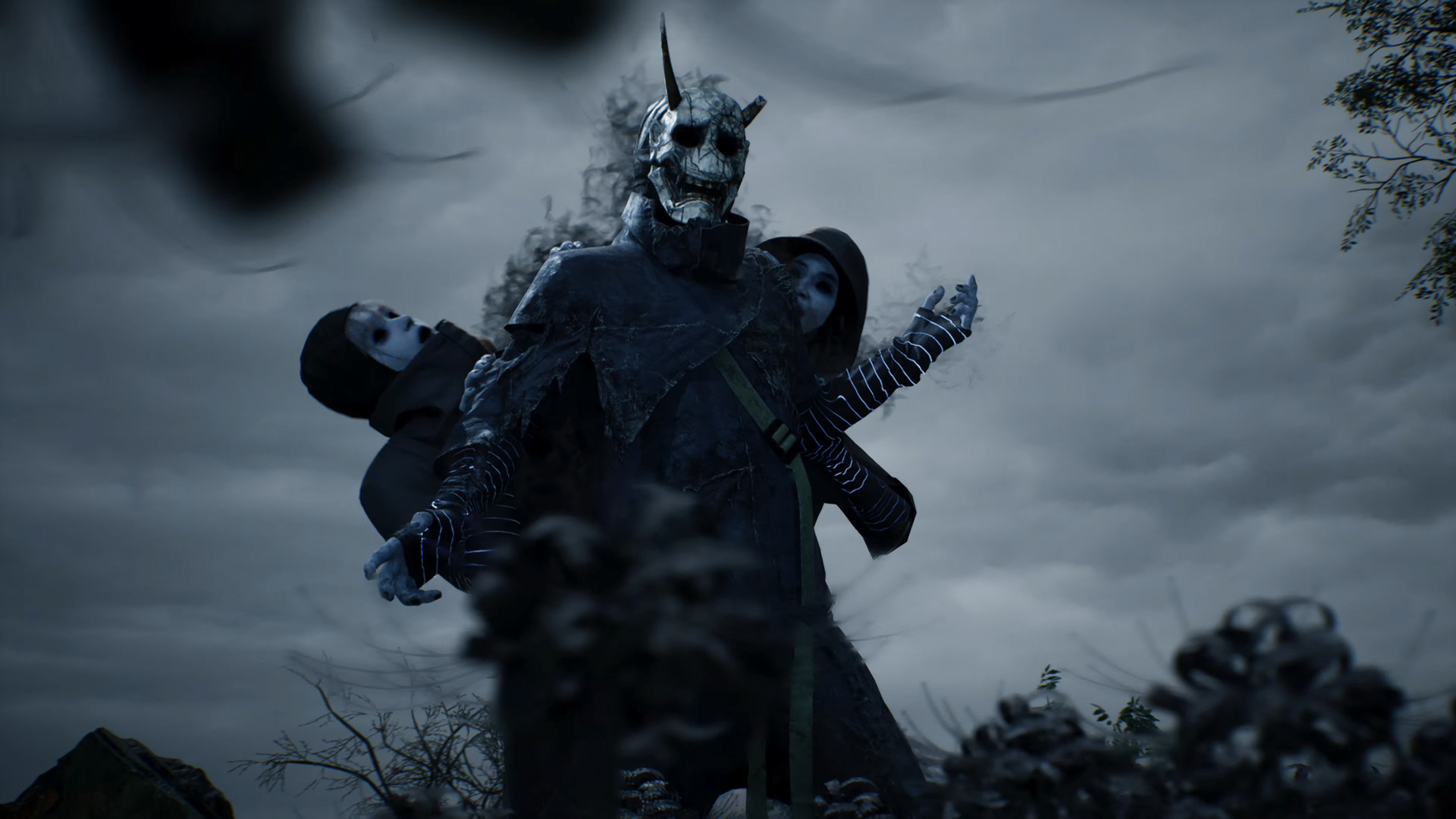 Like in the world design the cinematics for Ghostwire: Tokyo is exceptional. The cutscenes are pure eye candy in visual design and the character models are phenomenal. The voice actors did a great job and despite the main villain being one-note Akito and KK’s hardships are relatable. They’re just 2 people who didn’t make the best decisions but are trying to do what is right.

The supporting cast does an okay job of building up KK’s world and those responsible. Rinko, a co-worker of KK, plays a major role in the journey but often comes and goes. Considering everyone is joining there isn’t much in the way of others to interact with. Many of the spirits are hollow and don’t have much of a personality. 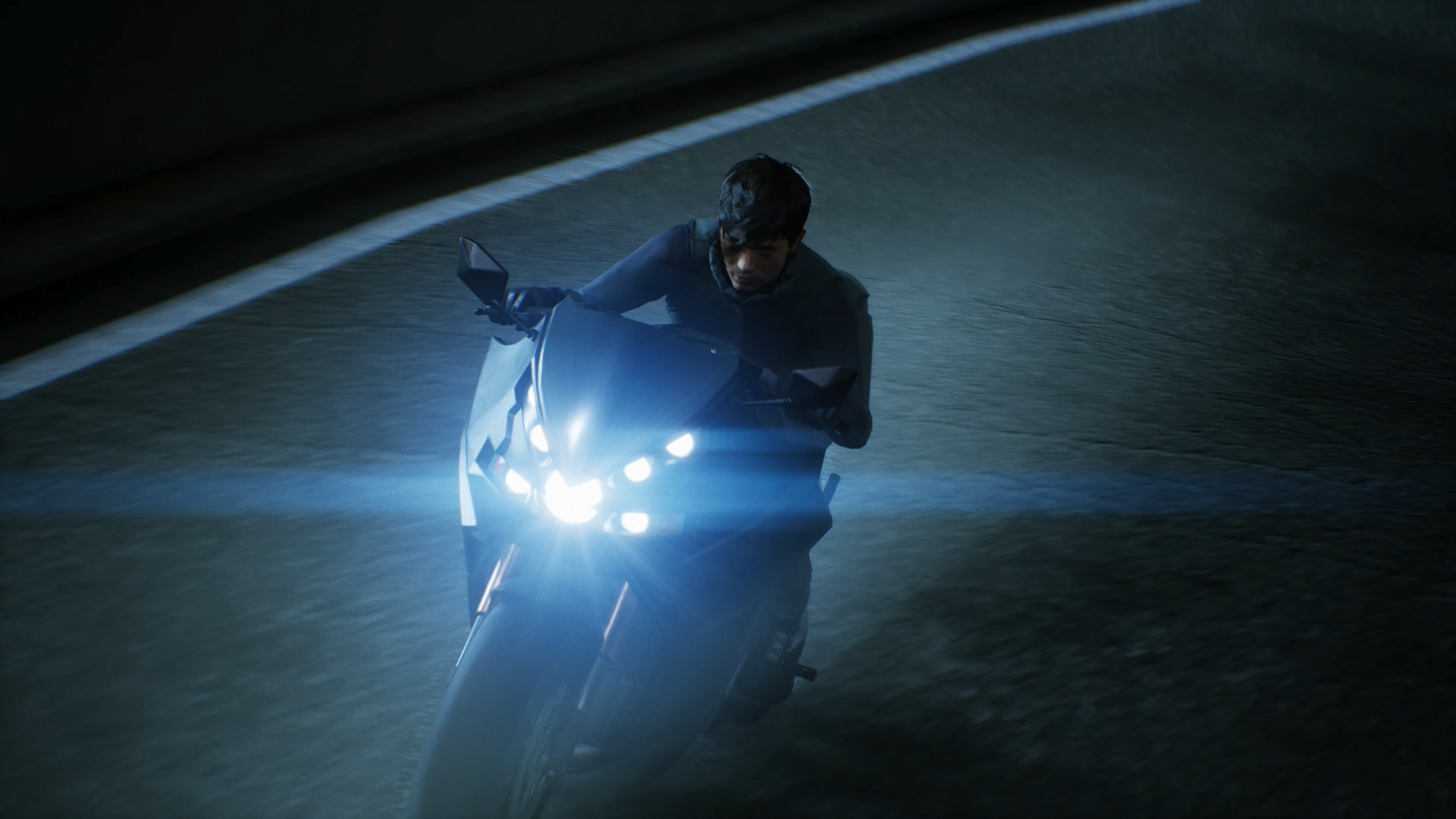 Ghostwire: Tokyo excels at its visual design and presentation. Navigating the streets of Tokyo and facing the Visitors is thrilling, for the first 2 hours of this 10-hour adventure. But that excitement slowly falls and plateaus as you perform the same tasks over and over again. Despite these heavy shortcomings Ghostwire: Tokyo is a beautiful experience that shouldn’t be missed out on.