Note: This review is based on the PlayStation 5 version of Horizon Forbidden West. With reports that the game was bricking some PS5s, I took care to end my sessions at a campfire and altogether quit the game since it seemed like most of the issues had stemmed from going into rest mode with the game still running in the background.

Has it been five years since we first met Aloy? It has indeed. As massive as it was, Zero Dawn was just the tip of the iceberg for Guerrilla Games, and Forbidden West improves on its predecessor in nearly every way.

*Spoilers for Horizon Zero Dawn and Forbidden West. (I tried to stay away from the biggest ones.)

It’s not exactly easy to jump into the game if you’re a newcomer, as the introduction video that plays at the beginning is just a swift and dirty retelling of the events in the first game. If you’re new to the Horizon world and haven’t played Zero Dawn, I’d suggest watching a playthrough on YouTube or reading through a plot summary online. The same goes for if you haven’t picked up the first since completing the main story or the Frozen Wilds expansion as well. (IGN has a great video primer as well.)

Forbidden West begins six months after the battle with HADES and the Eclipse. You find out that Aloy didn’t stay very long in Meridian for celebration, as a new problem quickly arose – a red blight ravaging the world and threatening to end all life. Aloy’s quest to save the world brings her looking for a backup of GAIA, a powerful artificial intelligence that oversaw Earth’s renewal after Ted Faro’s machines wiped everything out. (And it’s Earth’s best hope to be rid of the blight.)

As opposed to Aloy’s solitary journey in Zero Dawn, Guerrilla made use of companions for our red-haired hero this time around. Varl and Erend from Zero Dawn played significant parts in the journey West, and Zo, Alva, and Kotallo made welcome companions in the new environments.

Several others from the first game appear in the sequel, an excellent thread tying the two games together even with the brand-new locations.

Aloy starts Forbidden West the same way she ends Zero Dawn; she is still a very solitary person who refuses to get others involved because they may get hurt or killed. Her outcast status and being raised by Rost shaped that mentality; I’m actually very excited to stay that Rost gets mentioned more than once in Forbidden West. She comes to understand that having companions to help her isn’t a bad thing – with this bigger, badder enemy and high and higher stakes, it’s necessary. 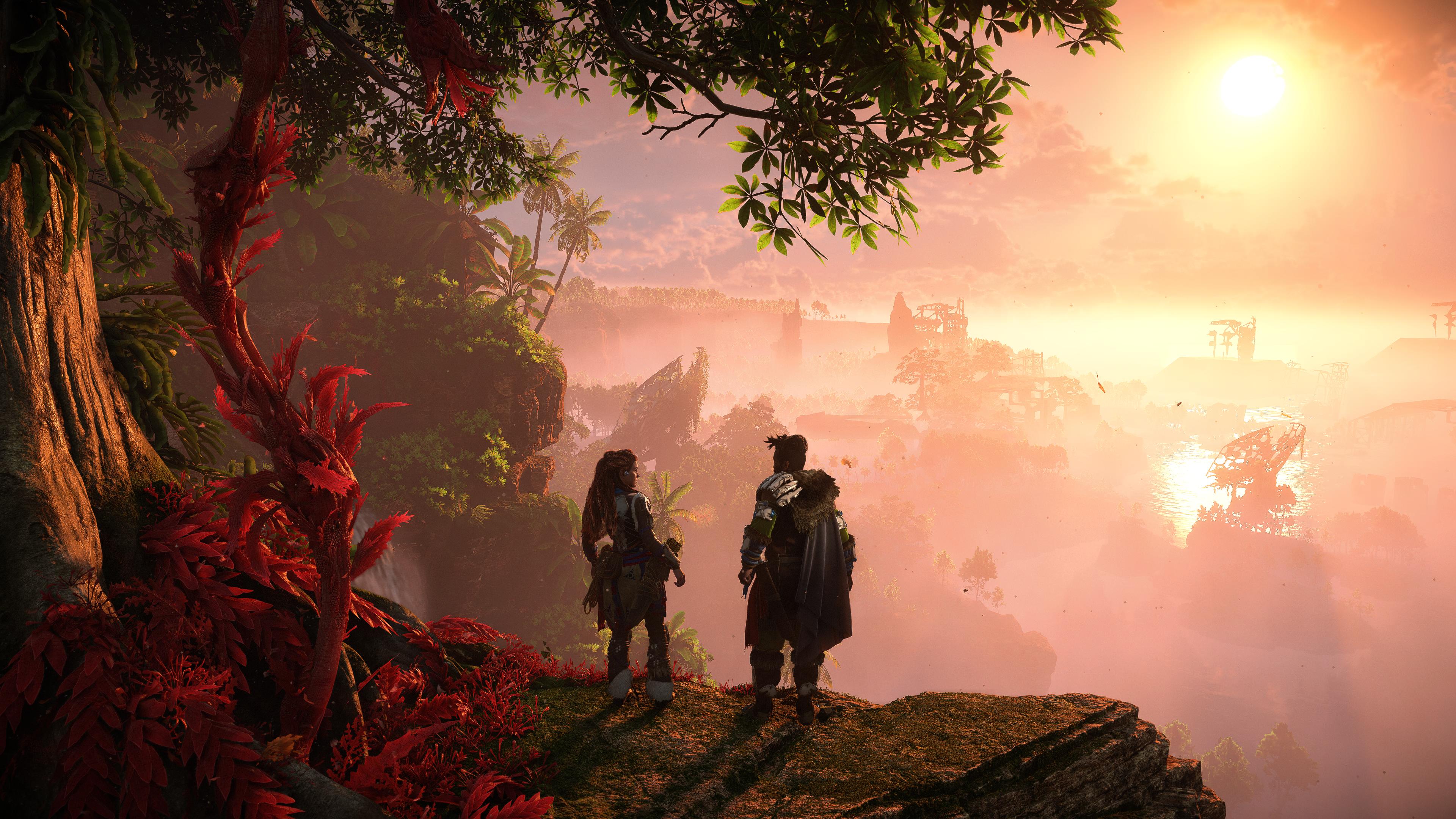 Varl is the first friend you meet up with in Horizon Forbidden West, but he’s not the last.

I couldn’t get enough of Horizon’s open world. I often get overwhelmed at just the thought of open-world games these days; going to school and being a parent of a toddler means that I have zero time to play games.

I give a lot of credit to Guerrilla for creating the main story that they did – there were plenty of twists and turns I didn’t see coming (including some batsh*t crazy moments), but the game thrives in the side quests of Forbidden West. The diversity and number of people and tribes you meet in these new areas is astonishing, and each of them felt like fully formed characters that I wished I could spend more time with.

If you’re reading this review and haven’t picked up the game yet – or if you’ve finished the main story and think you’re finished with the game itself, go to the settlements and do some side quests. You’ll get some good loot and resources, and you’ll have a good time.

Guerrilla also made a few welcome changes to some mechanics in the world. My favorites? Making fast traveling free between discovered campfires (Yay for not having to hoard fast travel packs) and giving Aloy a stash to put your bumper crop of berries and other resources in. Some of the mechanics from the first game also got a fresh coat of paint in the sequel; like overriding a Tallneck was about more than just finding the appropriate point to jump from – I had to learn how to override a specific machine to be able to do a couple of them.

Activities like Proving Grounds return, but, in a nod to Gwent from The Witcher and Orlog in Assassin’s Creed Valhalla, you can also play Machine Strike, a game created for the series, at settlements. It’s a fun game; easy to learn but hard to master, and I’m looking forward to seeing the eventual real-world version of it. 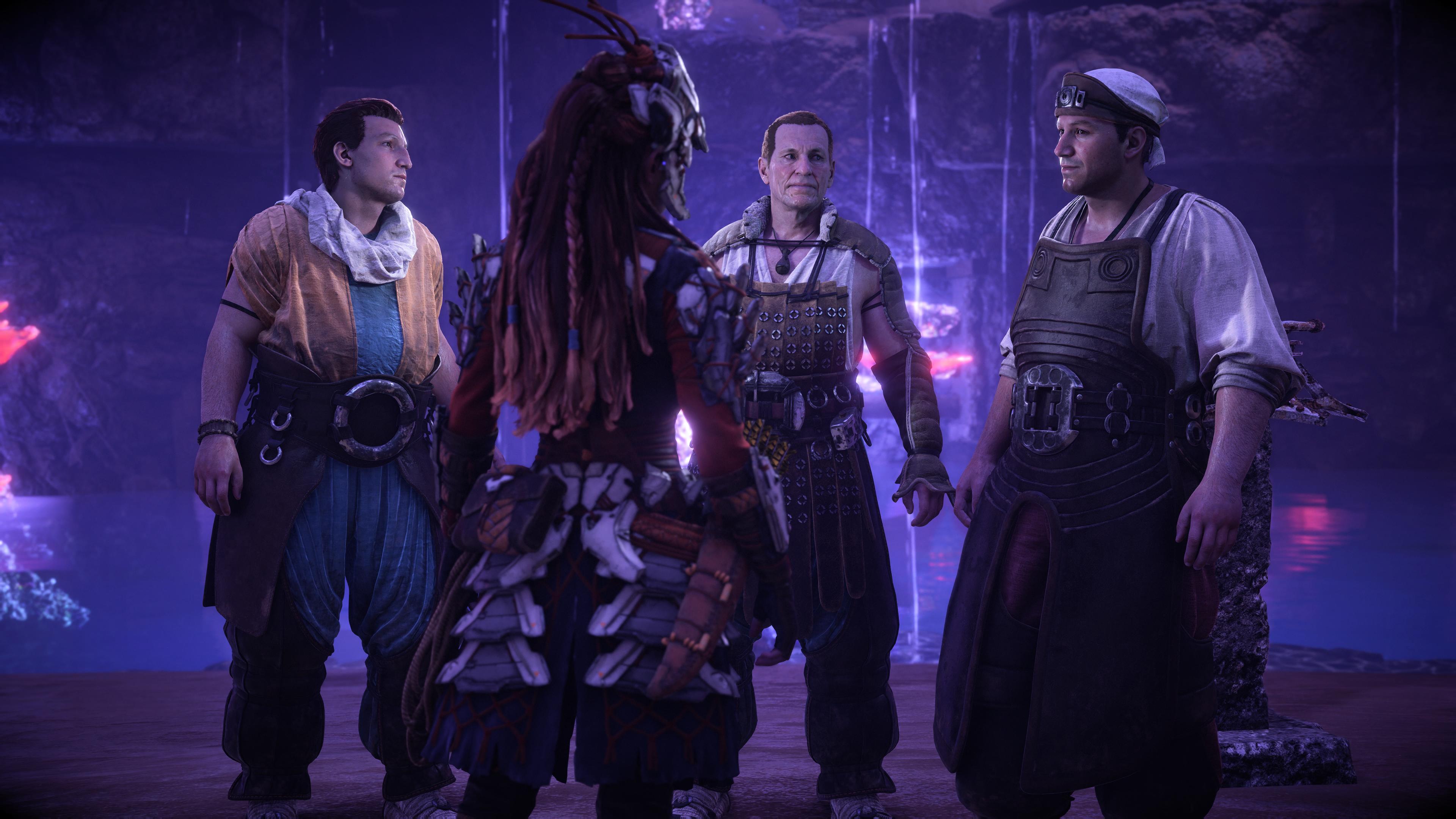 Can I get a game about these guys and their salvaging adventures?

With a heavy emphasis on how accessible games are in recent years, I wanted to dive into some of Guerrilla’s options for Forbidden West. Some were welcome additions, and some still need work. You now have the option for grabbable and climbable things to be highlighted, but if you were trying to see those highlights in the middle of the day when the sun was out and no clouds in the sky, I could hardly tell if they were there. (Climbing was better in Forbidden West, but it could still be maddingly frustrating at times, even with the help.)

There weren’t many options for subtitles other than size (the default being far too small), and the only option for a background was whether there was one or not. It would have been nice for an opportunity to have the speakers’ names colored or have an opacity slider for the background of the subtitles.

A friend of mine has Protanopia, where he has trouble telling between red-related colors. Given the prevalence of red shades and pinks in the Horizon games (think when Aloy is tracking something), I was hoping I’d be able to report that there would be colorblind options for him, and others like him

Many games have made great strides in accessibility, The Last of Us Part II and Guardians of the Galaxy among them, but the omissions in Forbidden West still prove there’s a long way to go.

Skills of a Savior

One of the most significant changes between Zero Dawn and Forbidden West was how Guerrilla integrated skill trees. Instead of three skill trees, there are six in the sequel, centered on what Aloy needs to survive the West. (Warrior, Trapper, Hunter, Survivor, Infiltrator, and Machine Hunter.) It’s an excellent way to reflect on how Aloy’s abilities have grown since Zero Dawn, which is immense. She’s well-known as the Savior of Meridian, her red hair and reputation proceeding her.

These trees are filled with active skills, passive boosts, different weapon techniques, and finally, Valor Surges. Think of a Valor Surge as an ‘ultimate.’

(Aloy builds up valor by doing things like taking out machines.) Each skill tree gives you access to two Valor Surges, though you can only have one equipped at a time. (I was a big fan of the Valor Surges on the Hunter Skill tree, Ranged Master, and Power Shots.)

If you take the time and do lots of side quests as you’re playing through the main story, you can get pretty darn close to netting several Valor Surges that you can choose from. 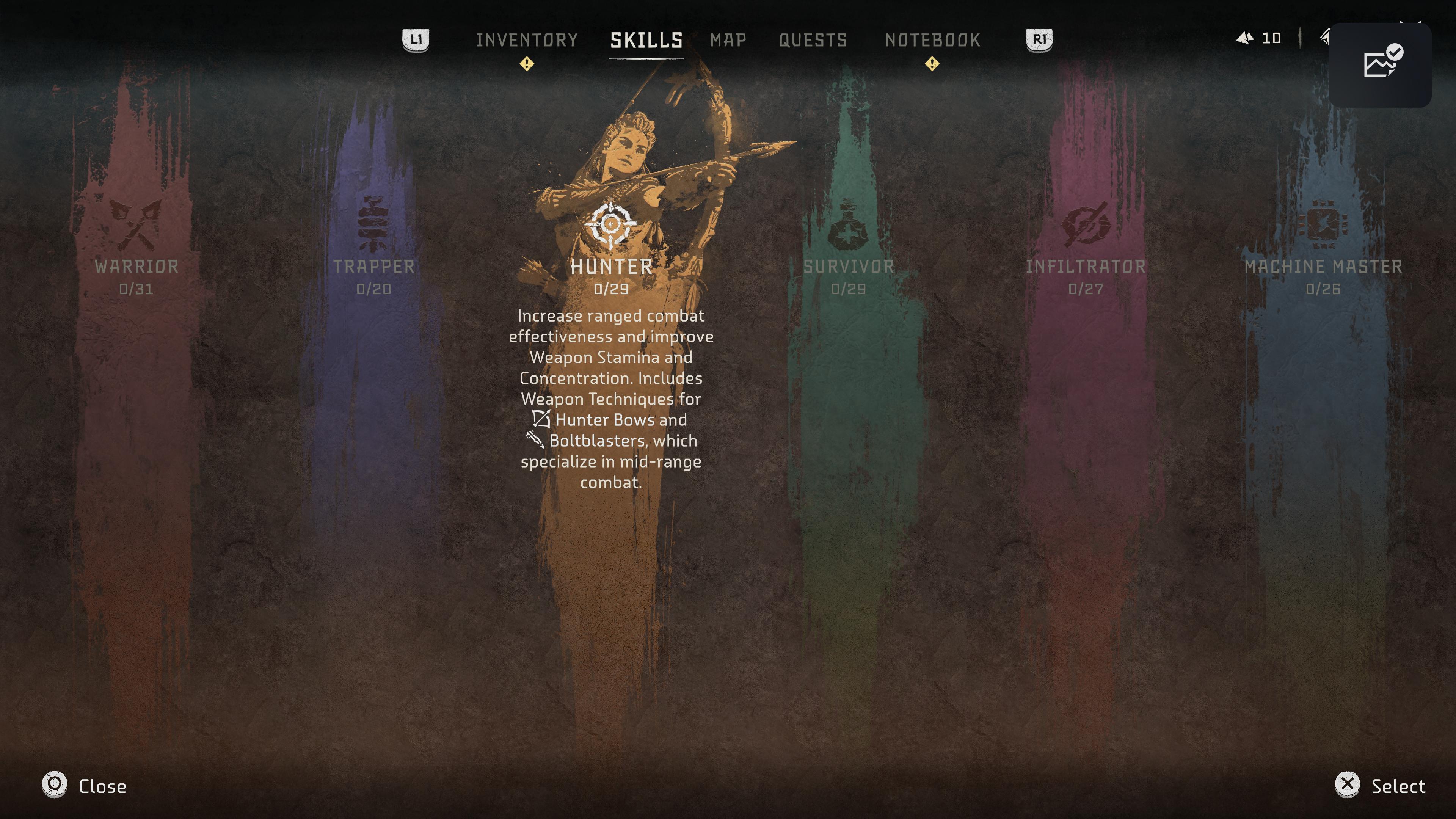 The Skill Trees are much more expansive in Aloy’s newest adventure. (Screenshot is from the beginning of Forbidden West.)

Ashly Burch, Lance Reddick, John MacMillan, and John Hopkins were among those who returned to Forbidden West as Aloy, Sylens, Varl, and Erend, respectively. They’re even more dialed-in to their characters this time around, and seeing and hearing them all again was like getting back together with old friends.

Guerrilla also got a couple of Hollywood A-listers on the cast roster this time around, Trinity herself, Carrie-Anne Moss, and Black Panther’s Queen Ramonda, Angela Bassett. Bassett’s character of Regalla was a compelling antagonist that didn’t have anywhere near enough screen time, while Moss’s Tilda was an interesting link to the past.

As for the musical score of the game, Joris de Man, Niels van der Leest, and The Flight returned from Zero Dawn, and for Forbidden West, they were joined by Oleksa Lozowchuk. The group did a great job of taking themes built up in Zero Dawn and giving them a new twist in Forbidden West, and giving the new tribes a musical identity all their own.

(You can listen to the music on your music streaming service of choice. It’s phenomenal.)

Horizon Forbidden West builds on the world Guerrilla created in Zero Dawn in every way, and with the events of the ending, I can’t wait to see what’s next for Aloy and company. Forbidden West is also the first game I’ve played on my PlayStation 5 that was built with the PlayStation 5 in mind, and, in my opinion, it’s the reason to get the console (if you can find one).

Animations are gorgeous, and all the characters in the game feel fresh and different, and they feel like real people. The NPC’s are a big reason to return to playing after you roll credits on the game’s main story.

Many machines from Zero Dawn return to rear their ugly heads in this game, but there are also many more to find and fight in the lands of the West. (45 hours into the game and one full playthrough of the main story, I still haven’t seen them all yet.)

The minor issues I had with Forbidden West don’t stop me from recommending it wholeheartedly. There’s still many, many hours of fun here, from meeting people, hunting machines, and becoming a photographer with Photo Mode. 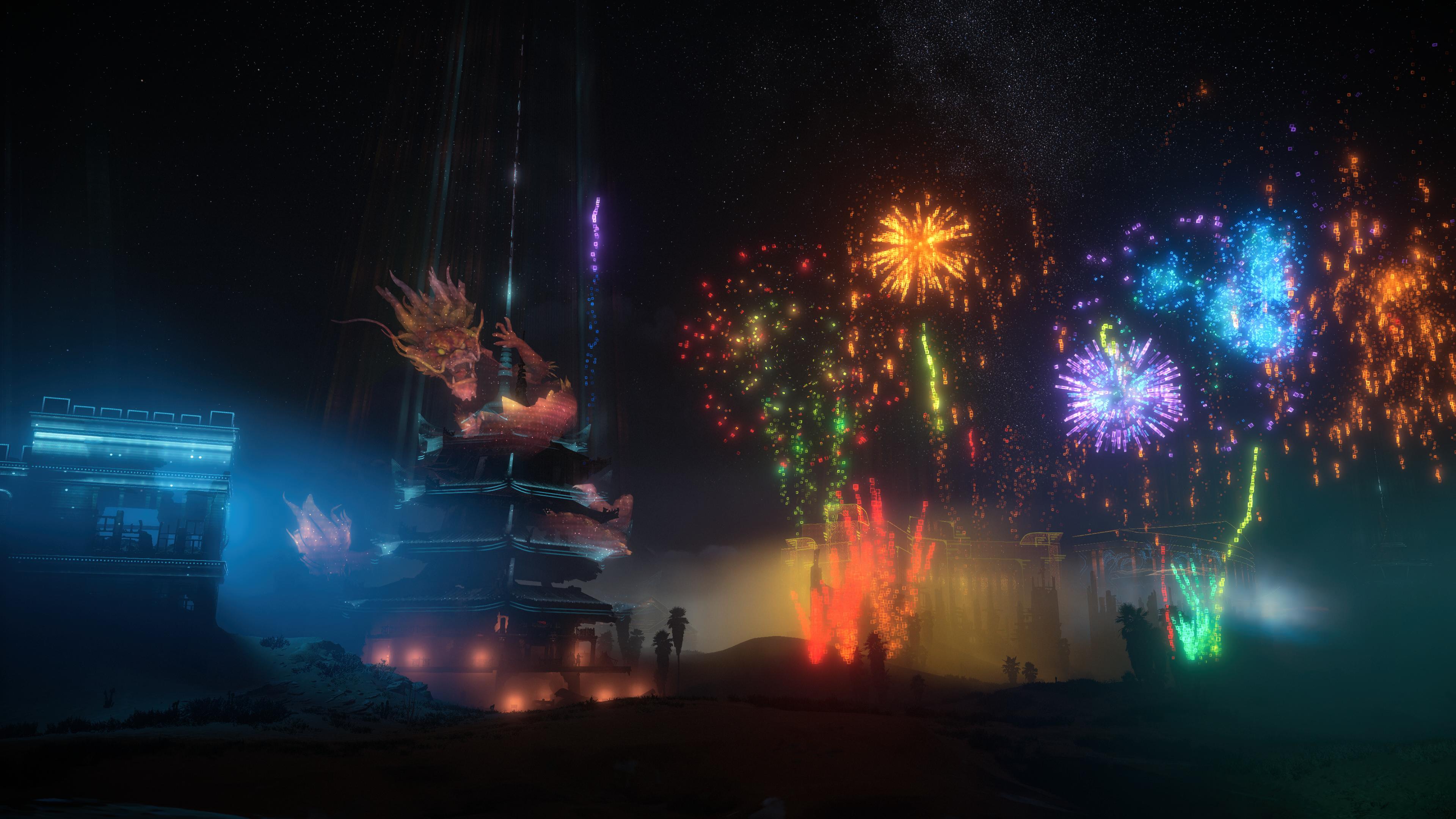 Horizon’s world is steadily evolving, and I can’t wait for more.