“The universe never tells us if we did right or wrong. It’s more important to try and help people than to know you did. More important that someone else’s life gets better than for you to feel good about yourself. You never know the effect you might have on someone, not really. Maybe one core thing you said haunts them forever. Maybe one moment of kindness gives them comfort or courage. Maybe you said the one thing they needed to hear. It doesn’t matter if you know. You just have to try.”

The Expanse ended its run on Amazon Prime recently, and while we may never see the events of the last three books of the series come to screen, the main saga of the Rocinante, her crew, and Marco Inaros came to a fitting end.

However, while we may not get what happens next, we’re getting a spin-off video game with arguably one of the most memorable characters on the show, Camina Drummer. And best of all, it’s coming from Telltale Games and Deck Nine.

Note: I haven’t read the books that make up The Expanse, so these words and opinions come from the show. Once I get a free minute in my life where I’m not reading the same two books repeatedly to my kid, that’s going to change.

I’ll say it right here. Deck Nine is the best choice out there for a meaningful game set in The Expanse universe.

So Far: Just a Tease

The trailer didn’t give away much, other than Cara Gee is reprising her role as Drummer. A short write-up in January’s Game Informer offered up that it’s going to be a prequel, set in the same universe as the show, and that Deck Nine (Life is Strange: Before the Storm and Life is Strange: True Colors) was doing the work using Telltale’s engine.

While Deck Nine hasn’t worked on a science fiction game, they’ve proven they know how to handle complex relationships and broad definitions of family. After its political themes, I’ve always considered family a powerful recurring theme throughout The Expanse. It’s prevalent almost everywhere; Holden, Naomi, Amos, Alex, and later Clarissa on the Roci, the Belters and their Factions (Drummer and her #PolyamBelterFam), Alex and Bobbi, Amos and Clarissa…familial ties, even without the blood bond, were numerous in this show.

To me and many others, science fiction stories exist to tell stories about what makes us human and what humans could be (whether good or bad). They’re my favorite tales; growing up with Star Trek and Star Wars led me to love Stargate, Battlestar Galactica, Fringe, and The Expanse. You may think that science fiction movies, shows, and books are just about aliens or epic space battles, but I challenge you to go beyond that. A common thread between these stories are familial bonds, memorable characters, and excellent writing, which are foils to the greater conflicts at hand.

And that’s why Deck Nine is the perfect choice for the first video game based on The Expanse.

*Spoilers for Life is Strange: Before the Storm and True Colors

Life is Strange: Before the Storm was not just about what happened to Chloe and meeting Rachel Amber in the events before the first Life is Strange, it was a tale of two families. One, Joyce and Chloe, still dealing with grief over William’s death and Joyce getting into her relationship with David. They weren’t doing great, and poor Joyce barely held things together. Second, we had the Amber family. Perfect on the outside with James being a District Attorney, but behind closed doors, they were dealing with skeletons in the closet of their own.

“Family isn’t always blood, it’s the people in your life who want you in theirs: the ones who accept you for who you are, the ones who would do anything to see you smile, and who love you no matter what.” –Maya Angelou

One of the significant themes of Life is Strange: True Colors was the concept of found family. Alex and Gabe lost their mom to illness, and their father left them to Child Protective Services. Gabe later got sent to juvie for stealing a car, separating the siblings. After being released, he tried to track down their father, bringing him to Haven Springs. Gabe found Alex and invited her to stay in the quaint Colorado town. His quest to find their father had hit a dead end, but Gabe found himself with a new life. He had a stable job, friends, a partner, and finally, his sister.

Alex’s life in foster care was rough, we learn through her writings and the items you find throughout the game, and the majority of Chapter 5 was based around her time before Haven Springs. Alex got her own found family through her time in Haven Springs, complete with friends, people who believed in her, and if you chose, a love interest.

It’s All About Characters

Before the Storm and True Colors did a great job creating original characters and bringing life to one we only knew through the lens of others. We’d only heard what other people thought of Rachel Amber through others in the first Life is Strange, and reactions ran the gamut. Chloe called her “my angel,” but others didn’t have such a rosy opinion, as evidenced by some graffiti you find and people you talk to. In Before the Storm, Deck Nine was tasked with fulfilling all our (players) expectations, and in my opinion, delivered.

They’ve also created original characters that have stuck with me (and others) through their two games. Steph Gingrich’s introduction in Before the Storm was a memorable one. Chloe was meeting up with her to get a movie, and by the end of it, you’re playing Dungeons & Dragons. Steph was not only an out and proud geek, but she was also an out and confident lesbian. Gingrich quickly became a fan-favorite character, even though her only power was being awesome. And a fierce friend. 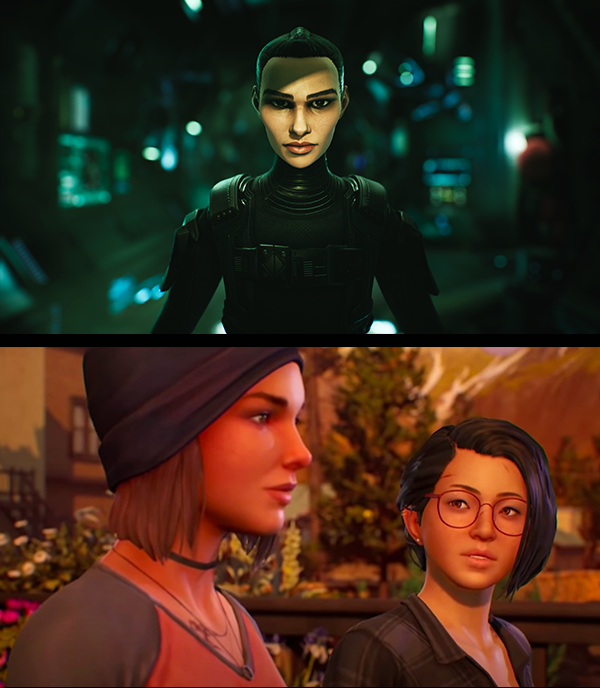 Steph even returned in True Colors, where she got her own exceptional DLC. Wavelengths helped shed a little light on the storm’s aftermath at the end of the first Life is Strange. (And took your Bay over Bae choice into account.) However, as much as I loved her return, Alex Chen was the real star in True Colors.

Alex wasn’t nine feet tall, or a soldier, or have the ability to fly; she was just a girl with a lifetime of trauma behind her and a power she didn’t want. The evolution of her character through True Colors was nothing short of exemplary. Video games don’t always have to be about people with super-human abilities. Neither do science-fiction (or fantasy) books, games, television shows, or movies.

But What About Laconia? And Space Battles?

I don’t know much about the Laconia war that’s teased in the television show; it’s set something like a decade or two after the conflict with the Free Navy. I don’t think that would have been the right way to go with a story based on Camina Drummer and the Belters, though; maybe if Deck Nine and Telltale make a home run with this, we’ll see that area of the books come alive in a video game.

But for now, with this game, Telltale made an excellent choice to give the reins to Deck Nine. With their expertise in handling complex characters and relationships and attention to detail, they’re the perfect studio to take on a fiercely loved character like Camina Drummer and a complicated group like the Belters.

(P.S: If anyone from Deck Nine stumbles upon this, hello! Also, you’ll make this Screaming Firehawk happy if David Strathairn were to make an appearance voicing Klaes Ashford. He and Drummer did work the docks at Ceres back in the day!)