(Author’s Note: This review was written in August, for the Xbox/PC release of Twelve Minutes.)

Being in development since before 2015, Twelve Minutes has been a long time in the making. (Let’s just say I was very excited when the game was finally released for PC and Xbox consoles in August.) You can tell where developer Luis Antonio got his inspirations from – Twelve Minutes is part Groundhog Day, part Hitchcock thriller, with you at the helm channeling your best Sherlock Holmes/Beniot Blanc.

Do You Ever Really Know Someone?

You’re set to have a nice night with your wife when you realize you don’t have your keys. Thankfully, your dear wife has hidden them in a fake plant outside your door. You go in, and she greets you with the promise of your favorite dessert and some exciting news.

Except, it all goes to Hell. There’s a fateful knock on your door; a cop enters and accuses your wife of murdering her father eight years before. He’s demanding to know where a watch of his is, and she’s about to admit it – Except you’re dead.

But you’re not. You’re by the door again in the dim apartment, alternating between thinking you’re insane and wondering if the love of your life could be a murderer. 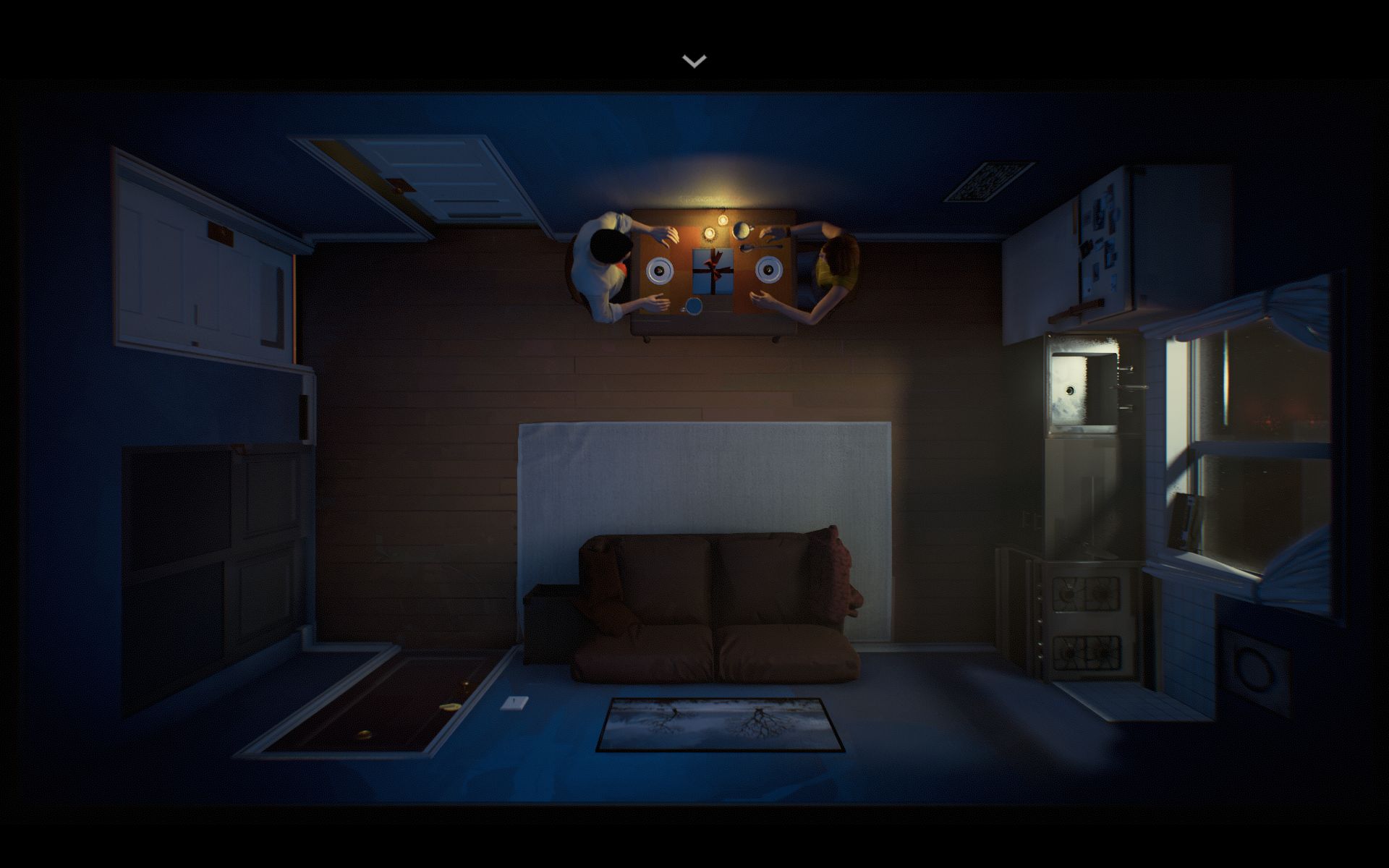 I will say: Make sure to actually have dessert with your wife once.

Over and Over Again

You quickly realize you only have just over ten minutes before the cop shows up again. Twelve Minutes is a puzzle game set to a ticking clock; you spend the loops talking to your wife, investigating rooms, and working out different options for dealing with the cop.

After a set of loops, I realized that doing nothing was a valid option. That stepping into the closet and hiding was an option that gave you access to the information you needed that you weren’t going to get any other way.

In so many games, you must scrounge around a large map to find a needle in a haystack to advance an objective. Could I find something vital to the story by just waiting in a closet? It turns out, yes.

It may sound strange, but when I finally started piecing things together and found myself in the end game, it was the most satisfying feeling. Again, a reminder. You don’t have to do anything. Experiment; don’t be afraid of getting launched into another loop. Yes, it can be maddening, but in one of the best ways, in my opinion.

I did not see the twist coming. If you’re reading this and you did, awesome. I’m still trying to wrap my head around it, to be honest. I haven’t been able to go back and get any other endings yet, but perhaps seeing more of the ends will make this clearer.

McAvoy, Ridley, and Dafoe all deliver in terms of performances in the game, and you almost can’t believe they didn’t record lines at the same studio together. I could hardly tell ‘Husband’ was James McAvoy, but that’s because I hear Charles Xavier in my head when I see his face now.

COVID-19 made doing voice-over for the game challenging, as Willem Dafoe was hunkering down in Rome, and Ridley and McAvoy were both sequestered in England. Would their performances have been even better if they could have recorded in the same room? Probably. We’ll never know, but they were still great.

(The TL;DR of the above paragraphs – they did the best they could with a not-great situation.)

Side note: With actors of their caliber, why wouldn’t they be awesome?

I have no complaints about how the game ran on my computer, either. Instead of a mouse and keyboard, I played the game with a controller, so I can’t speak to how that felt.  (Honestly, most times I just prefer a controller.)

Twelve Minutes Review: Windows of Opportunity
There's always a chance that when you're waiting multiple years for something that you're excited for that it's going to be a disappointing mess. Thankfully, that wasn't the case with Twelve Minutes. Some parts are maddening, but it's in those parts where the true story is born. If you're looking for instant gratification in a game this isn't the one for you, but if you're a fan of a slow-burn mystery with some puzzle aspects thrown in, Twelve Minutes is the way to go.
Graphics8
Sound9
Replay Value9
Playability8
Good
The Bad
8.5Overall Score
Reader Rating: (0 Votes)
0.0