Happy Halloween Everyone! Spooky season is well on its way and many of us have been watching horror movies and playing scary games for a while now, but with that, we got to talking. See we love all aspects of the horror genre and one always comes up. Zombies. We asked the staff here at Gaming Access Weekly to find out, “If you could pick three video game characters to be on your Zombie Survival Squad, who would they be and why?” These were their answers.

As someone who spent way too much time thinking about how to survive a zombie outbreak in high school, it kind of surprises me that I never thought about what video game characters I would bring with me as a squad in said zombie-filled world. There are so many things that go into surviving the zombie nightmare. Speed, strength, smarts, even sarcasm all have their place in the world.

If I had to start with someone it may as well be Kait from Gears of War 4 and Gears 5. She’s smart, strong, she has a mind link to a seemingly infinite army of reptilian nightmares. She would be a pillar of level-headed leadership and kindness, which is something needed in a bleak situation like an apocalypse.

My next squad member would have to be Bloodhound from Apex Legends. Their abilities to track and keep tabs on nearby enemies would be irreplaceable in a situation like this. Imagine having to loot a multifloored building and instead of just wondering and hoping it was safe Bloodhound could configure their scans to pick up on nearby zombies. Arguably the zombies don’t produce body heat but Bloodhound can scan robots so I don’t think configuring the scan to pick up the undead would be too difficult.

My final member would have to be Ellie from the Last of Us franchise. Ellie has been through absolute hell over the two games and DLC that has been her virtual life. She brings experience and knowledge that will keep the group alive and safe for years to come. Plus I just can’t pass up the opportunity to help her find Dina. I JUST WANT THEM TO BE HAPPY! Naughty Dog please they deserve it! 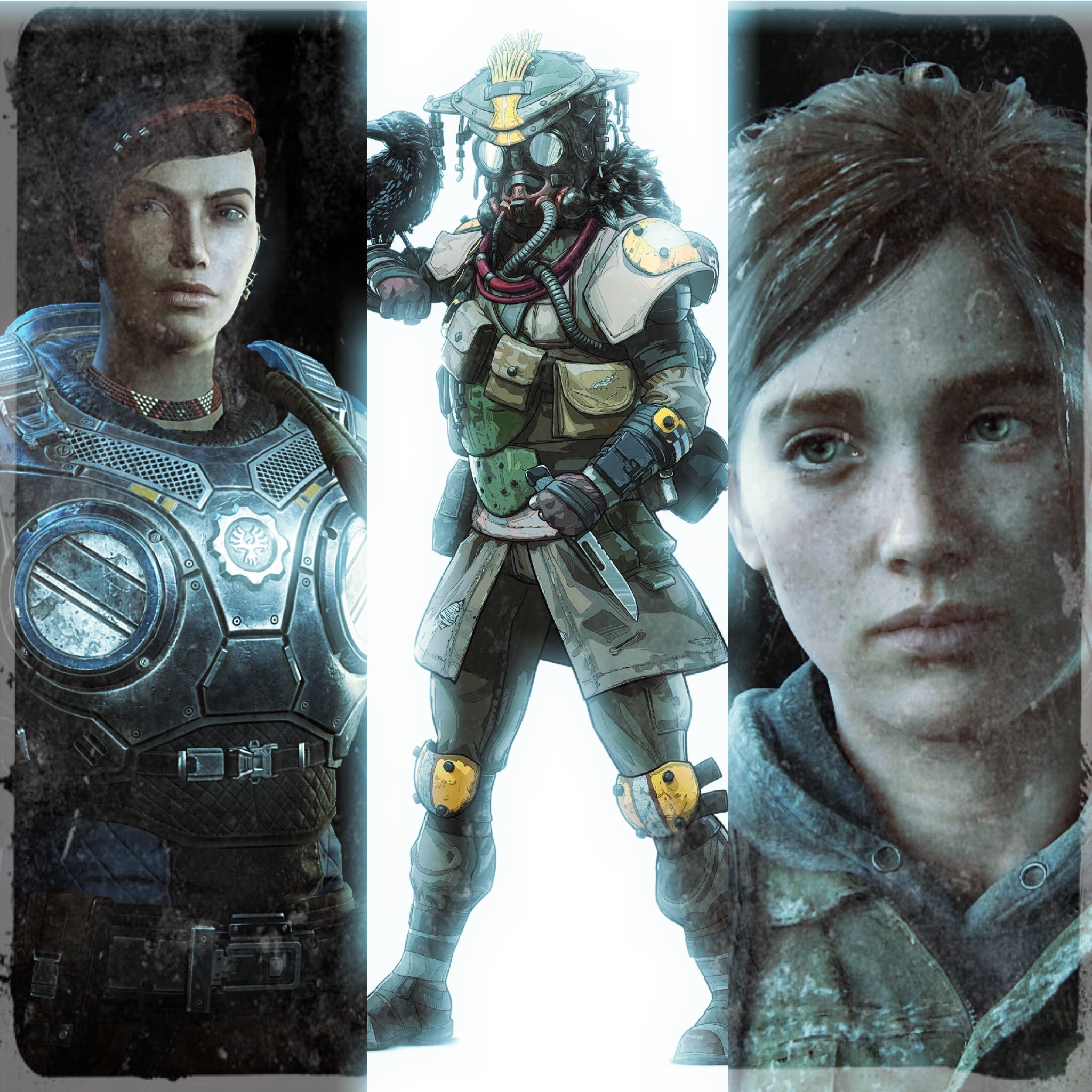 Nic S.
Senior Staff Writer/Tell Me What You Think About Candy Corn

This has always been a toughy of a question. Do I go with Brains (technically I guess it’d be braaaaaaaaaaaaaaainss) or brawn? I guess maybe a good mix of both? Do I go OP or a little more down-to-earth? Do I choose characters from established Zombo Bombo Gambos or go the complete opposite route? So many questions. Anyway, I ate half a pizza earlier let’s do this.

First pick is the Master Chief, John 117 from HALO. Because he’s Master Chief. He once gave the Covenant back their bomb. But also, he’s 7’2″ and weighs a ton in his armor. The dude is a walking tank, can use pretty much any weapon he gets his hands on, is entirely self-sufficient, and if all else fails, he can punch his way out. Bonus: he’s got experience dealing with hyper-aggro parasitic mutated infected freakazoids and if there’s anything my gambling habits have taught me is you never bet against experience. Let John lead the charge, guaranteed when he’s drawing all the attention of the horde, the rest of the team can scavenge in peace, at least until he’s done turning the horde into a slimy paste.

Second pick would have to be Isaac Clarke, from Dead Space. Wrong place, wrong time doesn’t begin to explain this poor engineer’s luck, but his ingenuity in repurposing tech to slice and dice his way through a literal moon at one point makes him a no-brainer for me (haha get it, another brains pun…zombies). He too has tech that’s super-advanced, like the ability to freeze things in stasis for a short period, and a telekinetic tool letting him grab things too hard to get to manually. All those space engineering smarts will come in handy too; you always need at least one person who knows how to jump-start a generator or hot-wire a planet cracker class spaceship. Isaac is the guy you can count on to get things up and running again once you’ve established camp/need to get to where you’re going.

Rounding out the team is Wattson from Apex Legends. Need to quarantine an area? She’s got the tech for that. Find a door where too much noise is coming from? Just have her set down a fence and that’s that. No need to worry. Or pair her up with Master Chief and let him lead the horde down through a fence for some easy building clearing. I’m sure she and Isaac would work well together too, and figure out a way for her transformer to supercharge Chief. Plus, I mean, Wattson also has the smarts enough to create a giant force field that burns everything it touches so you know, maybe she can figure out how to use that somewhere along the way.

You know…having two smarts and a walking war crime make up my team might be an indicator I would not be a part of any team in a zombie apocalypse. Whatever, I’d just throw candy corn at them like birds and see which ones went for it and which ones avoid it as my fun. Hell, I think I’d do that today and maybe I just figured out my weekend plans. Happy Halloween y’all! 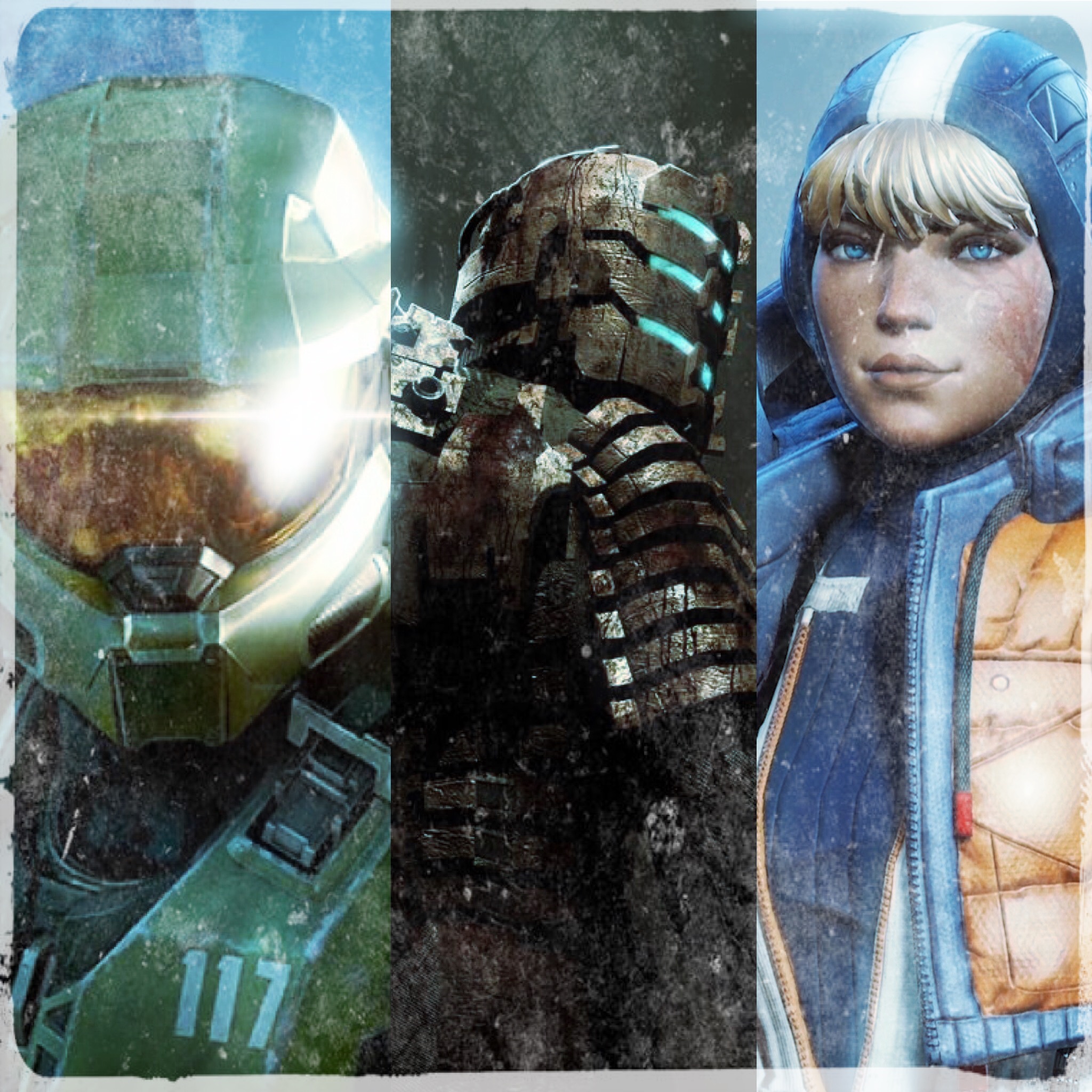 First on the team would be Tomb Raider’s Lara Croft (from the reboot series). After braving the lost island of Yamatai in the Dragon’s Triangle, the frozen, lost city of Kitezh and thwarting a world-ending apocalypse, zombies would just be another day at the office. Plus, Jonah would have to come with her, right? (RIGHT?)

Next, I’d have to say Rubi Malone from WET. She is a more than capable fighter and doesn’t care if she’s using a shotgun, a sword, SMG’s, or a revolver; she’ll take out her enemies. She’s super agile and goes absolutely berzerk when covered in blood. She could probably take out a zombie horde on her own. Not to mention, during the downtime from zombie killing, she could entertain us with the harmonica.

I’m going to get outside the box with my third pick – Faith Connors from Mirror’s Edge Catalyst. Faith is smart, fast, and can parkour like it’s nobody’s business. She can even evade bullets when she’s in Focus Mode, so zombies shouldn’t be a problem. Her quickness and ability to parkour would especially come in handy on supply runs. 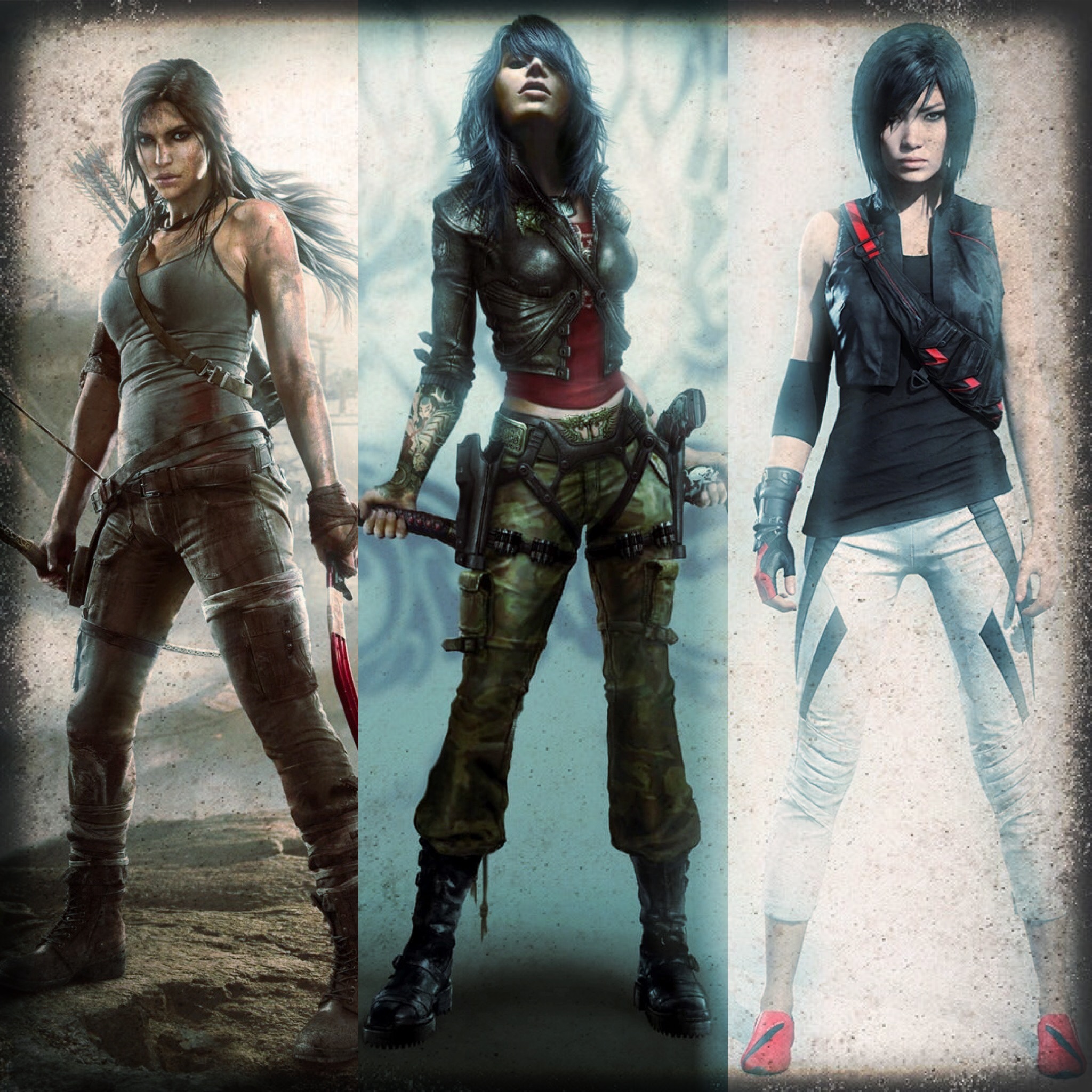 So, the zombie apocalypse is finally upon us, who do I feel will best suit my fighting style in this new era of survival horror. There are a variety of characters out there that would be highly beneficial for survival, though only a handful have the charisma and audacity to see things through the end.

First off, I would pick the greatest companion in the history of video games, Garrus Vakarian. Garrus is a renowned sniper and my right-hand man in every mass effect playthrough. I always steer Garrus down the path of ruthlessly efficient brutality, which I think would be a great aspect during a zombie apocalypse. Garrus can pick off the undead from afar as the rest of my companions and I go in for the close quarters finish.

Next in line for my ultimate survival team would be none other than the Doom Slayer aka DOOM Guy. Slaying an almost never-ending onslaught of demons seems pretty similar to a zombie apocalypse, at least in my mind. With Doom Guy’s arsenal, I could take large stretches of the end times to sit back, relax and enjoy the pure awesomeness of DOOM Guy in action. Something tells me watching DOOM Guy can be just as fun as playing DOOM Guy.

Finally, I would pick Handsome Jack from the Borderlands series. Not only is Jack the manically homicidal CEO of Hyperion, but he also takes great pride and revels in his enemy’s most gruesome demise. I figured his penchant for violence would make a great zombie survival buddy, however, Handsome Jack’s personality is at the forefront of why I picked him, if the world is ending, I might as well die laughing. 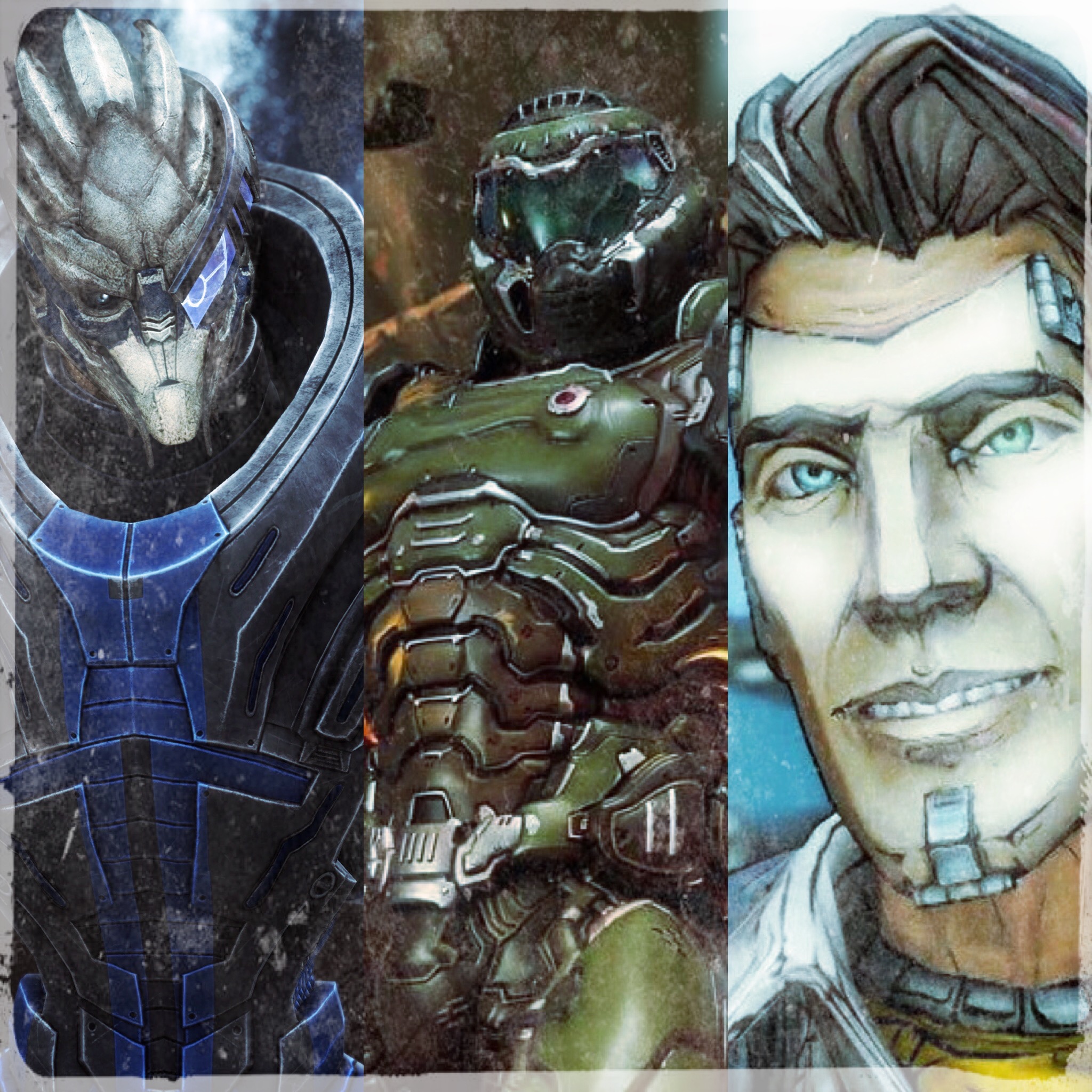 A Zombie team, in my opinion, needs to be swift, stealthy, strong, mentally stable. Unfortunately, that makes for a boring team, and kind of like what the rest of the team said.  So, I decided to go with a few odd characters that together we may make it…for a few days. You know, just to shake things up a bit.

First up in my team would be the one character that didn’t make it into Super Smash Bros. Ultimate. The purple fiend, Waluigi! While many feel his “Wah!” is insufferable, I’m happy to have him on my team. Sure he may betray us at some point for his own benefit, but you know, I would be insulted if he didn’t at least try. Waluigi has a ton of skills, (even if Smash Bros. failed to recognize that!) and his time in crime could help us survive at least the long haul zombie survival when little societies start to form. Oh God, Now I’m just picturing Waluigi x Neagan crossover character… My god … what have I done!

Next up, I would need someone who can take a hit and whip out damage, and I can’t think of anyone better than Simon Belmont from the Castlevania series. We are facing zombies? I mean undead is this guy’s specialty. However, he doesn’t exactly have a winning personality. None of his relatives did. Despite his dashing looks and barbarian build, I feel like facing a zombie wouldn’t be as insufferable as the cleric-emo garbage spewing from Belmont’s mouth half the time. His holy weapons and armor will come in handy though, especially during the initial outbreak. Simon is a rather brave guy also in case any of us need to cower. So take the good with the bad.

Since Waluigi would technically be our rouge team member, and Belmont would be our tank/cleric, then I suppose next would be tech or magic-user. Based on real-world factors, I suppose it would have to be tech. I feel there is no better tech-wizard to bring on board than Lucca from Chrono Trigger. She is a super-genius who fears very little. she can build weapons, repair robots, and most importantly, she can build multiverse teleport travel devices. I mean…We can wait it out somewhere else…or lure all the zombies into someone else’s universe. Let them deal with it.

Ok…I realize now that in setting out to pick random gaming characters, I made a pretty solid team. Perhaps we can make it more days. I would like to ask permission to add one more just for the sheer delight to have on my team and that’s Isabelle from Animal Crossing. It’s nice to take in the slow moments of survival and go fishing, and catching bugs with someone. But I would say her training with Doom Guy makes her handy in a fight. You should see what Isabelle can do with a shotgun! 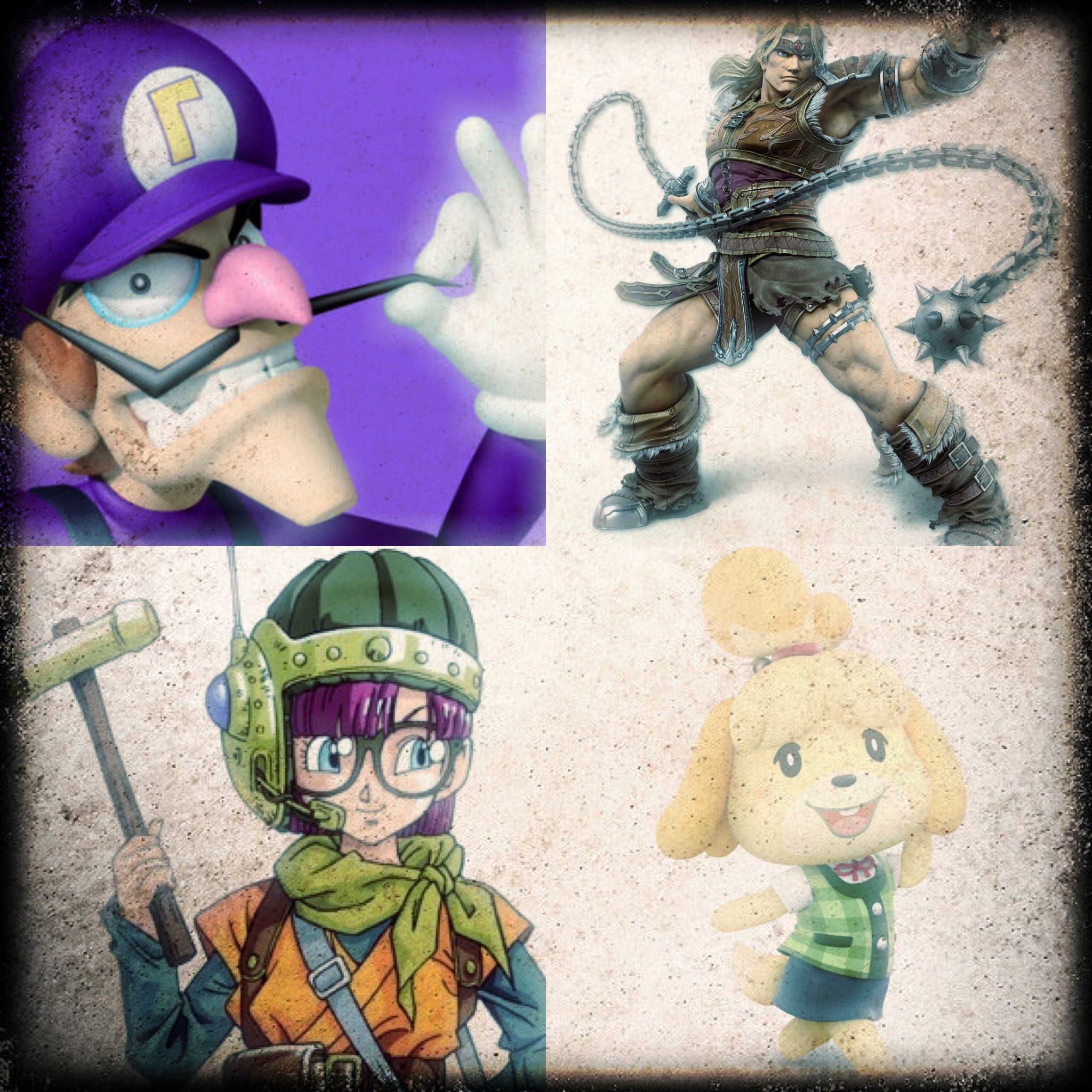 Well, that’s it for another GAW Picks. Who would you have on YOUR zombie survival team? What did you think of our picks? Tell us in the comment section below!

We want to wish all our readers a fun and safe Halloween!