NieR Replicant ver.1.22474487139… releases in mere hours and the heads of the game’s development, Yoko Taro and Yosuke Saito, provided a special message to fans. 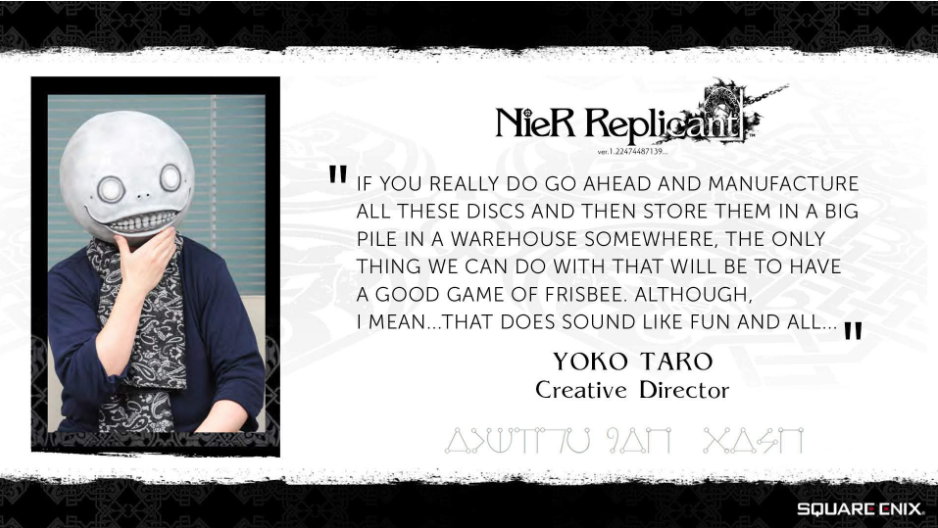 The message explains how this version of Nier Replicate isn’t a remake, it’s an upgraded version. The entirety of the game’s core message and features are simply to enhance the experience and not redo the game.

The message also reveals some key things about the game. Including how the name is just random numbers and how Taro is surprised that Nier Automata sold so well. As his previous games never did so well.

And another thing. In recent years, when I have been around Square Enix, they always give off this palpable aura of enthusiasm as if to say “Look! NieR:Automata (the previous thing I made) did well, so NieR Replicant will also sell now”. I would like to take this opportunity to tell Square Enix to take a good hard look at reality. Only the names are similar and the content of the two games is completely different, so it’s not really going to sell all that well now, is it lads?

I mean, come on, I made it! Automata selling was a fluke, and all my other stuff has hardly sold anything worthy of note. If you really do go ahead and manufacture all these discs and then store them in a big pile in a warehouse somewhere, the only thing we can do with that will be to have a good game of frisbee. Although, I mean… that does sound like fun and all…