Back from the bowels of 2005, Stubbs the Zombie in Rebel Without a Pulse is undead again. It is hard to say exactly if Stubbs the Zombie is worth revisiting in 2021 for its’ rerelease. The game overall is great for killing time, but it feels like a game that has no real substance. That’s not meant in a completely bad way.

The game is funny at times and has some decent bits in it, but I never felt compelled to even finish it. Let’s take a more in-depth look at Stubbs the Zombie Rebel Without a Pulse, and see if it was better-left shambling into the abyss. 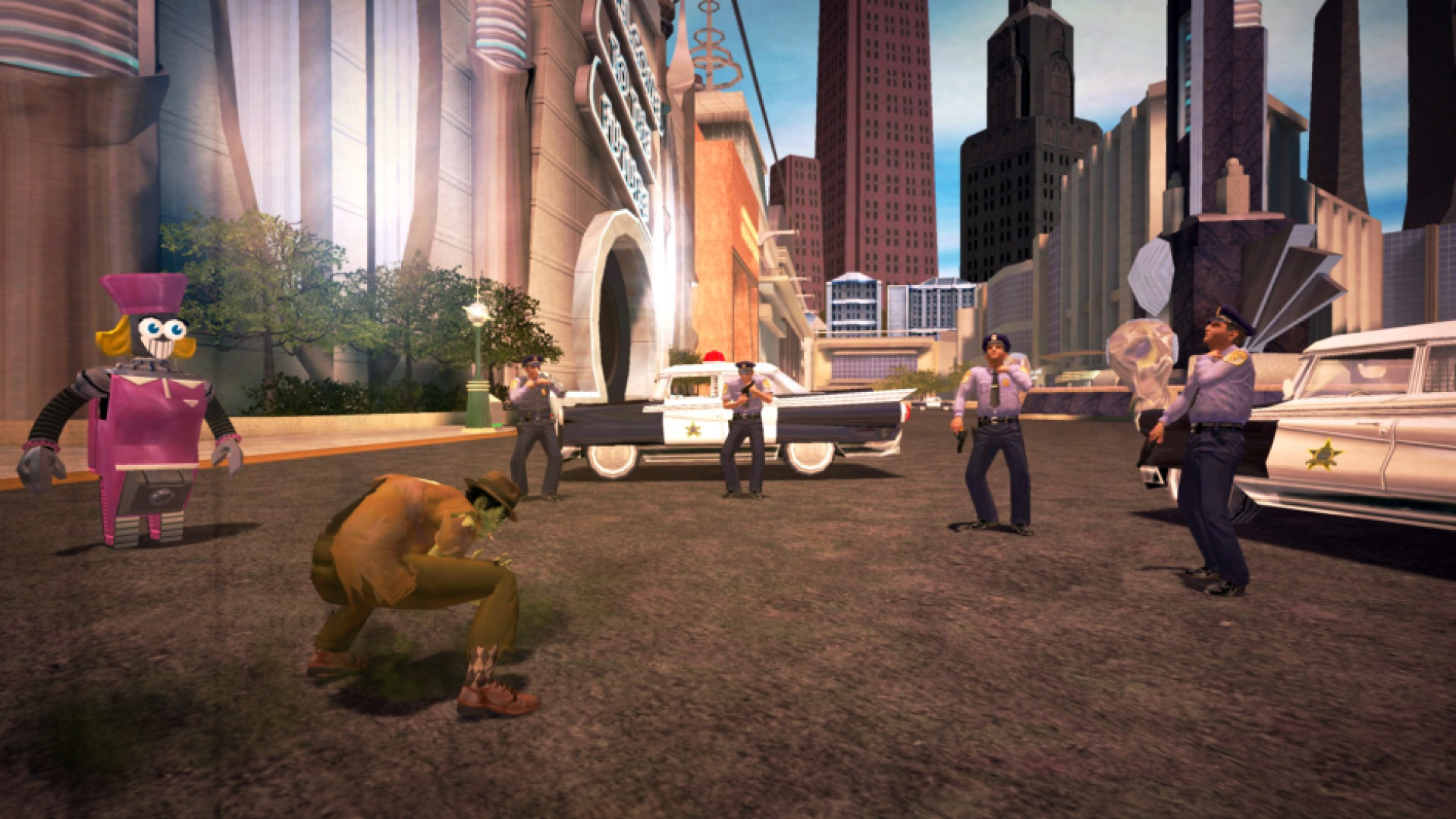 Where did you learn that?

The powers that Stubbs has aren’t what you would expect from the terrifying cadavers we know in our more modern zombie media. The player gains access to a number of powers as Stubbs. There’s one where Stubbs releases toxic gas from his lower intestines, farts, and it stuns the enemies nearby. It’s pretty useful for crowd control when dealing with enemies that have firearms.

One of the next abilities sees Stubbs rip off his hand and it becomes sentient. The player can use it to solve some quick puzzles, or even use it to temporarily possess a human. It’s one of my favorite abilities in the game as it allows Stubbs to be able to shoot back at attackers. Simply scurry the hand over to a nearby terminal and latch on to a lone officer’s head and start firing back. Definitely turns the fight in some of the levels.

My other favorite ability is the grenade that Stubbs has access to. He literally yanks his pancreas out and throws it, just tap the proper button and watch it explode. It’s great for taking out some of the enemies that like to bunch up or clean up a hallway full of enemies.

Stubbs also can command the undead he creates, sort of. As Stubbs bites and consumes brains the people bitten return as zombies. They tend to wander off and attack others. Stubbs can whistle when close enough to a group of infected and bring them over to where he needs them to fight. It kind of made me feel like some sort of undead commander. 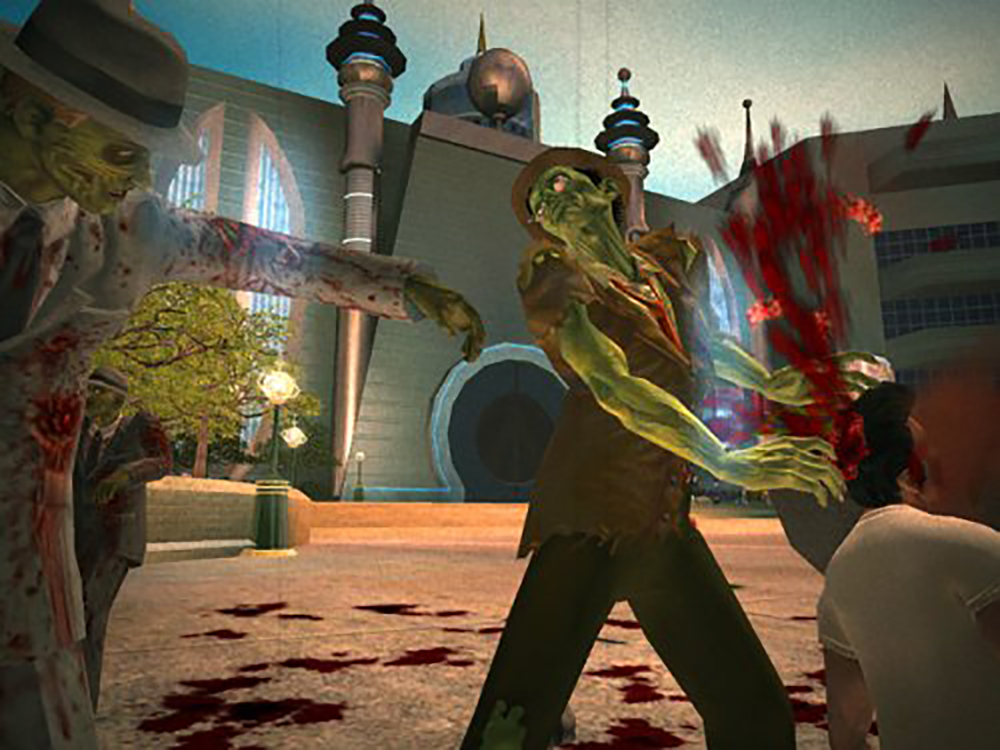 There were some bugs when playing Stubbs the Zombie in Rebel Without a Pulse. There was a mission where you’re in a car that launches sod. For a period of time, the game went completely silent. The car made no noise and occasionally an enemy would say a voice line but outside of that, it was an eerie silence.

Not sure if it is related to the above issue, but I was warned by the individual who sent me a code that I should turn off the in-game music. Since I was planning to live stream the game to make better use of my time, I needed to turn off the music to prevent getting a DMCA notice. It is great that the game features music from bands Death Cab for Cutie, a shame Twitch can’t seem to figure out how to better handle the DMCA issues.

The problem arose when a random, tongue-in-cheek dance-off happens, BUT MUSIC STILL PLAYS. I immediately had to scramble to shut off the game sound entirely to avoid a DMCA since the music that had started playing was dangerously close to a Michael Jackson song. While this could easily have not mattered if the DMCA issue was handled better by Twitch, and labels weren’t so money hungry.

I can’t help but think since I made absolutely sure the music was turned off for the game, the dance battle should have been silent or better yet skippable. It was pretty infuriating as a part of the game in general.

The most annoying issue with Stubbs the Zombie was when the game would crash. It happened twice but the second time was incredibly random. You can expect a game to crash after a few hours of playing. At this point, that’s the entire reason we have autosave capabilities, but to have the game crash less than ten minutes after opening is a little bit of a nuisance. 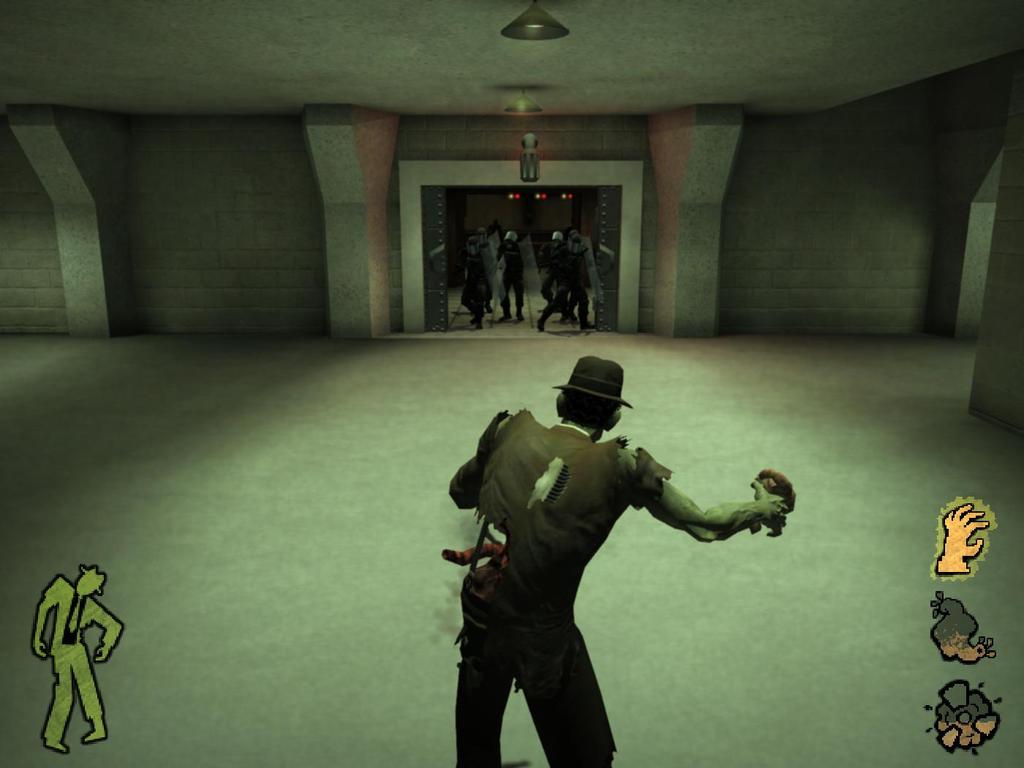 The plot to Stubbs the Zombie in Rebel Without a Pulse is, confusing at best and weak at worst. It’s a game about a zombie so your main goal should be infecting as many people as possible, right? That seems to only be sort of the case.

The shoestring plot is that base, but for some reason in one level, and so far one level only, Stubbs becomes obsessed with some woman. That woman is the center of affection for some guy and his singing quartet of friends. Stubbs chases to try to get her back and nothing really comes from it.

I blew up a bunch of quartet guys, but then half a level later I am in the police station, being shot at by police again. Then for next to no reason at all, I am in a dance-off with the chief of police? Tongue and cheek humor only works when it’s actually funny, switching between random areas and enemies while saying things that just float under the radar of being offensive by today’s standards, doesn’t work.

Speaking purely from my perspective, the game wasn’t super enjoyable. In fact, four months from now I doubt I will remember most of what happened. It got rather tiring jumping from random city local to random city local wandering around, just hoping I find my wherever my objective is hiding. Sometimes it was randomly behind several doors I just happened to walk by. That was after I had walked down several streets and tried to go into a bunch of different buildings with painted on nonexistent doors.

The only fun I can remember having, post the first hour, is when the cutscene is shown that has Stubbs arriving in a downtown almost Vegas-like area. He is confronted by a militia of ‘rednecks’ who actually put forth the only real challenge I had from an enemy to that point. They have shotguns and will swarm Stubbs a little more efficiently than the cops of previous levels will. Even when possessing one of them and firing back at them it still was the first real challenge, other than navigating to objectives in general. 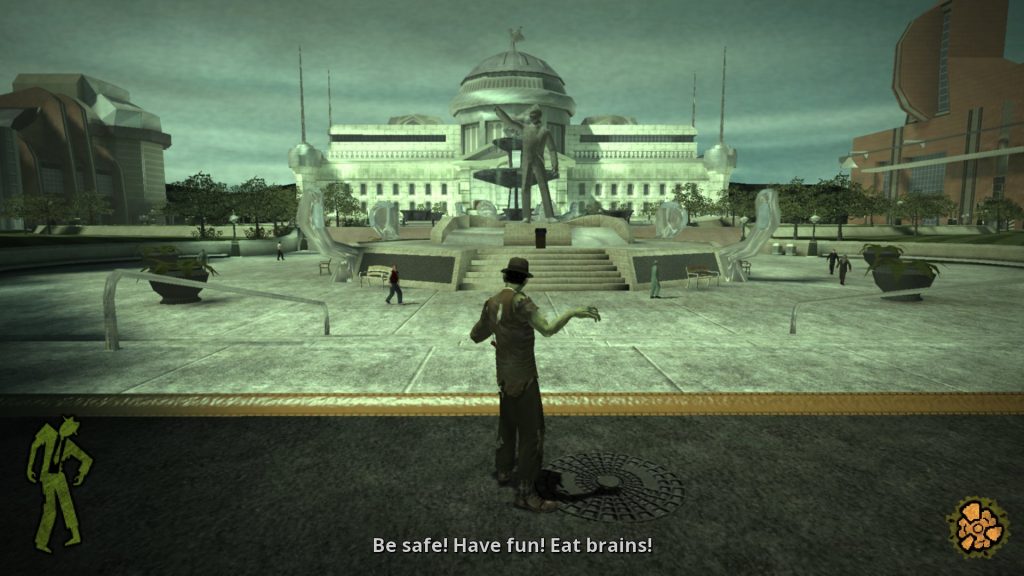 Stubbs the Zombie is a game I feel is better left in the past. The interest is of course there for people who are wanting to play the original game but don’t have access to the hardware to do so. Outside of that, maybe if you want some easy achievements and a pretty mindless experience go ahead and grab it. Outside of that I recommend shambling off to find another game.

Stubbs the Zombie is out now for PC, Xbox One, PlayStation 4, and Nintendo Switch