Marvel’s Spider-Man Miles Morales has Miles Morales coming out as the newest hero of New York. After training with Peter Parker Miles is placed in charge of New York and must contend with a new threat. The game remains loyal to the concepts that made the first game such as hit but allowing Miles to develop into his own hero. Complete with unique animations and eventually becomes his own Spider-Man. However, some of his choices lead to devastating consequences with little importance. 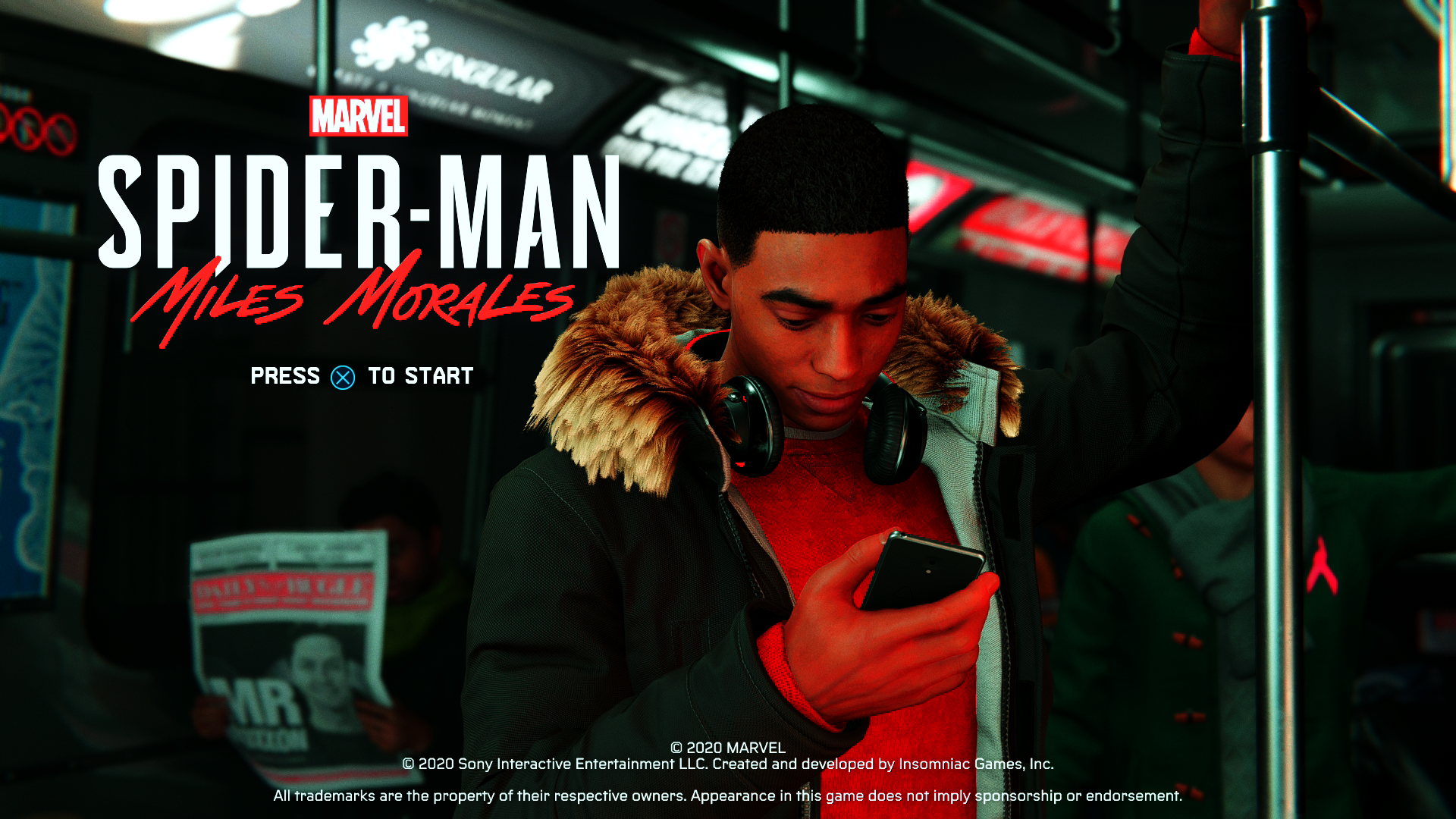 Marvel’s Spider-Man Miles Morales opens with a bang, just like Peter’s adventure. Here Rhino and several prisoners escape because of Miles, leading to a huge fight through the streets and a mall. With Miles having to take down Rhino after Peter is defeated, forcing Miles to tap into a unique ability of bio-electrical powers. Starting his journey to becoming a new type of Spider-Man.

Peter unfortunately has to leave New York and leads the city in Miles’ hand. At first, Miles is frightened but Peter believes in the young hero, giving Miles the confidence to handle such responsibility. It only takes a few hours after Peter leaves for a new threat to emerge.

A mafia organization called The Underground is seeking to take the position of lead crime family after Peter defeated the previous criminal gangs in Marvel’s Spider-Man. Led by the Tinkerer this gang is equipped with heavy weapons and money to back it up. On top of things, a new energy company has opened after Oscorp’s reputation dropped following the Devil Breath situation. Called Roxxom they’re seeking to change the world with a new energy source that just screams evil cooperation.

Miles is a terrific hero as he attempts to live up to Peter’s reputation. However, with his unique abilities and the help of his friend Ganke Miles develops into his own hero. Becoming a different Spider-Man for Harlem and New York while maintaining the same symbol Peter established.

Seeing Miles evolve into his own person was incredible. His powers play a vital role within the gameplay and story. With the enemies, he’ll encounter attempting to counter Mile’s unique bio-electrical powers. The issue comes with how the game deals with heavy consequences.

In Marvel’s Spider-Man Peter’s adventure was complemented with death and destruction. You saw people dying and suffering in the streets due to the havoc caused by the villains adding to the urgency of the situation, here no so much. Rhino charges through the streets of New York and heavily populated mall, a helicopter crashes and hits the side of a building with chucks of its falling onto a busy street, and so many more examples of carnage like this happen in the game. Yet no one dies or even is hurt, even the game addresses this JJ’s Just the Facts saying no one was hurt in this massive disasters. At some point, it’s too unbelievable, especially at the end of the game where most of the streets get destroyed and a massive explosion constantly ripples throughout the city.

The Tinkerer is also a strange villain in terms of how she acts. On one hand, she says she won’t hurt civilians but runs through the streets similar to Shocker in the first game. Shocker didn’t care if he hurt anyone but seeing someone who expresses that she doesn’t want to hurt innocent people then smashes cars and launches heavy explosions throughout a populated city doesn’t make sense. Miles has plenty of opportunities to defeat her but chooses not to for personal reasons but if the developers included how her actions were making people suffer, as seen by her actions, it would’ve added more weight to the dynamic.

Take Peter’s attempt to save Otto or Martin Lee from their hate. Otto was killing hundreds of people and Martin wanted to make Osborn suffer for his parent’s death. They both killed for their own personal means but Peter had to take them down or risk losing more people, however, he also attempted to save them from themselves. This dynamic is just not presented well with the Tinkerer especially when you find out what she plans to do. With the aftermath of her plan never taken into consideration.

Her narrative is expressed well at the end of the game. With Miles seeing the Tinkerer’s actions as a result of blind anger. It does make what she did more understandable but not as impactful. Without some sort of long-term consequence like found in the previous adventure her actions border on pointless. It was the actions of another character that accomplished what she set out to do. 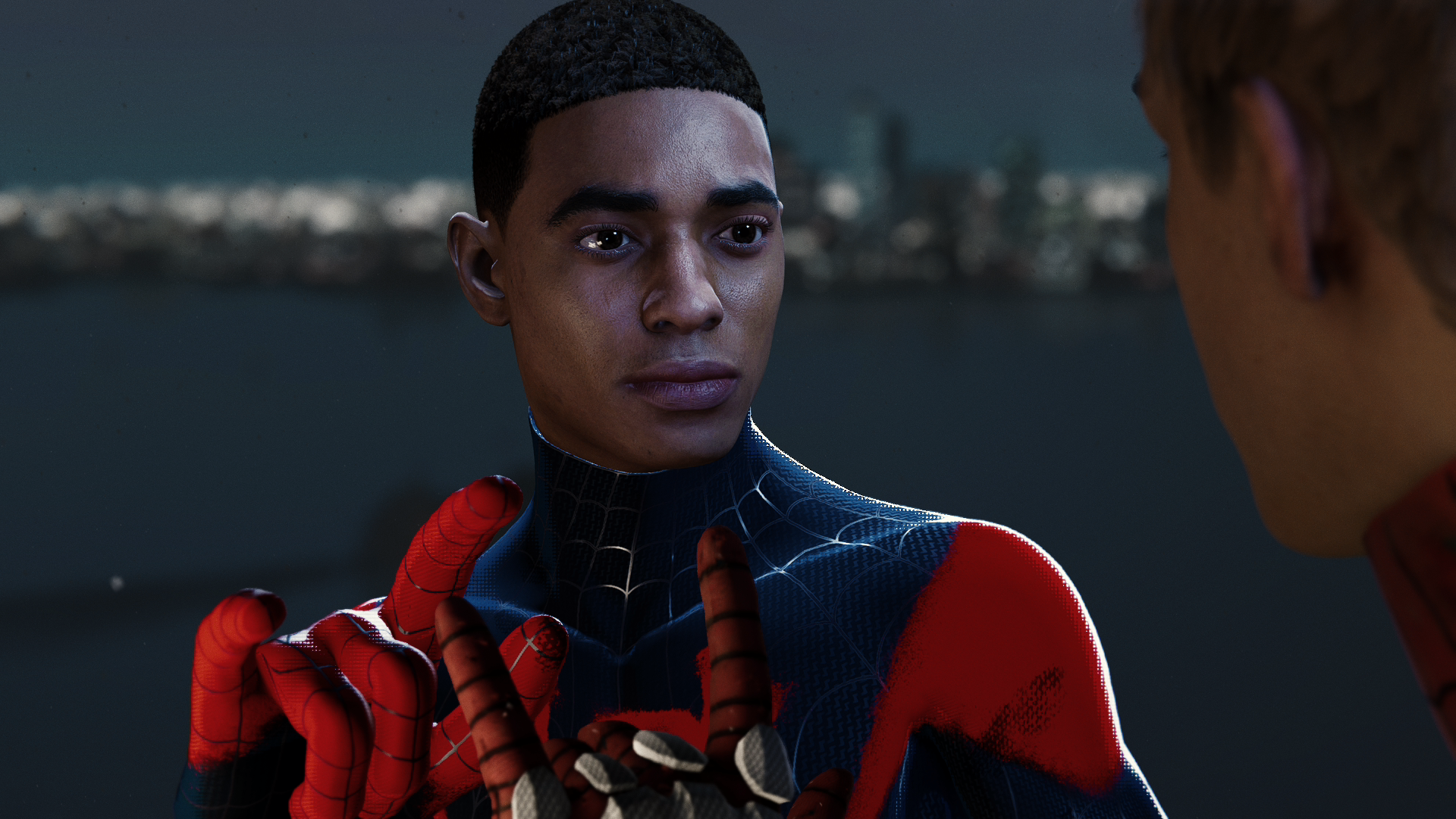 The game plays similar to Marvel’s Spider-Man but with unique twists. Miles is complete with unique suits, skill trees, and animations. He has a sense of swagger to his movements but also makes mistakes. He’ll perform a cool finishing move only to fall or when he misses a cool stunt when web-swinging and falls on his face. Miles has a degree of confidence in his skills that is expressed in his movements.

In terms of skills, much of Miles’ abilities are linked to his unique talents. This includes the bio-electrical attacks that allow Miles to destroy weapons and stun targets. Venom strikes serve a great deal in gameplay as The Underground uses weapons that can only be destroyed using Miles’ Venom attacks. There are also crimes and dynamic activities with these techniques in mind such as destroying technology or charging batteries.

Like Peter’s abilities Venom charges through combat and dodging. When charged Miles can perform 3 unique attacks including a punch, leap, or charge. You can chain these for some flashy attacks.

Cloaking is also present and allows Miles to go invisible. This can be pretty over-powered as it allows Miles to regain stealth or avoid being hit when critically low on health. Sometimes enemies will use thermal visors or scan the area to detect Miles but these are used rarely and usually not a threat.

You can engage in stealth or active combat. Stealth is pretty basic, avoid contact and take out enemies quickly. Your scanner allows you to see when enemies are being watched and their AI is pretty basic. Don’t expect Batman Arkham or Metal Gear Sold levels of awareness here. 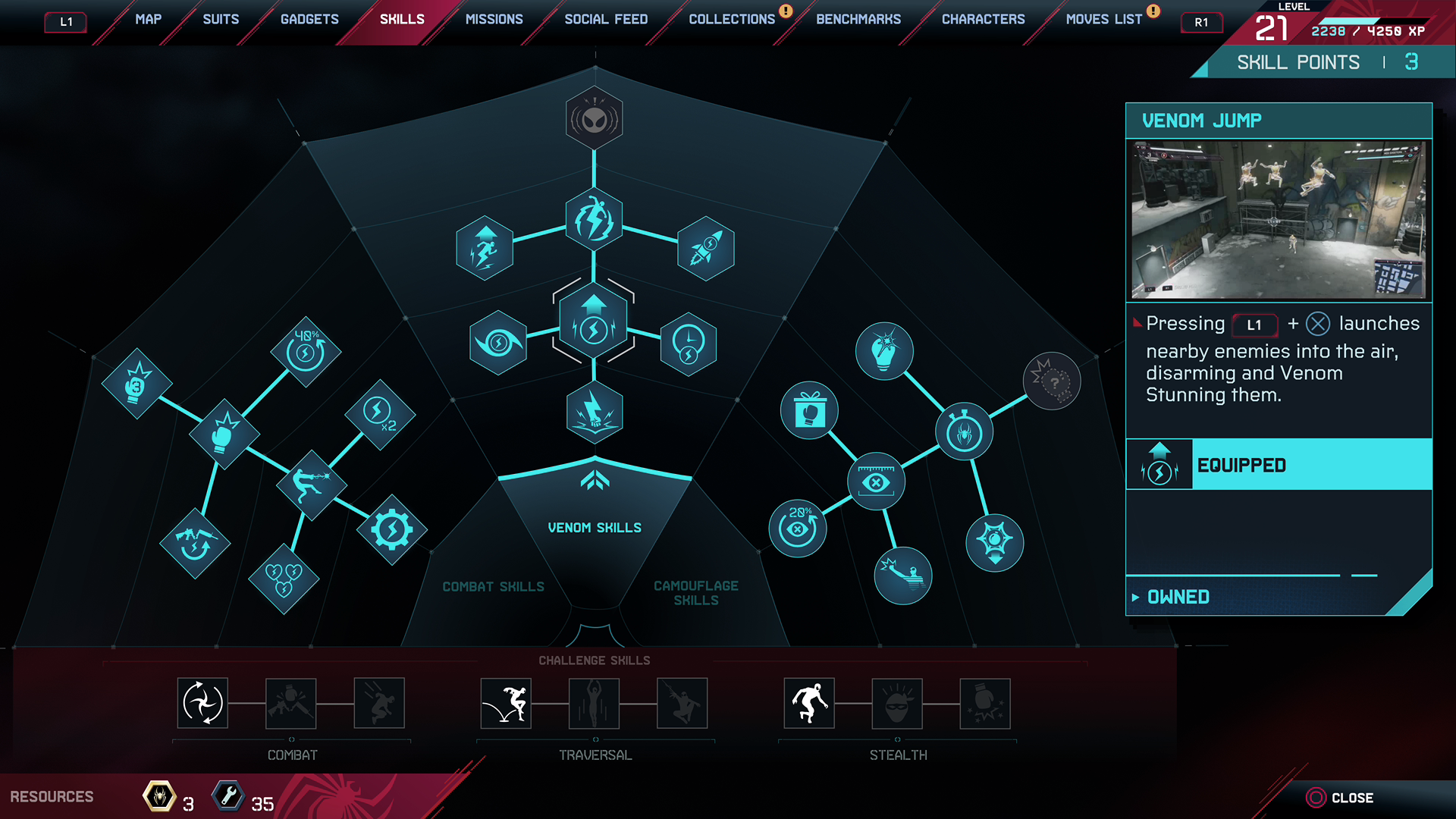 Combat is similar to the previous game. You can strike enemies and dodge when needed to perfect counterattacks. Gadgets have been altered to include a gravity bomb, AI drones, and an electrical mine. All of which can be upgraded by collecting tokens by completing missions and bonus objectives.

Boss fights remain the highlight of the adventure. There’s not as many since this is an expansion but each one is wonderfully crafted with lots of incredible moments. They’re not that challenging but they’re fun to play through.

Traveling through the city is still a job but the optional objectives can become repetitive. More unique missions have been added but most of them have you completing the same things over and over. Instead of backpacks now you have tech upgrades. The second time of doing things just reminds me of more Ubisoft busywork.

The game runs smoothly, especially in performance mode on the PS5. There are no loading screens but you can still choose to turn on the subway cutscenes if you want to see how Miles travels through the subways. However, I did experience multiple crashes and frame rate issues during the end game. These issues were more present on the PS4 Pro version. 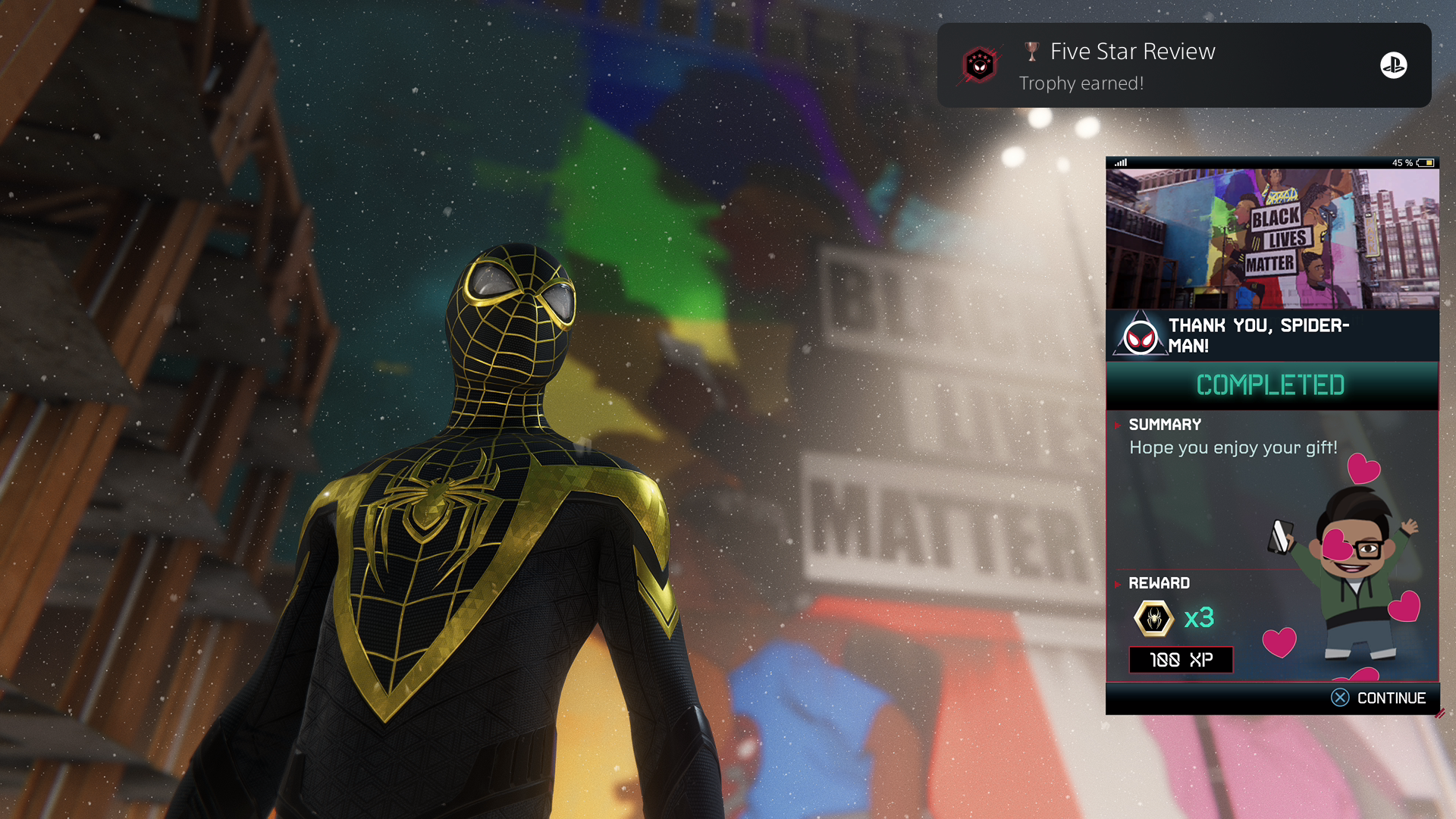