Every now and again a game comes along that meshes various genres and gameplay elements to such a degree that a stunning success is created. Ghostrunner makes players feel like a cyberpunk ninja and was released at the perfect time as Cyberpunk 2077 is right around the corner. Ghostrunner is a great example through graphics and gameplay of why the Cyberpunk genre is exploding in popularity.

The story of Ghostrunner revolves around a colossal skyscraper which acts as a small city. The tower is called Dharma and houses the remnants of humanity after the Burst, an indeterminate global catastrophe, which nearly extinguishes the population. The player or Ghostrunner must climb to the top of the tower to defeat Mara who took over the tower in a coup and turned life into a stereotypical cyberpunk dystopia.

I found the story quite intriguing as I played, though it was a bit difficult to keep current the situation at times as exposition is pontificated since players are trying to avoid, attack, and kill enemies. Despite the storytelling impediment, I am ecstatic that cutscenes are kept to a minimum thus allowing players to actually play the game, using a very Half-Life approach which gives players more time to absorb and ponder the narrative. 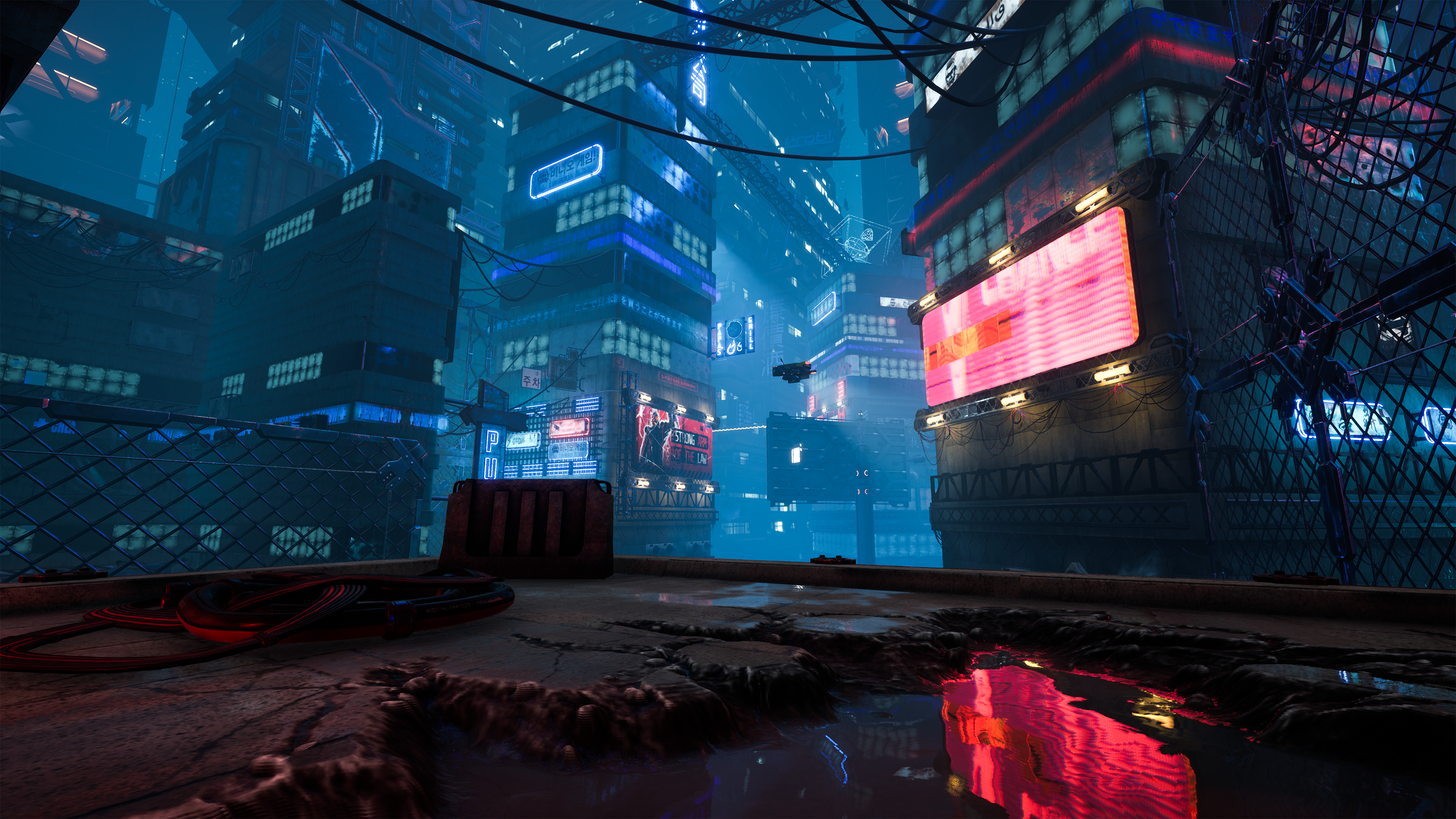 Ghostrunner uses a first-person perspective where players must run a gauntlet of obstacles and enemies per each level using only a katana. Every level of Ghostrunner is a trial and error run as players learn the layout of platforms, enemies, shield orbs, and the exit. The early levels are relatively simple in order to get players into the overall groove of Ghostrunner’s gameplay. As players progress levels become longer and much more difficult. The developers have done an exceedingly efficient job of teaching the player how to navigate and complete each section of the tower ascension.

Enemies begin as minor obstacles that are easily dispatched, however, as players get higher in the tower, enemies gain shield orbs that must be destroyed before they can be defeated. The aforementioned enemies also stay in the same position waiting for the player to come to them. Later in the game, players must face off against enemies that home in on the player while also simultaneously attempting to navigate the level and eliminate the stand-alone baddies, thus, things escalate quite quickly.

Each tower section can be completed in a multitude of ways as there are usually two to three ways of navigating the level, defeating enemies usually take priority but players can take multiple routes through the area as well as circle back to the beginning to re-evaluate the best possible course. The open nature of the level design is fantastic as it gives the creative minds of the players the ability to find their playstyle for the greatest outcome, though the learning curve can be steep. 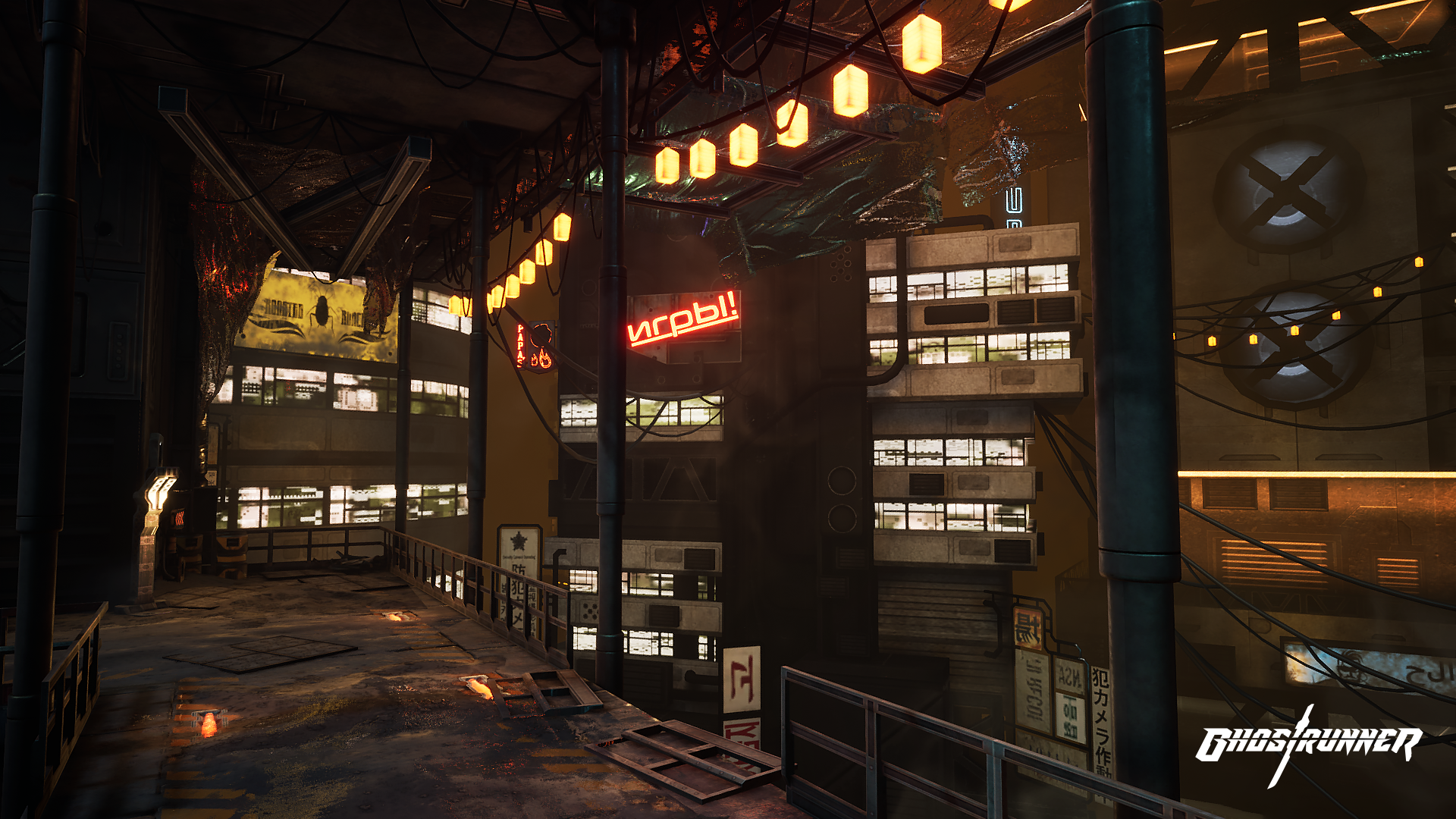 I should probably mention that Ghostrunner can be an extremely punishing game. While enemies only take a single hit to kill, the same is true for the player, leading to lots of deaths, trial, and error. I have grown to adore the difficulty of the Dark Souls and Sekiro, however, they are docile compared to the intricacy of Ghostrunner. As players progress, they unlock a grid system that can be used to install upgrades to the Ghostrunner.

The grid system is reminiscent of old-school inventory management systems from the Resident Evil games as each upgrade is a specific shape (a Tetris tribute) that must fit together on the limited grid. Some of the abilities will make traversing a bit easier such as highlighting enemies or making hidden objects and areas easier to spot.

Players in Ghostrunner will also gain special abilities not dependent on the grid system. The Ghostrunner will be able to wall-run, slow-time as well as dodging and deflecting bullets back at enemies. After all the enemies in a combat area have been eliminated, players can freely explore areas as they ascend to find new abilities, katanas, and lore bytes. It is genuinely amazing how the developers were able to make relatively closed and linear gameplay feel so wide open. 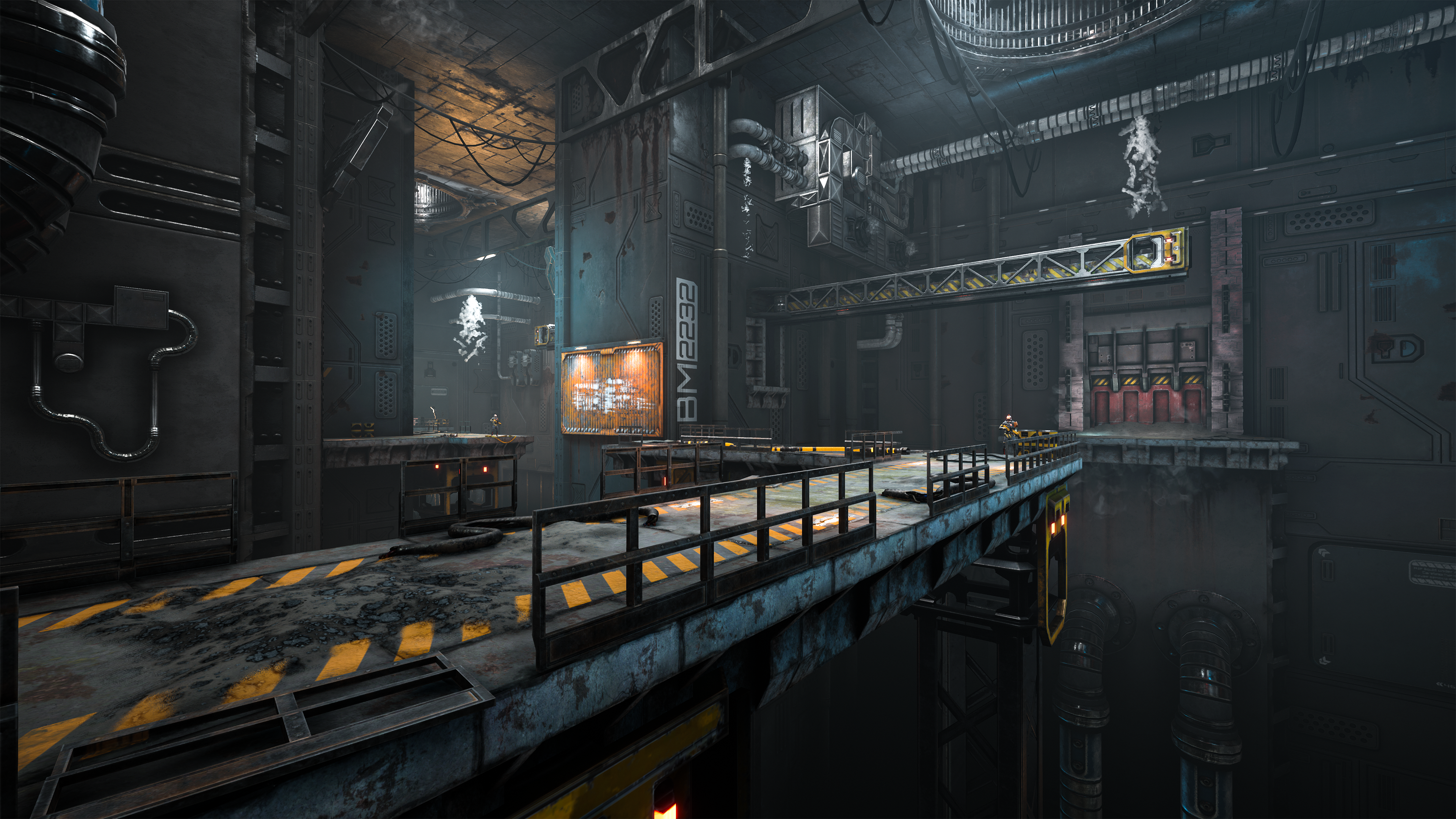 In the graphics menu, Ghostrunner has twenty different settings for players to adjust, nine-teen of those are available in Direct-X 11 mode while the twentieth, ray tracing, is only available with the Direct-X 12 API. The level of customization when it comes to graphics fidelity is extensive and appreciated as running the game on maximum settings at 3440×1440 was giving my graphics card a run for its money.

Even though the performance was not completely on my side, Ghostrunner is a stunning game in the graphical department. I honestly think Ghostrunner could give CD Projekt Red pause in the level of detail the developers fit into the game, the texture maps, lighting, and shadows give the game an almost uncanny valley impression at times.

Ghostrunner does support ray-traced reflections in the game, however, because it is simply an on and off switch, it does not allow players to pick the reflection resolution, so I decided to ignore it. I wanted to see how much ray tracing affected the visual quality versus performance and while the reflections do look very good, the performance hit is too massive for my liking.

I was initially running the game on epic settings while averaging 90 – 100+ frames-per-second, ray tracing plummeted framerate to under 40 frames-per-second. More control over how reflections are rendered would be better for allowing players to tweak the game and achieve higher framerates with greater visual fidelity. 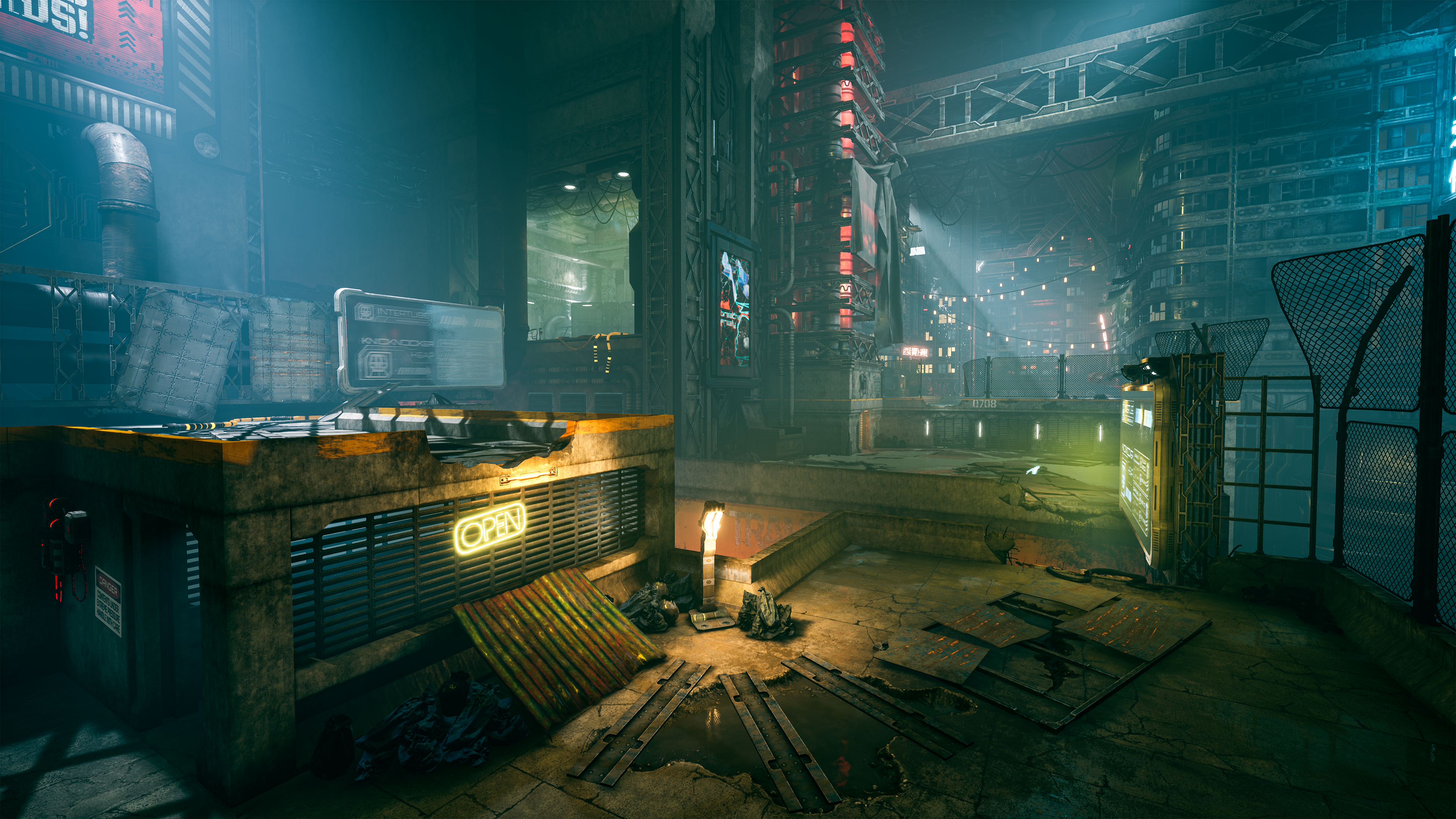 Ghostrunner’s soundtrack fits perfectly with its cyberpunk theme. The harmonious electronic melody blends exponentially with industrial bass and synthetic sound effects that make the player genuinely feel as though they are experiencing a dystopian authoritarian nightmare.

Enemy chatter and gunfire fit perfectly within the world as well as the various metal creaks and bumps as players run through the levels. The developers have given players maximum control with individual sliders for sound effects, music, voice, and master; something that really should be standard in 2020.

Ghostrunner is one of the greatest games I have played, not just this year, but of all time. The soundtrack and overall sound design gel perfectly with the art style and gameplay. Ghostrunner is a masterful looking game when the settings are cranked to the max.

The gameplay, while very difficult, is more fun than I have had in a long time when checking out a new game. I am excited for a sequel that can expand on the awesome mechanics that Ghostrunner introduces to players and a bit better ray-tracing support. Ghostrunner gets to go down in history as my very first legendary score.