It’s always great when a new character gets added to a game and seems to fit right in. Horizon has shown up in Apex Legends and feels right at home in the battle royale but not just as a playable character. She already has this warm and inviting attitude that makes her mesh really well with other characters. She’s already stepped into this sort of motherly role when interacting with Mirage. Which is fantastic for him, as his real mother is dealing with the effects of dementia or Alzheimers. You can hear the happiness when Mirage gets called Elliot by her and how excited he is to show her things he’s done or receive compliments from her. She has great interactions with Wattson as well.

When she was first shown off though I was worried that her ultimate would feel a little broken. While I could understand Respawn toning it down a bit I think overall her kit is in a pretty great spot. Let’s get to know our new favorite science mom, Horizon. As Above So Below

That is my favorite saying and she says it as she drops into the map. It has nothing to do with her guide I just wanted to gush for a second. Horizon’s kit is pretty solid overall. Her passive allows her to control her thrusters when falling so she actually has no fall animation. This means she can immediately start fighting after falling down.

Her secondary ability is a gravity lift. We saw these tested out last season and her portable version is already proving incredibly useful. There are standard uses such as lifting the team up on a roof or cliff for height advantage. Smarter players can use it for a solid movement strategy mid-fight. Throw one down and launch an enemy away from you or if you’re fighting inside temporarily pinning them to the roof for easy kills. You can also use them as I do to launch yourself behind the enemy team and get an easy flank. Another fun thing I like to do is throw the gravity lifts at the cars and watch them go flying into the distance or off of the map.

Her ultimate ability allows her to throw out a small black hole that works a lot like Zarya’s Graviton Surge from Overwatch. It sucks all players (even allies) into or near the center of the black hole. It holds them there but players can fight their way out if they are fast enough. If they aren’t open fire or throw a grenade for some effortless kills. Her black hole feels mostly balanced as she can throw it just like a gas canister from Caustic. It has an area of effect displayed as it is being set up. It is easy to get out of if you are far enough away from the center. Players can use it to block the view of rotations or pushes it. There are a lot of uses for it so feel free to get creative. 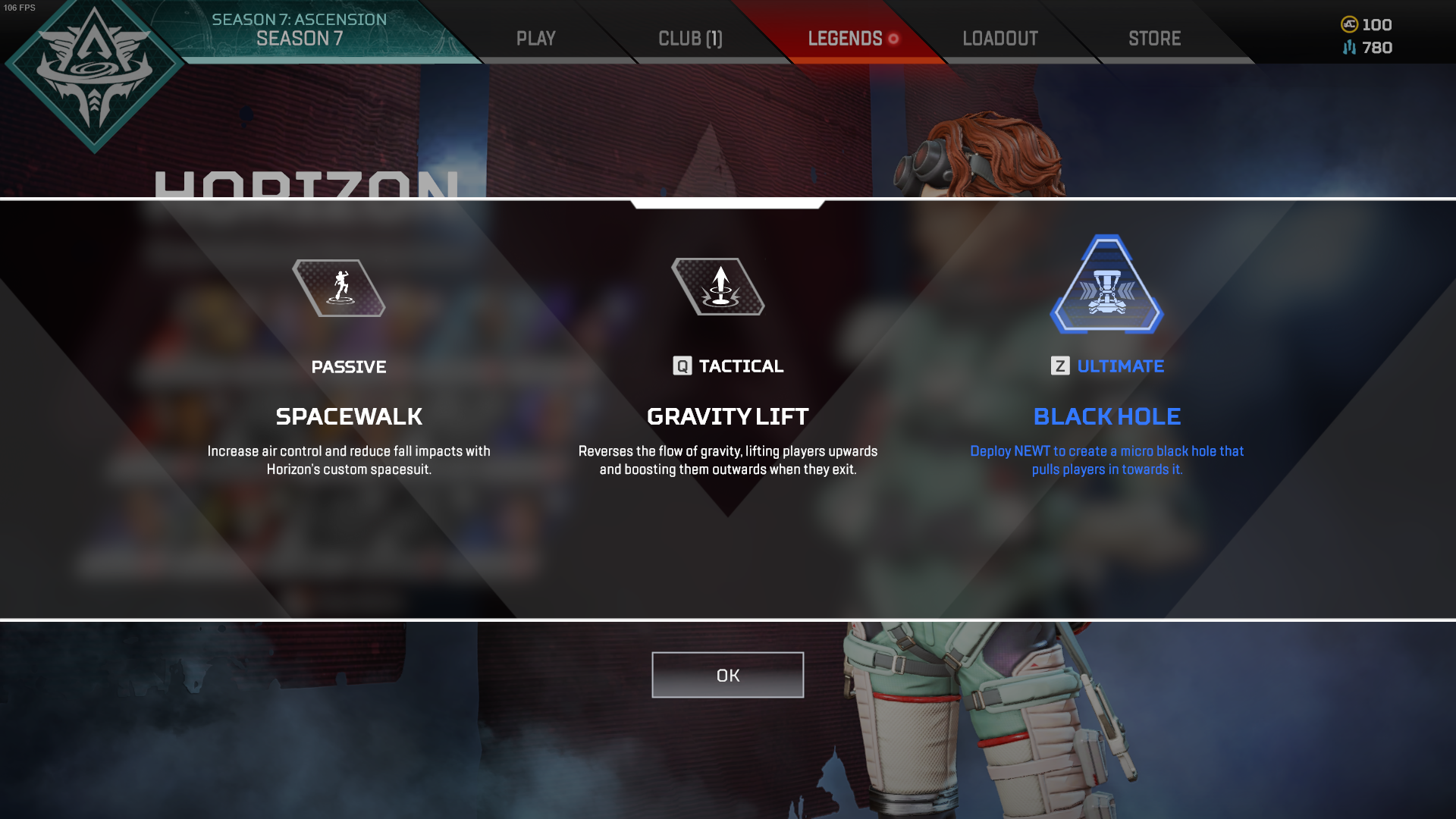 As far as weapons go for science mom, she feels like she has a lot of range to her. I know weapons depend on preference and skill level but she really feels useful at almost all ranges. Throw out the black hole and unleash hell with the R99 to wipe a squad. Grab a Wingman and knock some heads. You could even grab any of the snipers and gravity lift to get crazy angles on cars as they fly by.

When I run as Horizon I like to stick to assault rifles. The Hemlock or the R-301 put out great damage and offer lower recoil so you can control them easily enough. You can run the Havoc, it puts out great damage but the recoil on it is worse than you get with the R-301 or Hemlock if you don’t know how to control it.

As I said before the Wingman is a great secondary to run. With the new hop up that allows players to switch faster and aim faster, it is even more useful in fights. The Sentinel is also great for running around with iron sights on it. As long as you can hit your shot it’s an easy 71 damage. The same could be said for the Triple Take.

Horizon brought a great personality, humor, and new ways to attack the enemy in Season 7. I can’t wait to see what Respawn brings to the game next. Once they fix the Crypto glitch where Ramparts turret can be placed on it. I can’t wait for the ban wave to hit those that were caught using it to kill people. Let us know your experiences with Horizon below in the comments. If you have a different loadout or a great play you did with her tell us that too!