If there’s one thing I really miss right now, it’s laying on the beach. Earlier this year I was in Jamaica being a professional beach bum where my duties included: 1) doing nothing 2) eating/drinking everything and 3) a repeat of 1 and 2.

Now, unfortunately, we’ve been stuck at home due to a nasty global pandemic so the most traveling I have done is to the washroom. It’s at this point that I’m thankful that a game like Vacation Simulator exists.

From the creators of Job Simulator, Owlchemy Labs returns to the hilarious virtual world run by adorable tv-robots. This time, we’re going on vacation!

When you first put on your headset, in my case an Occulus Rift-S, you’re greeted by a pair of hilarious robots, some of the many robots you’ll come across on your virtual getaway. You’re also greeted by rich, cartoony visuals that are appealing and never assault the senses like other hyper-realistic virtual reality games.

This is shown off through the three main worlds available in the game: a beach resort, a forest camp, and a ski-chalet. Each of these unique environments has a great sense of place as these hilarious robots try to simulate how humans perceive a vacation.

The beach environment is your typical robot-controlled beaches: you can build sandcastles, grill a burger, play in the water in a fairly large space with plenty of other mini-games to interact with. Both the forest and snow levels also feature a wonderfully realized environment with unique mini-games in each of them.

Even though the visual fidelity isn’t as high as more contemporary virtual reality games, it is its art and sound design that makes the world such a relaxing, pleasing world to just mess around in. 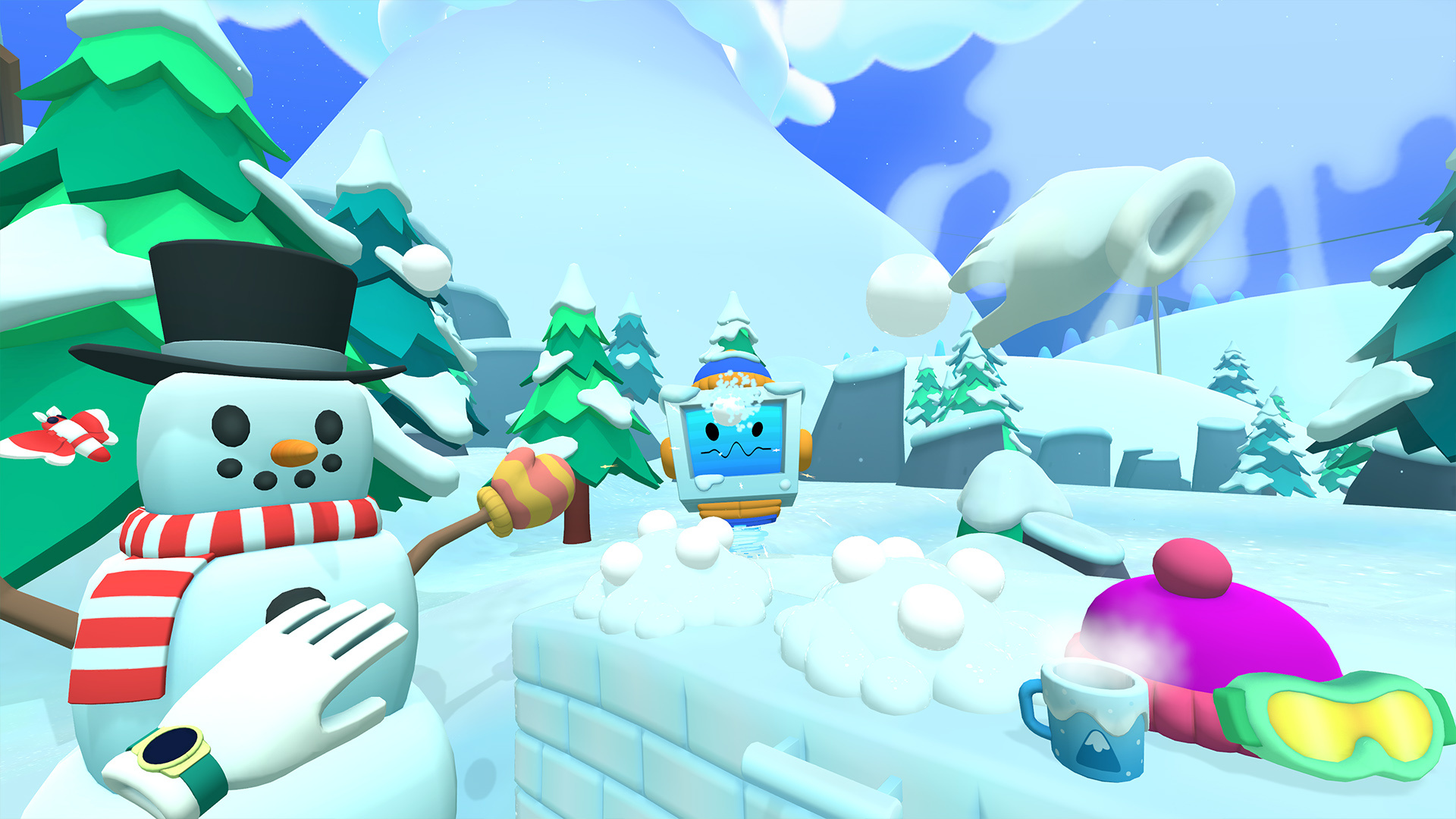 I admit it: I kept throwing snowballs at this adorable bot. Am I a monster?

It wouldn’t be a vacation without the hardworking robots of Vacation Simulator who are both hilarious and sweet in their own non-emotional way. There’s always an instance when a robot is explaining something to you in the most human voice, only to end a sentence with a robotic line. Regardless of how over played this gag gets, I always give in to a chuckle and a big smile.

There’s also a very thin storyline that I wish was explored more. The two main robots that are your guides on this vacation constantly argue whether data and statistics are more important than just having fun. Having robots discuss whether humans are too robotic would have been an interesting sub-narrative alongside the dumb fun of the game.

From the start Vacation Simulator is very invested in its world: all the menu’s and UI is integrated into your environment and your handy-menu-backpack as opposed to a disembodied menu of some sort. This commitment to the virtual space of the game is what sets it apart from many virtual reality games where the immersion shatters the second you pull up a regular video-game menu. With this focus on interactivity, I was able to actually feel like I was a part of it when playing around with the many objects, mechanics, devices, and mini-games throughout the three worlds. 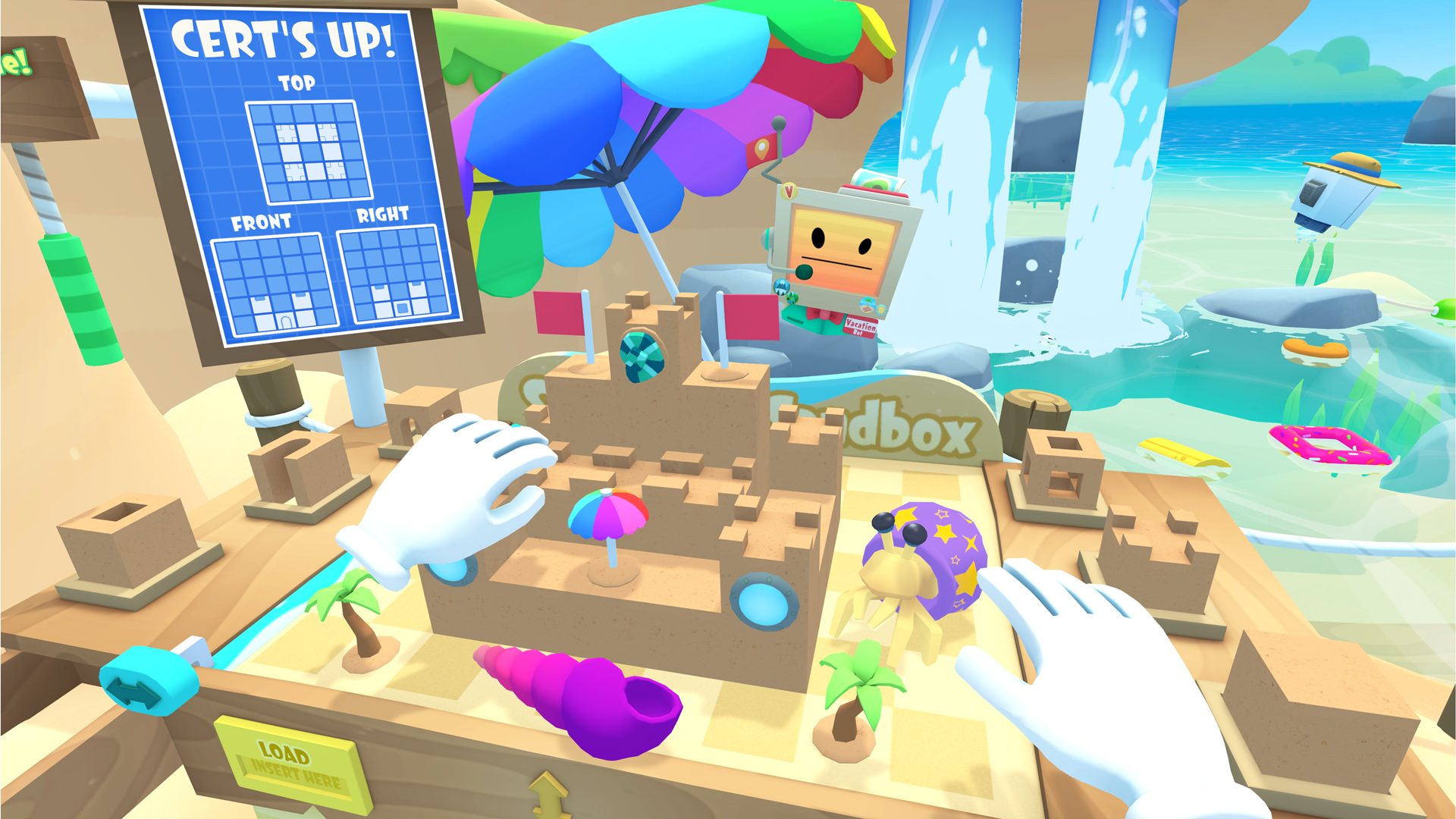 Interacting with the world is a treat, I just wish I could walk around in it naturally.

Vacation Simulator has a host of unique mini-games that take advantage of the environment and the interactivity of virtual reality as a medium. Just gently waving your hands across the water makes splashes, you wave to robots to interact with them but my absolute favorite has to be the various snack bards/kitchens that are located in the game.

You get this virtual desk, which can be adjusted within the world itself thanks to a great eye for accessibility, where you have various ingredients and appliances. At the chalet, I decided to make some waffles by pouring the mix into a waffle maker and pouring some syrup on top. I then decided to put the syrup bottle into the waffle just to, you know, see the world burn. 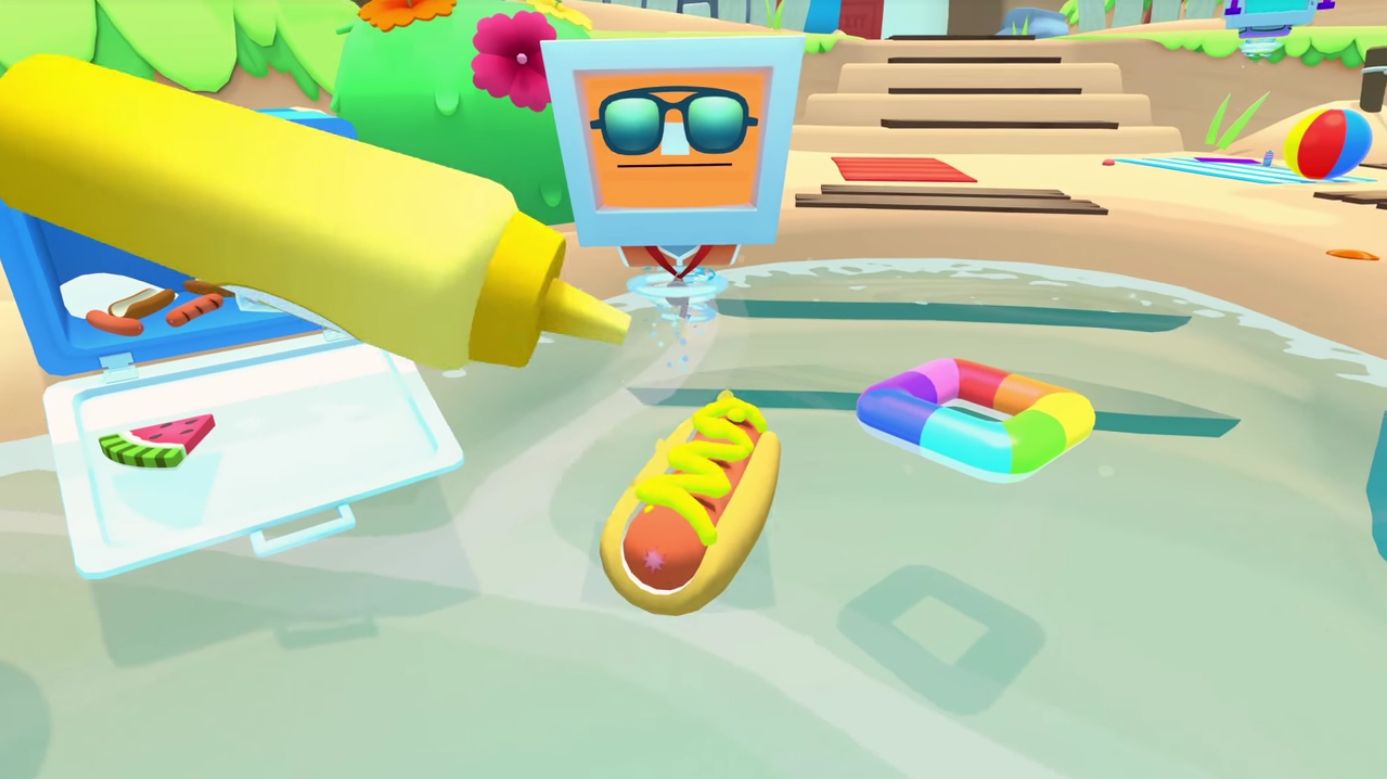 It’s really weird how much I love making virtual food.

The waffle maker smashed it into a bottle-shaped waffle, I couldn’t stop laughing.

Vacation Simulator‘s greatest strength is just that, making hilarious situations by just interacting with the world and seeing how these virtual objects work with each other. While I love the mini-games, especially ice-sculpting and catching fish, I loved the variety of interaction within the world itself. The only thing holding back this interaction is the fact that you can only teleport to pre-designated spots as opposed to freely exploring the space. This made movement feel very limited which is a shame because the interaction with objects feels so diverse.

After the mini-games are done, there’s little much to keep you in paradise unless you really loved a particular mini-game. But for the time that I did spend in this wonderfully wacky vacation, I had a fun time.

Even though the game came out last year, I’m a bit thankful I’m playing it right now. I don’t think I would have appreciated a virtual escape as much last year as I do now during a global, travel-restricting pandemic. While VR games like Half-Life: Alyx and Boneworks are the pinnacle of virtual reality at the moment, they’re not the type of games to play when you’re feeling a bit boxed in and stressed.

Owlchemy Labs combines unique interaction with some truly hilarious robot characters to create a fun getaway and a great introduction for new virtual reality players and for the veterans who need a break from shooting at stuff.

Vacation Simulator is a lot of fun for the price, for what you experience, and there’s a lot more coming soon with Vacation Simulator: Back to Job where the tables turn and it’s the robots turn for a little fun in the sun.

Have you played Vacation Simulator? What did you think about it? Tell us in the comment section below.