Since the commencement of videogames in the consumer market, experimentation has led the industry to create unique experiences that have yet to be adequately replicated in other forms of media. As the medium has matured, various genres have sprung forth in a culmination of stagnation. BPM attempts to break this pattern by combining two gaming genres that really should not fit together, rhythm and first-person shooter, but meld into a surprisingly fun cohesive occurrence.

BPM: Bullets Per Minute is a rhythm-based first-person shooter that merges time-signature accuracy of games similar to Curse of the Necrodancer and the fast-paced adrenaline-pumping action of Doom. I honestly did not think this mash-up could work, but I am glad to have been proven wrong. It takes a little time to get used to the gameplay as shooting must be done to the beat, as well as reloading and dodging. Guns can have up to three separate states of animation for reloading ammunition which must be completed to the beat. Jumping is the only action that can be taken during the off beats, so players who were not blessed with the gift of moving to the beat, this game is not going to be entertaining.

It took me a little over an hour to figure out the learning curve which may frustrate some players but was overall a rewarding and satisfying lesson. It will take some time, for new players, to get used to the rhythm, weapon variety, and enemy types, but as players develop their character stats BPM gets easier and more fun. BPM has two difficulty settings, easy and hard, with some additional menu options for players to tweak the gameplay. For players that have a hard time adjusting to the musical playstyle, they can activate a menu option called auto rhythm which allows players the ability to shoot and reload without needing to time it to the beat. 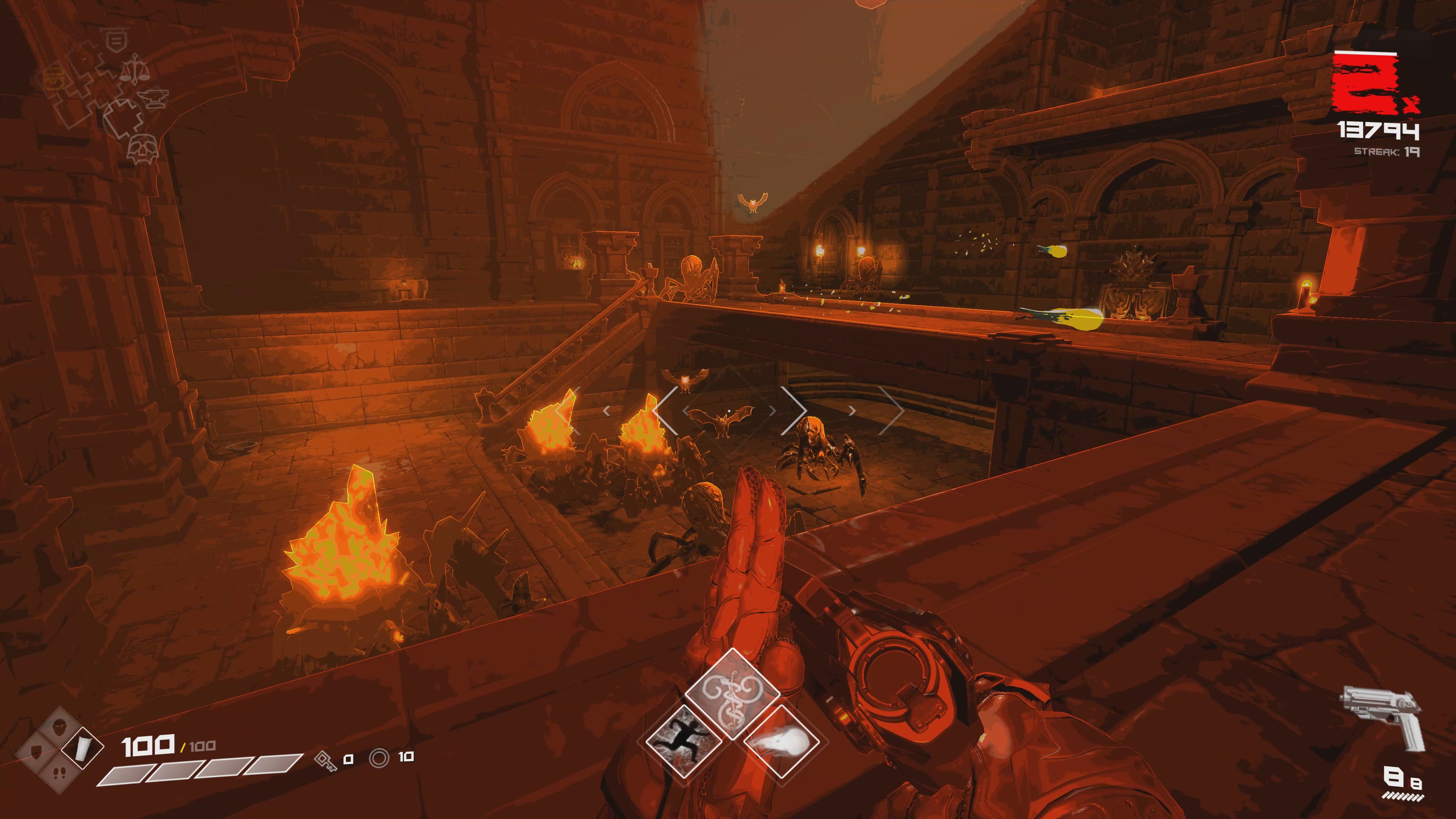 BPM: Bullets Per Minute is a rogue-like game, there are a total of eight levels with the final level being strictly a boss fight. Each level is procedurally generated per run, as well as divided into separate rooms the player must clear of enemies before proceeding to the next. As players progress, they will be able to visit several vendors who will disperse weapons, armor, and health potions. As players spend money with each vendor, they gain a loyalty score which then unlocks more items and weapons for players to purchase. If a run is going particularly well coin drops are quite high, then players will be able to deposit some of the coins at a bank which can be withdrawn in a later, less successful run.

Players who have played Enter the Gungeon will be familiar with the concept. Each run (completing all levels) took me an average of forty-five to seventy-five minutes to complete depending on how generous or limited the random weapon and item drops provided. Being rogue-like, BPM shows no mercy for players who die, as there are no continues and players are forced to start from the beginning. 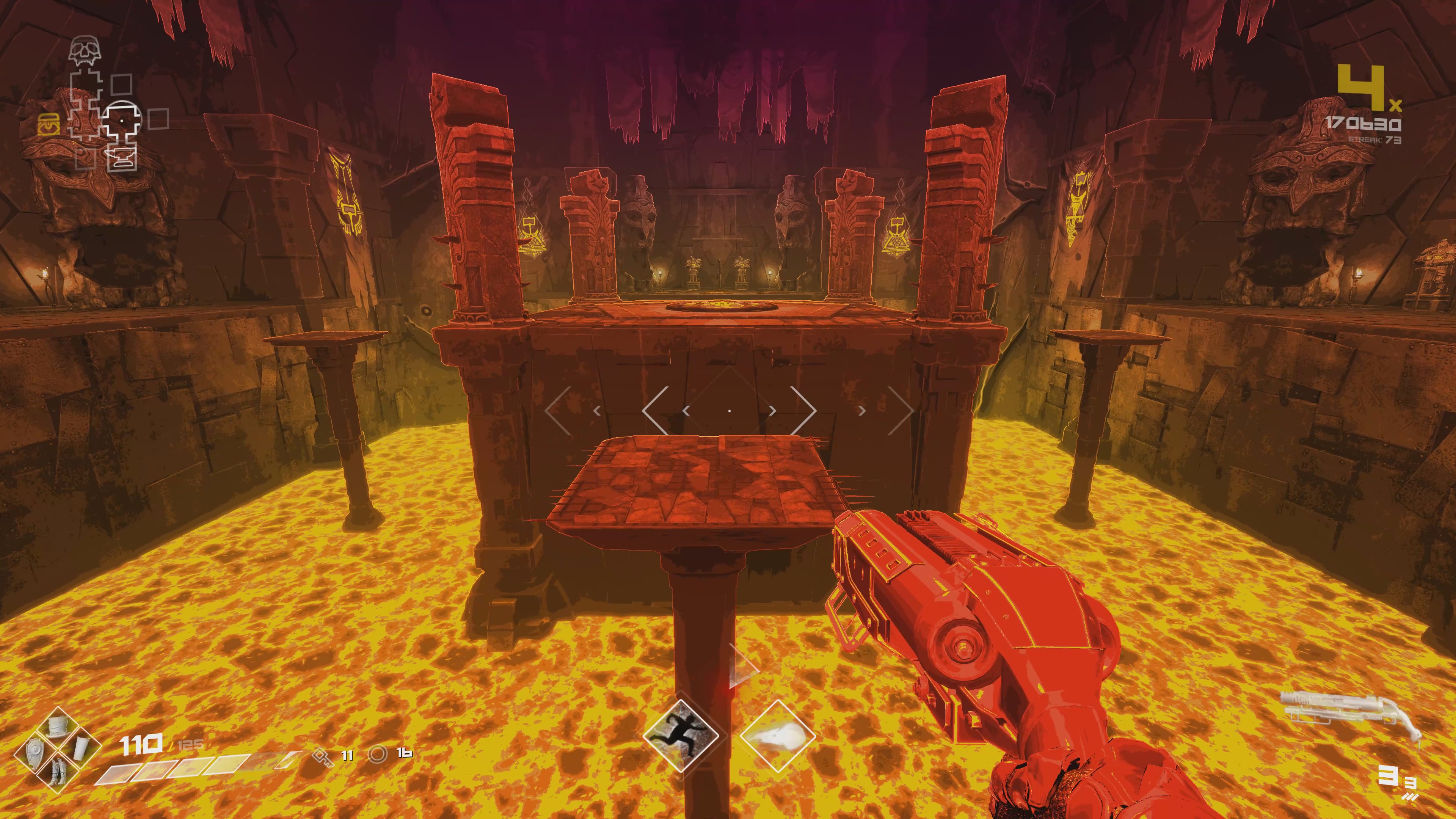 The level design in BPM is fun but repetitive, the layout of many of the rooms are very wide and open. Unfortunately, even when rooms are a bit more cluttered the enemy AI does not take advantage of the layout. Much of the time when I entered a new room with enemies; I could continuously beat the artificial intelligence by simply strafing from side to side or in a circular motion. As players advance to the end of the run, enemy types change a bit in variety but could be better expanded as the basic enemy attacks remain the same regardless of the mesh overlay.

The art style does not help the level design, combat, or enjoyment in any way. BPM has heavy saturation filters that shift from orange, in the opening levels to red in the middle levels and monotone towards the end of the game. Enemies can blend into the background a bit too easily which made it frustrating as I was constantly taking damage but could not see the enemy due to color gradients. I attempted to play around with the saturation settings in the graphics options but could not dial-in effective color levels. Regarding graphics options, there are few standard settings but nothing crazy or out of the ordinary. In theory, this game should run on lower-end PC hardware without too much issue. 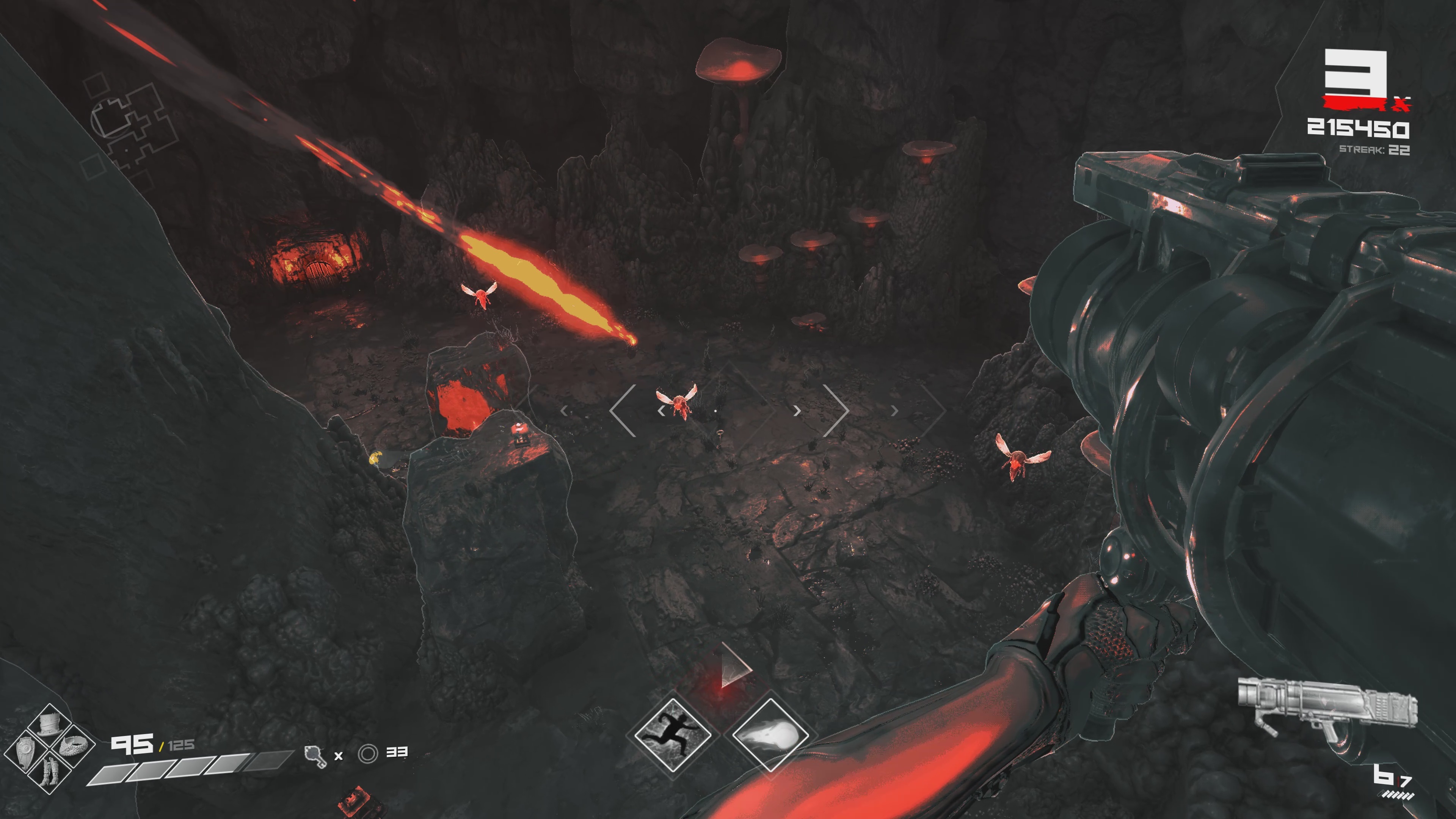 The gun assortment in Bullets Per Minute is quite astonishing, despite twenty-eight runs through the game, I still have not discovered them all. Players will have access to several pistols, shotguns, assault rifles, a chain-gun, rocket launcher, grenade launcher, sub-machine guns, some energy weapons, and a Doom styled BFG. Speaking of rocket launchers, players can rocket jump just for fun or reach some out of the way platforms and ledges. Players also have access to various gear which will boost stats such as damage, health regeneration, shields, and health increases. Enemies, when defeated may drop coins that can be used to purchase items from the vendors or make offerings to various statues for status effect upgrades. Some enemies may also drop keys which can be used to open locked chests for gear or the library which will unlock special abilities for each character.

At the start of BPM, players only have access to one character but as they beat the runs the other characters will unlock. Each character has a different starting weapon, buffs, and stats. For instance, one of the characters has the ability to fly but only takes one hit to kill. Another character will be able to use energy powers such as throwing fireballs infinitely but cannot pick up any of the game’s weapons. The developers have given players a nice variety of characters to play with and ultimately try to push players to beat the game on the hardest difficulty with each.

When starting out in Bullets Per Minute, I was at the mercy of the random drops throughout the game. As I played and unlocked characters and upgraded my loyalty with the vendors I was then able to start creating specified builds for specific playstyles. Players will be able to create a character that focuses’ on enemy damage or could essentially make themselves invincible via the vampire perk on gear which heals themselves as they do damage. What initially seemed like an afterthought via my first run is a very in-depth gameplay mechanic. 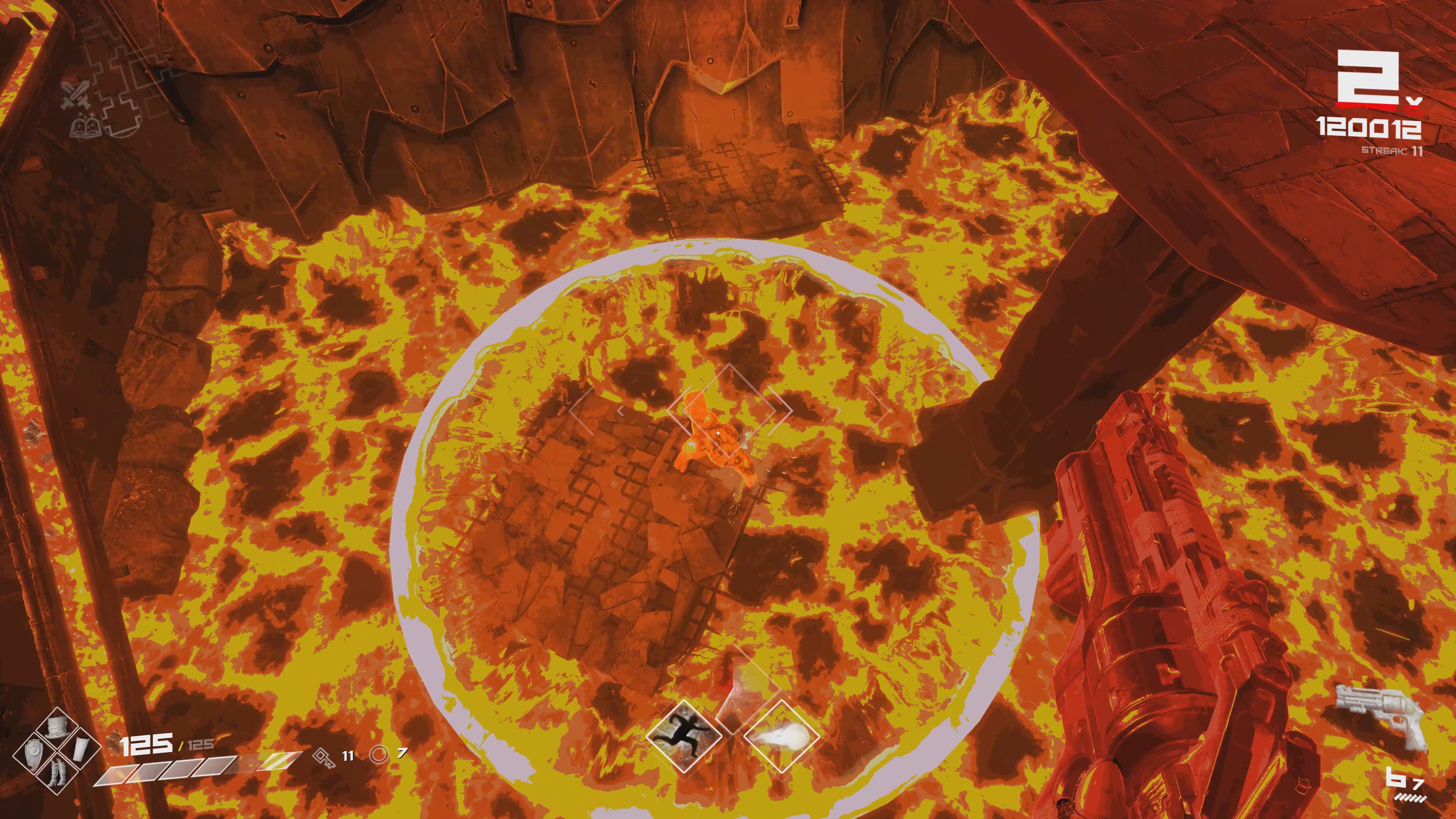 The music in BPM is legendary, even more memorable than the greatest game soundtrack to grace our ears, Doom. The guitar riffs never get tiring and mixed with the trance-styled beat and bass harkens to awesome bands such as Kamelot, Nightwish, and Epica. The fast-paced action feels more fun and intense with the fantastic score which meshes very well with the sound effects of guns and enemies; nothing feels out of place.

Overall Bullets Per Minute is a fantastic game that surprised me as I never imagined the rhythm and shooter genres could mix so well together. Players who love Doom for its gameplay and music will most certainly enjoy BPM. The art-style leaves much to be desired that will hopefully be fixed in a sequel. BPM is an awesome game and hopefully will spawn a new category of music shooter that the masses will adopt and enjoy.