Originally, Nerd Street Gamers and Spectacor Gaming were throwing an all-women Valorant esports tournament on September 12th. However, recently both organizations have just partnered with Riot Games to make the largest all-women Valorant tournament even bigger. Instead of just the original one-day, eight-team event, they are now extending it to a three-day, twelve-team tournament and raising the stakes from $10,000 to a $50,000 prize pool over the course of September 11-13th.

In addition to T1 Entertainment & Sports and G FUEL, Riot Games joins the lineup of event sponsors in their latest move to make the FTW Summer Showdown an official VALORANT Ignition Series event. 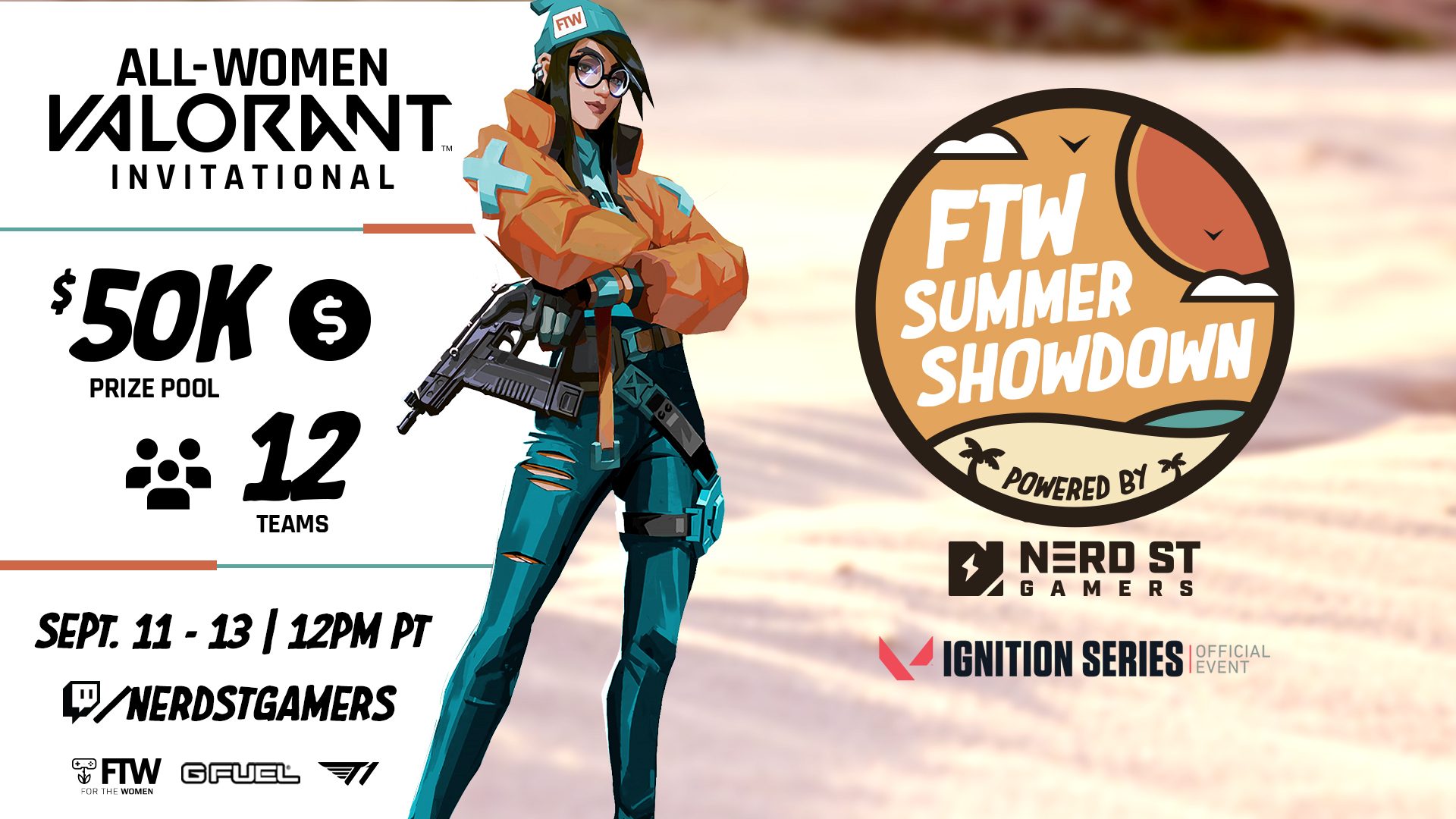 “The VALORANT Ignition Series is all about showcasing the best talent of our community, and we want to use our platform to celebrate those who do great things,” said Anna Donlon, Executive Producer of Valorant at Riot Games. “Competing as a female in games is a daunting task for many reasons, so when we heard of Nerd Street Gamers’ and Spectacor Gaming’s FTW Summer Showdown, we knew we wanted to throw our support behind the tournament and elevate it to the level of our VALORANT Ignition Series.”

The FTW Summer Showdown features eight amateurs, professional, and content creator teams that have been extended an invitation, with an additional four amateur team spots that were secured through a qualifier tournament.  GALorants, a women’s Valorant Discord community, hosted the qualifier tournament on Saturday, September 5, where the winning teams secured a portion of the $1,000 prize pot and the best four teams will face off against top female Valorant players and streamers in the official $50,000 Showdown taking place September 11-13.

VALORANT fans can tune in to the FTW Summer Showdown competition on Friday, September 11th through Sunday, September 13th starting at 5PM ET each day on twitch.tv/nerdstgamers.

Nerd Street Gamers and Spectacor Gaming will be partnering to host the largest all-women Valorant tournament on Saturday, September 12th at 3PM ET.  Sponsored by T1 Entertainment & Sports and G FUEL, the FTW Summer Showdown will consist of eight all-female esports teams that will compete for a piece of the $10,000 prize pool. 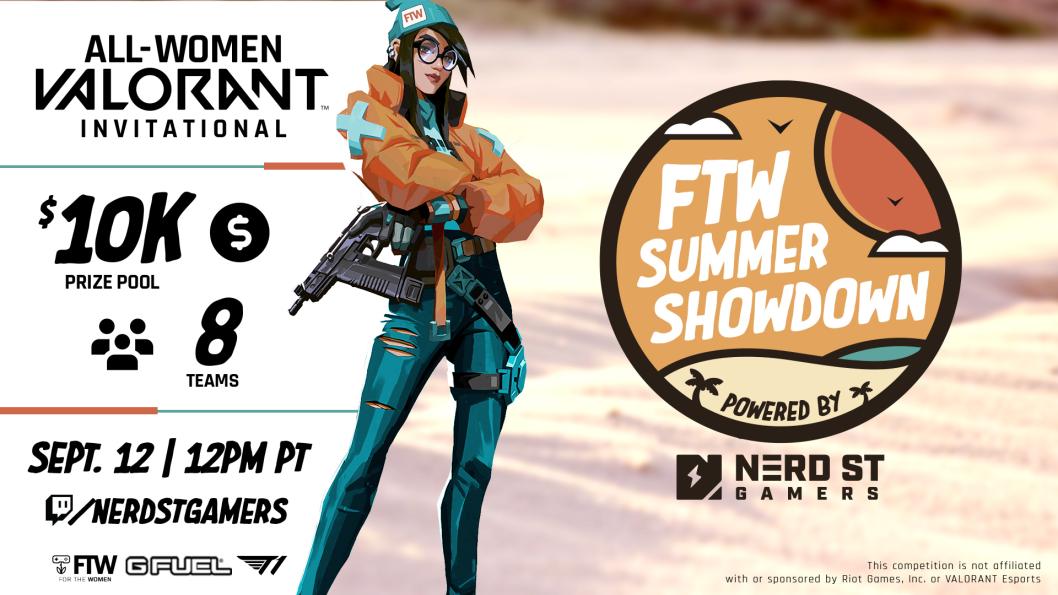 “We want to give more women a seat at the table in this industry – both for competitors and for women seeking a career in esports,” said Paige Funk, Senior Marketing Director at Nerd Street Gamers. “We’re excited to team up with Spectacor Gaming, T1, and G FUEL to host our first all-women VALORANT invitational and spotlight female gamers who are making strides in the industry. From the players to the logistical staff, this tournament is a testament to the power that women have to drive the gaming industry forward today and in the future.”

For those that are unfamiliar, the FTW: Summer Showdown tournament is part of a larger inclusion initiative, FTW: For The Women.  Spectacor Gaming launched its women in gaming resource group in 2019 to connect, support, and inspire the growth and advancement of women across all sectors of the gaming landscape.  By partnering up with Nerd Street Gamers, FTW has expanded its mission to champion an inclusive space for women and their allies by empowering them through networking, professional growth opportunities, and tournaments that help drive the industry forward.

“Since FTW’s inception, we knew we wanted to create unique opportunities for women to showcase their talent through esports tournaments and inspire the next generation of gamers,” said Spectacor Gaming’s Meredith Weber, Co-Founder of FTW.  “We’re thrilled to expand our partnership with Nerd Street Gamers to power our first all-women tournament and were drawn to Valorant as our first title since many of the game’s core values align with FTW’s mission, like being triumphant through teamwork, committing to respect and empathy, and protecting your team and community.”

And G FUEL isn’t just coming on as a sponsor, as they will have five of their own ambassadors from G FUEL that will also be competing. “Spectacor Gaming and Nerd Street Gamers have been leading a powerful initiative to elevate women in gaming, and we’re honored to support their efforts as a partner of their first FTW tournament,” said Cliff Morgan, Founder and CEO at G FUEL. “We’re looking forward to a memorable event and milestone for women gamers.”

The FTW Summer Showdown features seven professional and content creator teams that will be announced at a later date, with one spot remaining open for an amateur team to fill via a qualifier event.

GALorants, a women’s Valorant Discord community, is hosting the qualifier tournament on Saturday, September 5th where competing teams will have the opportunity to secure a portion of the $1,000 prize pot. The winning team will face off against top female Valorant players and streamers in the official $10,000 Showdown on September 12th.

The qualifiers are open to women and those interested in competing can register here or tune in to watch on Saturday, September 5 at 6:15pm ET on twitch.tv/nerdstgamers. 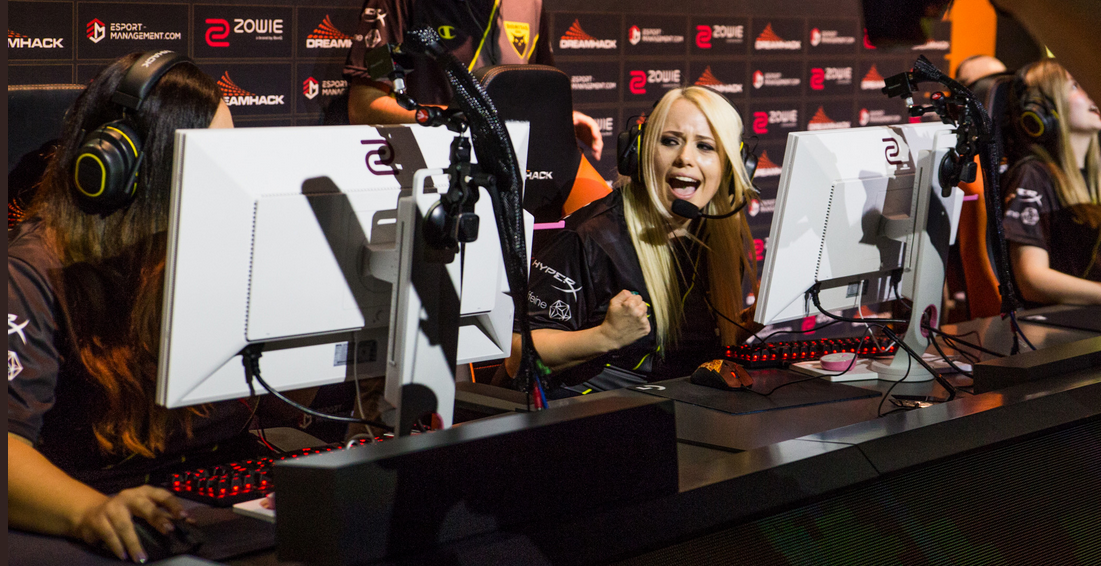 Valorant fans can tune in to the FTW Summer Showdown competition on Saturday, September 12 at 3PM ET on twitch.tv/nerdstgamers. Broadcast production and tournament operations will be powered by Nerd Street Gamers.

Don’t miss out on all the fun on September 12th!

Are you as excited to see this all-women competition as we are here at GAW? Tell us in the comment section below!