Sucker Punch’s Ghost of Tsushima dethroned fellow PlayStation 4 exclusive The Last of Us Part II to take the top spot in the sales charts in July, according to The NPD group. Paper Mario: The Origami King, also released in July, came in third behind Ghost of Tsushima and Call of Duty: Modern Warfare. 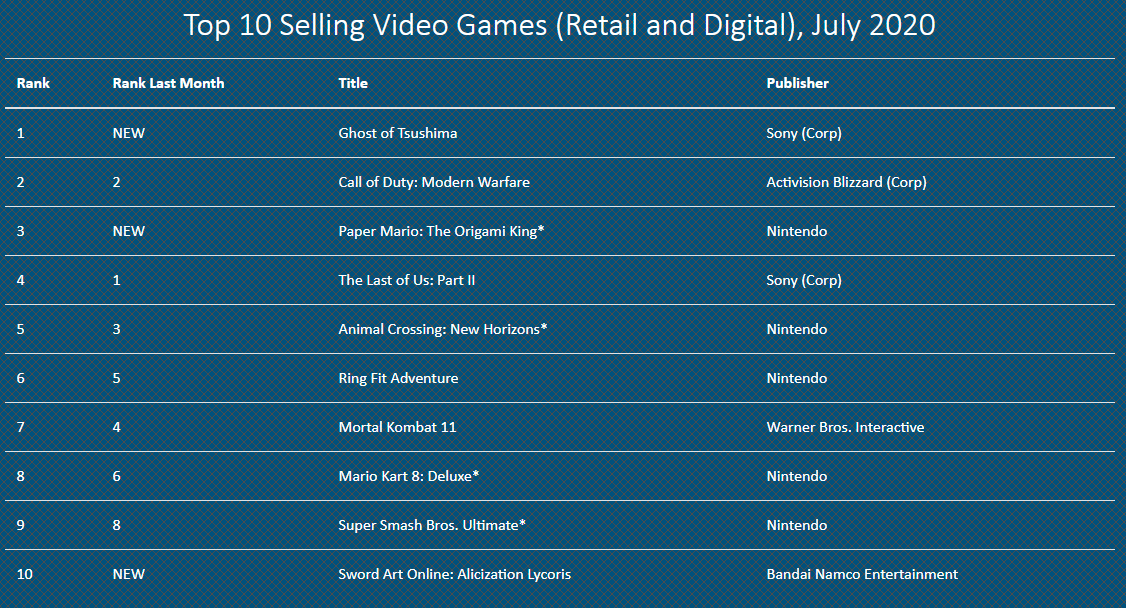 It is worth noting that Nintendo doesn’t supply the numbers for digital sales on the eShop to The NPD, and with July’s numbers you can see no games published by Take-Two Interactive are on the list. In a statement to GamesIndustry.biz, Take-Two confirmed it did not supply digital sales data to The NPD for the month, and that’s likely to continue.

NPD analyst Mat Piscatella noted on Twitter that Paper Mario: The Origami King was the fastest-selling title in Paper Mario history, with physical dollar sales more than doubling what Super Paper Mario did in 2007.

In other NPD news, video game accessory spending is also up this year, at an all-time high of $1.3 billion. Controllers, headsets, and steering wheels all have attained record spending this year. The best-selling accessory of July (and 2020) was the Xbox Elite Series 2 Wireless Controller.

Hardware spending declined in July when compared to this time last year, but year-to-date spending has gone up 22 percent still. The Nintendo Switch remains the top-selling console of 2020 in unit and well as dollar sales.