We’re just a few short months away from this console generation coming to a close. This past year alone we’ve had incredible games to grace our screens like Doom Eternal, Half-Life Alyx, and The Last of Us Part II, a PlayStation exclusive. Sony’s plan to end the generation was not with Ellie’s adventure, but to give the spotlight to a new tale that they wanted to tell.

A tale of a ghost.

Ghost of Tsushima is Sucker Punch’s exploration of the life of the final samurai of the island of Tsushima during the Mongol invasion of 1274 through a vast open-world.

Sucker Punch has crafted, easily, their best game not just in this generation but since they entered the realm of open worlds with Infamous. That being said, Ghost of Tsushima is not perfect and falls into the many trappings of a modern open-world adventure with just a handful of saving graces. But its imperfections do not fully eclipse an interesting, often moving story and some really fun samurai simulation.

Ghost of Tsushima explores the life of Jin Sakai of clan Shimura as they tackle the invasion of the Mongolian empire that is carving a swath of violence and blood across the beautiful island of Tsushima. The game opens with the Mongols making landfall on the island and wiping out the proud samurai who came to fight honorably. The Mongolian invaders? Not so much. The samurai are swept back and killed all save for one, Jin Sakai, the main character of the story. From the get-go, Jin wants to take on the Mongol’s head on but is swiftly defeated and forced to take on a more, dishonorable path. 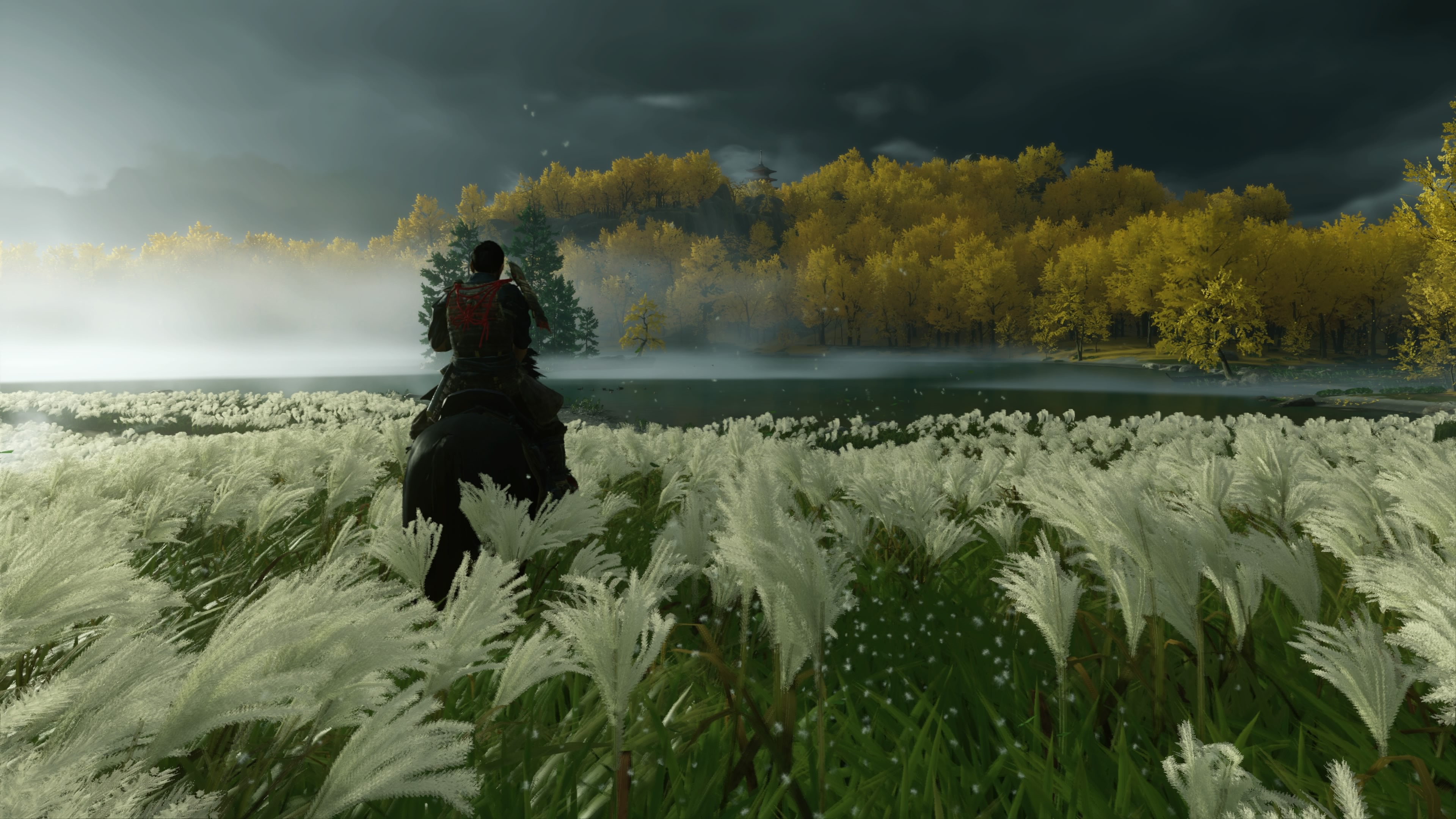 The beginning of Jin’s story.

One of the core pillars of storytelling in Ghost of Tsushima, is honor. Jin Sakai starts to adapt more thief like abilities and tactics which creates a sense of conflict with his more honorable samurai self. While the main-story itself felt a little by-the-numbers, it was this struggle between his samurai and assassin self that I found very compelling. The story is fleshed out believable with a great cast of characters with voice actors who bring them to life in exciting, heart-breaking ways. 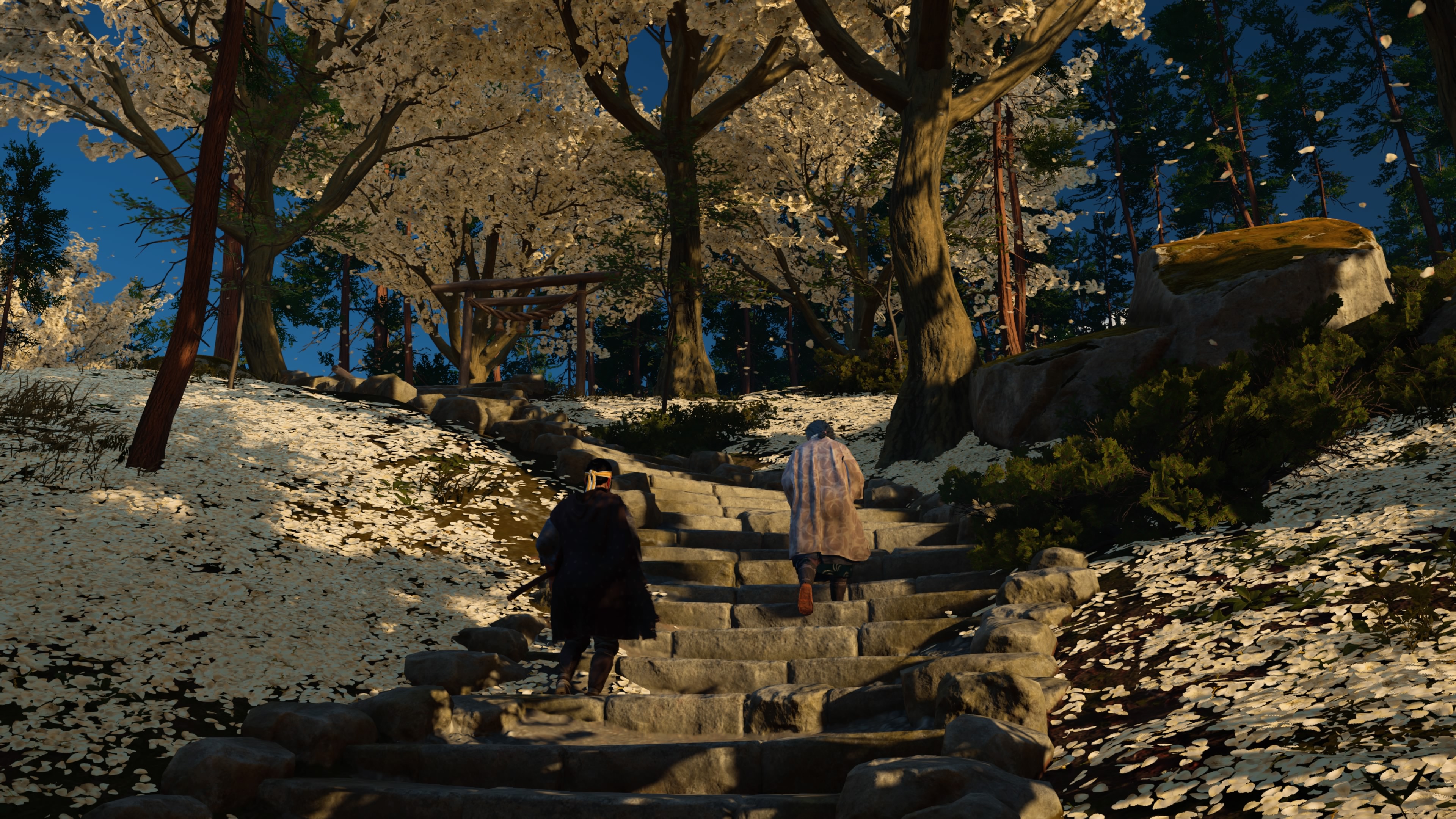 Tsushima’s story can be surprisingly moving at times.

Cutscenes in the game come in two primary forms: more traditional cinematics that is well crafted and scenes that always seem to show characters from a distance, enough for us to not seem them fully animated. Usually in-games this is divided between main-quests and side-quests, but Ghost of Tsushima seems to have both styles running in tandem for their main campaign. This can sometimes be a bit jarring when trying to be immersed in the narrative of the game.

Speaking of immersion, you owe it to yourself to play a bit of the game in Kurosawa mode which makes the game look, sound, and feel like a traditional Kurosawa film (Japanese dialogue is recommended, but the lack of good lipsyncing is very disappointing).

The Way of the Blade

When Sony first showed of Ghost of Tsushima, one of my biggest concerns was that the gameplay looked too easy and simple. After finally getting my hands on it, I can thankfully say that’s not the case and something even more relieving. Jin Sakai’s adventure is not a walk in the park: the Mongol invasion puts you up against tough, skilled opponents that make the gameplay feel tense and exciting. More than anything, it’s the fact that enemies don’t take dozens of sword slashes to take down. Before I started Tsushima, I was playing Assassins Creed Odyssey which is a fantastic game where it takes a while to kill something that’s a higher level than you. It’s nice to then play a game where skill and timing are far more important than XP and levels. 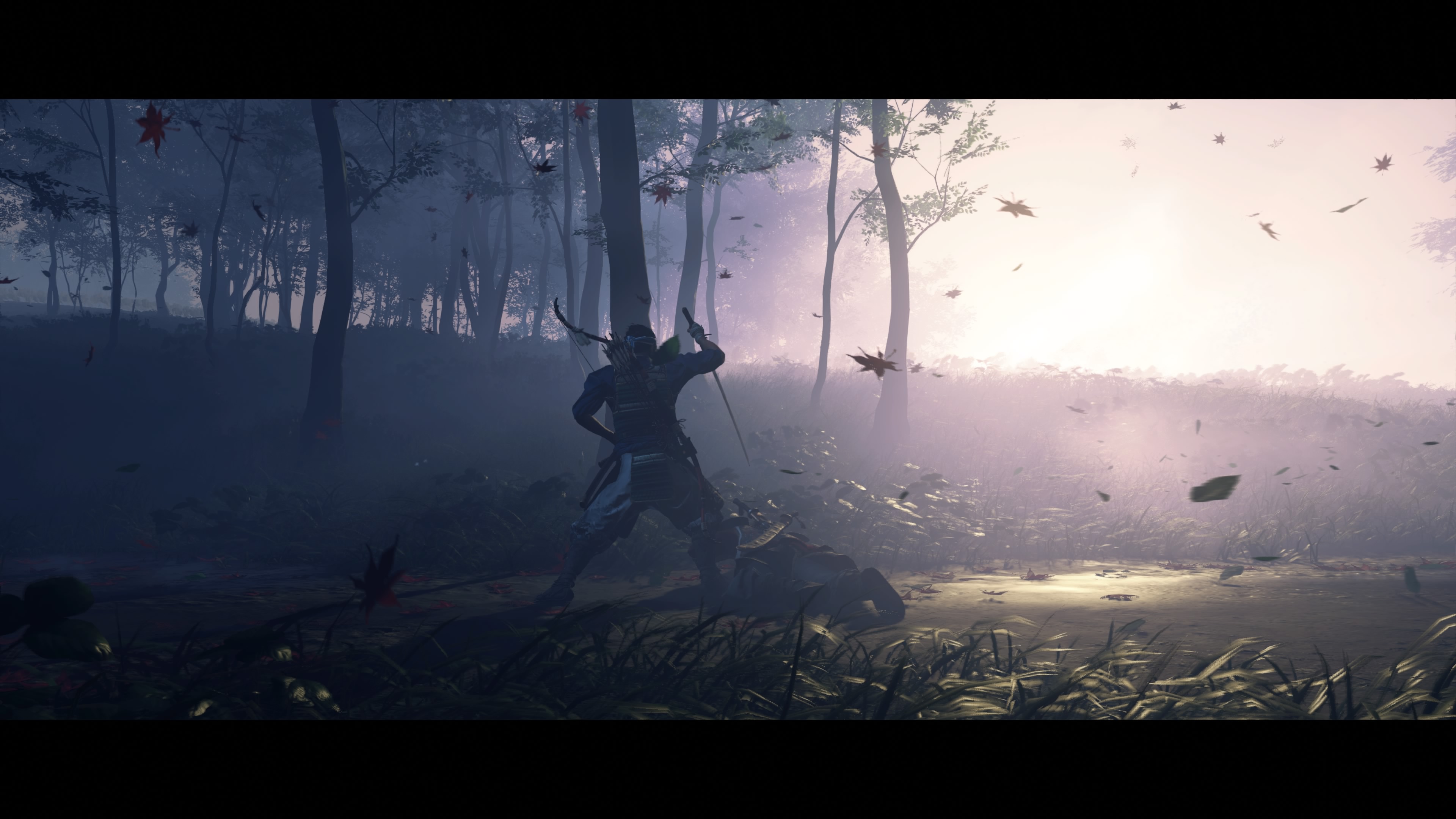 Combat is fierce and brutal.

Tsushima also features a great sword combat system where each thrust, slash, and duel feels intimate and satisfying. Players can switch between various stances that allow you to match the type of enemy you’re fighting. Knowing what’s best for a scenario and knowing when to shift your tactics makes the game feel like a tug-of-war between your enemies in the best way. While the samurai aspect of the game is well fleshed out, it can feel a bit repetitive as the games on: such is the challenge of having one primary weapon throughout the whole game supplemented with a host of somewhat useful ranged weapons and gadgets. 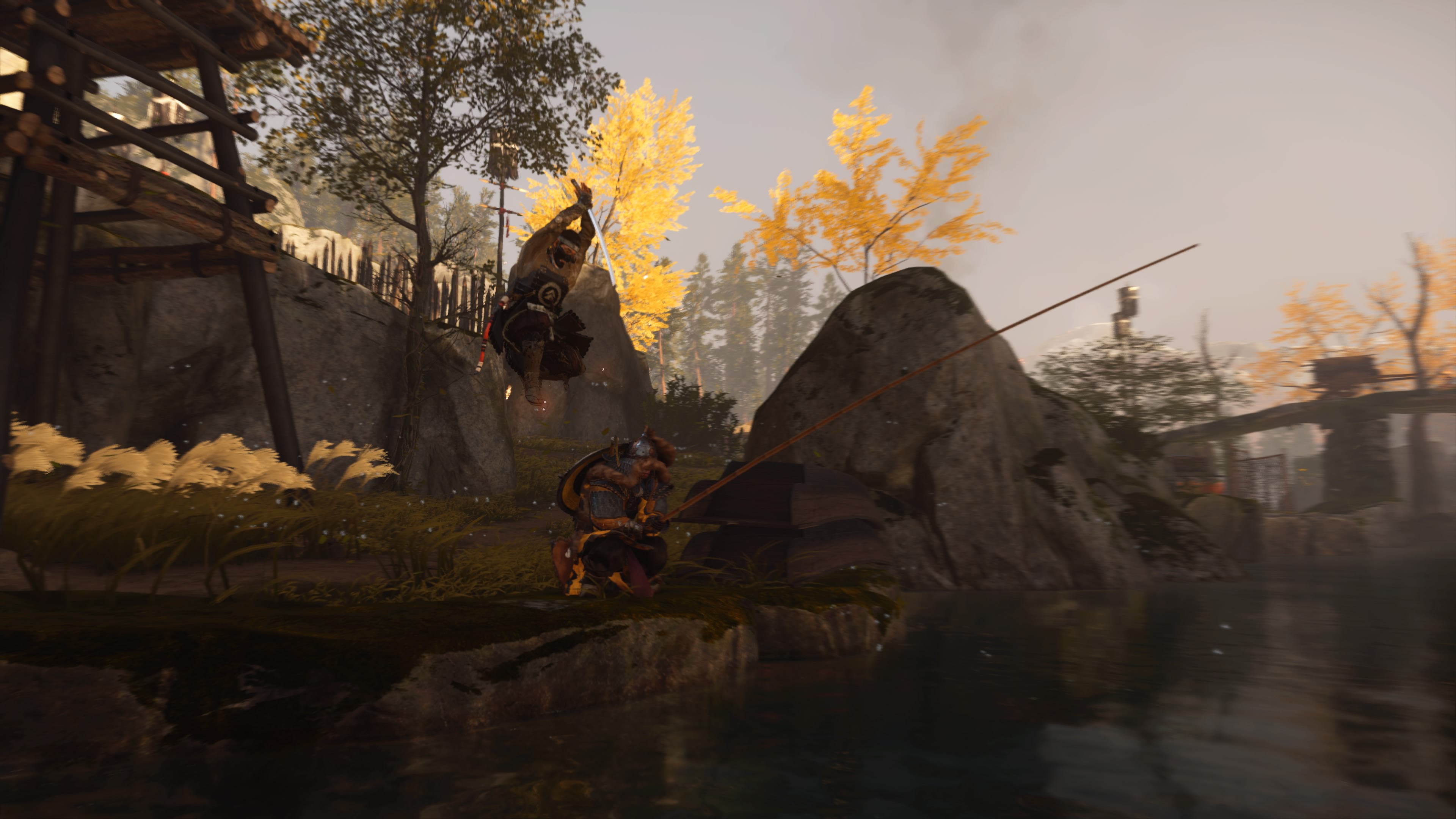 Death from above, classic.

The gadgets come in the form of explosives, smoke bombs, kunai, bows, and more surprises. While they don’t change the gameplay, they do help you with your adventure across the island. One of the most disappointing things about this game is the A.I. and the stealth system that never quite feels empowering enough. Enemy A.I. ranges from okay to abysmal as heavy soldiers feel weak in comparison to a lone, crazed archer. Many scenarios occurred where archers one-shotted me by making impossible, gravity-defying shots: and god…the rate of fire on some of the archers feel inhuman (watch below..I wish I was kidding).

Stealth in the game also feels a bit shallow: run into the grass and suddenly enemies forget your existence. It’s also hard being a samurai or a shadow when the camera flails about when going into tight spaces or grazing a tree. Some of these qualms can be mitigated by an evolving set of skills, upgrades, and armors at your disposal, but for the most part you may have a tough time in becoming the ultimate assassin, or swordsman.

The Isle of Tsushima

The world of Ghost of Tsushima is drop-dead gorgeous. Moving across the world is pleasing to both your eyes and ears as you come across beautiful temples, waterfalls, forests, vast fields and so much more. Sucker Punch has created one of the most artistically beautiful games of this generation, even if the fidelity of the actual world is not always at its best. Water and ground textures can look very flat at times which can be a bit distracting, but not immersion-breaking especially when the wind physics rustling grass and trees look so damn good. 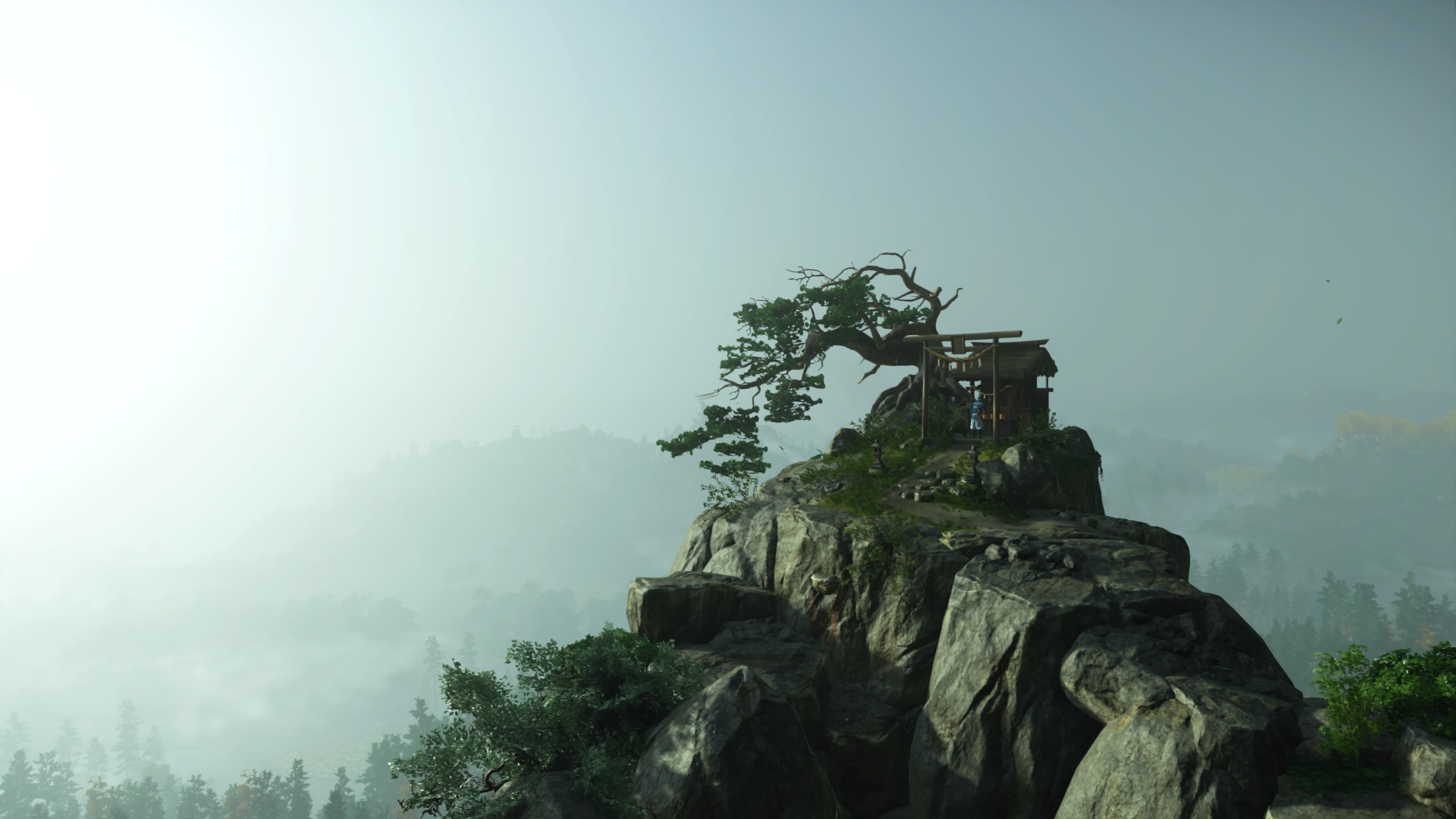 Plenty of places to discover, not all of them worth the journey.

One of the most memorable moments I had in the game was simply taking pictures in a vast field filled with red flowers. I spent maybe 20-minutes just staring at it and riding through it. This is especially fun with what might be the absolute greatest photo-mode I have ever used in my life. Tsushima’s camera mode is filled with incredible choices for users including animating the whole world: this has particularly been very exciting for me. 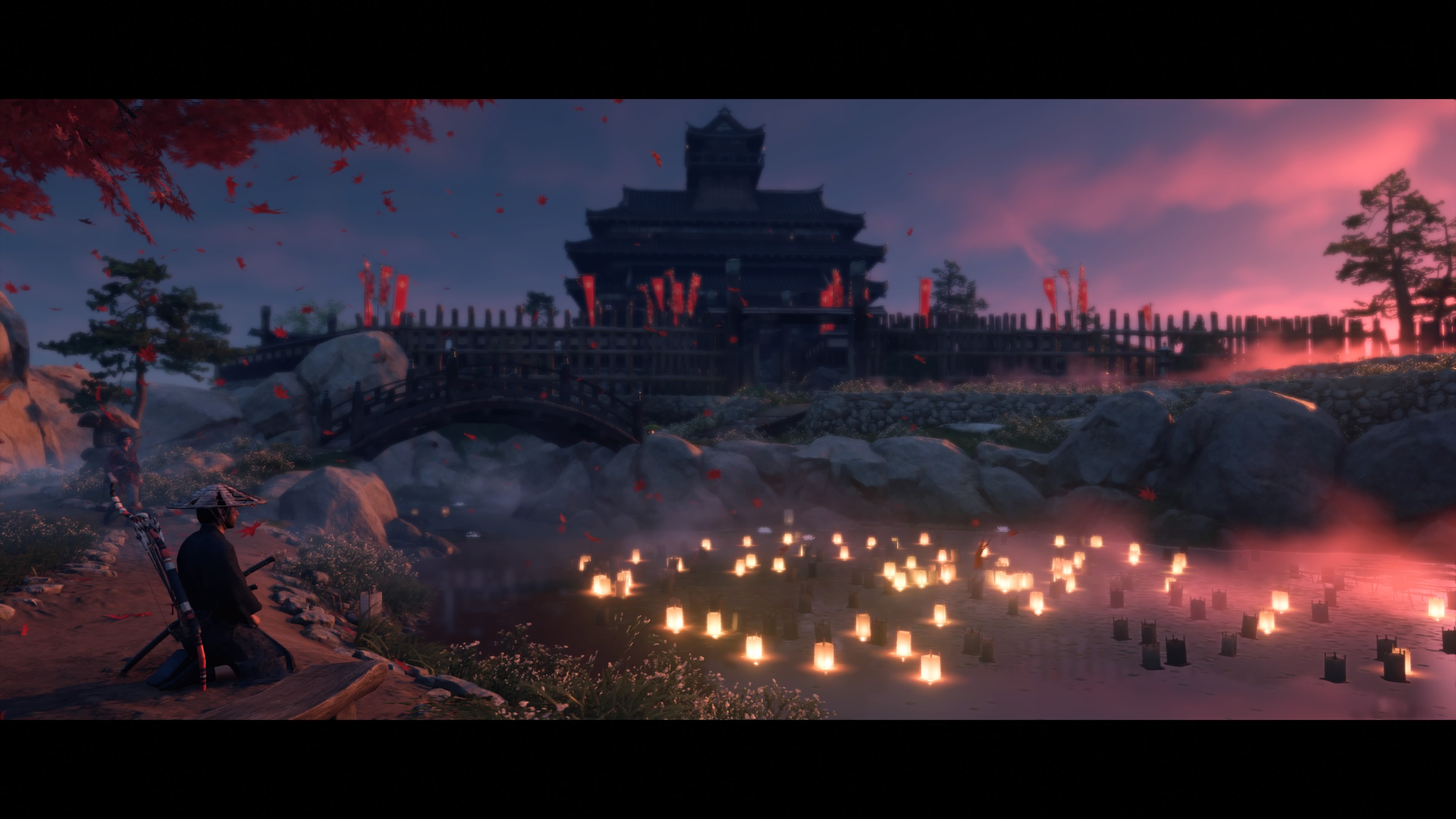 Best photo mode of all time!

Sucker Punch has created a compelling open-world and my most favorite Playstation open-world. I always felt like Horizon: Zero Dawn’s world felt shallow and Spiderman’s world felt too structured. Ghost of Tsushima’s open-world ignores both fo these pitfalls and created a stunning, natural world that feels alive.

Tsushima’s sense of life and naturalism is enhanced with its amazing navigation system: the guiding wind. Instead of big ugly blobs pointing you where to go, just by tapping on the top of the trackpad a pleasing gust of wind guides you to your next destination. Other natural elements like golden birds guide you to points of interest and cute little foxes to unique shrines to pay respects to the gods. Ghost of Tsushima’s greatest strength is its world and how to navigate it, it’s just a shame that it’s side-missions don’t give you too much of a reason to do so. 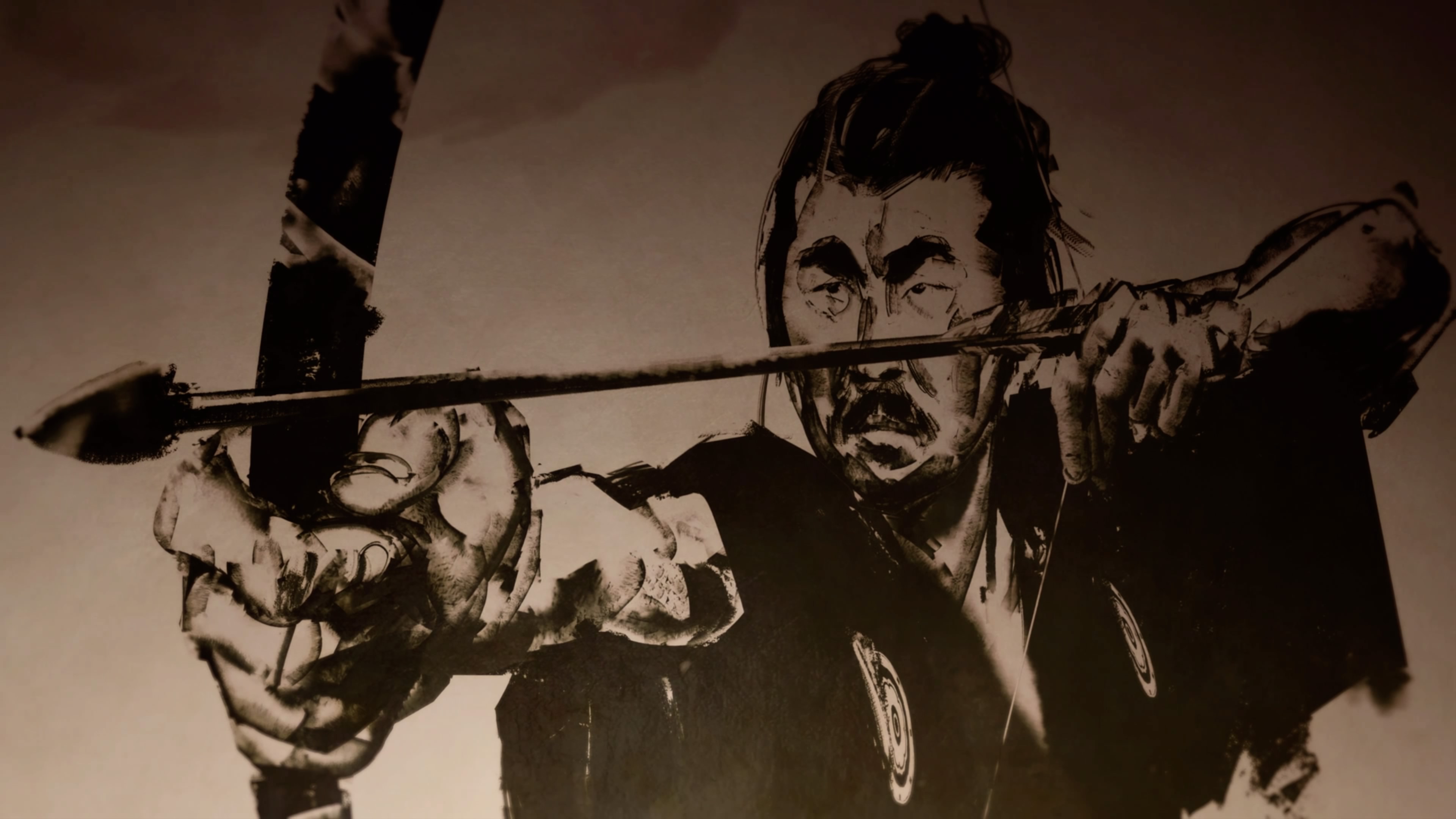 When you’re not fighting to take back the island, you can go off on adventures throughout the island in the form of, you guessed it, side-activities. These missions range in quality from interesting to generic: the best being the legendary tales where you look for unique items that can aid you on your quest. These adventures usually start with a stylistic cutscene that looks like a work-of-art being painted right in front of you. Overall though, your stay on Tsushima might be a short one once you’re done the campaign.

The Ghost of Tsushima 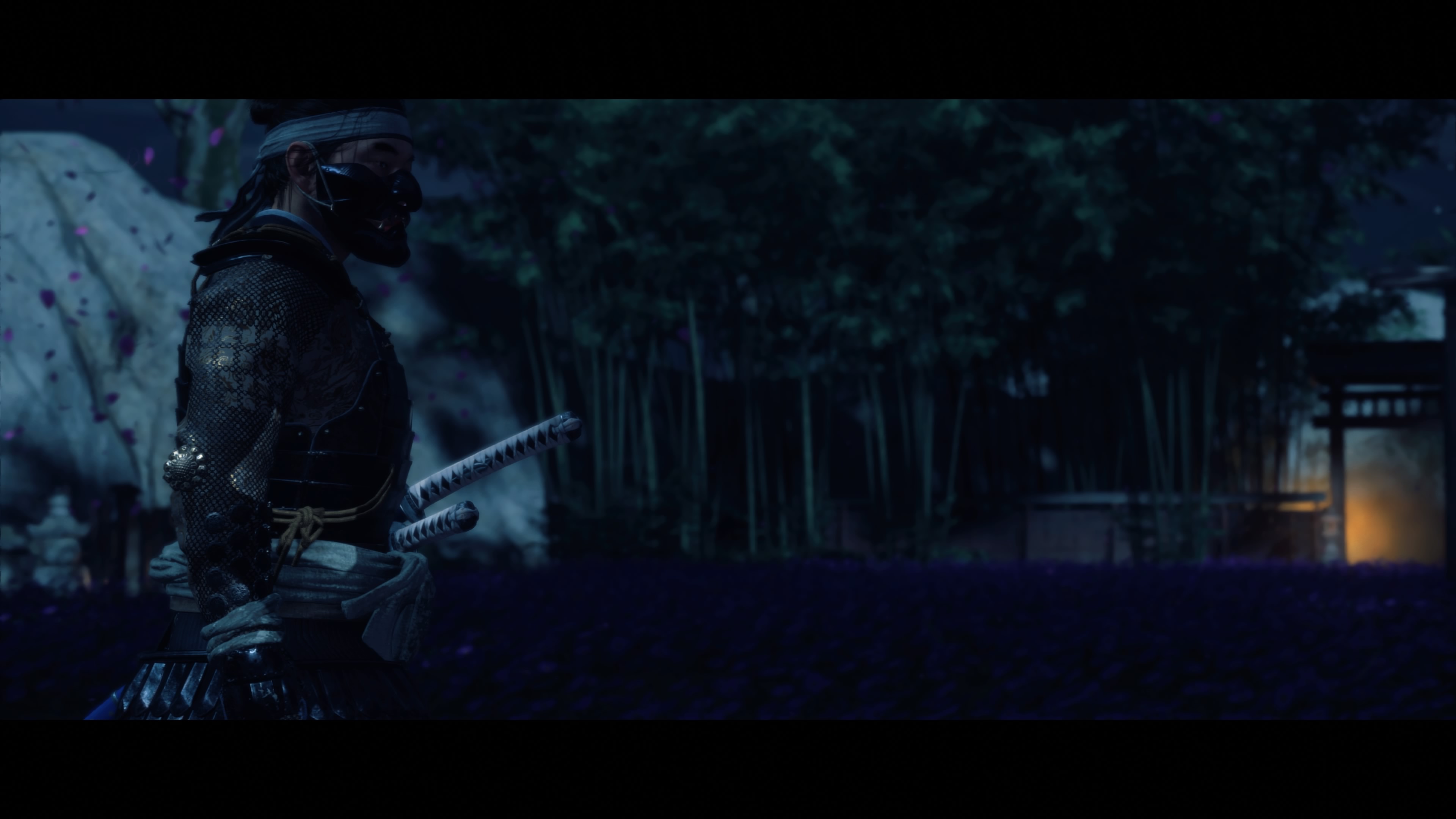 Ghost of Tsushima was an interesting experience and a game Sucker Punch should be very proud of putting into the world. It’s not perfect by any means with poor Japanese lipsyncing, troublesome A.I., a story that falls flat in some regards but none of this will take away from an exciting adventure filled with some fun things to do in a stunning world waiting to be explored. Once Sucker Punch overcomes some growing pains in fleshing out their world, they have a special recipe to make something truly exciting in the future.