During my first playthrough of Resident Evil 3, the decent balance between horror and action had me wanting more. As Jill attempts to evade the warpath of the Umbrella superweapon Nemesis and Carlos tries to save as many people as possible. Then the credits rolled and the campaign was over with little reason to keep playing. The multiplayer mode was mediocre but oversaturated with network issues. Resident Evil 3 is a decent survival-horror title that stumbles due to the lack of content compared to the previous game. 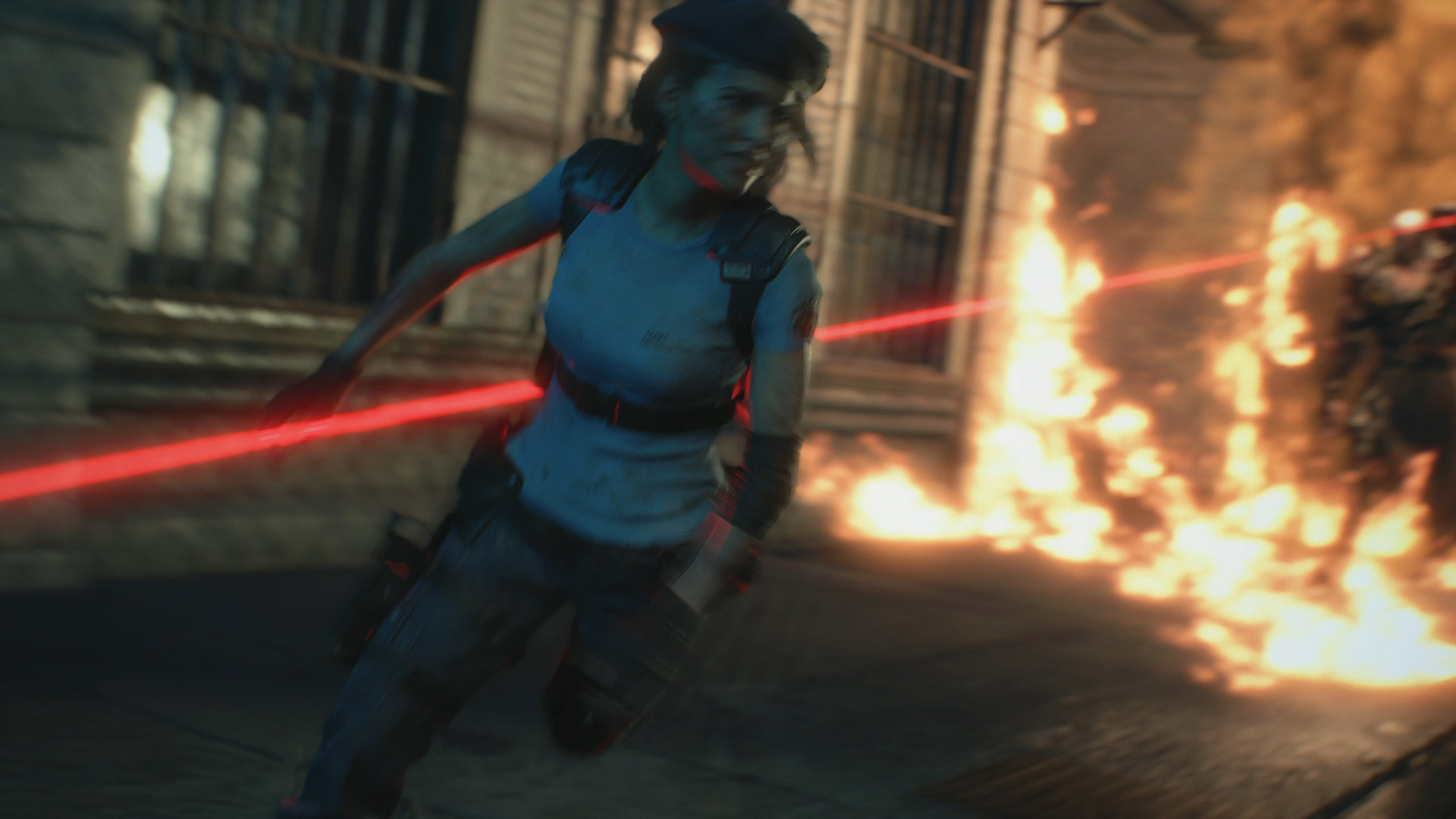 Taking place during the events of Resident Evil 2, S.T.A.R.S. agent Jill Valentine is in her apartment preparing to leave Raccoon City while also working on taking Umbrella down. Since the events of the first game, Jill has been having nightmares and researching Umbrella’s insidious activities. To the point that people are watching her and Jill believes, with good reason, her life is in danger.

Unknowing to Jill Raccoon City has been infected with the T-Virus and Nemesis has been released. Jill’s partner Brad attempt to warn her but is cut short when the beast breaks into Jill’s apartment and she is forced to flee. Beginning a long nightmarish chase through the streets of the now quarantined Raccoon City.

The story does not rewrite the lore of Resident Evil. All the events that transpired in the original still happen in a different way. With Jill evading Nemesis while helping civilians escape the city. Iconic moments play out here but most are left out or altered. For example, the Clock Tower and Park have been removed. Along with the choice system that allowed for multiple ways to complete story objectives.

The narrative is satisfying for a Resident Evil title. Don’t expect anything shocking and even those who haven’t played the original can predict what will happen. However, the appeal of the franchise always came from the tension of surviving the infected. 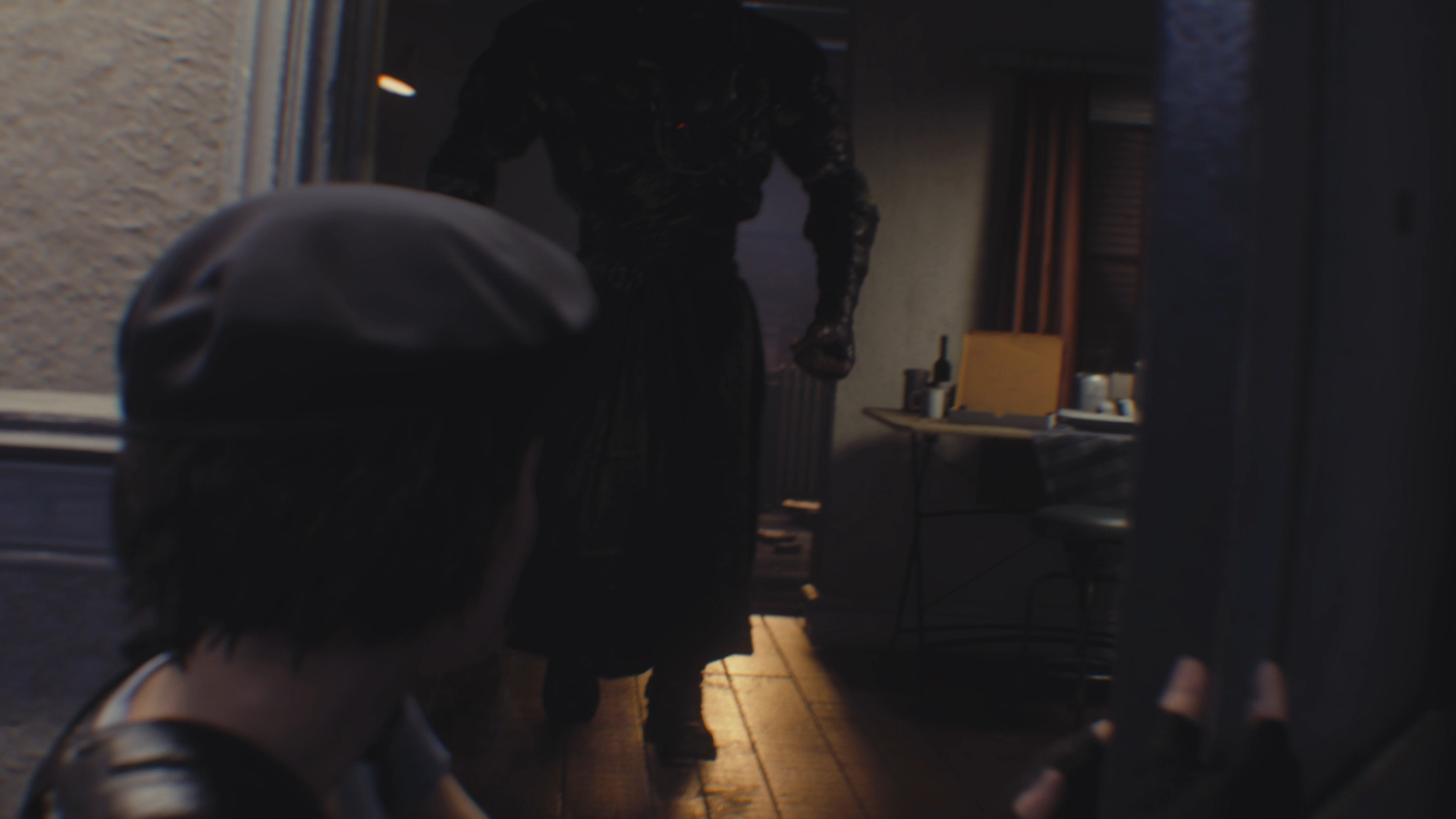 Like 2019’s remake much of the same mechanics are still here. With new additions such as the dodge feature, the ability to pick up items quicker, and the unbreakable knife. Which in turn means that Jill cannot use the knife or grenades to defend herself against the infected when grabbed.

Items are still easy to locate thanks to the improved map introduced in the previous game and the enemy diversity is still plentiful. With new takes on existing enemies such as the Hunter Gamma. With damage still being largely inconsistent but adding to the tension and encouraging the use of dodging and evading over direct conflict.

The biggest obstacle is Nemesis. Unlike the original game, Nemesis is now limited to scripted events. The monster will not appeal outside of these events but during these sections will actively chase Jill without mercy. Charging, punching, leaping to cut Jill off, and even dragging her back. That being said, Nemesis is still deadly and frightening but is limited compared to his original debut. Where he could appear randomly at any time. If you do happen to stun the behemoth you do get some special items but doing this requires a lot of resources and confidence.

The idea of conserving items using the mystical item box and rating the player based on completion time and times saved is still here. With points rewarded for completing objectives that can be used for new items, infinite ammo weapons, and more. Auto saves also provide some safety nets if players need them but are removed on harder difficulties.

While Jill serves as the survival-horror aspect of RE3 you later gain control of U.B.C.S. soldier Carlos Oliveira. During these specific missions, Carlos’ missions are treated as action segments. Armed with an assault rifle and dozens of enemies to kill. It helps distinguish both character’s styles for handling things.

To break up the action and horror small puzzles are available. Most are collect the key item or reach what’s on the screen. It’s nothing major and the puzzles are very basic.

What brings Resident Evil 3 down is the replayability. Unlike the 2019 title, this game has only 1 campaign. In comparison, RE2 2019 has 2 core campaigns that can be played as either Leon or Claire and the 4th survivor mission at launch. RE3 has 1 campaign that can be completed in about 3 hours. In fact, I completed the game in 3 hours on my first playthrough and 1 hour 30 mins in every new playthrough. There are collectables, concept art, models, and challenges to complete but this will likely only entice trophy/achievement hunters or hardcore fans who want to get everything.

To supplement the package is a multiplayer mode called Resident Evil Resistance. Which isn’t that great. 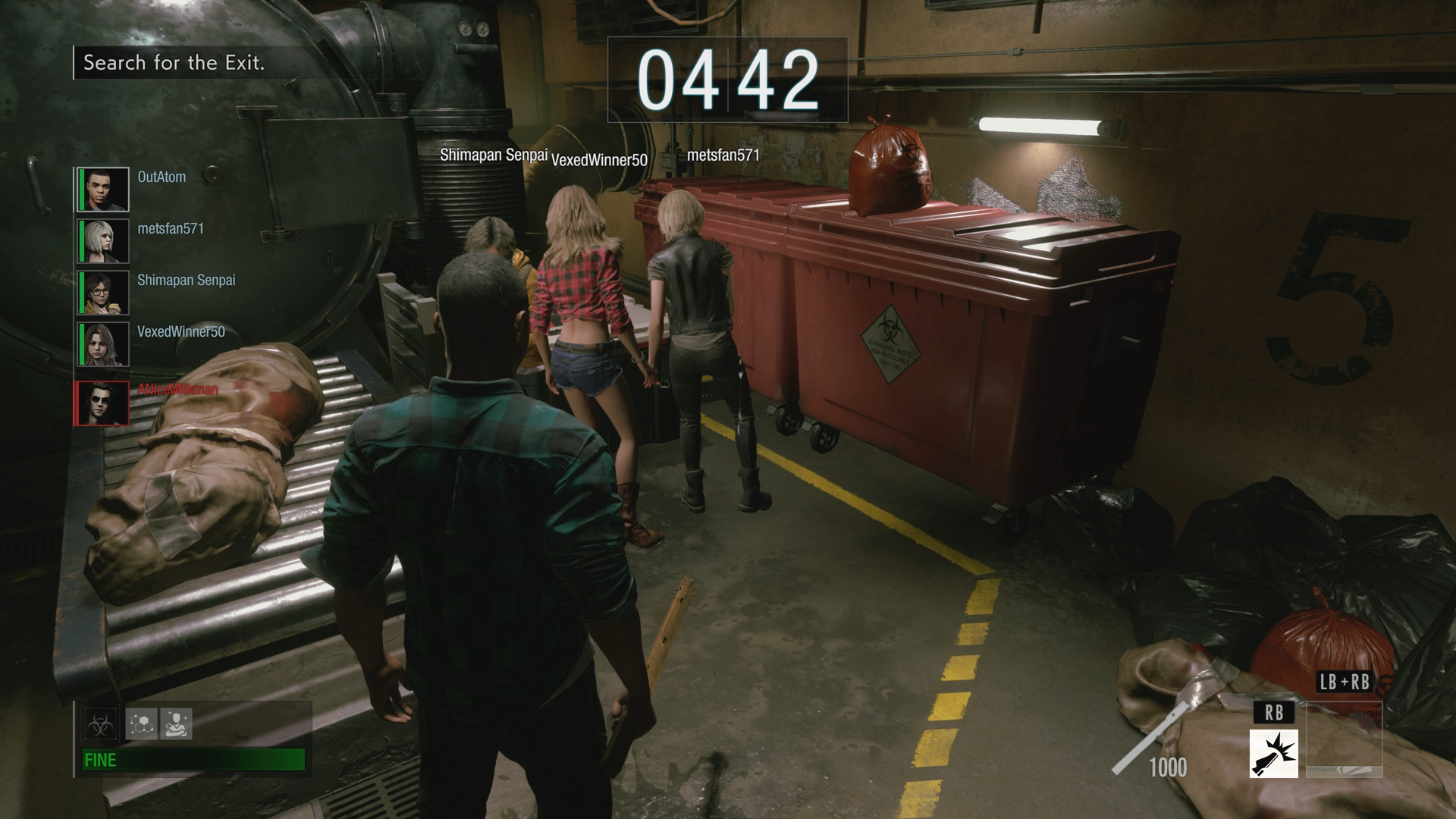 Resident Evil multiplayer doesn’t have the best track record. Resident Evil Resistance is a decent multiplayer offering. With a 4v1 competitive option where 1 Mastermind tries to stop 4 survivors from escaping a facility.

The Mastermind watches the map through cameras, placing traps and infected on the field. While the survivors attempt to complete objectives and reach the end of each section of the map, usually 3. As the match progresses the Mastermind and Survivors gain access to more powerful items. With the Mastermind getting better cards that summon more powerful infected while the Survivors can purchase better items with collected Umbrella Credits.

There are 4 Masterminds and 6 Survivors to choose from. Each one has specific talents and strengths. With Survivors needing to work together maximize their talents and items while the Mastermind does their best to separate and kill allies. There’s a time limit on everything and the more damage the Mastermind causes the quicker the timer decreases while Survivors gain more time for killing infected and completing objectives.

There’s plenty of cosmetics and upgrades to unlock. With players able to purchase upgrades and cosmetics using real-world money. The cosmetic chest is very expensive and can take a lot of time to earn enough for 1 random item. Players with higher levels also have a bigger advantage against newcomers who can get steamrolled by enemy players who have a lot of powerful equipment or skills. Which are level gated as well.

Most significantly is that most Resident Evil players play this franchise for the single-player. This mode was obviously bundled to supplement the light campaign offering and it shows. I would’ve rather wish for more campaign content over this entire multiplayer mode. 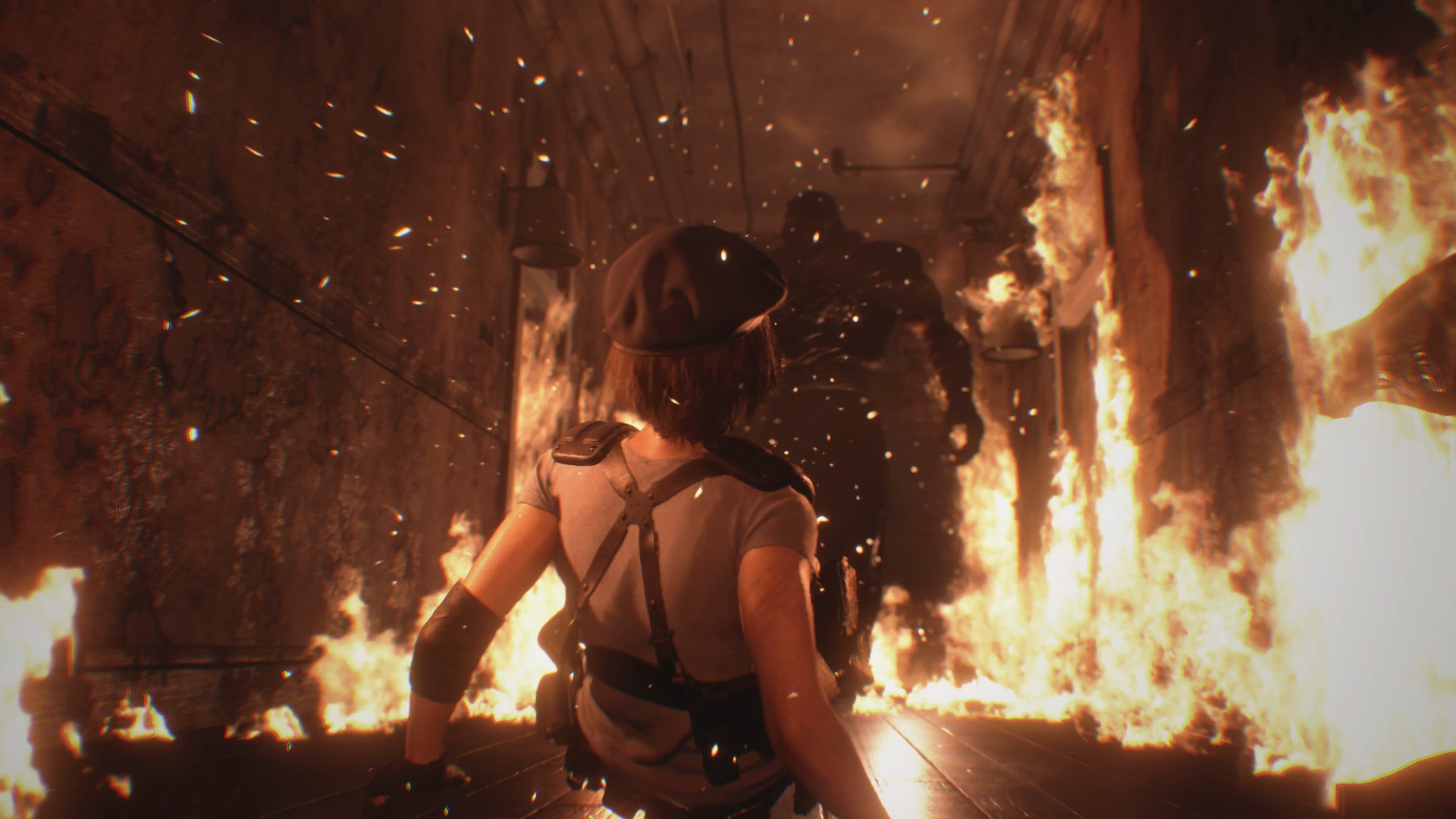 Resident Evil 3 2020 is a decent survival-horror game. The game’s great boss fights and lots of tension-filled moments, especially when Nemesis is on the hunt provides the thrill fans of this franchise love. The multiplayer is a decent distraction but more single-player would’ve been better received. Especially considering 2019’s offering.  Resident Evil 3 has a lot of highs but I wished the adventure lasted longer.