If you love first-person shooters, PC-gaming or just heavy metal music in general, there’s a good chance you’ve crossed path with the Doom series. Our loveable demon slayer first debuted in 1993 in all its gory, demonic glory paving the way for a genre that owes its life to grandpa Doom Guy. In 2016, id Software returned to the series with a complete facelift that took Doom Guy out of retirement, gave him a complete makeover and introduced us to the Doom Slayer.

Doom (2016) became an absolute hit taking what made the classics so captivating and injecting it with adrenaline, heavy metal, and more glory kills than you could shake a chainsaw at. Four years later, id Software has released the follow up to an already amazing game and somehow managed to not only surpass its predecessor but evolve it beyond what I could have imagined.

Doom Eternal is here, and it may just be one of the greatest first-person shooters I have ever experienced in my life.

The Only Thing They Fear, Is You

A direct sequel to Doom (2016), the sequel takes the same approach with its no-nonsense storyline and cranks the presentation and lore all the way up. The Doom series is not going to win any awards for its storytelling: end of the day, it’s a straight forward story of revenge, heaven, hell, and mankind being stuck in the thick of it. Expecting a cinematic masterpiece from Doom Eternal will only let you down, instead, the best way to approach the game is to just submerge yourself into the absolute insanity of a fantastic campaign. The dialogue and storytelling have had a much-needed transformation with some great cinematics and dialogue. If you want to jump straight into the violence, id has provided a handy skip button (something many games desperately need).

Speaking of dialogue, some of it ranges from overtly serious to absolutely hilarious. Doom Eternal often feels very self-aware, knowing well that it is an absolutely ridiculous storyline with dialogue like “The only thing they fear, is you”. If you think about it hard, the line is a bit corny but I still can’t help watching the launch trailer over and over again just to hear the line. id Software has created a game where context is king: and the context of this game is that you are an unstoppable force of nature which gives credence to such a line.

Playing the game makes you feel like the Doom Slayer as demons literally look at you in fear as you perform a brutal glory kill. The developer has created a great power fantasy with its storytelling, putting you at the center of a hellish invasion.

It’s a good thing your arsenal has had a serious upgrade.

Doom (2016) was a visceral, fast-paced experience that left you catching your breathe at the end of a fight, making you think “How the hell did I survive that?”. Somehow, Doom Eternal has made its predecessor feel slow and mundane. id Software has taken the core gameplay of its predecessor and added a host of new weapons, upgraded favorites and new tools of destruction that would make even the Doom Slayer smile.

With an arsenal of shotguns, heavy cannons, ballista, the super shotgun (now with Just Cause like grapple) etc, you constantly feel rewarded for waging war. While the guns in Doom (2016) were fantastic, Doom Eternal has added far more emphasis to the function of each weapon giving every modification and bullet a purpose. Against a Cacademon, conventional weapons work but if you fire the grenade mod on your shotgun in its mouth, the creature will become stunned allowing you to finish it off with a glory kill. Every enemy has it’s Achilles heel, and it’s up to you to exploit them all.

Running out of ammo? No problem! Doom Eternal introduces a series of abilities that make combat frantic and satisfying. Doom Eternal arms the slayer with a flamethrower (the lovely flame gulch), grenade launcher, ice bomb and a giant predator-like blade on your arms.

These abilities are just not for show though, each has a unique function: ice-bombs freeze enemies in place and give you health when killed, the flame gulch makes enemies spew out armor as they burn and the chainsaw replenish your ammo reserves. New abilities like this add a layer of resource management that makes the hunt against demons feel more pressing than its predecessor.

Enemies in Doom Eternal are brutal, relentless and come in a variety of forms for you to rip and tear through. A.I. can be dodgy at moments when battles become really intense, but overall the enemies will give you a hard time. The game comes with various difficulty levels, but the best experience is anything on Nightmare or harder. During my run through on Nightmare, I felt myself getting frustrated but it was never at the game itself: it pushed me to want to get back into a fight over and over again till I overcame the hellish obstacles thrown at me… unless it’s a marauder. I hate marauders (but also find them fun to fight for some sadistic reason). Luckily you can dodge them easily with the dash ability that adds another layer of movement.

The game also features a healthy amount of platforming, which is usually hit or miss in first-person shooters. But in the case of Doom Eternal, it’s enjoyable and never gets in the way of facing your enemies. Adding to the already growing roster of abilities, are various upgrades including runes, sentinel tokens and more which enhance your abilities, health, ammo capacity, the range which you can do a takedown, slowing downtime as you’re in mid-air and a whole list of other cool things.

Between killing everything that moves, Doom Eternal also has a wealth of secrets, collectibles and things to discover to keep you busy throughout. For myself, I’ve never been big on collectibles in games but I can see myself doing another playthrough of the game just to get the last bit of toys to display in my room in Castle Doom, the fantastic floating Sentinel space station hovering over Earth. Exploring Castle Doom is a welcome break from the insanity of the campaign, giving you some time to explore the Slayer’s home and slowly unlock new rooms using sentinel batteries. These rooms contain upgrades, secrets and even skins for your character including a very cool gladiator looking one, and the original DOOM look from 1993.

Doom Eternal is a complex tango of resource management, speed and reflexes, strategic thinking and plain old adrenaline that will reward you in ways shooters haven’t in a long time.

The landscapes are beautiful.

Let me be straight with you, Doom Eternal is a gorgeous game. Now, playing on a 1080ti PC with an ultra-wide monitor makes anything beautiful, but Doom Eternal really is a beautiful aesthetic romp. Unlike Doom (2016)’s almost binary level design, Doom Eternal adds sweeping mountains, ancient cities, burning landscapes and beautiful gothic architecture. Every level I arrive at I have to take a second to look around and appreciate the wonderful level design that’s been done by the team, both visually and in terms of design. All of these wonderful levels are rendered with the id Tech 7 engine which brings these landscapes to life with impeccable detail.

Doom Eternal has also been optimized near perfection: it takes me seconds to get into my game and I don’t even have it installed on an SSD, the game is locked at 60 frames at the highest settings and I have seen maybe 2-3 bugs during my entire playthrough. Even on consoles, Doom Eternal is a locked 60 frames experience much like Doom (2016) putting emphasis on speed beyond just its gameplay, but in the way, it was crafted and optimized as well.

Not only does the game look great, but it also sounds amazing. Every crunch of bone, flesh torn is rendered with intricate, concerning detail (their foley team needs a huge bonus). Weapons have a noticeable punch when firing, and every reload animation is crisp and beautifully mixed. The environments sound lively with expertly handled foley throughout. But the real star of the audio department is the music. Yes, that’s right, this section is a Mick Gordon appreciation section.

I have no words for the music in Doom Eternal, it’s perfect. Mick Gordon is the mad genius behind many Bethesda Games soundtracks including the Wolfenstein series, Prey (2017) and Doom (2016). Doom Eternal’s soundtrack is a heavy metal infused symphony that combines bullets and ballads into something truly beautiful (and intense.) Every song in the game could be comparable to the boss music in any other game.

You feel the intensity of the music burning a fire in your soul as you rip through enemies and attempt death-defying feats: it’s the perfect soundtrack for a game like this. There’s even a fantastic behind the scenes video of the music, showcasing dozens of local rock talent that formed a rock orchestra. It’s worth the watch.

When you’re done wiping the floors with hell’s champions, there’s a multiplayer mode that you can dive right into: battlemode! Battlemode is an asymmetrical multiplayer mode that pits two player-controlled demons against a player-controlled Doom Slayer. I initially had no interest in the mode and even considering omitting it from the interview, but dear god, it is a lot of fun (and maybe a little anxiety-inducing).

Imagine a round of Rainbow Six: Siege except that you’re not infiltrating a location, but getting chased by the Doom Slayer (or vice-versa) in a relentless gauntlet. While I haven’t put too much time into the multiplayer mode, it’s clear that id Software wanted to break the mold from a standard deathmatch mode and try something new. I know for sure that I’ll be jumping back in again to hunt my friends down as the Doom Slayer. 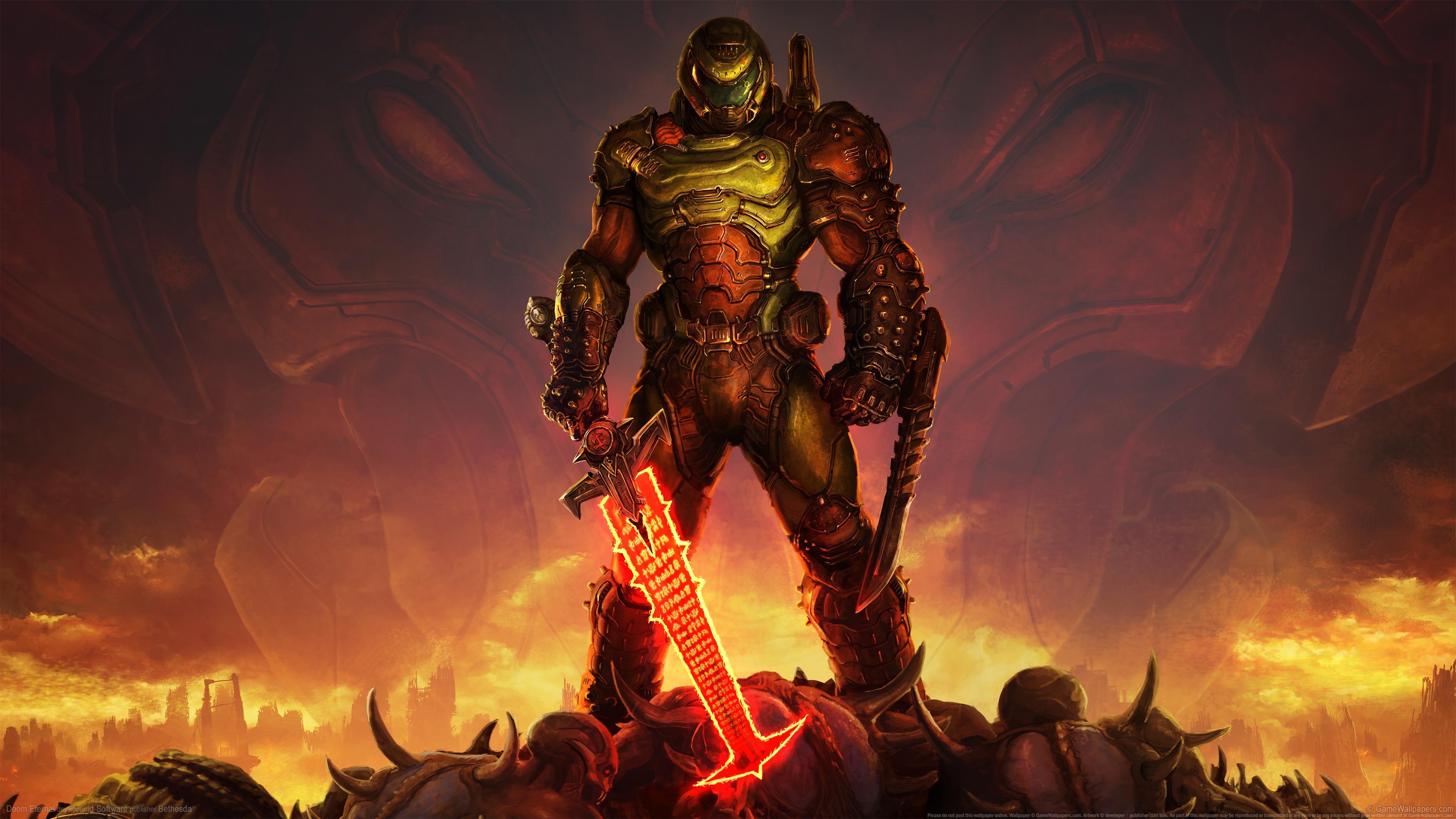 Doom Eternal is the perfect sequel to an already amazing game. id Software has taken much of what makes the core mechanics so compelling and evolved into a game that is beyond any shooter in the past few years. It is easily the best first-person shooter in years, and I can’t even imagine how they could top this in the future.

The developers have taken many risks by changing a bit of the tone and the aesthetics compared to the first game, but I believe that they’ve been rewarded by a game that will be talked about when Game of the Year nominations roll along.