Bleeding Edge is a melee heavy multiplayer game from the developers of Hellblade: Senua’s Sacrifice. Ninja Theory’s newest game is very reliant on teamwork and running off alone is an easy way to get punished by the enemy team. It features a solid cast of standout characters that each have a distinct personality and abilities. They all got together to test out illegal mods and formed an underground fighting club just for blood and giggles. Is there more to the game though, or is it a shallow scuffle in the grand scheme of gaming? 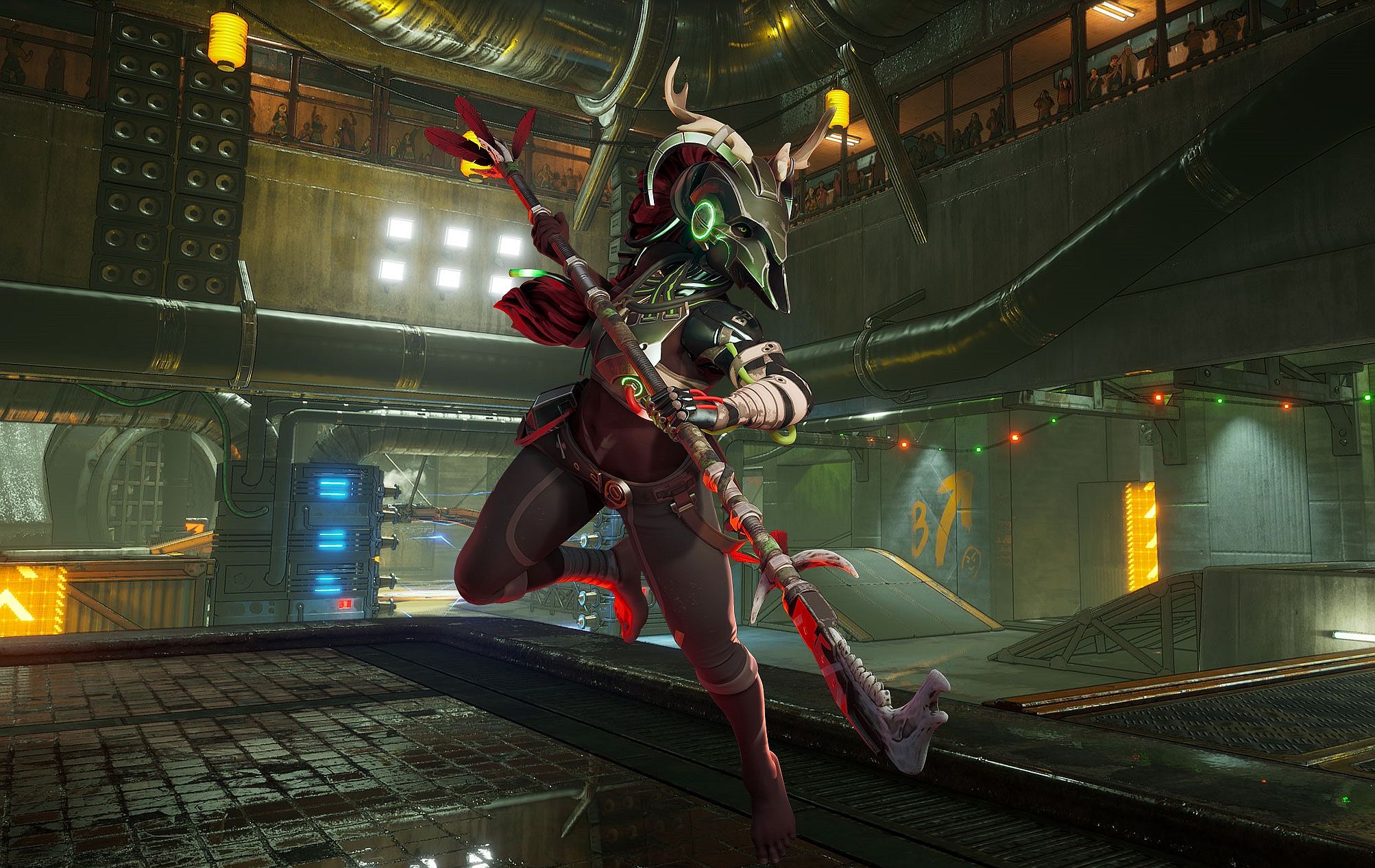 As stated earlier Bleeding Edge is primarily melee focused. Each character has a standard attack as well as two other attacks that have a cooldown. As an example, Daemon has the ability to go invisible, dash forward and throw shurikens that will slow his enemies. Ultimates can be switched to fit your play style, Daemon has one that allows him to slash enemies for higher damage depending on their max health or he can do more damage to a marked target and that will extend the ult.

Another key aspect of the way Bleeding Edge’s combat works is refurbishing a character’s stats with in-game mods. They will buff one aspect, such as damage, while nerfing another, such as ability cooldown time. The way you stack and alter these mods has a huge effect on how well you will be able to compete during the match. 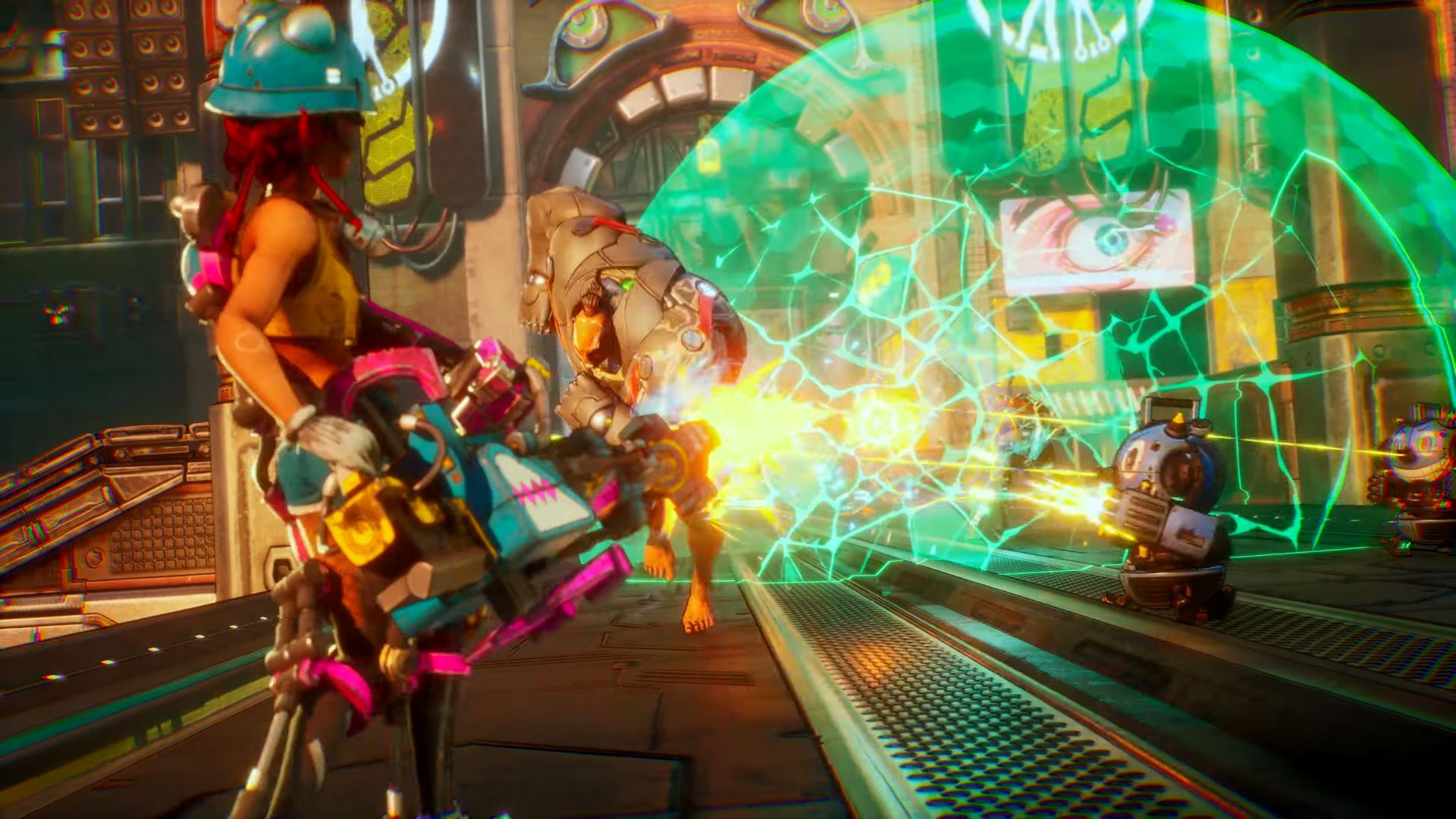 So the two modes established in the game are ones that involve capturing points that are dynamic on the map, shutting down periodically. The other game mode has players trying to collect canisters, players then have to deliver them to certain points when they open on the map. Kill other players and taking theirs is also a key aspect of that game mode. Throughout both available modes, players must move together as a team and communicate.

That, unfortunately, can be easier said than done. One of the reasons I struggled so much with Bleeding Edge was the fact that I don’t want to HAVE to talk to other players. I love playing games with friends, which I don’t get to do often, so I really only want to shoot the breeze and interact with that person or group while gaming. Having to talk to several other people to try to coordinate them and avoid being singled out, wears the experience down.

It is much more than that. As someone who frequently plays games alone, I prefer to mute the in-game chat, as well as turn off in-game text chat. As a streamer, it also cuts down on chatter that doesn’t fit the tone of my community. It boils down to this, I got to play five games of Bleeding Edge and only enjoyed one of them. I spent the rest of the time trying to get the group to focus a point or trapped in a corner getting the hell kicked out of me. 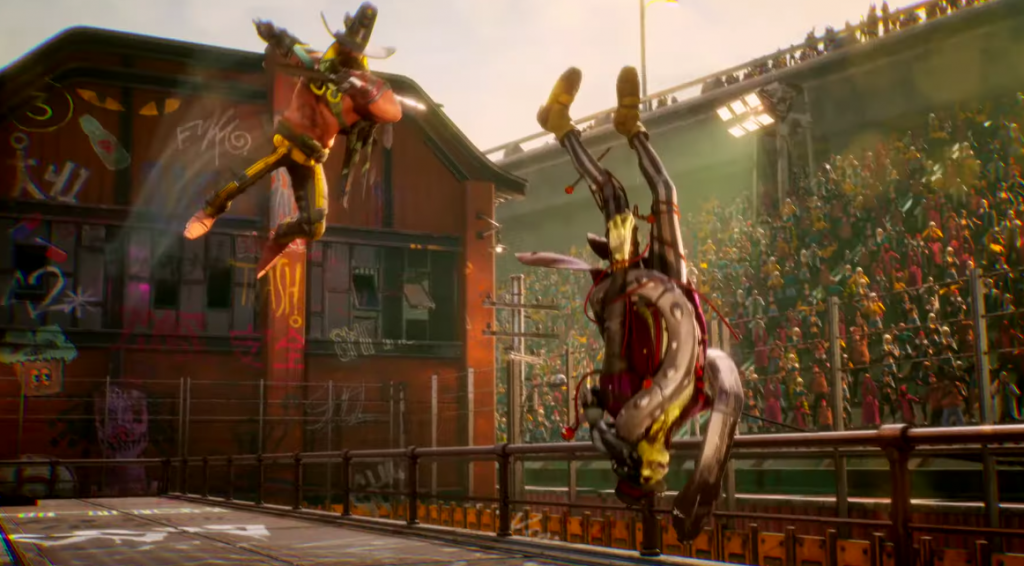 The characters in Bleeding Edge are wonderfully crafted and have huge personalities. Gizmo grew up spending time with her father, building fighting robots. Later she started with self augmentation and grew into the competitor we know and love with her Gatling gun and destructive mech.

Mekko is a precious little dolphin that wants to wreak havoc on humans because they trapped Mekko and experimented on him. They stole his life and innocence and now he wants blood. He feels like the Bleeding Edge crew is his only family, but he still takes solace in taking their lives. That’s metal as hell, and speaking of metal.

Nidhoggr once a classical music master, now a Black Metal Icon in his time, he uses his guitar to decimate his enemies and push his “anti-authoritarian motives”. Check out the bios section on Bleeding Edge’s website for even more info on the wonderful class of characters. 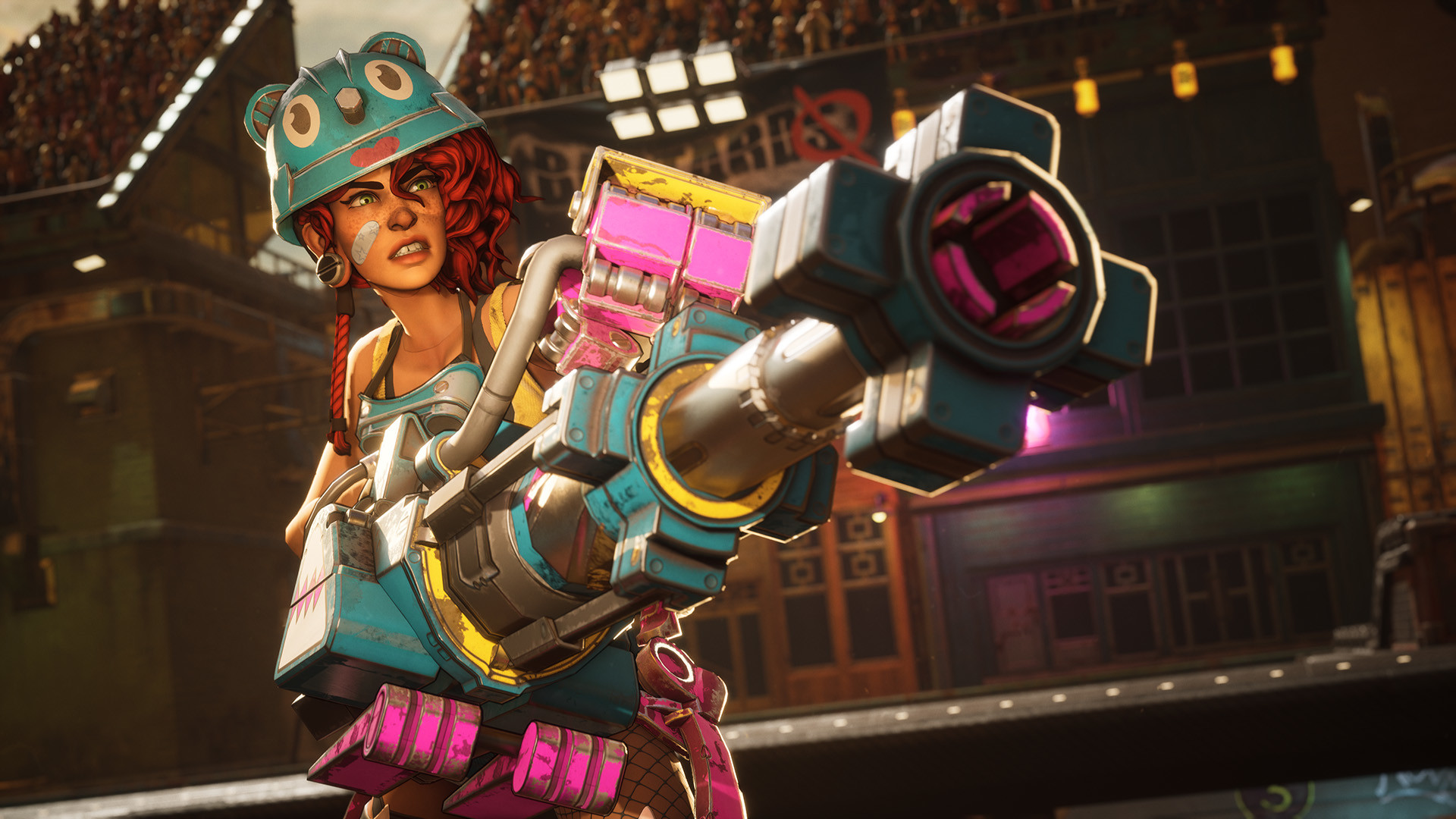 El Bastardo is a character that made my time with Bleeding Edge a living nightmare. Every single time I came across this character they never missed a hit and they always seemed to stun me with every swipe. I would be minding my own business trying to get to the objective and then bam the dickhead in the sombrero is back. I can’t dodge or move out of the way he just slashes over and over in an endless loop. If he didn’t outright murder me and desecrate my corpse his team would join in for an easy beat down that was game ruining. At times I couldn’t even get back to the objective for entire matches.

He was this level of agitating during the beta of the game and I am surprised he wasn’t dealt with in some manner before the full release of Bleeding Edge. There is a trend in multiplayer games where they all feel rather stun heavy. Siege has literally stun grenades, half of Overwatch’s cast can leave you immobile in one way or another, and now Bleeding Edge has El Bastardo and his particular brand of BS that leaves players unable to fight back or evade.

As soon as you are hit you may as well just accept death. Even as a tank character there were times where I could not deal enough damage or push him back at all. If I were playing Gizmo or Daemon, both of which are damage characters. I could never deal enough to kill him. 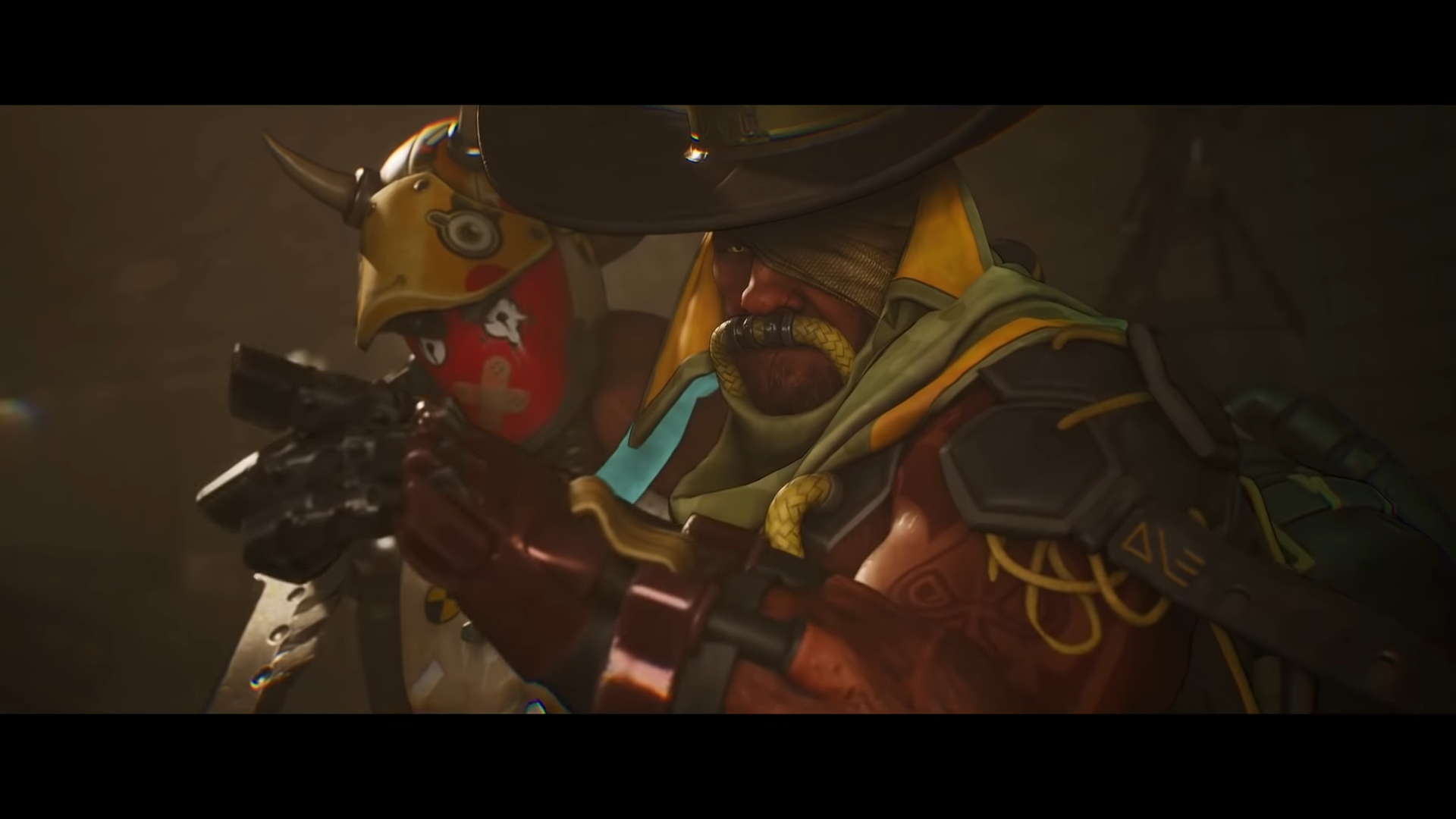 As far as content goes Bleeding Edge is a little bit of a lightweight. It has less than a handful of modes available, only a few maps and entertaining characters/cosmetics can only get a game so far. I worry about the future and longevity of the game. With only two modes and just five maps, how far can that really stretch before players abandon it? I really hope the developers are able to produce enough content down the road for the fans that really enjoy the game.

Bleeding Edge has the potential to be this generation’s Unreal Tournament. I may personally not like it as someone who prefers to be alone, but I see the potential and why others love it. In fact, a lot of my problems could be solved with the addition of a simple ping system much like Apex Legends has. Speaking from a technical standpoint the game has a lot going for it, and, yes, it can be fun if you enjoy playing with random people or have enough friends to fill out a team.

I just didn’t have that and that made my experience a rather miserable one. With everyone stuck at home, I encourage them to try the game out. It is currently on Xbox Game’s Pass so you can try it that way before you decide on buying it.