Games like NHL Hitz and NBA Jam are fondly remembered by many.

They were licensed sports games, sure, but they didn’t prioritize realism or authenticity, focusing instead on fast-paced, arcade-style fun. They were more approachable, and in some cases more preferable, alternatives to the Maddens and NBA 2Ks of the world.

But as consoles continued to improve and the simulation-based games got bigger in scope and level of detail, those arcade-style titles steadily faded out of the picture.

With Ultimate Rivals: The Rink, Bit Fry Game Studios wasn’t just looking to step up and fill the void, but also do it in a way that has never been done before.

An exclusive to the Apple Arcade subscription service and playable at PAX East this past weekend, Ultimate Rivals: The Rink is a 3-v-3 arcade-action hockey game that has the NHL license and then some.

See Bit Fry didn’t just get professional hockey’s corresponding licenses and called it a day. The studio instead got way more ambitious, also making deals with the other major sports leagues and their respective players unions.

As a result, Ultimate Rivals currently features a roster of 58 athletes, with its selections spanning across the NHL, NFLPA, NBA, WNBA, Major League Baseball, and the U.S. Women’s National Soccer Team.

This make all sorts of unique lineups possible. For example, Flyers captain Claude Giroux can skate alongside a bruising defensive end in J.J. Watt with a star third baseman in Justin Turner back in goal, or an all South Jersey team of Johnny Gaudreau, Carli Lloyd, and Mike Trout can be assembled.

“It was kind of wanting to do something that nobody’s ever done before,” said Arjun Rao, the game’s lead designer. “This is the kind of thing where people have dipped their toes in the water of crossing over these sports universes, but never on this scale.

“We just wanted to break up all the rules and try something new.”

Players create lineups consisting of a center, winger, and goalie before each game. And each athlete to choose from has their own attributes in offense, defense, skating, and goaltending.

The attributes for the NHL players are easy to guess. Alex Ovechkin, one of the league’s top goal scorers, naturally has great shooting, while defensemen like Cam Fowler or Seth Jones are better at checking and taking the puck away.

For the athletes outside of hockey, however, Rao said the team based a given player’s attributes on the position they play in their respective sport and how they play it.

So take someone like De’Aaron Fox, a star point guard in the NBA. His skill set, carried over from the court to the ice, translates into higher end shooting, passing, and handling.

In a head-to-head game at Ultimate Rivals’ booth, I played with a lineup of Ovechkin, LeBron James, and Odell Beckham Jr. against another attendee’s team of Aaron Judge, Alex Morgan, and J.J. Watt.

The two skaters and a goaltender setup allowed for a quick pace of play and a lot of open ice, which translated into a ton of offense, or at least a ton of scoring opportunities.

“We wanted the gameplay to be quick,” Rao said. “Easy to pick up and playable by one player vs. another.

“We were inspired by games like NHL 94, NHL Hitz, NBA Jam. These games where they had shrunken rosters or shrunken teams, so there are fewer athletes on the rink or on the court at a time, so its easier to process everything.”

The diversity in sports across each lineup also put some of the athletes’ specific traits on display. LeBron, for instance, doesn’t have a slap shot animation. Instead he picks up the puck and launches it toward the net with a jump shot.

Years of muscle memory built up from EA’s NHL games had me keep trying to drive toward the net and sneak the puck through short side or attempt to set up a quick one-timer, but Ultimate Rivals doesn’t exactly encourage offense in that way. Granted, you can still very much rack up goals with those strategies, but my game at least was won by throwing pucks on net and wearing down the opposing goaltender.

Every shot on goal or completed check can add up to gain you two advantages. The first is that constant pressure can exhaust the opposing team’s endurance, which functions much like a health meter. This effects goaltenders especially, as drained endurance heavily slows them down and leaves them susceptible to more mistakes.

The winning goal of my game was the result of peppering Watt with shots until he was running on empty, eventually allowing Ovechkin to pick up a rebound and fire it home on a wide open net.

The second advantage is the Ultimate Ability. By collecting what are called “Bits,” which drop for your players to pick up after every good play, you fill up a meter that can be used to trigger a power-up specific to a given athlete’s native sport.

The Ultimate Ability for NHL players, and Hall of Famer Wayne Gretzky, has them pry the Stanley Cup out of the ice and skate around with it hoisted above their head. Any nearby opponent gets frozen as you skate across the rink, with the finisher shattering them at the end as the player stops to slam his stick down on the ice. It gives you the rink all to yourself for a few seconds, and like the rest of abilities, can either turn, or push the game even further, in your favor. 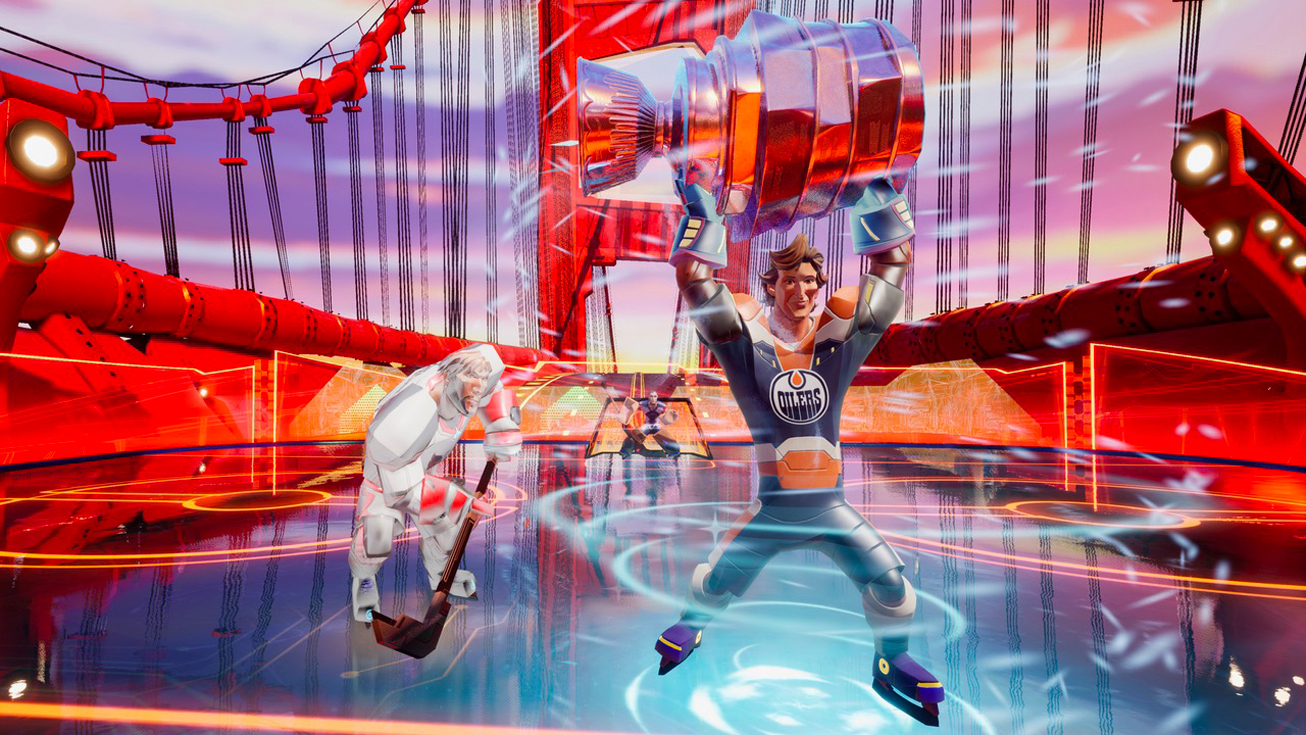 Ultimate Rivals: The Rink released back in December, and Bit Fry has a basketball follow-up in The Court coming later this year.

Rao said the same roster will carry over into the next game when it launches and will continue to expand across both titles.