Sony held its hour-long presentation to showcase the PlayStation 5. Highlighting the system’s GPU, 3D audio, and much more.

The presentation involved a lot of graphs and charts as system architect Mary Cerny explained how the PS5 would surpass the PS4. With shorter load times, better sound quality, and overall easier for developers to create games with.

Eurogamer provided a handy chart about the system. 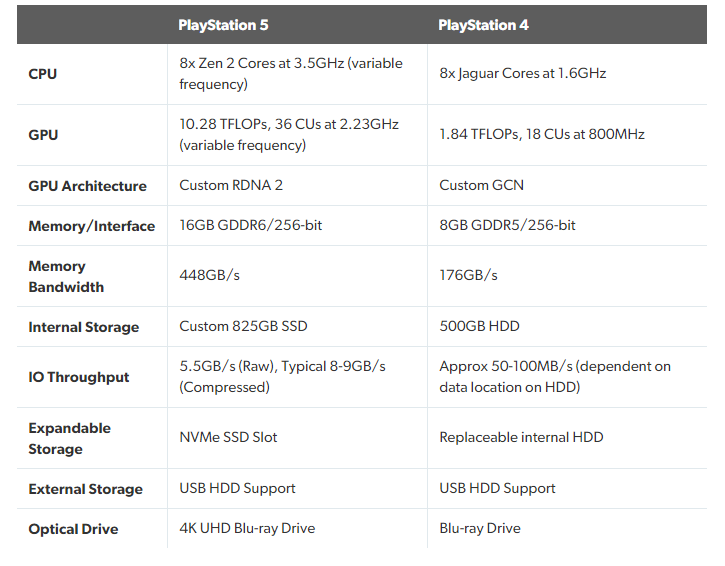 Sony will run on a customized AMD RDNA 2 GPU with the workload adjusted based on both the GPU and CPU. The CPU being a Zen 2 from AMD.

The PS5 will deliver ray tracing through the Intersection Engine but what took up most of the presentation was the SSD.

About 20 minutes was taken to talk about the SSD. Which will provide quicker loading times and storage options. With the user able to store PS4 games on an external drive and play it on the PS5.

Cerny also spoke about 3D audio and how it will allow users to enter the “Matrix”. Providing perfect audio regardless of setup.

To precisely simulate accurate positioning, Sony needs to generate a table called the Head-related Transfer Function – HRTF – ideally on a per-person basis. How you perceive audio can be simulated by processing the soundscape through that table – a computationally expensive task to say the least. The Tempest Engine is effectively a re-engineered AMD GPU compute unit, stripped of its caches and relying solely on DMA transfers – just like a PS3 SPU. In turn, this opens the door to full utilisation of the CU’s vector units. (Eurogamer Richard Leadbetter)

If you were hoping for the system to be shown or some gameplay, unfortunately, no. Sony is waiting to reveal the system at a later date. Even though the PS5 is set to launch this year.