Playing Hindsight 20/20 – Wrath of the Raakshasa felt like walking a tightrope.

I had reached the end of the demo brought to the PAX Rising booth, but I didn’t do it gracefully. It took a long time, and frustration with a pacifist approach that’s worked numerous times before in games of a similar makeup led to a couple of reckless and, as far as I knew, costly decisions.

I loved what I had played when the time came to put the controller down, but I didn’t feel like I won.

Instead, I was thinking about all the things I could have done differently to maybe see a better outcome, or at least what I thought could’ve been the right one (because the demo didn’t end all that well for me).

That’s the catch though, as the game’s creative director Hemanshu Chhabra explained afterward, there aren’t any right choices, and there won’t be in the finished product either.

“The backbone of this game is moral dilemmas,” he said. “We’re trying to explore the huge gray area between good and bad.”

An ambitious action-adventure title, and a passion project for Chhabra and the rest of the four-man team at indie studio Triple-I Games (composed of veteran developers from acclaimed studios like BioWare and Sucker Punch), Hindsight 20/20 is aiming to have players craft their own stories through their own choices, while leaving them to deal with every consequence that results from it.

“This game is about making choices in the moment,” Chhabra said. So what might seem like the right call now could backfire later, while a brash decision could inadvertently pay off down the line.

Though it remains to be seen how this will play out over the entire game, that core idea was present throughout every aspect of the demo (from the narrative decisions players make through the game’s dialogue all the way to how they decide to fight).

I had left feeling like every second mattered, because in a lot of ways it did.

Taking control of the protagonist, a one-armed warrior named Jehan, the demo starts with a friend and fellow villager filling you in on the situation.

Your friend Andrew has been infected by a blood-thirsty breed of creatures called the Raakshasa, and out of fear that he’s likely to turn, the village sheriff and your father’s killer, Aurthur, had him arrested. It’s here where you make your first decision, go after Aurthur and try to save Andrew or leave them both behind out of your own self interest. Naturally, most (myself included) are inclined to choose the former and the mission kicks off from there.

You storm off to where Andrew’s being held captive, but Aurthur’s guards are there to try and stop you along the way. You’ll have to fight your way through.

There are two weapons to choose from in combat, each representative of a different style you can use and each equipped with their own set of special abilities to unlock.

The first (and the one I initially opted to go with) is the stun baton, which is used to incapacitate enemies for a merciful approach. The other is a sword for the obviously far less gentle ruthless style.

The baton comes with a bit of a learning curve, but was open to a bit more creativity in the demo if you could get a handle on it quickly. Chaining two hits together earns you a one-hit takedown on the third if you land it, and keeping the combo going will allow you use a move that sends a shockwave through the ground to clear out any surrounding enemies. 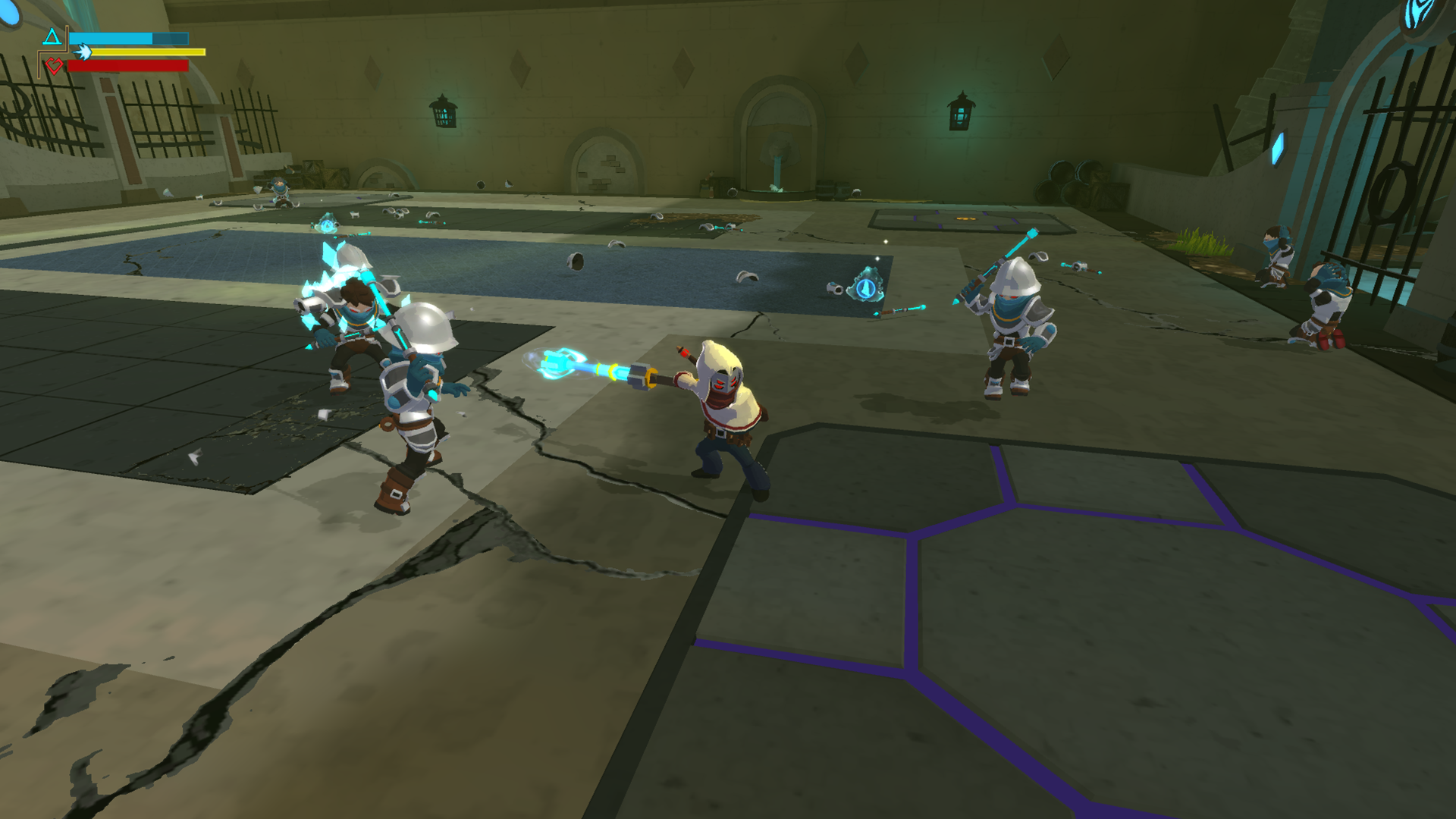 I got through the first wave of guards using the baton but struggled to do it, settling into a rhythm where I only got a couple hits in before using Jehan’s dash to get out of trouble. It was a process and a lengthy one at that.

On the second wave of guards, I caved and pulled out the sword. The encounter got way bloodier in exchange for getting easier. Using the sword shifts combat into a more approachable hack-and-slash gameplay setup. It also changes how enemies try to fight you.

What I didn’t realize initially was that the guards were far more aggressive when I had the baton out. They weren’t afraid to charge in because they knew their lives weren’t at risk.

When I switched to the sword, however, things changed. The guards got conservative and tried to keep their distance. They started making use of projectiles too. There was actual fear. 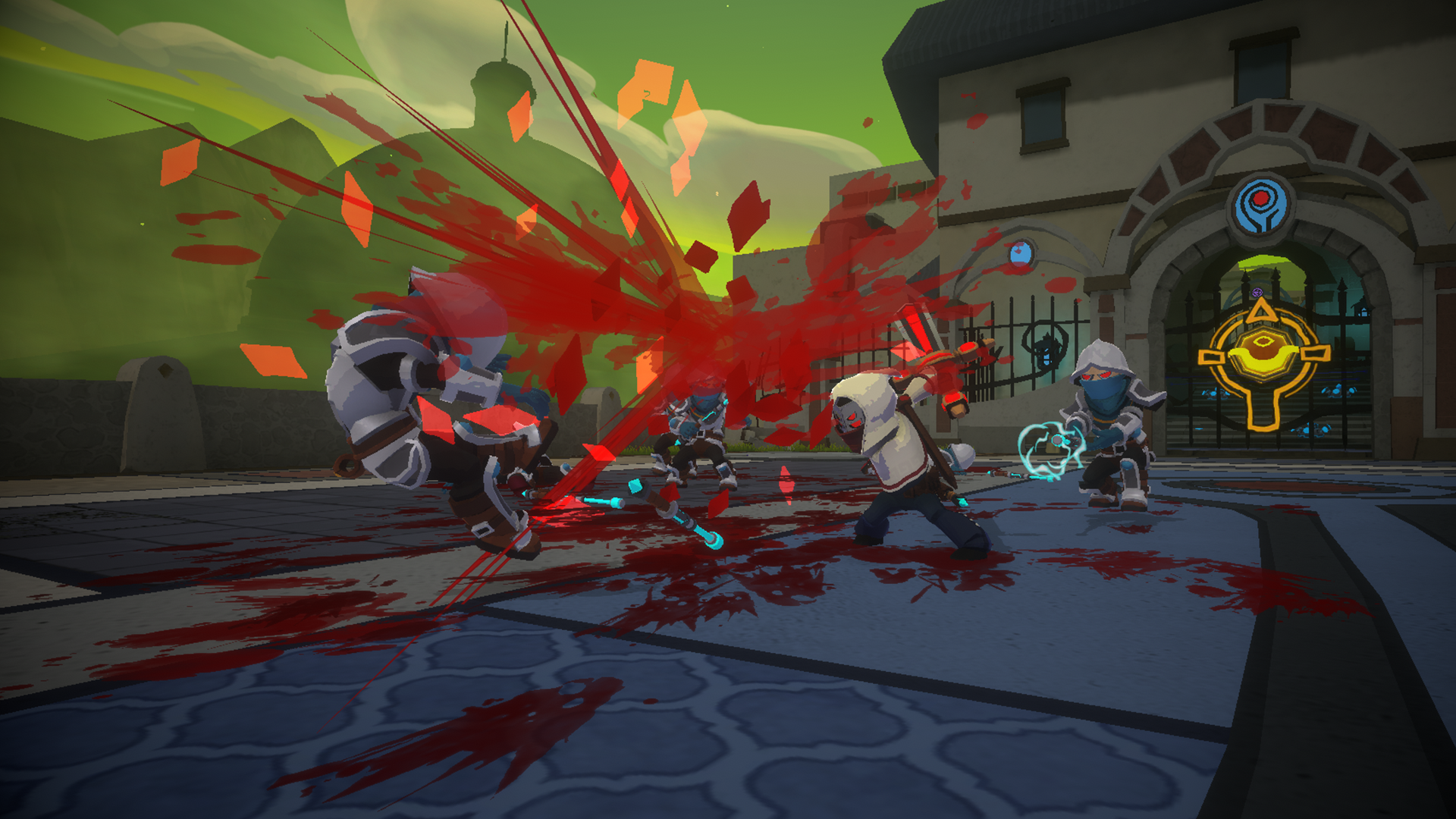 After regrettably spilling a lot of blood, Aurthur was waiting in the next area and knew what I did to his guards. He was upset. A boss fight was looking pretty likely.

A conversation started and there were multiple ways to approach it. Depending on your dialogue choices, you can learn why Aurthur cut down Jehan’s father and get insight into the threat facing the village from his perspective. You can even skip the fight with him entirely if you play your cards a certain way, a route Chhabra showed me afterwards because I had no such luck.

The battle kicked off and I went back to the stun baton in an effort to keep Aurthur alive. It worked, but again, it took a while. And as Chhabra emphasized with every decision that could be made in the demo, that might come back to bite me later in the full game.

I definitely felt the immediate consequences though.

Aurthur had backed down. It was time to rescue Andrew. But I was too late, he was gone.

All the time I spent trying to make the merciful approach work was time I didn’t spend getting to Andrew. Facing the possibility that he could turn into a monster, he had jumped to his death before I ever got a chance to talk him off the ledge.

It was a bitter moment, but at the same time, a remarkable display of Hindsight’s narrative and gameplay seamlessly complimenting one another. The scenario called for a sense of urgency and by choosing to take my time, I had unknowingly made a game-altering decision.

“Choice is the number one pillar in this game, and what was really important to me was to have moment-to-moment choices matter and meta choices matter,” Chhabra said. “So it had to matter in any feature that was going in the game.” 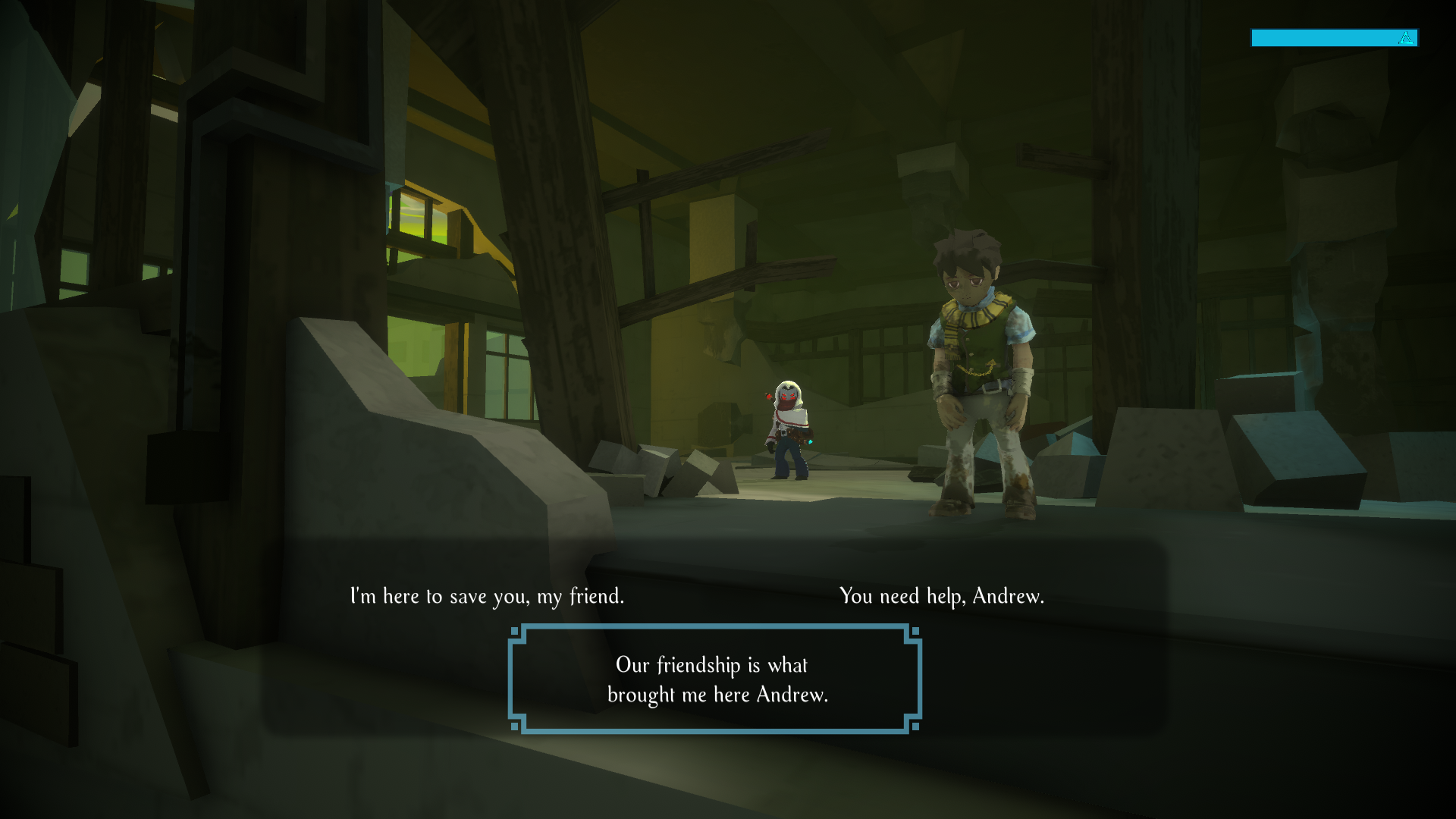 According to Chhabra, there are going to be a lot of different ways Hindsight 20/20 can play out depending on a given player’s choices. The team even wrote a new engine specifically for the game, dubbed the “Experience Engine,” to record everything a player does in their respective playthrough. With that, all NPCs and bosses will be aware of your actions and can react accordingly, shaping the path of the story on the fly.

“The entire experience is going to be your story,”  Chhabra said. “Not us telling you this should be your story.”

The team at Triple-I Games is hoping have players begin shaping their paths either in Q3 or Q4 of this year, with Hindsight 20/20 planned to release on the Nintendo Switch, PlayStation 4, Xbox One, PC, and Mac.