We all love video games, but let’s face it, mandatory updates can be a thing of nightmares. I still remember installing Call of Duty: Modern Warfare (which was a massive download) and then doing the updates (also massive). At one point I just let my computer install and read a book. The install/update time for a game on Stadia is approximately 0 seconds.

If you’re confused, let me explain. Google three months ago launched their much-anticipated cloud-based game streaming platform called Google Stadia. For those having crushing flashbacks to the OnLive days, let me assure you it’s nothing like it’s cloud predecessor. That being said, it does have a lot of growing pains even three-months later. Reviewing a thing like Google Stadia shouldn’t be just as it launches, so I took the time to go through it for three months. These are my findings of how it performs now.

Head in the clouds

With any new technology, it’s hard to quantify its exact value, purpose, and potential in the initial few weeks it launches. It’s part of the reason why we’re posting a review three-months later: to give Stadia nearly a quarter of a year to develop, mature and to give us true, quantifiable feedback based on its performance, business model and overall purpose. So, what is Stadia’s purpose? Google positioned Stadia to subvert gaming norms by removing the limitations of hardware and streaming the game directly to your TV (via a Chromecast), your laptop (via a chrome browser) and your phone (not all devices are supported yet).

Instead of Netflix asking you “Are you still watching “Friends”? while you’re clearly passed out on your bed, imagine doing the same thing with a video game streamed directly to your device. While it’s not necessarily a new concept, the Stadia so far seems like the most hassle-free of its competitors. When Stadia launched, Microsoft’s Xcloud was still in beta, as was GeForce now. Flash forward to today, Xcloud still remains in beta with various limitations including being restricted to mobile-only, and GeForce now while out of beta, is a pain to setup. The Stadia was first to market between the three, but the consequences of not having a beta cycle unlike its competitors have been a dominant issue since launch.

Stadia, simply, was not ready for launch.

The one thing Stadia does very well is the overall streaming performance of the streaming subscription. I conducted a series of tests based on various wireless, direct-connection and mobile tests for the Stadia and it was impressive across the board. At home, I have a pretty impressive internal plan that gives me an average of 191.61 MBPS (megabits per second) and a low ping of 7 (data based on Speedtest by Ookla). According to Google, you don’t need a quarter of this to play a game on Stadia well: 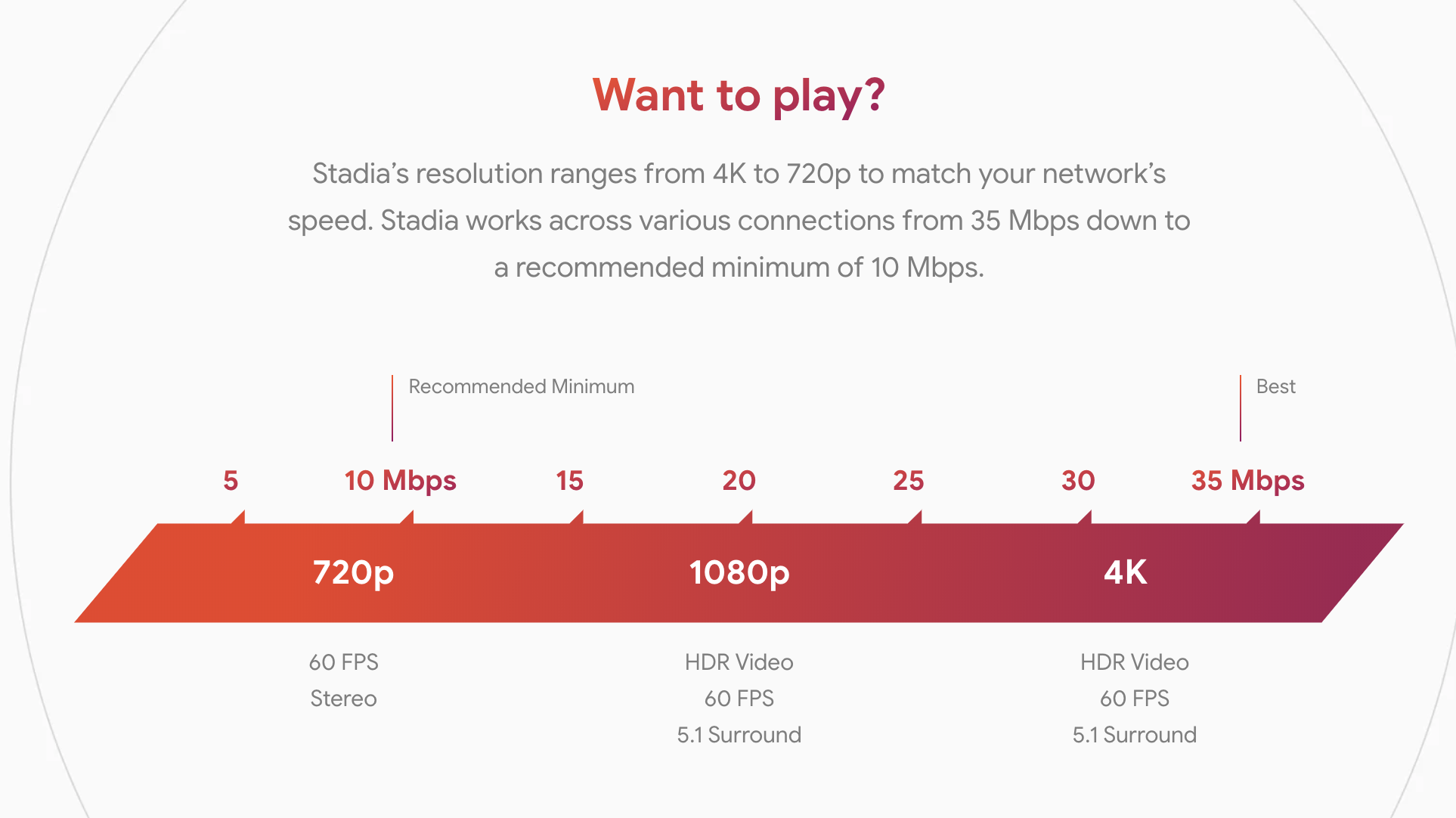 While this is the suggested speeds needed to play on this scale, the actual results are a bit mixed. There have been many times where even on my internet connection I experienced artifacting, lag, and disconnects. Growing pains yes, but still an annoyance when you’re not trying to get killed in Assassins Creed: Odyssey. While I did experience this a few times, my overall experience with it was quite positive.

I also tested Stadia in three more scenarios: over wireless at my girlfriend’s house, at an office space in Downtown Toronto and on a Google Pixel phone on wifi. In the first scenario, I could easily log in to Destiny 2 and go to Xur to pick up that week’s exotic, or putter around the ruined metro tunnels of Metro: Exodus, both of which ran well and looked great. The second scenario was similar, with a bit more artficating while the mobile version of Stadia looked great. The one important thing to note are the actual quality and frame-rate: Both Assassins Creed: Odyssey and Metro: Exodus was not rendering at 4K or 60 frames. Destiny 2 as well was not running at 4K, but was running at a smooth 60 frames.  Google made the mistake of claiming that the games would run at these parameters right out the box, which damaged a bit of the credibility of the Stadia. That being said, it’s still quite impressive. 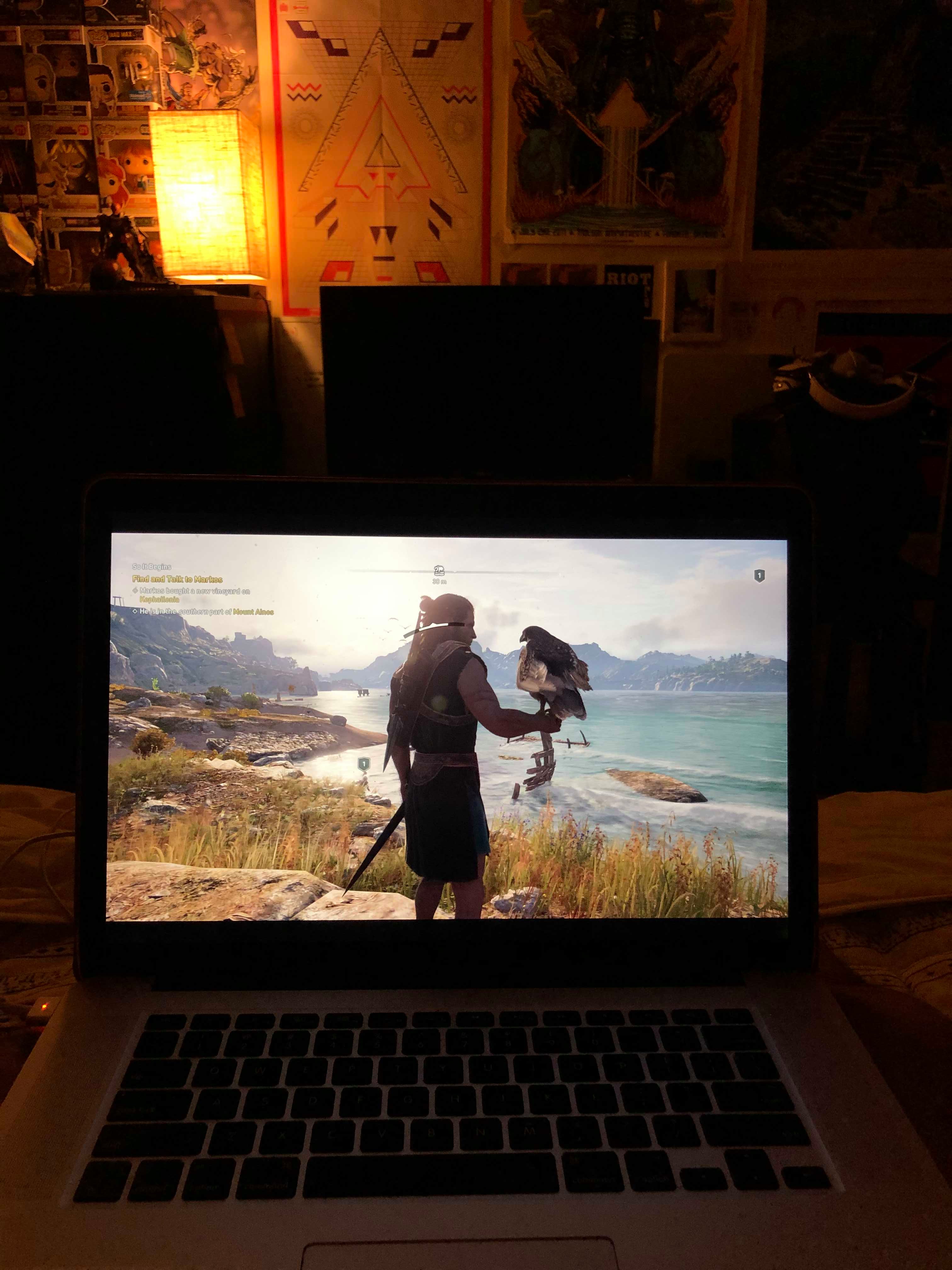 The third scenario was an issue. In terms of performance, the games ran great on wifi, but living in Canada, data plans aren’t cheap. Obviously this is not a fault on Googles part, but a limitation for people who are restricted by their data plans since Stadia eats up data for dinner. Doing a mobile test outside of wifi was basically impossible for me. Stadia’s performance overall as an impressive feat, it’s a shame then that I can’t say the same for their business model.

Google’s business model for the Stadia, will be its greatest downfall unless they pivot very hard. Microsoft’s Xcloud and Nvidia’s GeForce now both have something in common: an affordable subscription service that allows you to access a vast library of games either available or already owned by the consumer. For example, GeForce now allows me to access my games I already own on my steam account which is fantastic. Stadia, took a much different, determinantal approach to attracting a larger user base.

As of right now, every game on Google Stadia is full price, and you have to purchase it outright unlike Xcloud and GeForce now. Even though Assassins Creed: Odyssey is two years old, I still had to pay full price to get the game which is insane considering the game is always on sale on Uplay (Ubisoft’s native store) and other platforms.

Having Stadia’s pro-subscription allows you to get 1-2 free games a month, and some discounts on games. At launch, the only way to get this subscription, however, was by purchasing the founder’s edition of the service. The founder’s edition retailed at a $169 CAD which came with the Stadia controller, a Chromecast ultra and 3-months of premium: a steep price for getting into a streaming service, especially with GeForce Now’s low barrier of entry. 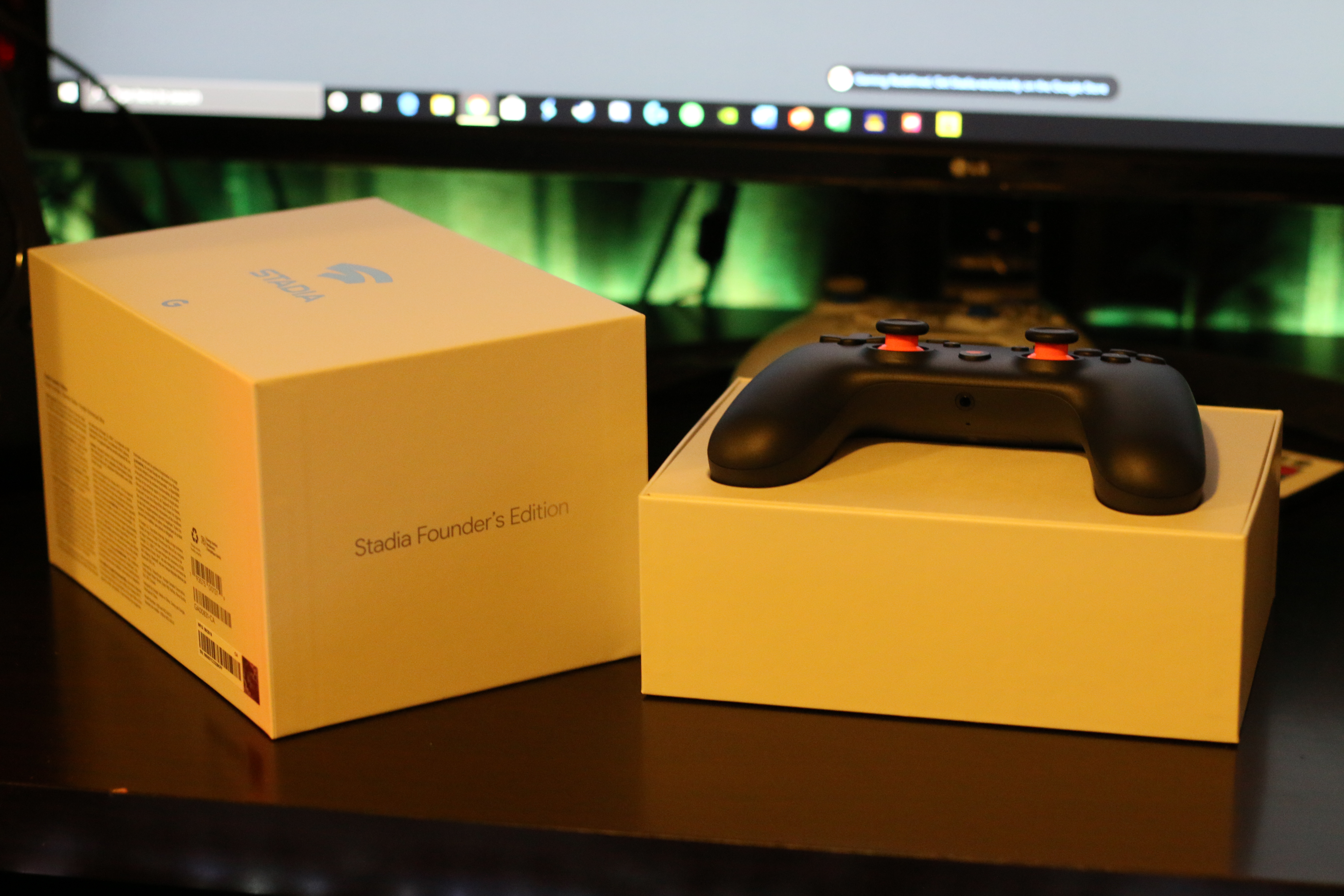 Google Stadia has a lot going for it, but it’s completely overshadowed by the awful business practice surrounding the streaming platform.

Is the future in the cloud?

With Stadia’s mixed business model, relatively low marketing efforts and subdued communication by Google itself, the question on my mind is.. who is Stadia for? My answer to that, is that it’s for anyone who is tired of being limited by physical hardware. Being a PC gamer with a relatively powerful rig, even I’m not thrilled at the idea of upgrading my rig in the next few years. These upgrades cost money, time and effort for upkeep. I’m reaching a time in my life where even I think my money could be better spent elsewhere. Stadia right now is not the future or even the present I want, but there is a bright future here for those who want to play games without having to be saddled by 100GB+ updates, long install times and worrying about whether their setup can handle the game or not.

While I do think Google jumped the gun in the launch of Stadia, I also strongly feel that streaming is the future of gaming. I know, controversial statement and hey I could be wrong, but it just makes the most sense. Like all new technological movements, it is usually met with resistance. People will say “But I want to own my media!” or “my internet won’t be good enough”. The reality is that most media is in the cloud now anyway, and physical media’s valuation is next to nothing (just go to your local game store and find out the hard way). As for the internet worry, plans are becoming drastically cheaper and if you weigh the price of a brand new rig or next-gen console, versus a higher premium for your internet costs, you would be surprised by the numbers.

Google Stadia alone is not where it should be right now, but it is a signal for something else. Streaming services have the potential of becoming an interesting movement in the coming years, which will give more people the opportunity to game. End of the day, isn’t that what gaming is about? The more the merrier?

While the platform has a long way to go, it is paving the way for an interesting future.Even the head of  Microsoft’s Xbox operation sees the potential of game streaming:

“When you talk about Nintendo and Sony, we have a ton of respect for them, but we see Amazon and Google as the main competitors going forward….That’s not to disrespect Nintendo and Sony, but the traditional gaming companies are somewhat out of position…I don’t want to be in a fight over format wars with those guys while Amazon and Google are focusing on how to get gaming to 7 billion people around the world” – Phil Spencer, The Verge.