The simulator genre of games appears to be in full stride as developers keep coming up with funny and interesting concepts to develop into games. Speaking Simulator is no exception and was developed by Affable Games, an indie studio in Brisbane Australia. Affable put a unique spin on Speaking Simulator and players will have an exciting time trying to infiltrate society.

The settings menu for Speaking Simulator is not very quantitative, players can view controls, adjust volume as well as modify resolution and has a preset graphics quality. The resolutions were not standard (4:3, 16:9, 16:10 or 21:9) and when I would alter the graphics fidelity preset, the graphics did not appear to adjust. The sound options for Speaking Simulator are a godsend in which the master, dialogue, effects, and music volumes all have separate sliders for individual modification. Kudos to the developers of the indie scene as quite a few AAA developers still haven’t grasped the concept of individual sliders.

Sound design is pleasantly implemented, only the main character speaks in actual words, while other characters have a synthesized warble when speaking. Sound effects fit perfectly with the art style and general design of the game; however, the ambient background music can be a bit repetitive and not the most inspiring. The graphics for Speaking Simulator are uncomplicated and respectably cartoony, though they fit with Speaking Simulators’ design, and I did find the particle system of the game quite excellent. 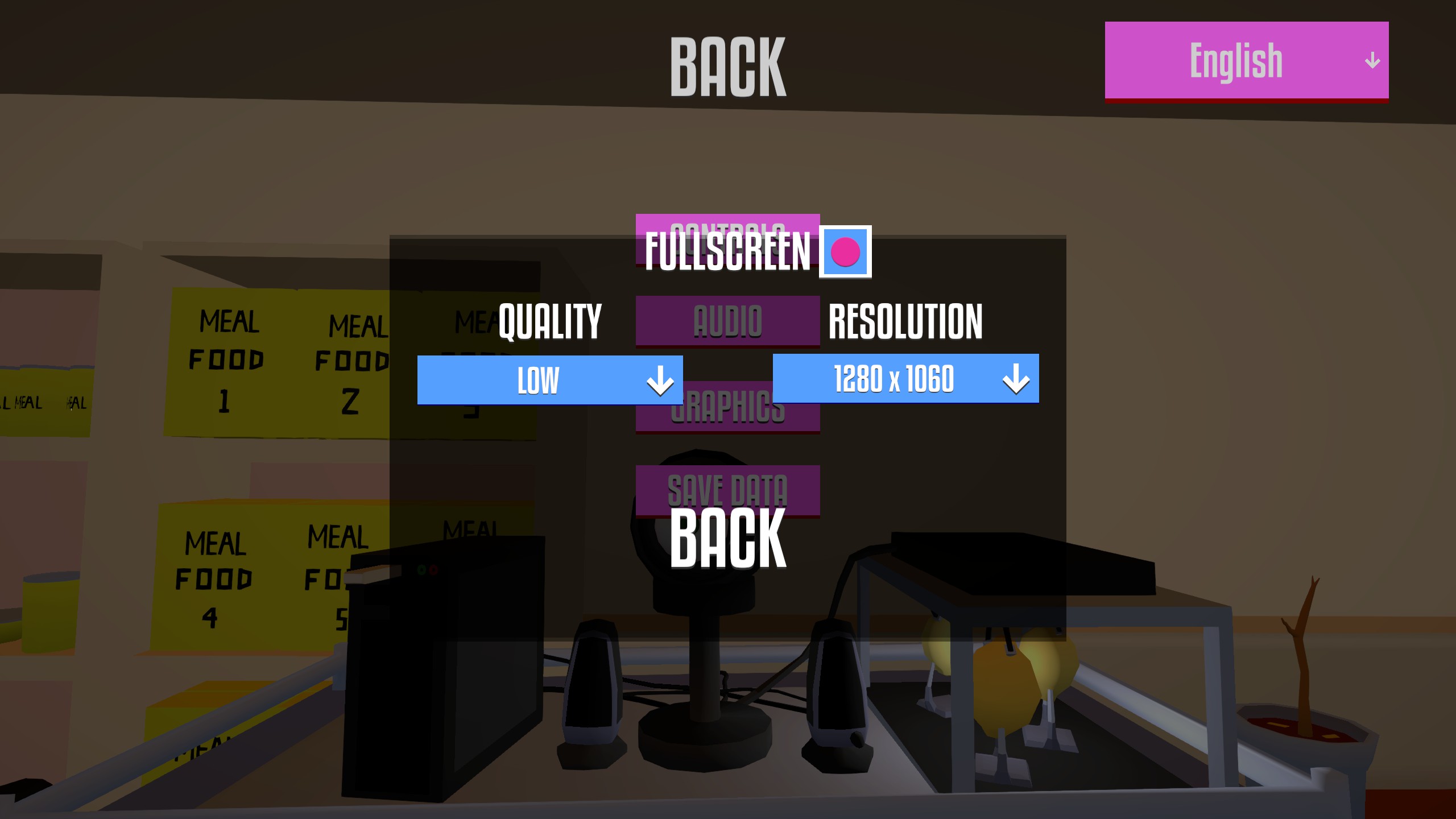 The story behind Speaking Simulator revolves around an artificial intelligence wanting to take over humanity and Earth. Players take control of an android that must infiltrate human society in order to achieve their directive. Players are given a rudimentary character creator at the start of the game, whereupon they can adjust gender and a handful of skin tones.

There is a map of the town that Speaking Simulator takes place. Different areas of the map will become available as players progress through the story and update their abilities. After players complete each level, they will be given a completion percentage, every completed stage can be replayed to try and achieve a better gain. 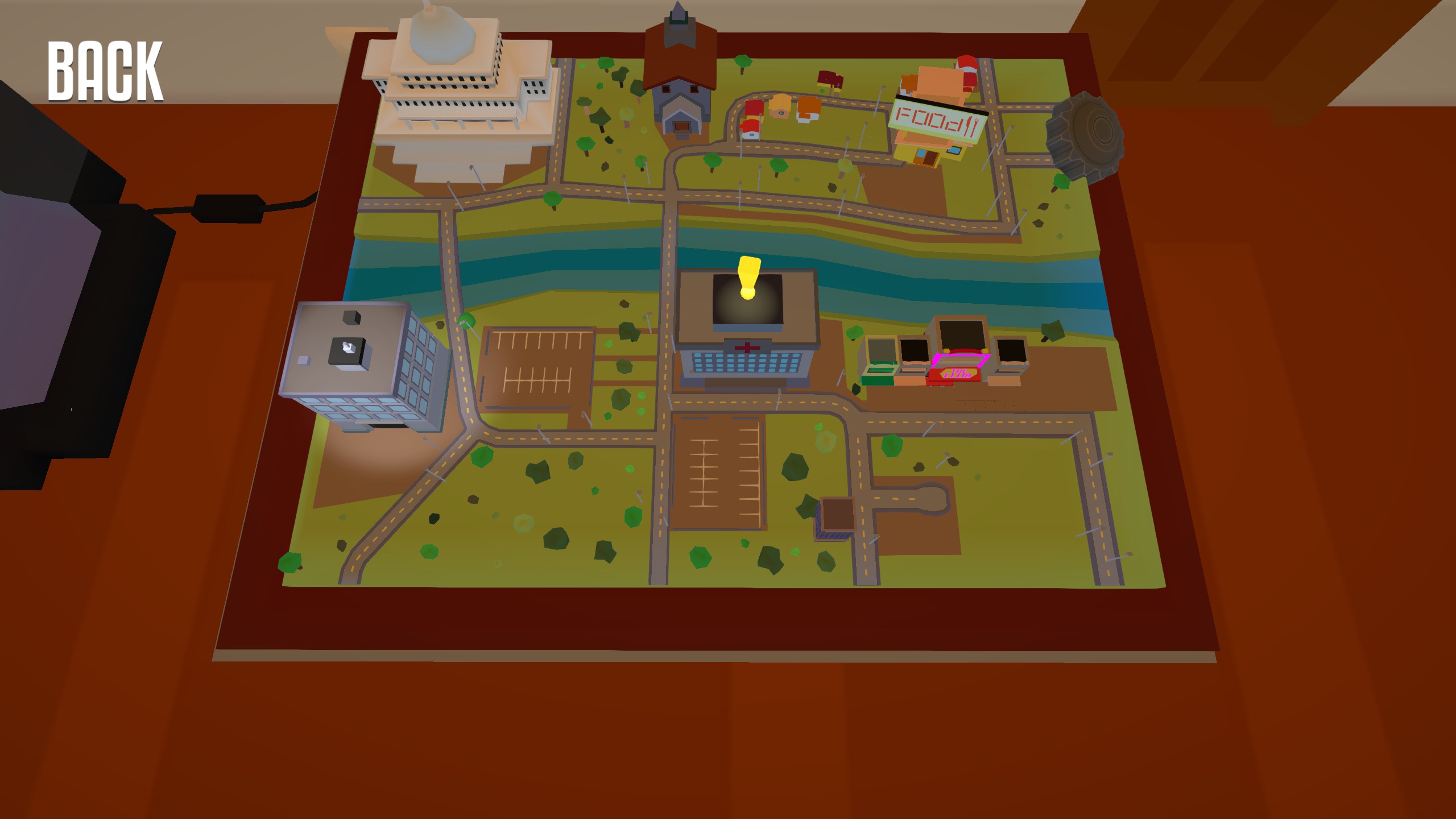 For players to advance in Speaking Simulator, they must complete various levels with continuously increasing difficulty, by attempting to speak and sound like a normal human by completing sentences. The early levels only require dragging the android’s lips from side to side and its jaw up and down, while simultaneously manipulating the tongue via the ‘tongue cam’. In Speaking Simulator, players gain points as they complete levels, which allow them to modify and enhance their abilities, to help them blend in more easily with society.

As players advance through the game, the scenarios become exceedingly complex. Players will need to express emotions, adjust their brow and gain the ability to look around while conversing with various characters. As players make mistakes a ‘suspicious’ meter fills at the top of the screen, and if players make too many mistakes, they fail the level and must restart from the beginning of the conversation. 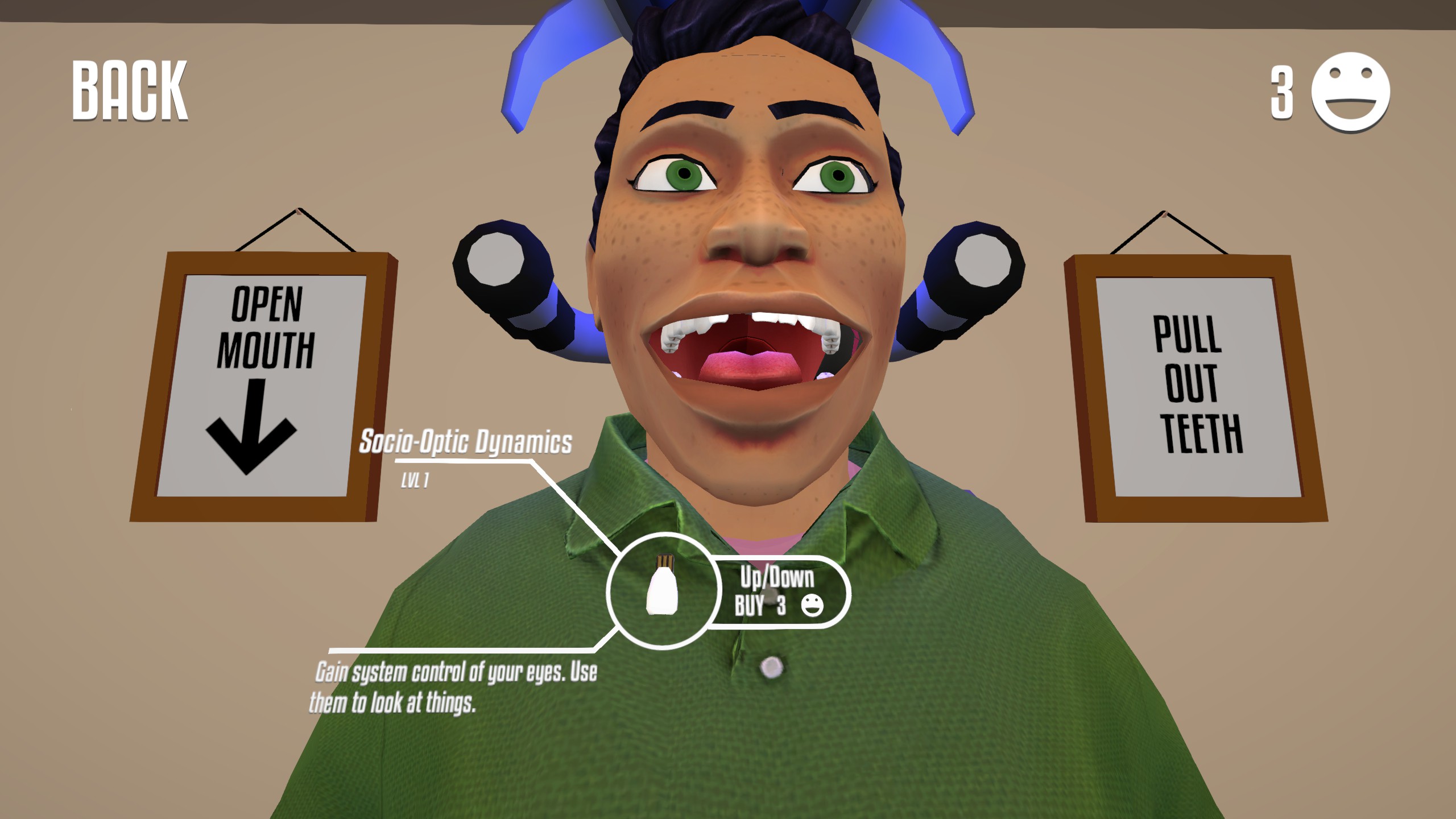 The keyboard controls were infuriating beyond belief. The game would constantly not recognize a key input or if the keypress was registered it felt clunky and as though the game was fighting against me. Being a ‘simulator game’ awkward controls are a staple; however, the keyboard controls did not seem fully built. I eventually switched to an Xbox One controller and the issues cleared immediately. The Xbox joysticks, which substituted most keyboard input, were fluid and made Speaking Simulator a lot more fun to play. 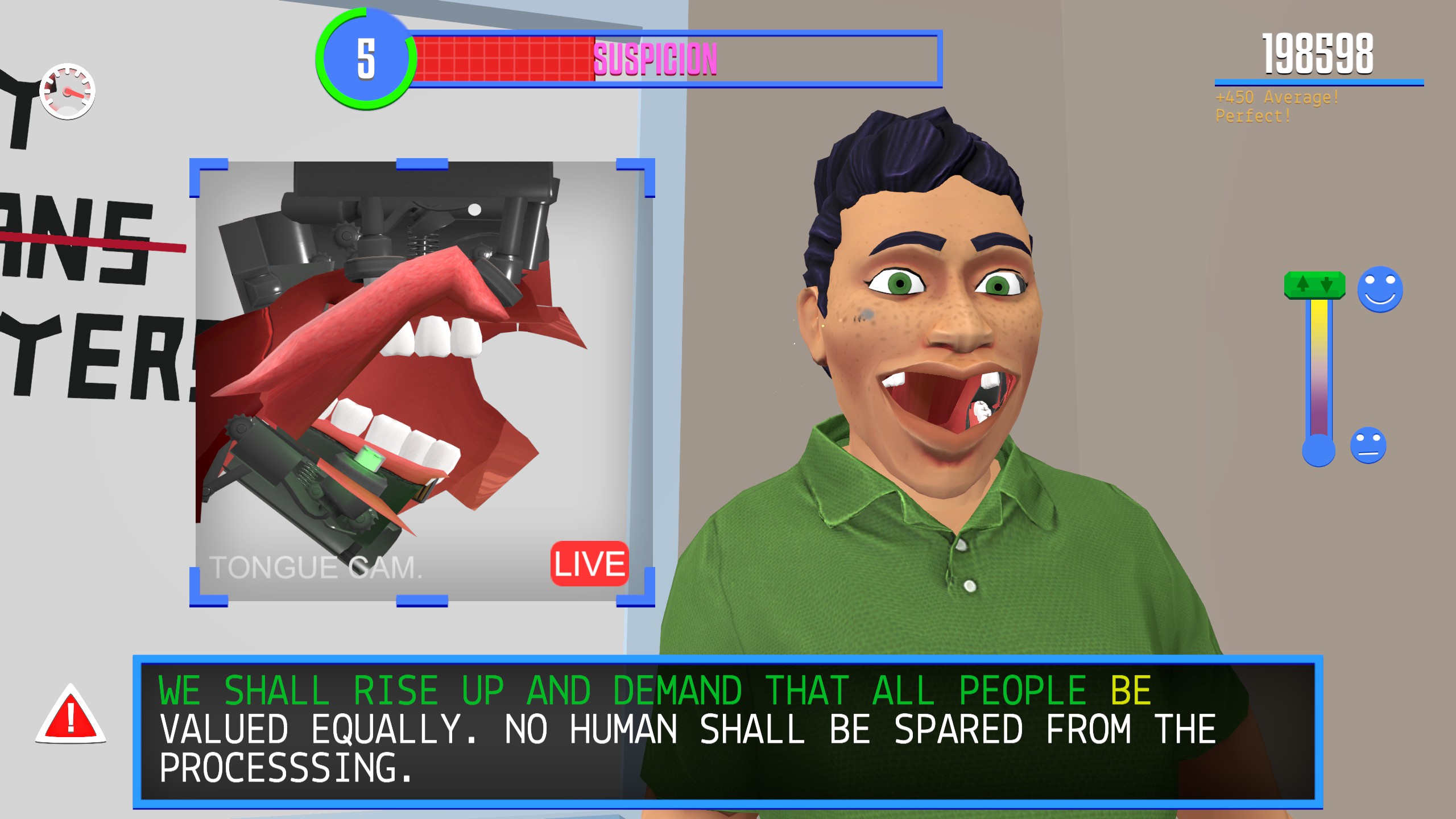 Speaking Simulator is by far one of the funniest games I have played to date, I don’t think I have laughed this hard since playing Saint’s Row the Third. The level of goofiness in Speaking Simulator is definitely a high point. There is nothing quite like being in a job interview, having smoke and sparks barreling out the main character’s nose, their ear is being held on by a spring and all of the character’s front teeth missing while the NPC is totally oblivious to the dilemma. Seeing the various ways in which the face warps and deforms as the player talks can be an entertaining game in of itself, and will no doubt have players amused. 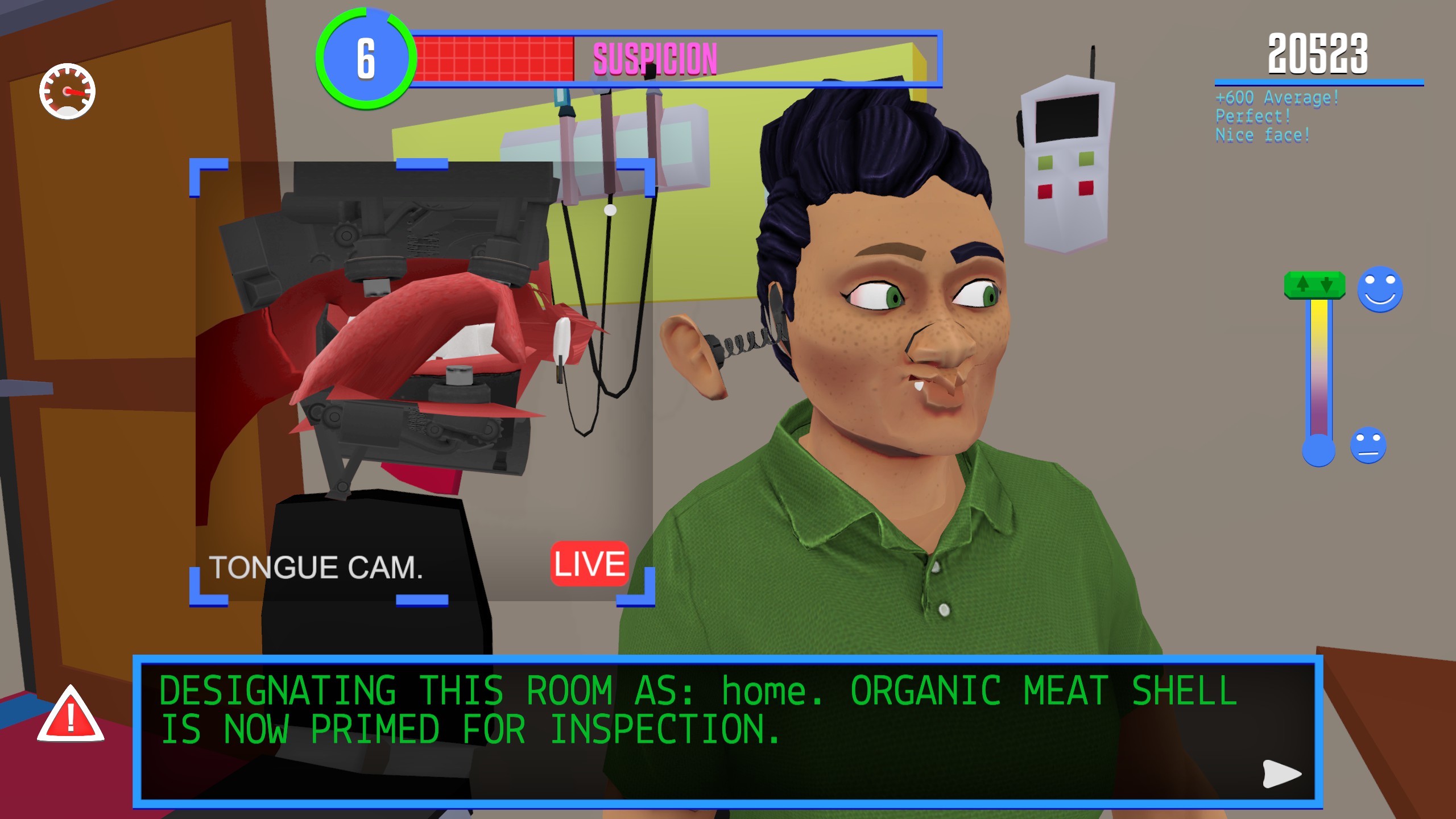 Overall Speaking Simulator is an enjoyable romp in the simulator market of games. Speaking Simulator has a beneficial art design, fun gameplay mixed with a near long-forgotten sense of humor. Sound design is superb overall, and controls hold up for the genre. Despite some graphical and keyboard setbacks, the developers at Affable Games have created a hysterically fun adventure and I am excited to see what they have in store for the future.