Life is Strange 2 Episode 5 attempts to wrap up Sean and Daniel’s story. Providing multiple endings that condense Daniel’s actions based on how Sean has raised him. Episode 5 does provide a lot of emotionally charged moments as Sean makes his final choices but in always an extreme manner. Episode 5 is just as emotionally charged as the previous Life is Strange finales with Sean and Daniel’s adventure ending with lots of tears. 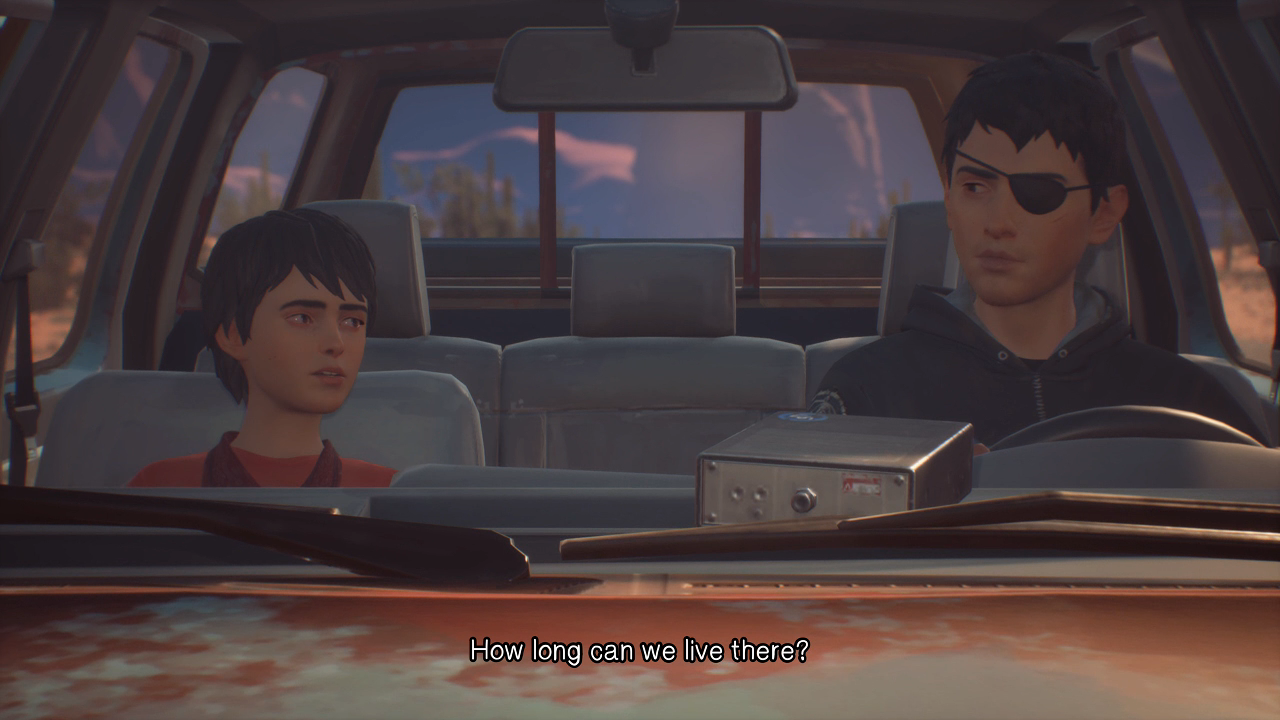 Taking place weeks after the events of episode 4. Sean and Daniel are still in hiding. Their mother Karen has set them up in a small community known as Away. Here everyone has set up new lives after leaving their old ones behind.

The community is very friendly and it’s clear that Sean and Daniel have spent significant time with everyone here. Unfortunately, you don’t see any of that. Instead, you’ll have to interact with a lot of random items to get a picture of what has been going on.

While the new cast of characters offers insightful looks into their past and the reasons they live in Away they’re just tiny parts of this episode. Most players will find established characters more interesting than the new ones. I found it much more interesting to see what Cassidy wrote to Sean in a letter or what Lyla had on her Facebook page than anything these 1-off characters said.

Sean and Daniel are still the stars. With Daniel becoming more comfortable with himself based on how Sean has been raising him. Either aggressive and violent or relax and moral. This is reflective in the dialogue immediately, showing off 2 different versions of Daniel depending on whether he’s low or high morality.

Of course, the primary goal remains to cross the border into Mexico. Getting there isn’t easy and the brothers, along with their mother and Away, try to help them any way they can. This leads to a lot of seriously tense moments. With Sean and Daniel having to quickly decide how to take on new situations. Often resulting in Daniel acting on his own based on how Sean has raised him since episode 1.

The narrative closes with 1 of 7 endings. With all of Sean’s decisions resulting in him losing control of the situation and having to accept it. And that’s where a large issue is brought up, Sean’s suffering for someone else’s actions.

Those who’ve followed Sean and Daniel’s adventure since the beginning know that this started when a cop shot their father. Sean and Daniel ran in the aftermath and since then have committed several crimes to survive. But given that the cop who shot his dad started all this it seems strange to see that Sean would end up in jail or leaving the country forever. Without an option that would result in somewhat of a happy ending. It just seems strange that the most extreme options are the only ones available and there’s no in-between. 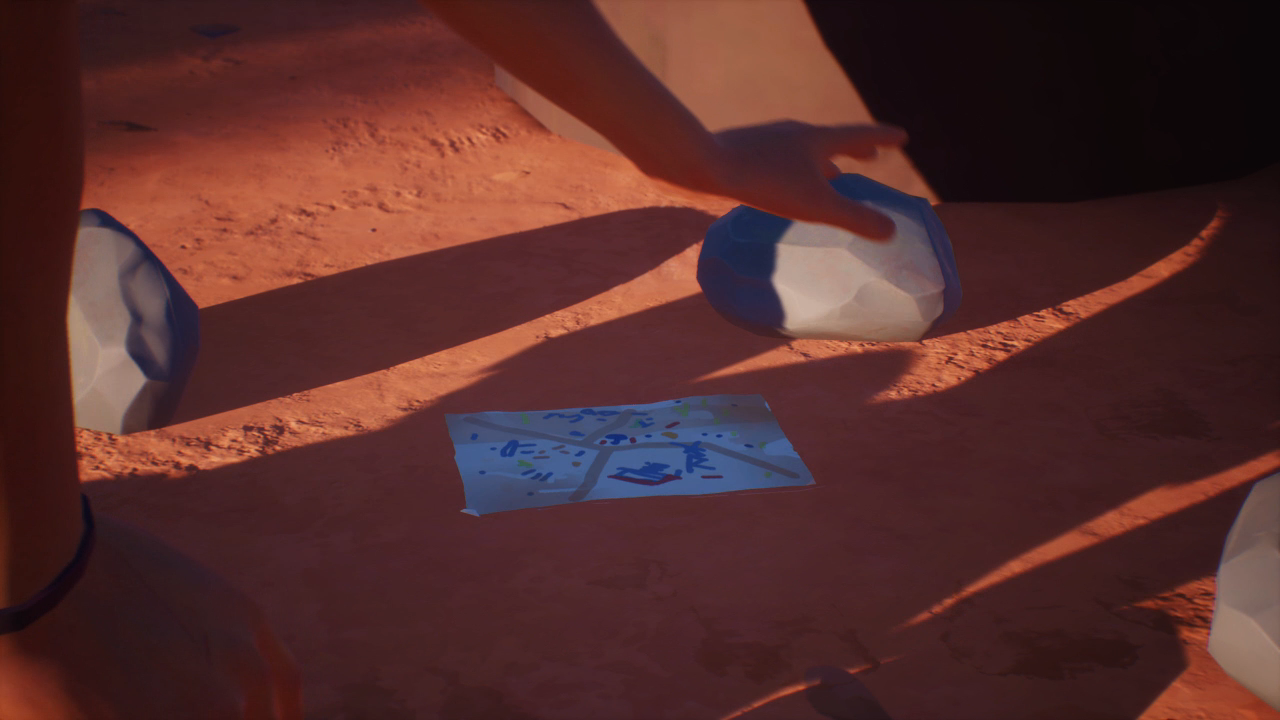 As stated, this episode takes place weeks after episode 4. Sean has been staying with the community Away and established bonds with everyone. And to understand this you’ll have to interact with a lot of objects, and I mean a lot. This isn’t required but you’ll need to do this to get a full understanding of the present situation.

Life is Strange is notorious for this concept of storytelling and in this situation is makes the connection of Sean and Daniel to Away weaker. Going up to random items and having Sean talk about stuff they’ve done made me care little about these people. I was much more connected with a simple letter from Cassidy than anything that transpired with the other community members. Only 1 member I did connect to I cannot say for the sake of spoilers but those who played Life is Strange 1 and Before the Storm is in for a treat. 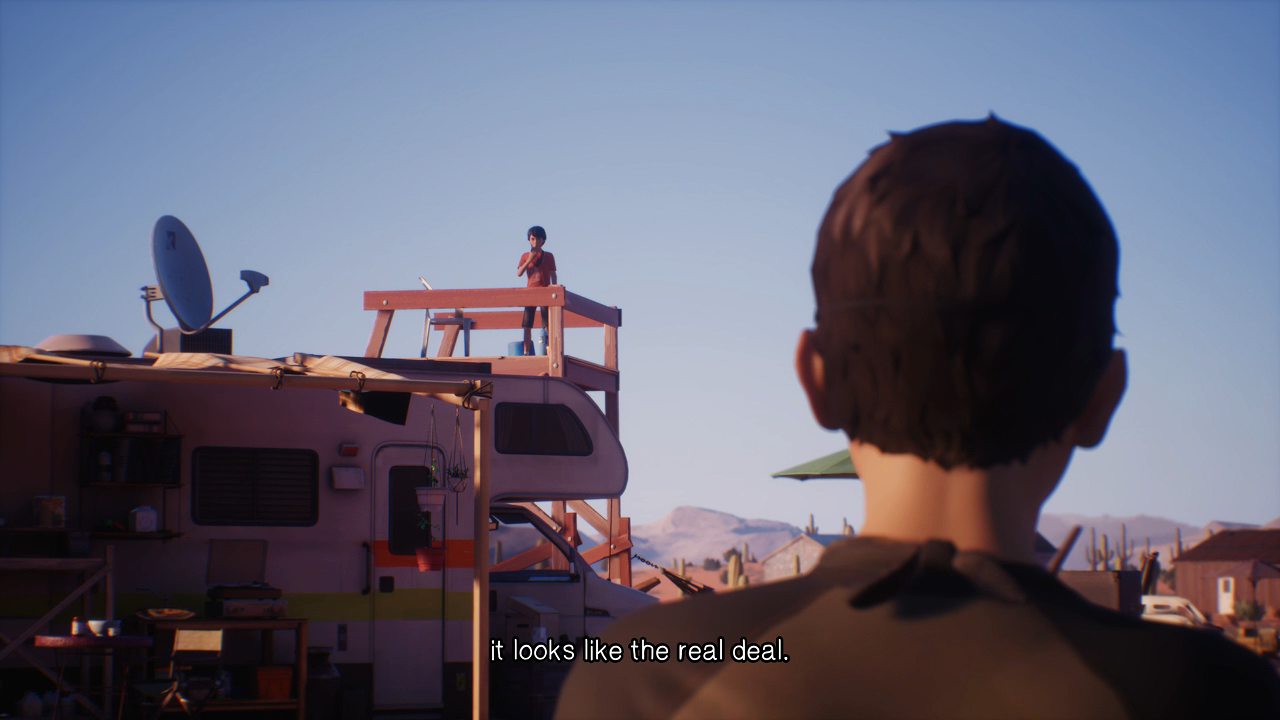 What’s Wrong With Your Mouth?

Dontnod did decide to take more time to develop the episodes following episode 2 after it released with a lot of technical issues. This time, there’s only 1 major problem. After completing the sculpture for Joan that game would cease progress. Daniel has to speak to you after this scene to trigger the next event but often he would not do this. It happened when I helped with the sculpture and when I didn’t, forcing a restart each time.

Another issue comes from the lip-syncing. Fortunately, this doesn’t happen during the ending but during the scenes leading up the ending it a frequent issue. Once you notice it, it’ll be hard not to. This is a minor issue compared to game-breaking bug but seeing Sean’s mouth flap up and down while saying something was hard to overlook.

The finale for Life is Strange 2 ends in some extreme manner. Either in tears, explosions, or blood. With no in-between option considering that one should exist since everything started with that cop who killed their father. Daniel’s upbringing and Sean’s choices condensing into a series of final actions do give ample reasons to think through all your past actions. Especially when control is out of Sean’s hand. The technical issues will likely be resolved in the coming weeks but for now, they’re minor annoyances. When taken as a whole, Life is Strange 2 Episode 5 combines all the decisions you’ve made since episode 1 and provides a fitting end.