Luigi’s Mansion has always been a cult classic since the franchise debuted back on the GameCube. A second game launched for the 3DS called Luigi’s Mansion: Dark Moon but now a fully-realized third installment, Luigi’s Mansion 3 is now available on the Nintendo Switch. And it’s everything a fan of this franchise could want. While also providing an engaging and easily accessible adventure for those unfamiliar with the series. Luigi’s Mansion 3 is a beautiful and imaginative adventure full of interesting areas and bosses to encounter. Topped off with a decent and surprisingly challenging multiplayer. 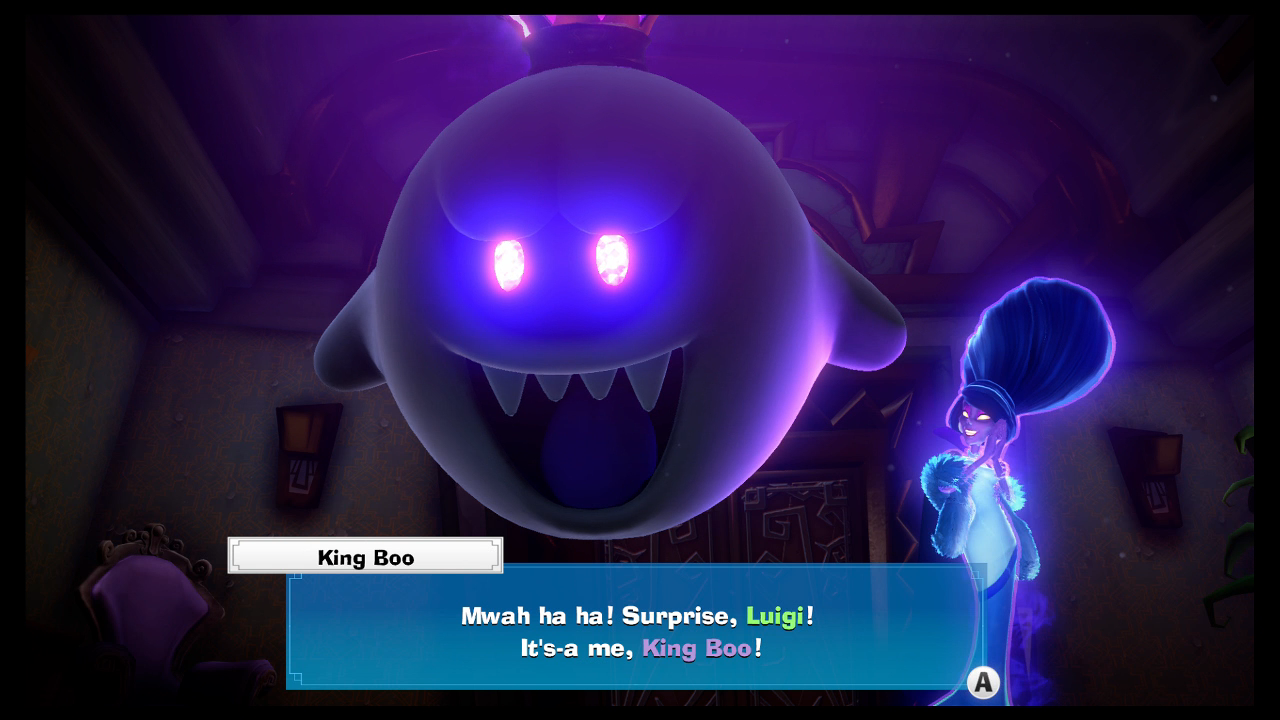 The World’s Most Obvious Trap

One of Luigi’s Mansion 3’s biggest weakness is the story. Most of the narrative feels like a recycled story from Luigi’s Mansion: Dark Moon. Mario, Luigi, Peach, and a pair of Toads have ventured into a hotel called Last Resort. After receiving an invitation from the hotel’s owner Hellen Gravely and smitten with the hotel’s extravagant food and decore everyone decides to turn in early. Quickly, the hotel shows its true colors and becomes a haunted house. Luigi finds out that King Boo has escaped and orchestrated this plan to take revenge against Luigi. After escaping King Boo’s grasp Luigi begins his journey to rescue everyone and capture hundreds of ghosts. 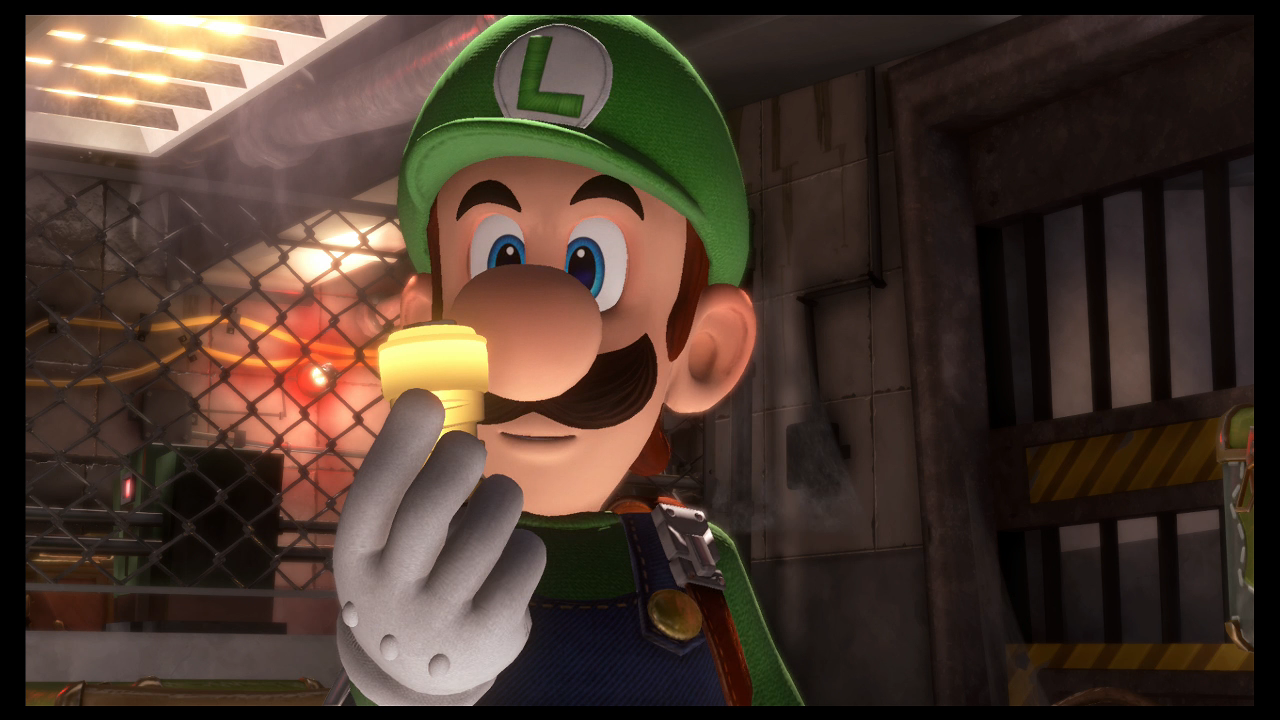 Luigi may be a coward but when his friends and family are in danger he’ll step up. Armed with his Poltergust, flashlight, and desire to loot everything valuable Luigi sets off to face the ghosts throughout the hotel. The game starts slowly with a general hotel environment then starts to introduce unique levels. With the exception of the 1st, 2nd, 5th, and 2 basements each floor has a unique theme and boss encounter. Some of the levels are larger than others, with some only consisting of a 1 room and a boss room. But taken as a whole the game’s 8-hour adventure offers more than enough variety in terms of level design.

There’s a fitness area, pirate level, and much more. Each one has dozens of ghosts and the occasional puzzles to solve. The stages end with a unique boss encounter that fits the area’s theme. Luigi’s goal is always to collect an elevator button so he can reach the next level, eventually making it to the 15th floor and saving everyone. To do this Luigi will have to hunt down the ghosts with the buttons expose their weak point using his flashlight, drain the ghost health, and suck them into his Poltergust.

Much of the core concepts remain the same. Luigi using his flashlight’s flash to expose a weakpoint and sucking up the ghost still uses the same tug-of-war method. A new skill Luigi has is the ability to slam ghosts into the ground, causing major damage and could be used to hurt surrounding ghosts. Another new ability, or ally, is Gooigi. This slime copy of Luigi is immortal and cannot be killed but must retreat into Luigi’s container if all his health is drained or he steps into the water. Gooigi can slip through bars and move through spikes, he’s also great for combat. Gooigi is excellently used for a variety of puzzles and combat situations. If you want a partner, a second player can join in as Gooigi.

Many of the puzzles and combat situations in Luigi’s Mansion 3 are pretty simple. Some of the puzzles require critical thinking and using a variety of items but most of the time all you need to do is look at the map for an opening, use your tools, or just interact with everything. The puzzles involving Gooigi are very clever though, with the developers taking advantage of the slime’s immortality and ability to slip through bars. If needed E. Gadd can provide a tip but these are usually worthless. However, his mode of communication is hilarious, using a Virtual Boy this time around complete with the Red and Black interface the system was infamous for.

The common ghosts variety is limited but the developers did a great job of incorporating them into different situations. Sometimes wearing flashlight protecting armor and gear, interacting with the environment in unique ways, or having them act in funny ways. The diverse levels are largely the reason fighting the same ghosts doesn’t get too tedious.

The adventure does lack optional tasks and replayability. You can return to older areas to look for Boos, hidden Gems, and collect treasure. There’s a ranking system to determine your performance but its unclear if it’s determined by time, treasure collected, or both. However, the 8-10 hour adventure was well worth the journey. I even went back to play it a third time just because it was so much fun. 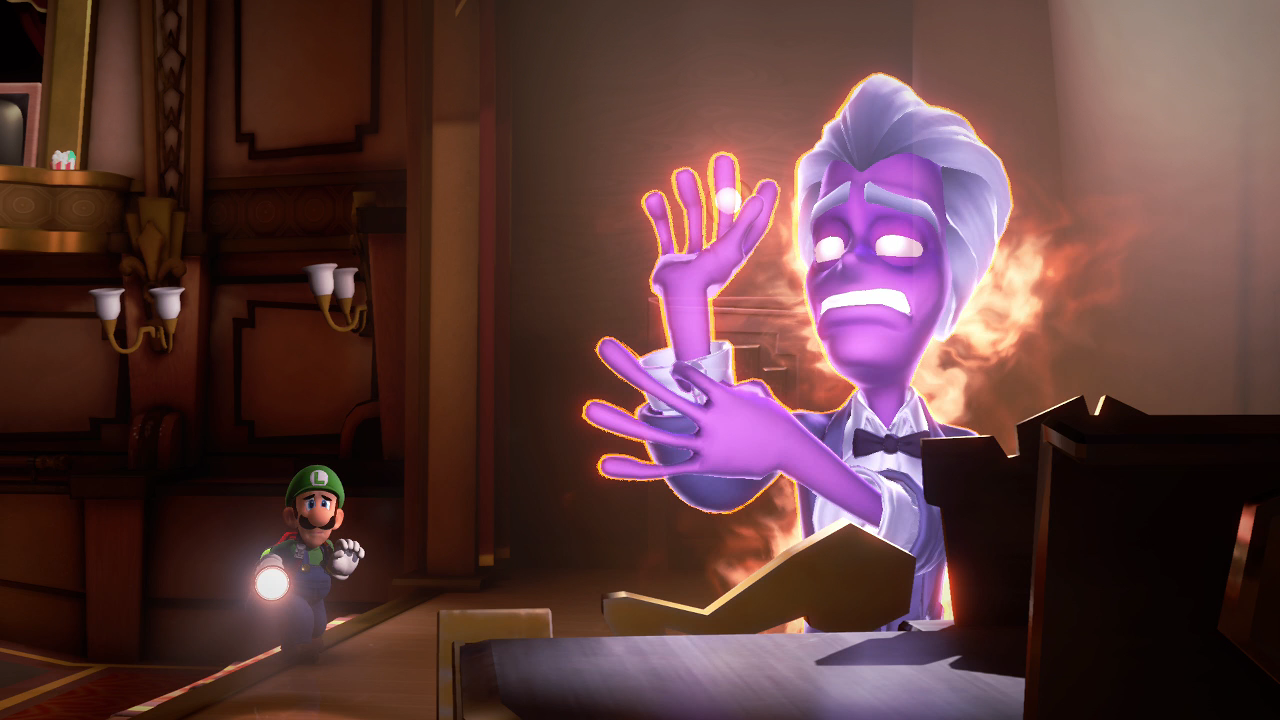 Controlling Luigi is pretty easy. The issue comes when trying to aim. When top-down the game’s aiming either aim’s Luigi based on where you’re walking or how far you turn the right joystick. It can become frustrating during top-down situations. Especially during the pirate level boss fight. But overall, the controls work effectively.

A major issue I did have was the lack of a dedicated run button. Luigi can sprint but only have walking for a certain amount of distance. Which can be annoying when trying to avoid an attack. 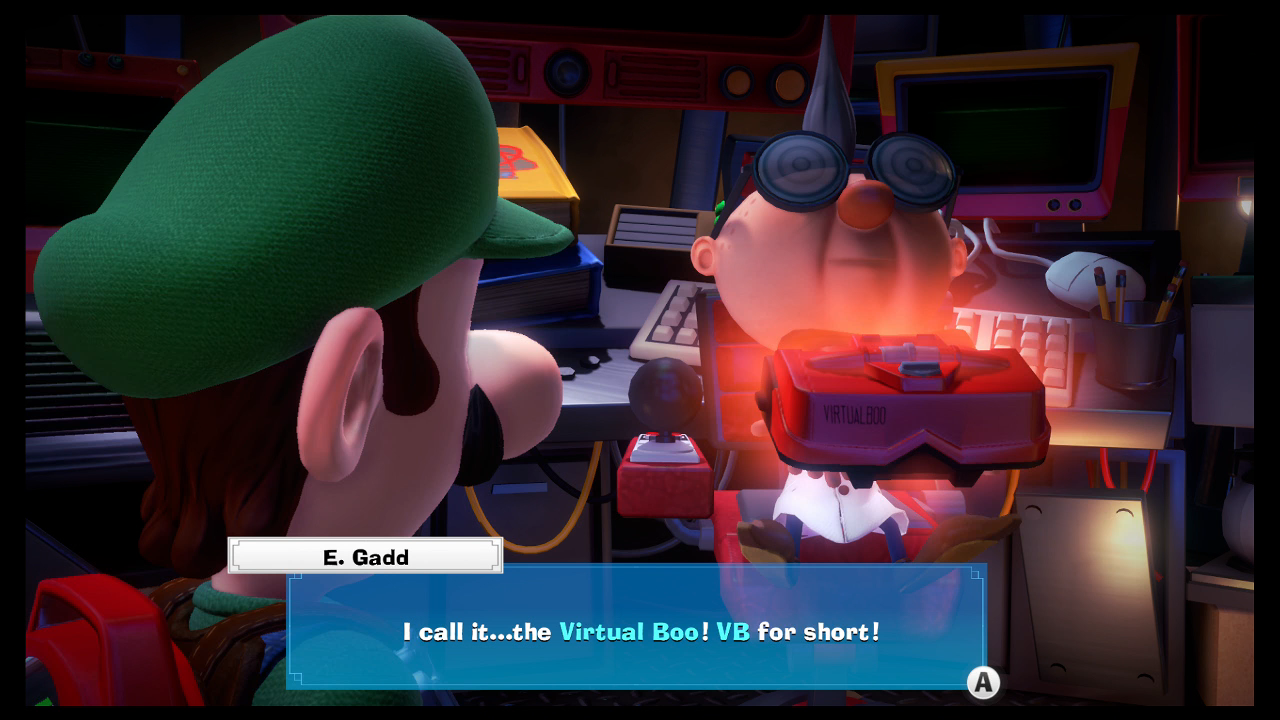 Much of Luigi’s Mansion 3 has little to no actual spoken words. Instead, the developers used body language as a way to convey the different emotions the various characters and enemies are feeling. This is amazing, as you can see everything has been animated with detail. Luigi will look at things that he’s uncertain of, instantly become alert when scared, and even dash through doors when running.

The same goes for enemies. With entire sentences being spoken through the character’s animations. The graphics and visuals are also outstanding. With details in everything from the chairs to Luigi’s L on his hat. 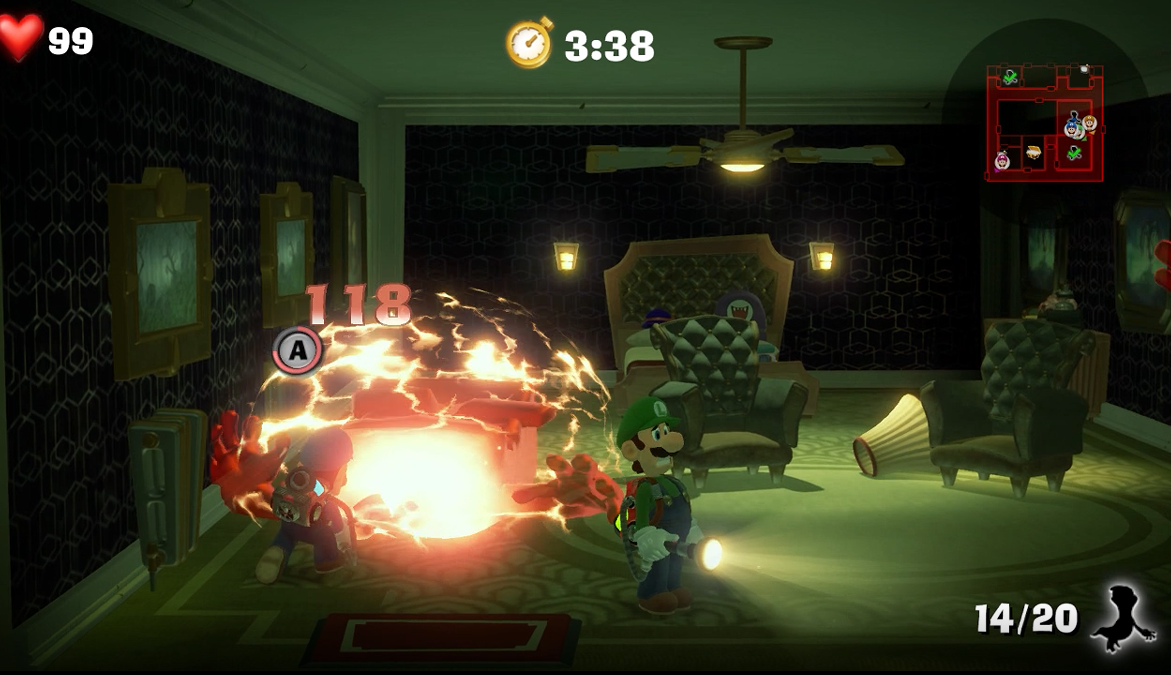 The multiplayer is pretty surprising. While it does borrow a lot of elements from Luigi’s Mansion: Dark Moon the mode’s core mechanics are still entertaining. Up to 8 players, online or local, travel through a series of floors in the ScareScraper. Each floor has different objectives such as hunt all the ghosts, obtain a certain amount of money, or rescue all the Toads. It’s pretty challenging, especially on the later floors.

The multiplayer also doesn’t provide a handicap if you don’t have a full team. You’re given the same time limit regardless of team size. And enemies act with the same level of aggression. There are powerups to aid in this mode but there’s no progression system. Meaning that the mode’s appeal will only last as long as you want. 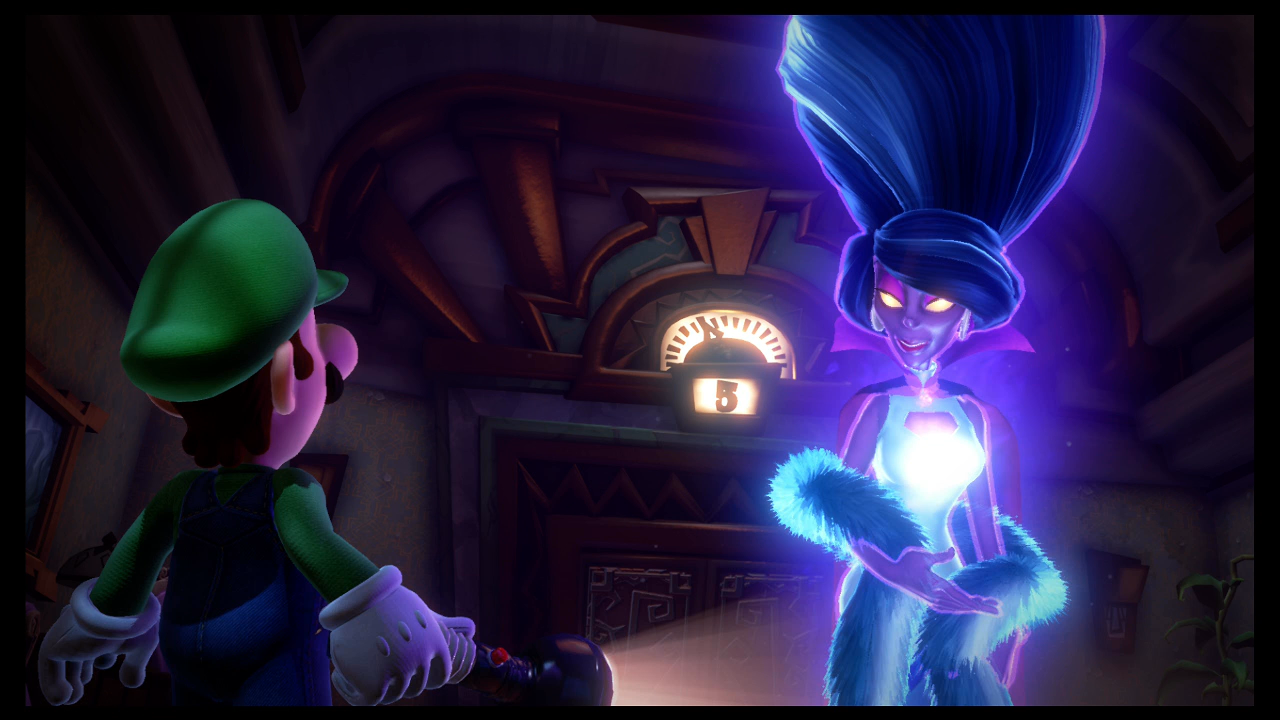 Luigi’s Mansion 3 is an extensively entertaining adventure full of incredible levels and boss battles. The multiplayer adds more life to this already extensive title and the single-player campaign is well worth the price. It’s not the most challenging game but the charming gameplay and diverse variety of levels more than makes up for its shortcomings. Luigi’s Mansion 3 is another amazing exclusive in the Nintendo Switch’s growing library of exclusive games. I just hope we won’t have to wait a decade for another game in this underrated franchise.