Ah, to be a kid again. Sneaking out late at night, living off of energy bars, watching my friends be dragged off by mind-controlled adults. The Blackout Club follows the general plot of a group of kids forming together to stop an evil group known as Chorus, who has unleashed some evil entity know as The Shape. Chorus has taken over the minds of every adult in town and is systematically trying to reach the children as well.

The Blackout Club formed because the kids noticed they would sometimes wake up covered in mud and cuts but would have no idea how they appeared there. Worse yet they would sometimes lose entire days from their memories. All of that has some tie into Chorus and the Shape. The goal of the entire plot of the game is to document as much evidence as the group can, showing what happened and hoping to find their lost friend who is taken at the beginning of the game. 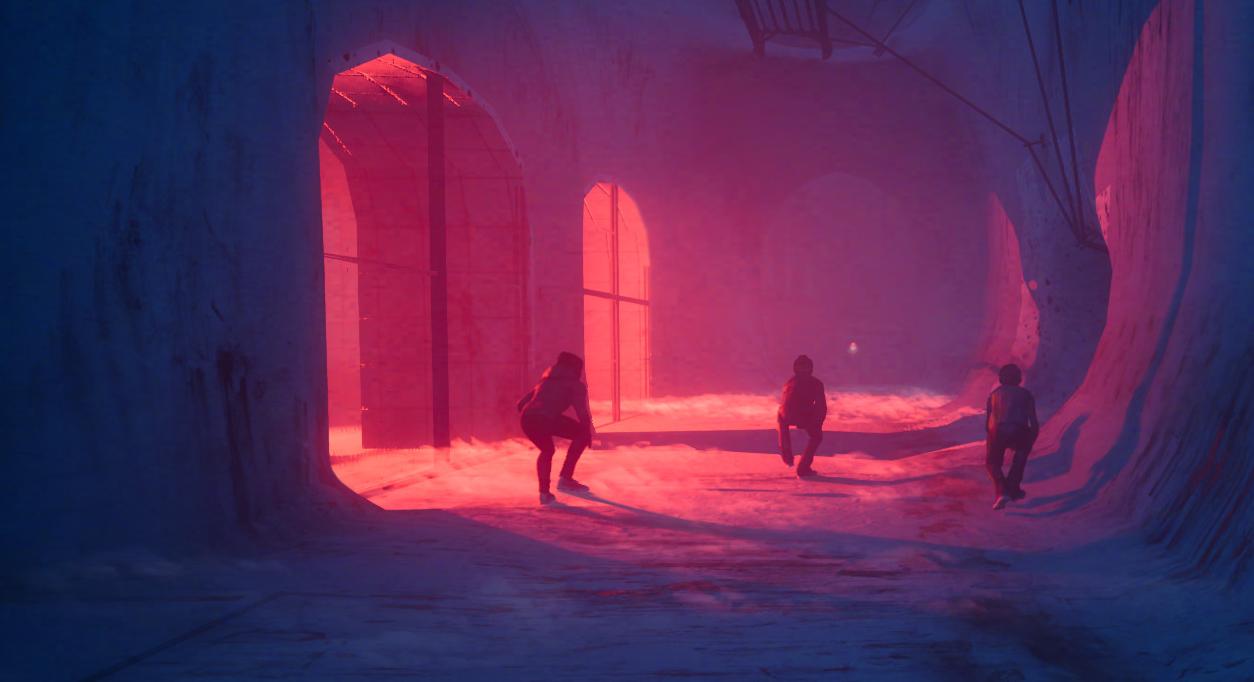 The Blackout Club has a heavy emphasis on being as stealthy as possible. The team manages to create a believable suburban town but also gives it this incredibly palpable feeling of despair and dread about it. It is eerily discomforting to walk around a vacant town or creep around on roofs to the abandoned area. It gets even more unnerving when you unknowingly go around the corner and almost slam into an enemy you didn’t hear.

It is imperative to try to plan out your every move and it is so rewarding to figure out your own ways to move around the town unnoticed. As the game progresses enemy forces escalate around the town. Drones are deployed around the area that will sit in place and routinely scan the area.

If players are seen by them or any cameras in the area they have a brief window of time to get out of the line of sight or risk summoning The Shape. Special trap doors are scattered around the map as well, they don’t drop as soon as the player touches them but it does alert The Shape to where the player is and has an effect to the player’s screen for a short time. It’s a pretty obvious door but if you’re running along a fence or rooftop and drop off without looking for it or are already legging it away from something it can exacerbate the matter at hand. 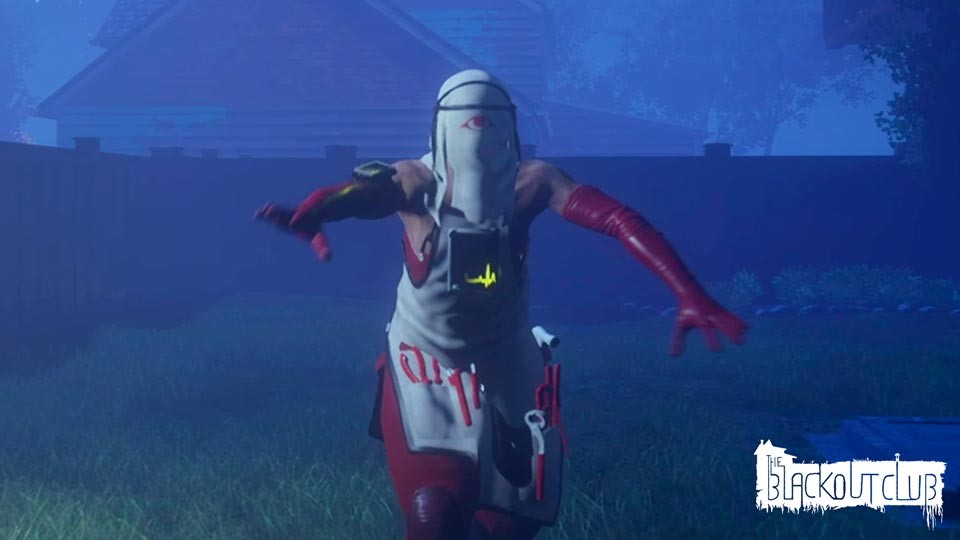 The Blackout Club handles cooperative horror exceptionally well. Typically the more players you add to a game the less scary it gets, this time around it can make all the difference. When more players are in the lobby new gameplay mechanics are introduced such as getting players back on The Blackout Club’s side. If a player gets captured they get converted to Chorus operatives.

Other players have the chance to snap their friends out of it if they can get over to them. When you get caught in single player it’s game over for the most part. In a more recent update, players will get dragged away by enemies and if they hit a certain point much like when Ashley is captured in Resident Evil 4 it’s mission failure. Unlike Ashley though, as players are being dragged to the door they can grab items from nearby trash piles, or if it is charged using their taser to getaway. 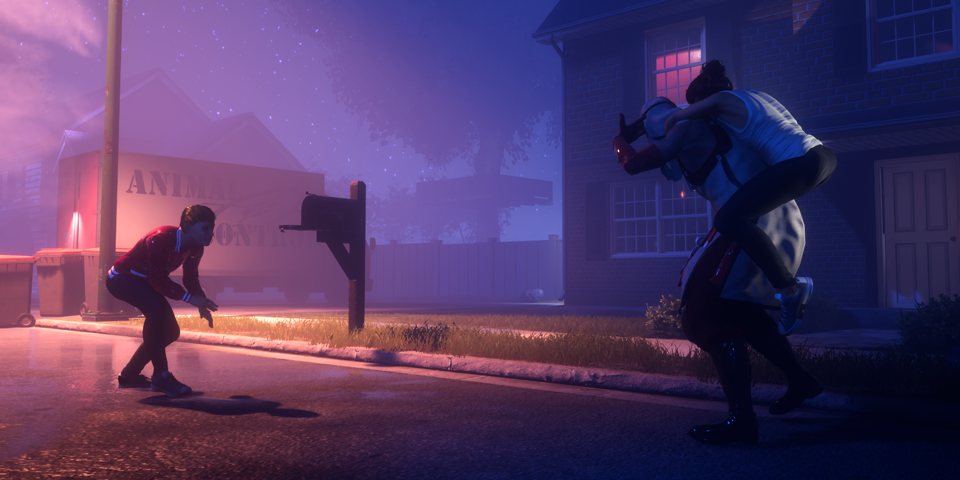 The gadgets are some of what make The Blackout Club so enjoyable. They’re incredibly enjoyable and are pretty outside the box from most games. Yes, there is simple stuff like flashbangs, which I’m not sure how kids got their hands on, but there are foam grenades, grappling hooks, knockout crossbows and so much more for the kids to use to their advantage.

The foam grenade grew to be my favorite, even if I had a hard time finding it after a certain level. It is incredibly versatile, it can be used to deafen falls or, my favorite, it can cover a door and make breaking through it quiet. It can also disable enemy traps. They have a sort of pulsing sound field that will alert nearby enemies if players run or walk through it, but if a player covers the trap in foam, or just sneaks up and disables it, voila. No more trap to worry about.

As the player levels up and fills in their skill tree they can choose to start with useful items such as lock picks, energy bars, bandages and more. They can also learn skills like the takedown which allows players to grab on to unaware or stunned attackers and momentarily render them immobile. It used to knock them unconscious but due to the narrative and development changes that is no longer the case. Now it just sorts of forces the enemy down and they lay there for a bit before resuming searching for the player. 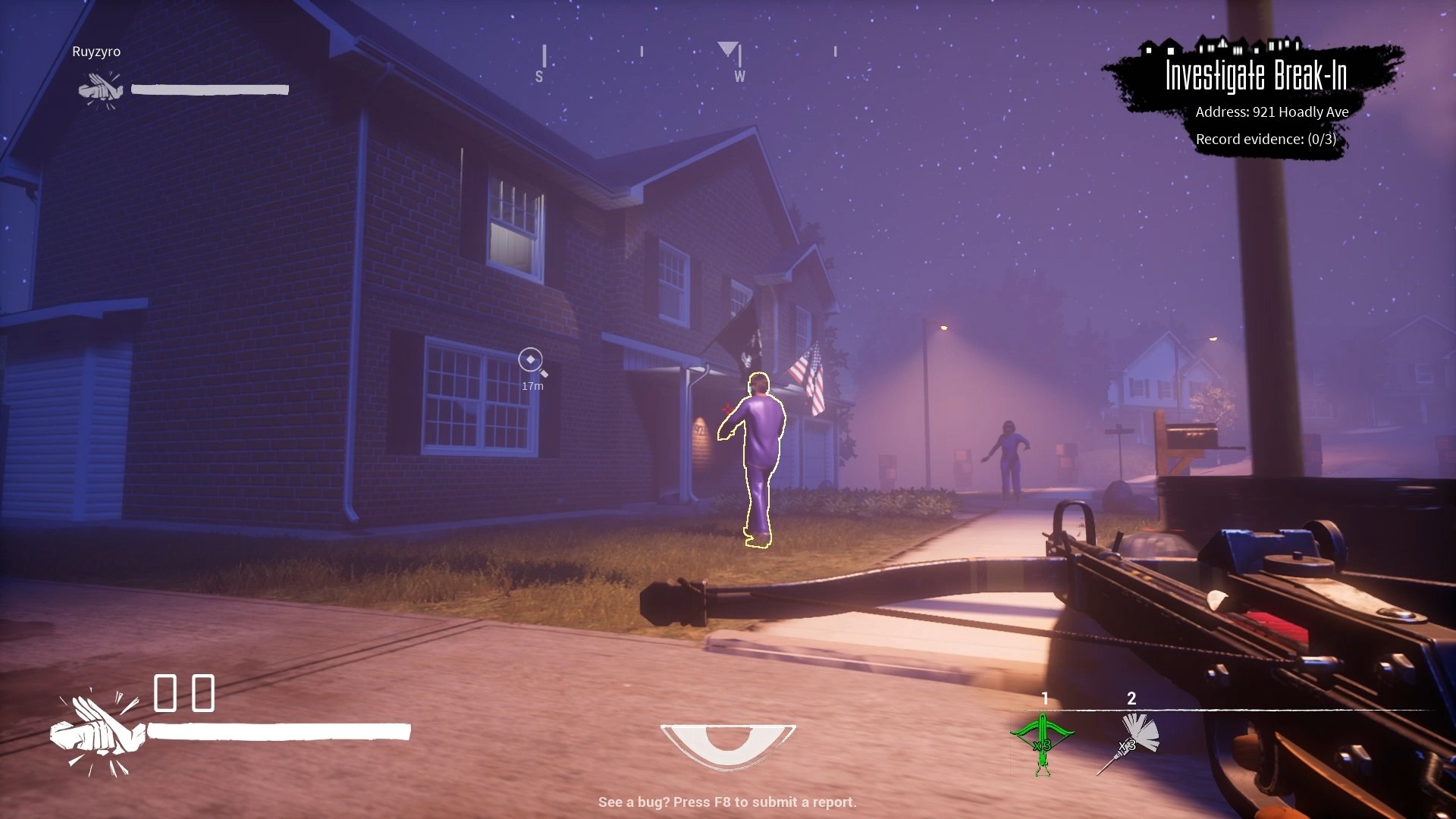 The major evil bad guy that shows up when The Blackout Club botches a mission is known as The Shape. It’s this massive entity that causes mission failure if it catches the last member of your team. The Shape can only be seen in a special vision mode every player has. So if they appear on the map, it’s best to distance yourself from nearby Shape spawns and look for it. Make your terrain traversal as complicated as possible so it has a hard time keeping up with you. If you happen to be in the Chorus headquarters The Shape doesn’t seem to be able to get on ladders the player is on. So feel free to cheese it and hid there, as long as the other enemies don’t find you.

Speaking of the other enemies the developers of The Blackout Club did a fantastic job constructing not only a believable first encounter enemy but adding more in as the game progresses. The first few maps the kids just need to work around various adult neighbors. All of them can’t see the kids but can hear when the kids get too close or make noises that are too loud.

The next enemy introduced is similar to the adults in the manner of not being able to see them but they are way stronger and harder to sneak around. They are Chorus operatives dressed in intimidating garb that sort of makes them look like a cult from Silent Hill. The next enemy introduced to track the kids very well and seem to be able to summon the shape as soon as they find the kids making them incredibly formidable. 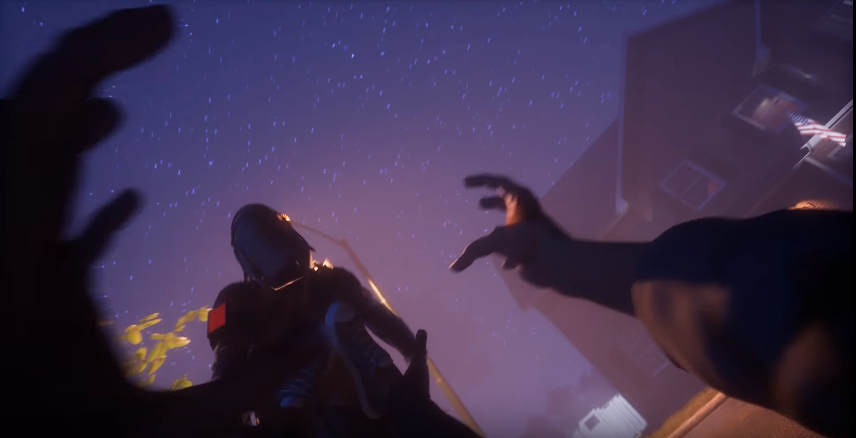 There isn’t a ton to dislike about The Blackout Club. The randomly generated levels and objectives tend to work out well. After it’s most recent update the mechanic that randomly generates the in level traps rarely spawns them in locations that prevent the player from progressing. Which is great because it made the level I was working on incredibly difficult for a while. I was tasked with applying these giant deafening devices on some of the giant chords in the Chorus base.

These giant chords tie in to the mind control of local adults and up until my most recent update to the game and reset of the level I hadn’t been able to do it because the algorithm to the game would spawn one of those sound beacons too close to the entrance to the level or right in the hallway before entering the Chorus base. Any attempt to disarm them was met with the device going off before I could reach the center and disarm it.

I also had an issue where I could easily fool The Shape and most enemies just by legging it to a moving truck on the street and climbing on top of it. The enemies would just circle the truck or stand there and look at me for a time before leaving. Nothing absolutely game-breaking happened which was nice. 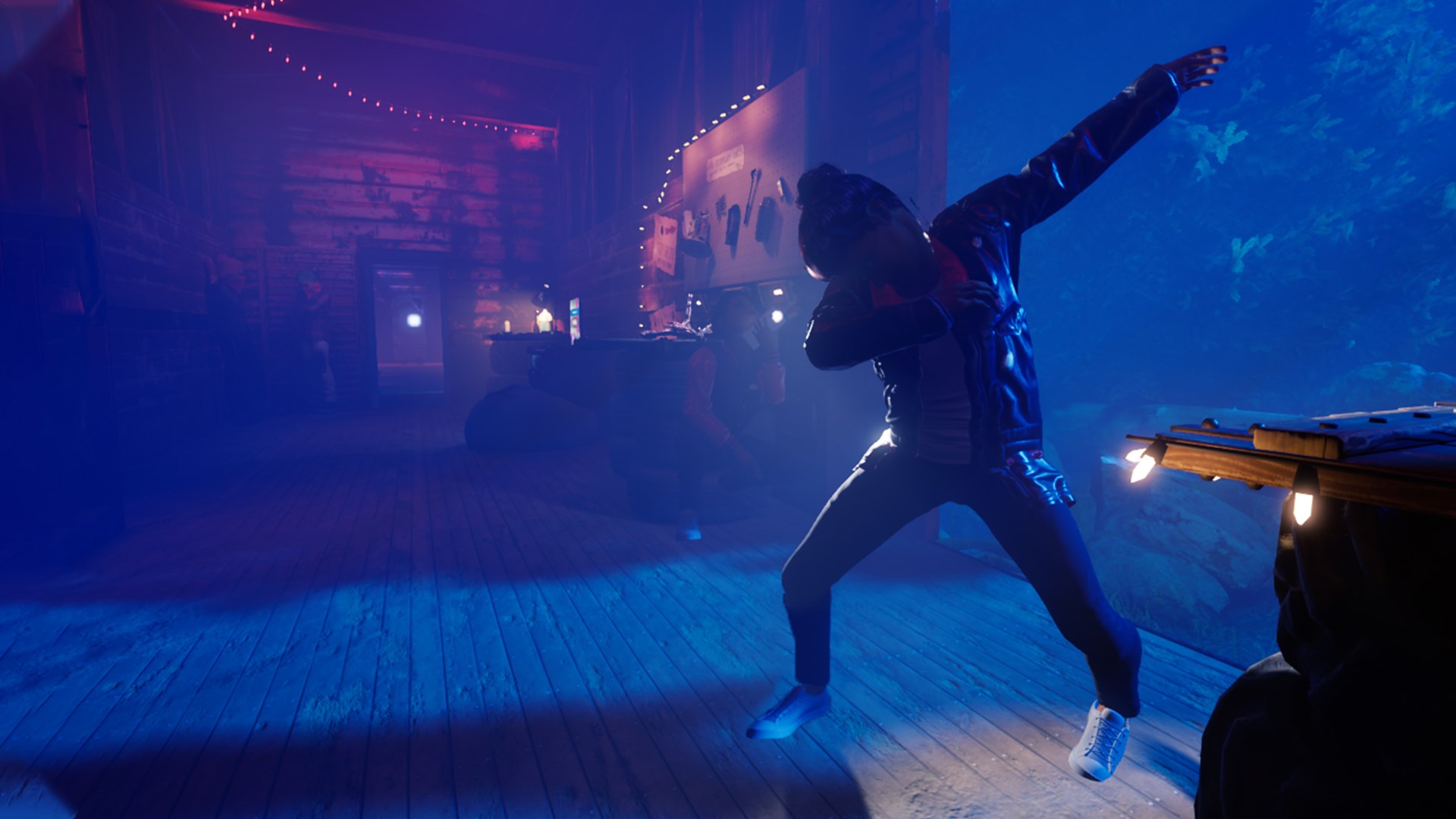 The team behind The Blackout Club cares a great deal about this game and as someone who has played it since it was in early access, it is nice to see the level of care and polish added to it over the time it spent available to players.

The Blackout Club is a superb cooperative or single-player experience that brings a breath of fresh air to the horror genre. The gameplay doesn’t ever feel stale or innervating to the point of wanting to quit. It maintains the atmosphere and the aspects of what makes it tense throughout the entire game. It is arguably one of the best indie games to come out of 2019.