It has officially been a week since EVO and while most of the excitement has worn down, one match up still excites me, GO1 versus SonicFox. To understand why this win was so exciting I think there needs to be a little history lesson on who both of these players are.

Their rivalry has been boiling down to this point for years. SonicFox has been a media darling since he started the FFG circuit when he was 13. We’ve heard him say, ”I’m gay, black, and a furry…” for years in tweets and interviews. We love him. He has been winning fighting games at competitions for years end on end and there has only been one man that can even come close to his talent.

That man is Goichi “GO1” Kishida. 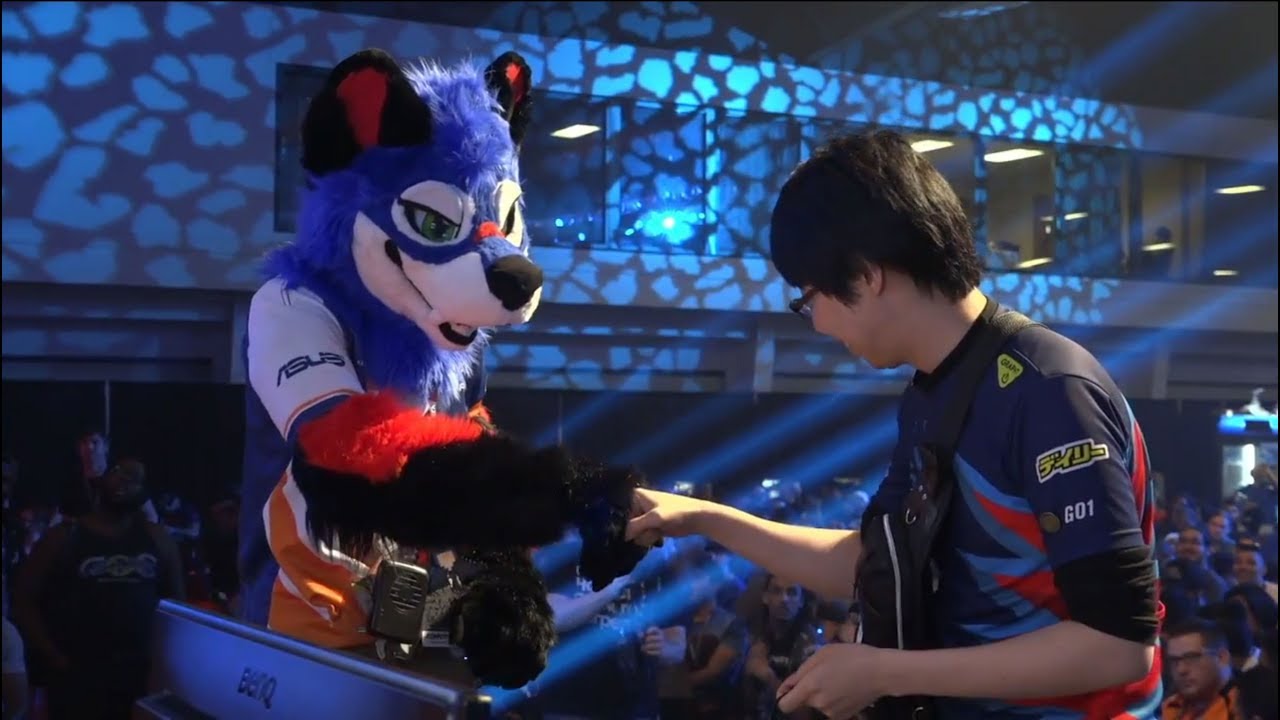 Goichi “GO1” Kishida is a Japanese fighting game competitor currently representing CYCLOPS athlete gaming. He is, like SonicFox, also known for being a top player in a variety of 2D fighting game franchises, such as Street Fighter, Guilty Gear, Blazblue, King of Fighters and most recently,  DragonBall FighterZ.

GO1 (Goichi) is also widely considered the best in anime fighters such as Melty Blood, Dengeki Bunko: Fighting Climax, and Aquapazza: Aquaplus Dream Match. He wins in those competitions way more than he loses. However, the circuit for that is widely unknown. At least compared to Dragon Ball FighterZ.

When I say that GO1 excels at defense, I mean that he can block almost any move thrown at him. He is a demon blocker! That isn’t to count out his combo execution and maintaining relentless pressure because he can juggle players for an entire match.

The best advice given to any player that finds themselves up again GO1 is, ‘Don’t get hit’ cause you will never again touch the floor.

It wasn’t just anime fighter games that GO1 was good at though. In Street Fighter V, GO1 didn’t falter to pick up Chun-Li and Menat as his main characters. Those character’s strengths seem to just compliment his play style and allowed him to have the upper hand when it comes to character match-ups. 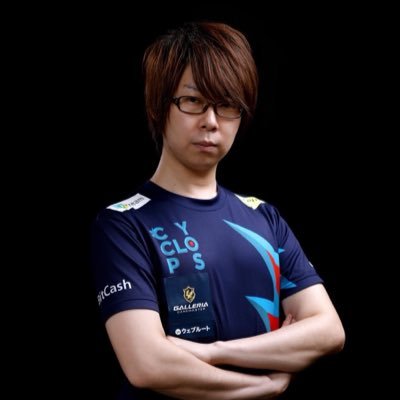 As many of you know, after its announcement, Dragon Ball FighterZ was met with amazing enthusiasm from fans of both the fighting games and the show. Our first reaction was that DBFZ  has the potential to be the next big competitive fighting game.

The game gained so much praise regarding its art design and animation. Bandai Namco showed fans they were being as faithful to the source material as possible while respecting its fighting mechanics. A playable demo was available at the Evolution Championship Series (EVO) 2017, where pros were able to get their hands on the title for a small tournament, in which SonicFox won.

Players had eight hours to practice the game (since it wasn’t even released to the public yet) and then SonixFox comes out there and wreaks havoc.

However, in 2018, GO1 decided to throw his hat into the arena. He quickly rose through the ranks and became known as the best Dragon Ball FighterZ player in the world, being almost unbeatable in tournaments during the early stages of the game. I say ‘almost unbeatable’ because everyone, except Dominique “SonicFox” McLean, still could get the better of him.

Coming into EVO 2018, DBFZ was actually the most signed up for tournament at the event. Everyone from all over wanted to say they were the best at this mostly new game.

To attest to SonicFox’s skill level, despite focusing on Dragon Ball for most of the year, he was still able to achieve 3rd place in the Injustice 2 tournament (losing to Tweedy in the Losers Final). But his attention would fully shift to the next tournament in his attempt to win DBFZ in its debut year at EVO.

It’s no surprise that SonicFox made it to the Winners Finals where he faced GO1 in an amazingly intense game. SonicFox beat him 3-0 to secure a place in the Grand-Final, only to meet GO1 once again after GO1 fought his way up from the losers bracket.

After GO1 won his first set and reset the bracket SonicFox requested to switch sides. This was such a weird request at the time and still to this day people talk about it. In compliance to the tournament rules, EVO let them switch sides.

SonicFox then, to everyone’s surprise, beat GO1 3-0 to win an unprecedented 4th EVO championship and become an FGC legend on one of the biggest stages in EVO History. 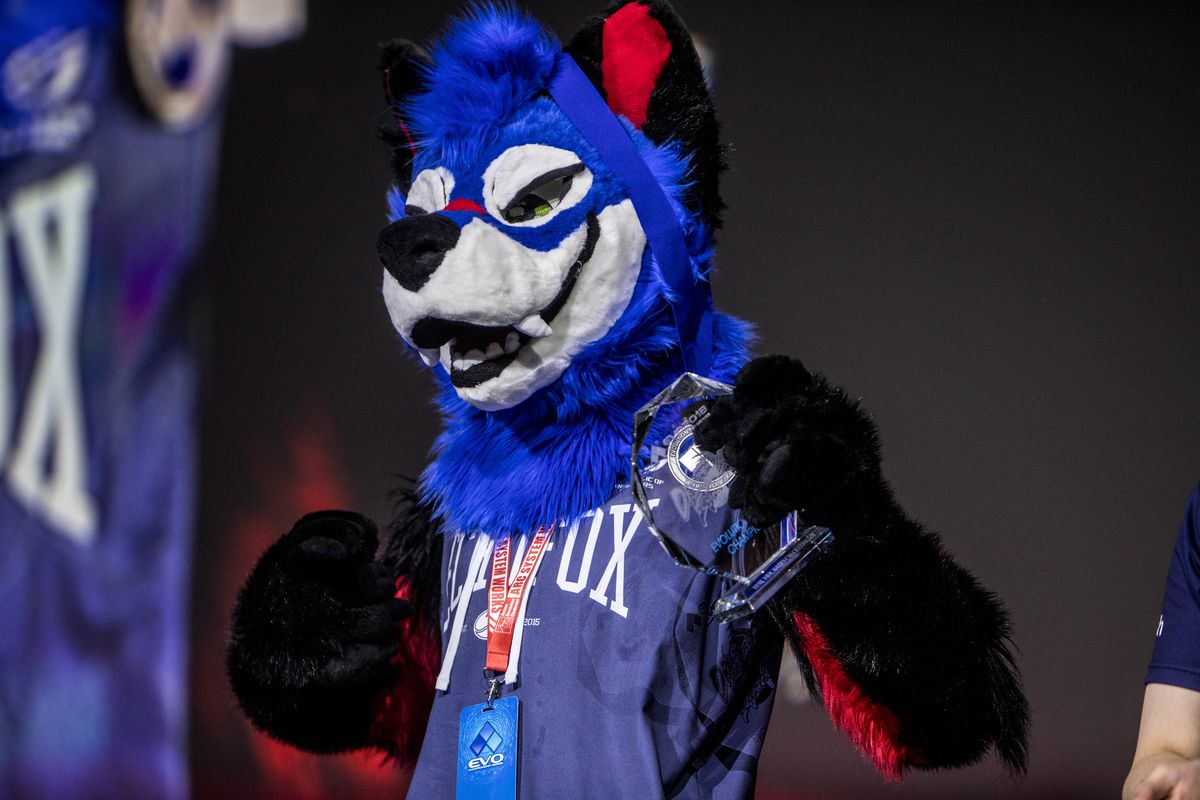 Dragon Ball FighterZ is kind of in a different place than it was in 2018, especially when it comes to the Evolution Championship Series. Some say that the shine has worn off the game a bit due to various factors, and attendance (of competitors) dropped considerably compared to 2018.

However, all of that ‘outside chatter’ fell away as soon as the EVO 2019 finalists took their place on stage.

It was so apparent that much of the fighting game community was anticipating to see a rematch of SonicFox and GO1. We all were. You could feel the energy while they were on stage this year. Obviously, we all got our wish when both players qualified for the finals without any losses going into the top 8!

The very first match up are these two heavy hitters. GO1 and Sonicfox take it to the absolute last character with the absolute last hit on a 2-2 match. GO1’s SSJGoku fakes out SonicFox’s Kid Goku and the celebration is so high and the yelling and screaming could, I’m sure, be heard outside the convention center.

I would like to make it clear that doesn’t mean the rest of the loser’s bracket wasn’t full of amazing fighters. SonicFox was up against some real heavy hitters.

Dragon Ball FighterZ World Tour champion Ryota “Kazunoko” Inoue made it to the finals in the losers bracket, even if he was eliminated by Shoji “Fenritti” Sho. Meanwhile, Joan “Shanks” Namay of Spain carried the weight of all of Europe on his shoulders, managing to defeat both Christopher “NYChrisG” Gonzalez and Hirohiro en route to the semi-finals. That said, it would be Fenritti that advanced to a losers finals match, but he too fell to SonicFox despite at one point going up 2-1 against the previous champion. 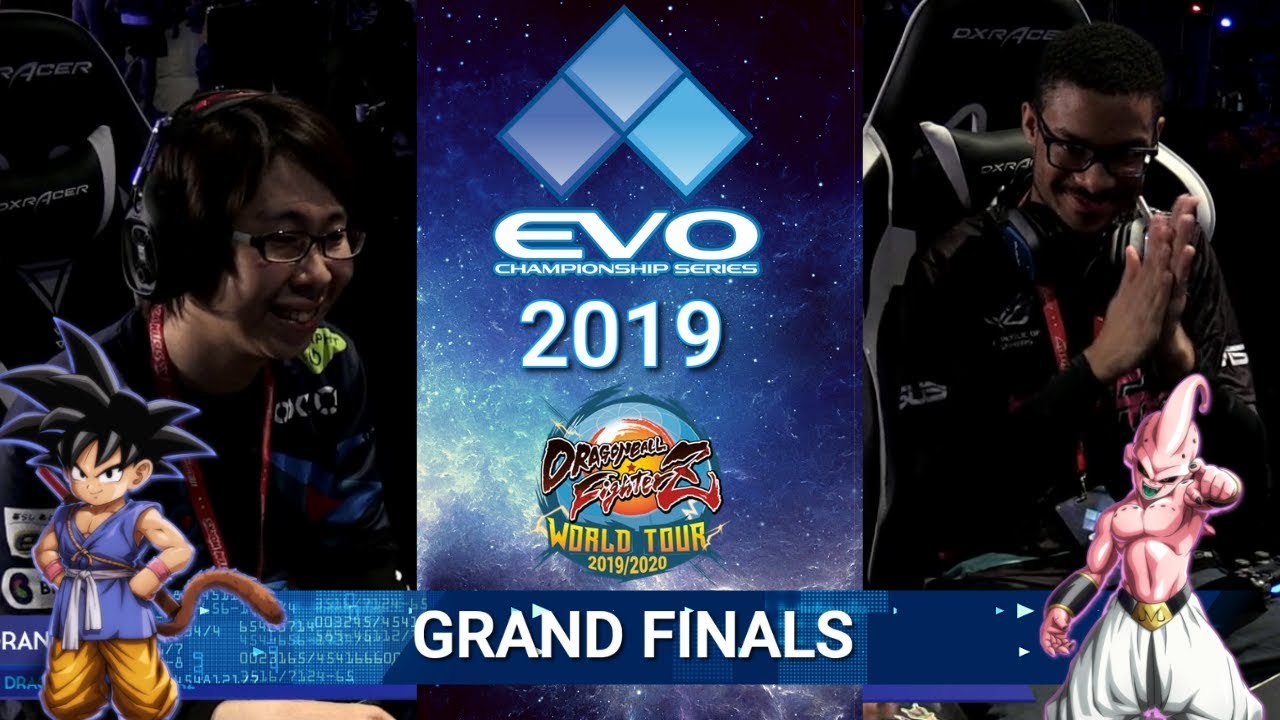 If 2018’s Dragon Ball FighterZ championship was like a glorious DBZ finale, Evo 2019’s grand finals were the rerun you can’t help but watch again. There’s just something amazingly special about watching a SonicFox vs. GO1 match.

Of course, they didn’t disappoint when it came to their final match of the tournament. Let me explain something real quick, there was no favorite; the crowd roared equally as loud for both players, only interested in seeing what the best Dragon Ball FighterZ competitors in the world could do when facing each other again.

It was like a scene in the old west on a dirt road with the clock striking noon and we were all watching.

It was intense! SonicFox seemed to plow through and was up 2-0 and looked poised to reset the bracket, but GO1 refused to lose. After making some crucial adjustments in his approach, GO1 won games three and four to send the Grand Finals to a final game. Previously, the games had been a matter of slight edges, however, a dropped combo by SonicFox that led to a wasted Level 1 Sparking proved pivotal in GO1’s victory in the final game and subsequent championship!

Despite losing, SonicFox had a huge grin fixed on his face and was overcome by belly laughs as he helped a sobbing GO1 face the crowd. You couldn’t help but watch as GO1 wins and immediately breaks down in tears and happy sobs. SonicFox smiling and patting him and seemingly congratulating him over and over.

The two then stand together, with SonicFox holding GO1’s hand high in victory. It’s an incredibly emotional moment for both players and for the crowd that loved watching these two.This was especially a great win for GO1 because he was suffering from hand injuries before the event, however, he was still able to lift the trophy moments later.

Watch this tweeted-out video by HighFightTH to show you the excitement we all felt. What took me this long to try an explain was summed up in this 2:20 min video.it will definitely tickle your heartstrings. Enjoy.

It’s moments like these that should make us all proud to be a part of the gaming community. This rivalry is based off a wonderful dynamic. Two people (friends) that bring out the best in one another. It is what we should all be doing. There were so many people of all backgrounds, races, religions, gender, and sexuality and we were all cheering together! Don’t let mainstream media distract you from how great a community gamers have. Just continue to be great.

Congratulations Goichi “GO1” Kishida! You deserved this win! We are all so proud of you. Dominique “SonicFox” McLean you always put up one hell of a fight and we are just as proud of you. Keep up the good work boys! 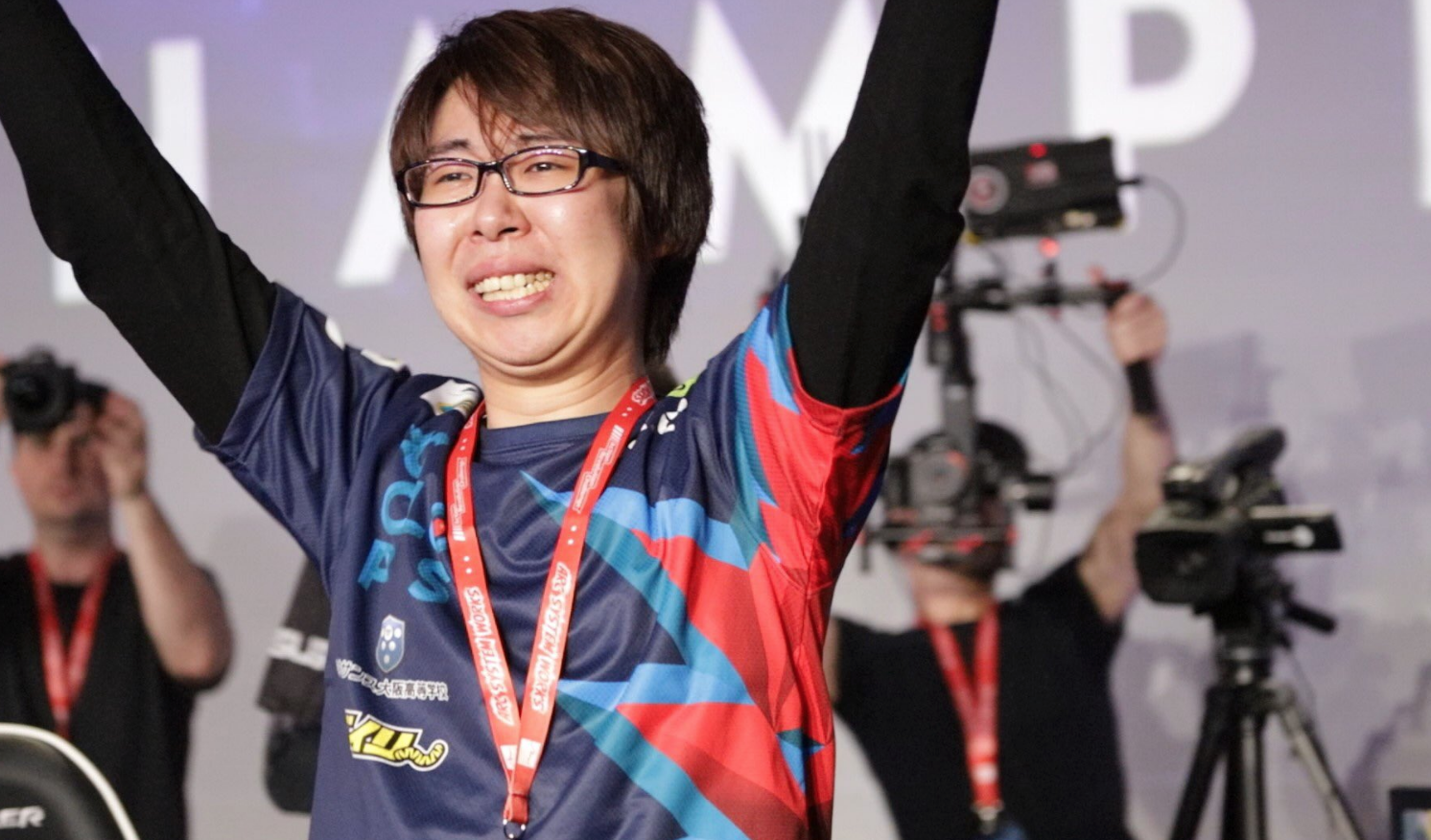