Before we can review this game I think some of you need to know what “Elo Hell” is actually referring to. “Elo Hell” is a slang term from most MOBA or competitive video games like League of Legends, Smite, Dota II, Overwatch, etc, where a player feels as though they are prevented from advancing through their bracket due to bad matchups or unskilled teammates.

Yes, sometimes, this is true, and knowing this term you will feel like your skill has nothing to do with it but it totally does also (something I also had to come to grips with). Now, a lot of players assume the Elo is an acronym, however, believe it or not, it’s actually the name of the physics professor, Arpad Elo. He was the one invented the ranking system for use in competitive chess but many modern video games’ matchmaking systems still use Elo’s math. While this is all incredibly fascinating, let’s actually talk about Elo Hello.

Tell Me A Story

Elo Hell is one of those games that seems like it is for a niche market. Exacto Games brings us a well-told story of Chance Betzinger. Chance, while a big MOBA gamer, wants desperately to embark upon a potential career as a professional player of the brand-new strategy MOBA game Echo Star (made up for Elo Hell).

So, Chance and his friends decide to spend some time climbing the ranks together to be apart of the esports scene. Esports do tend to be a team activity, so Chance’s relationships with his friends and fellow players play a major role in his path to the top. This is where the Visual Novel part really makes its presence known.

So like in many BioWare games if you chose an action there will be a consequence. For example, if you support your hilarious English pal Jeff, for example, he’ll actually be a solid source of backup in-game when you play Elo Hell. If you decide you’d rather hang out with Brian, the most useless person of the bunch because he doesn’t even know what a MOBA is going into the game, then Jeff won’t be as interested and your team play will suffer for it.

The most challenging part of the story for me is when Chance sits down to play Echo Star, like all of the other parts of the game, you (as Chance) actually play Echo Star! Exacto Games built two games in one here. Echo Star is a real-time strategy game with a few MOBA (multiplayer online battle arena) elements in it. Like if Age of Empire had a baby with Smite. The skill with which you play Echo Star determines the success or failure of Chance’s esports ambitions. 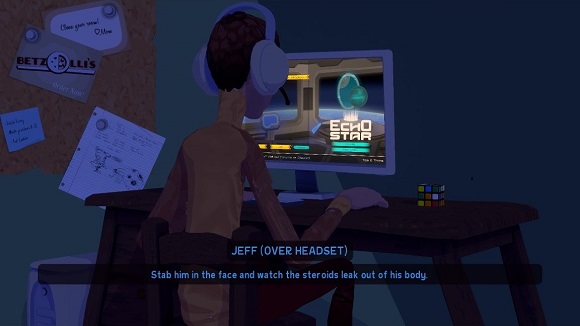 As someone who is 1000% awful at these games, I will tell you, honestly, Chance had no chance with me behind the helm. Sorry, Buddy.

The game presents itself as an esports comedy. It is intended to be both funny and a reasonably accurate representation of how it feels to try to go from nothing to professional in the 2018 esports scene. There are some great one-liners in this and unlike many nerd-centric comedies (that will remain unnamed), it is actually funny to gamers and the struggles they face, even if they aren’t trying to go pro. I found myself chuckling quite a bit.

Elo Hell isn’t all VN nor is it all Echo Star. They also threw in a whole bunch of mini-games into the story which also is not easy. I had my first taste of this back in PAX East, so, going into my full playthrough I thought I was ready. I was indeed wrong. This game is like the Dark Souls of minigames. They are actually challenging! More on the mini-games later.

So while, Elo Hell might seem simple in theory, but be prepared for an experience that will keep you engaged and focused from start to finish.

Try And Rise To The Top

Let me just state that the easiest part of the Elo Hell is the narrative. You have to be a total dolt to not pick the right choices in this game. However, having said that, the lines can sometimes be a little clunky but I truly believe that is part of the charm. Most of us are so awkward. We stammer outlines of our own, we say dumb things, or ask dumb questions. It’s a part of what makes us human. I can’t tell you if Exacto Games did this on purpose or not but I will assume they did because at heart we are all gamers that say dumb sh*t. It makes the characters a little more loveable too.

Outside the narrative that players will focus on in Elo Hell is the secondary theme of the game, Echo Star. Echo Star takes the extreme basics of how an RTS works and simplifies it in ways we’ve never seen before. Rather than controlling a team of units and gathering resources to build bases and troops, players will only ever make one base, take control of a singular unit—while the AI takes the rest over—and engage in battles that last literally 60 seconds. 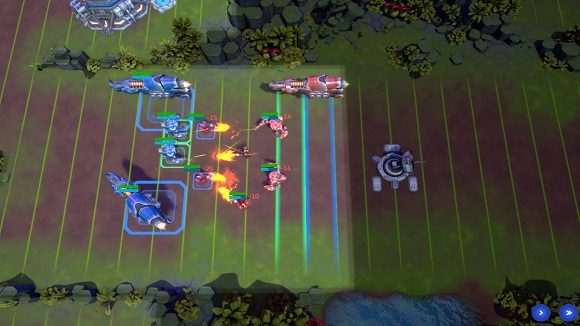 This allows even those with little RTS experience to enjoy Echo Star’s fights and aims to be just about killing enemies, getting points to build stronger units and then taking down the objective or enemy base. It might seem to be overly easy and simple but from the few battles I played on against the AI, we can see how it could become more difficult as the enemies get smarter and the chaos increases. As I said, I didn’t do very well. Hopefully, you will.

There are a few mini-games, as I mentioned before, in this narrative that keep you intrigued so as to not having to have Chance stammer through awkward dialogue. Although some of these can get as frustrating as a Mario Party game, they are still a lot of fun to play. My favorite of these is still the pizza mini-game. I’m horrible at it but it plays on gamer’s anxiety really well.

The set up to the pizza mini-game is pretty funny. Chance and Liz make a bet to see who can be the first one to raise money to buy a new gaming chair. They both have the sitcom idea to visit Chance’s Uncle who owns a pizza shop to ask for a job. He makes you compete for the job with a pizza making contest. I flubbed it so hard and Liz got the job. 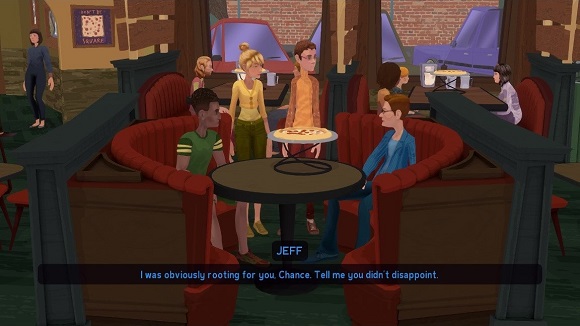 I would have loved to play the pizza game against a real person that had no idea what they were doing so Liz didn’t kick my ass so badly but I still had fun with it. There is another game before this that is a lead into the chair idea which is a DDR style, long gaming-session, butt cramping game. This I faired much better at than the pizza game so there was at least something there to make me feel like a champ.

Elo Hell is a fun and clever take on VNs that add more to the genre. The sitcom angle is a good one to have since most VNs revolve around romance. The mini-games are fun and challenging. Echo Star, while not a game I would typically play, has got me interested as to why I’m so bad at RTSs and MOBAs.

This game has a lot of heart and if you love Indie games this will be 100% up your alley. Also worth a try if you know the struggle of Elo Hell, love comedies, or want a pretty hilarious explanation on RTS MOBAs.