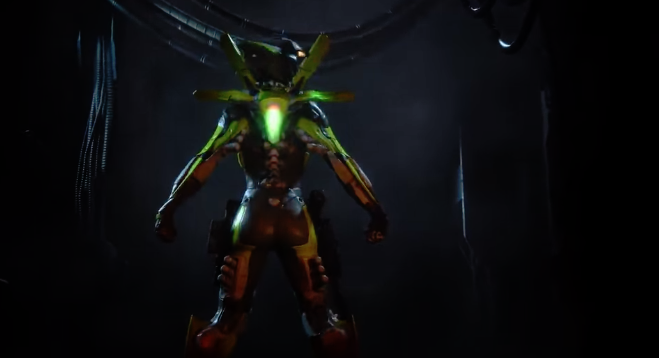 This update has been long-awaited since BioWare removed the road map for Anthem a few weeks ago. For many, despite releasing months ago, have moved on to other titles. Perhaps this new update will regain interest in the game but its unlikely.

New Story Missions – Track Dr. Harken and unravel the mystery of the Cataclysm. Available to all players who have completed the “Incursion” mission in the main storyline.

Cataclysm – Battle Vara Brom and her forces in a dangerous new game mode that evolves over time. Teamwork is heavily encouraged as you battle against the dangerous environment and time itself, unlock secrets, and master the Cataclysm to earn all new rewards and rank up the leaderboard. The Cataclysm is available on the Start of Expedition screen for all players who have completed the “Incursion” mission.

Inversions – Sets of gameplay modifiers that impact how you face the challenges of the Cataclysm.

Leaderboards – Finishing content in the Cataclysm mode adds to your score. Your score is updated to the leaderboard at the end of your run.

Seasonal Currency – Complete challenges and content to earn Minor and Major Crystals. Spend that currency on the rewards in the Seasonal Store.

Seasonal Store – A new store that features time-limited rewards for purchase with the seasonal currency.

Guild App – The Anthem guild app is now available for download. Create, join, and chat with guild members in-app. View your guild from the game to squad up and explore the world of Anthem together.

Inversions – With patch 1.3.0 we’ve introduced a new system called Inversions, which changes the way your Javelin interacts with the environment to various degrees. Some Inversions will hinder you, some will help. Ultimately, they should fundamentally change your experience within the Cataclysm and encourage some diversification to your playstyle. Here is a full list of the Inversions you can expect (two inversions will be active each week during the duration of the Cataclysm event):

Ultimate meter from kills is increased.

Killing an enemy restores a small amount of shields.

Heat build-up while hovering is decreased.

Defeating an enemy while hovering grants increased damage while on the ground for a short time; stacks up to 5 times.

Firing the last shot in a weapon’s clip increases all damage for a short time.

Stronghold Chests have been added to the end of each Legendary Contract.

Update 1.3.0 and the Cataclysm introduces us to some new powerful sources of energy for creatures in the world, gear, and of course weapons. As part of the Cataclysm we wanted to amp up our in-game weapons and add some unique spin to their behaviors and gameplay mechanics – With that in mind, we’ve introduced three new classes of weapons with three new Masterwork/Legendary only variants:

“Bad Omen” – Charges to fire a burst of energy projectiles.

“Lightning Rod” – Calls down lightning on a specific location.

“Flashfire” – Fires a lightning attack that jumps from enemy to enemy.

“Razorwing” – Launches a heavy blade that bounces between targets.

We’ve reduced the amount of health for non-boss enemies inside Grandmaster 2 by 50%, and Stronghold bosses by 65%.

Reduced the amount of shields for all enemies inside Grandmaster 2 by 35%.

Reduced the amount of health for non-boss enemies instead Grandmaster 3 by 50%, and Stronghold bosses by 75%.

Reduced the amount of shields for all enemies by 20%.

NOTE:  These health changes do not affect our “Apex” creatures, as they had previously been adjusted.

With this update, we’re starting to introduce additional Masterworks for each of the gear slots on each Javelin to better improve end-game build diversity and introduce new mechanics.

Combo Effect: Explosive. Detonates another explosion briefly after the first.

With update 1.3.0 you can finally complete the full set of Masterwork or Legendary gear. No more single lingering Epic Support Gear items ruining your complete collection! With this update, we’ve introduced two new Masterwork Support Gear pieces for each Javelin – centered around teamwork and buffing your allies as you fight your way through the Cataclysm.

Breaks you and allies free of all status effects. Additionally revives downed squad-mates who are nearby.

Locks onto a target, reducing their resistances and jumping to another target if defeated.  Also immediately marks additional enemies around the target.

Deploys a field that augments allies inside, increasing gun damage. In addition to gun damage, all damage is increased while inside the muster point.

Creates a wall of wind to block projectiles. Additionally, enemies take damage when they hit the wall.

With this update, we added a significant level of build diversity by changing one of the main ways that Javelins prime and detonate combos. To do this, we are introducing new melee gear pieces that are equippable, have stats, and change the way you play. This will allow you to assemble new gear combinations not previously possible. We’ve also introduced new Masterwork and Legendary versions of these items.

With this change we have also fundamentally changed the way that melee damage scales. Previously, melee damage started at a base value and then automatically increased in power based on the average gear score of the player. This had the effect of emulating an item of the average rarity and level for players, plus some average assumed inscription bonuses (and Masterwork effects if they are the appropriate level).  Now that melee is it’s own actual item, it no longer uses this automatic scaling, but uses actual real scaling for the item and the bonuses that occur on that item. This means that if players want to get their melee damage back to what it was, they need to get a melee weapon of the appropriate rarity with similar inscription rolls. However, because Melee is an actual item now, there is a much higher ceiling potential than there previously was, as our “assumed” inscription bonuses were in the middle of the possible bonus range. Some important additional notes:

We now include both melee damage bonus and weapon damage bonus as modifying melee weapon damage (not melee gear piece damage for Interceptors), so there are more total damage sources that boost your melee than previously existed. This should result in higher additive bonuses than were previously applied, which will help offset some of the lowered base damage.

In addition (based on PTS feedback and iteration), we have increased the base damage value of all melee gear by 50%. Increasing the base value is a multiplicative change.

Heavy glove that can be smashed into the ground, causing damage in a large area.

Heavy glove that can be smashed into the ground, causing damage in a large area. Sends out a shockwave that damages enemies in front of you.

Flaming glove that can be smashed into the ground, burning enemies in a large area.

Flaming glove that can be smashed into the ground, burning enemies in a large area. Cracks the earth, igniting flames around your feet that burn nearby enemies.

Double-bladed daggers that allow for fast attacks which can be chained together.

Double-bladed daggers that allow for fast attacks which can be chained together. Hitting an enemy grants 10% increased damage resistance for 10 seconds. Stacks to 5.

Double-bladed daggers that poison their target.

Double-bladed daggers that poison their target. Deals additional damage against enemies below 50% health.

Hits enemies with an explosive strike, dealing high damage. Sends out a fireball that seeks enemies.

Hits enemies with an electrically charged strike, shocking them.

Fixed a number of challenges that had the incorrect descriptions.

The door into the final boss room of The Sunken has been raised slightly in order to provide an easier step up to the frame around it once the door is closed.

The following legendary missions will now count for progress towards “Daily: Legendary Missions”:

Fixed an issue to allow players to replay Mysterious Beginnings from the End of Expedition screen.

Telling Dax to use cartography skills will now be properly recognized.

Fixed a number of issues that could cause a crash when in the forge.

Fixed a crash that could happen when swapping gear in the forge.

Fixed an issue where the gear score in the forge would be incorrect after swapping a piece of gear.

Removed the loading screen when leaving the forge at end of expedition. (Should now fade to black briefly).

Fixed the stats on some gear that were appearing incorrectly.

Fixed an issue that could cause the pilot’s javelin to not appear correctly after making appearance changes.

Fixed an issue that would cause a pilot’s javelin to not appear correctly in the launch bay.

Fix issue with being able to equip the wrong gear on javelins.

Edited a number of item descriptions for clearer understanding.

Fixed a number of animation issues that could occur to enemies in Temple of the Scar.

Fixed an issue where the Furies wouldn’t spawn in the Heart of Rage Stronghold.

Fixed an issue where damage was not registering when shooting weak spots on the Fury shield.

Fixed an issue in which Outlaw Outrage was using the incorrect encounter markers.

Damage dealt to nearby enemies when the Colossus lands from a tall height now scales correctly, so it maintains its usefulness at higher levels.

The Storm can now cancel its air melee with a double jump, just like the other Javelins can.

We fixed animations for the Emote Military Salute to reduce character sliding.

The Colossus will now utilize the same base values of Armor and Shields as the rest of the javelins, but has an inherent multiplying factor on all base values that generates the larger Armor and Shield pools. This change will better allow the Colossus to utilize Universal components without sacrificing an extraordinary amount of defense to do so.

Note: Because of this change, inside the forge, the base value of the Colossus specific components will go down significantly but the amount of armor added to the Colossus should remain roughly the same (since that lower base value is multiplied by the Colossus’s new inherent bonus).

Colossus now get a multiplicative bonus to Armor that increases all Armor granted by 475%.

Colossus now get a multiplicative bonus to Shields that increase all Shield granted by 237.5%.

Fixed an issue where the friends list would not show up when a player’s Origin status was set to invisible.

Showing the Map in an expedition now centers it on the current player position.

Library and Cortex entries can now be properly marked as read and persist upon closing the UI.

The Colossus component “Reinforced Hull” has been renamed to “High-Capacity Munitions” to better reflect its functionality.

The Colossus component “Grand Entrance” now triggers its explosion when falling from a shorter distance than before (the new distance is roughly equivalent to a double jump height).

Masterwork properties that apply a duration-based bonus (such as the bonus from the 10,000 Suns gear piece that increases all damage for a brief time) will still apply its bonus to Combos and Ultimates.

The damage value from Masterwork proc effects (such as Ralner’s Blaze or Thunderbolt of Yvenia) will now deal its damage based on the item level of the item that is proccing the effect, instead of the overall GearScore of the Javelin.

The following guns will now properly display their primer or detonator effect:

Fixed an issue in which Cryo Glaive and Absolute Zero could not fire its multiple charges if it was in the process of recharging.