It is always interesting to see the creators of television make the jump to the video game industry. In some cases, it works out and can spark a successful game with multiple entries into the series such as the creators of South Park ending up with both the Stick of Truth and The Fractured But Whole. In other instances, we can end up with horrendous tie ins reminiscent of Spiderman 3 and Superman for the Nintendo 64. Trover Saves The Universe is made by the co-creator of the hit show on Adult Swim Rick and Morty. Is it bad? Is it a success story, or does it fall into some weird grey area that is an amalgamation of the two? 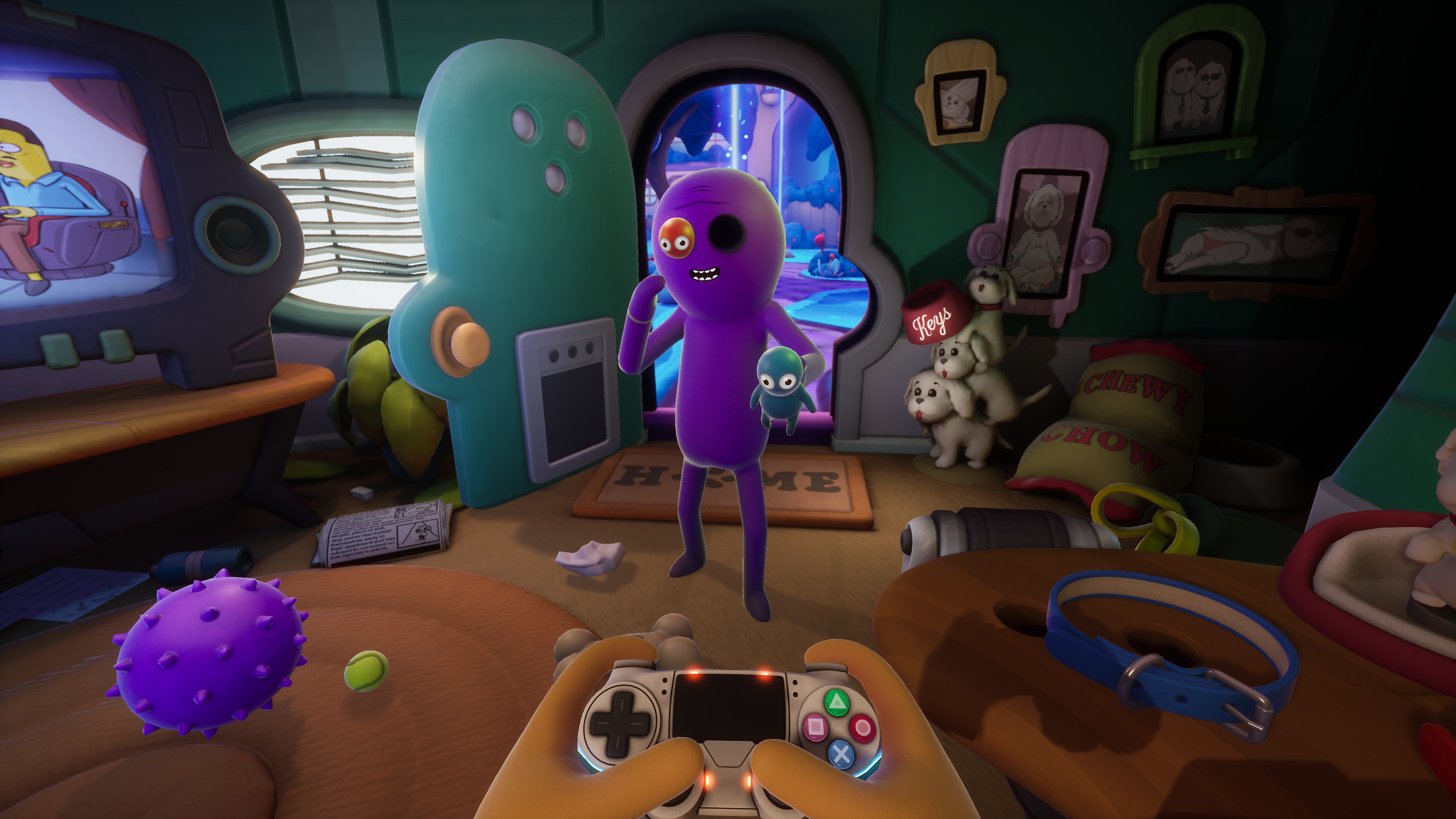 Pause for The Laugh Track

The signature humor from the Rick and Morty co-creator, for better or worse, is present in Trover Saves The Universe. That’s not to say the jokes are horrible, some of them come off quite well, the first time you hear them anyway. Then there are times they get rather annoying, insanely quick. Not in a “Boy, I wish this sequence would end so I could continue my adventure kind of way” more of an “If you don’t shut the hell up I will delete this game and drink until it is purged from my memory kind of way.”

Case in point, there was a puzzle early on in the game that required a series of buttons to be pressed in a certain order to illuminate them all. At first sarcastic remarks were made by the protagonist controlled character about how good of a job I was doing. Two or three instances later and the guy wouldn’t shut up as he cycled the same three dialogue lines every five seconds like he was worried he would be forgotten if he stayed quiet long enough for me to solve the puzzle.

Seriously, I don’t need to hear “FUCK THIS, FUCK THE BUTTONS LET’S JUST SMASH THE GATE” on a loop. I tried for ten minutes to solve this puzzle and gave in just to shut the dialogue cycle off. Which also brings up the point, if the bloody gate was breakable why did we even bother with the previous two button puzzles?! I know the whole thing was supposed to play as some comedic take of the masturbatory tasks in a majority of video games, but it didn’t pay off that way. 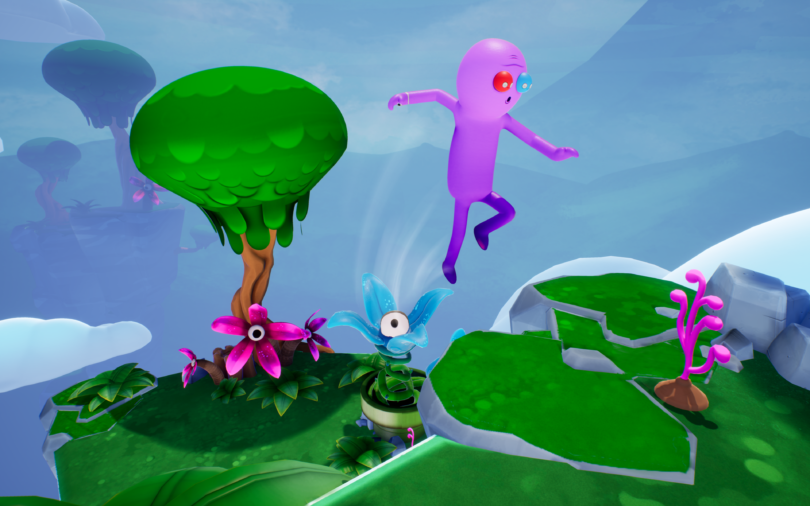 The comedy could be hit and miss as stated but there were some enjoyable moments. Such as the tutorial where the main character learns that they are a living being that is controlling another living being in the game with a controller. Then an older man tries to stop the protagonist, because his dogs are the reason some huge monster is threatening the universe, and we kill him. Then the character controlled by the in-game controller panics about getting the story straight between the two. That’s a solid instance of comedy in the game, but for every instance of that, there were just as many instances when the game overplayed its’ comedic hand so to speak, referencing the instances above with the puzzle.

Trover Saves The Universe has an interesting concept with the camera but it can get a little aggravating during combat. Since the camera is a living creature in the world and the character doing combat is a wholly separate entity getting the two to work in cohesion can be a huge task in itself.

The character with the controller can only move via teleportation points on the map. The combat is done by a free moving sort of guardian style character, so it is insanely easy for them to get too far apart from each other and then it can be a little hard to judge things like enemy distance and jump pathways.

The game does its best to combat that thankfully by giving upgrades to the player that offers new ways to move the camera character to help them keep track of the combat character. It also makes platforming an absolute nightmare as it can be insanely challenging to judge the height and distance of a jump when having to guess from the point of view of a floating guy sitting in a chair. 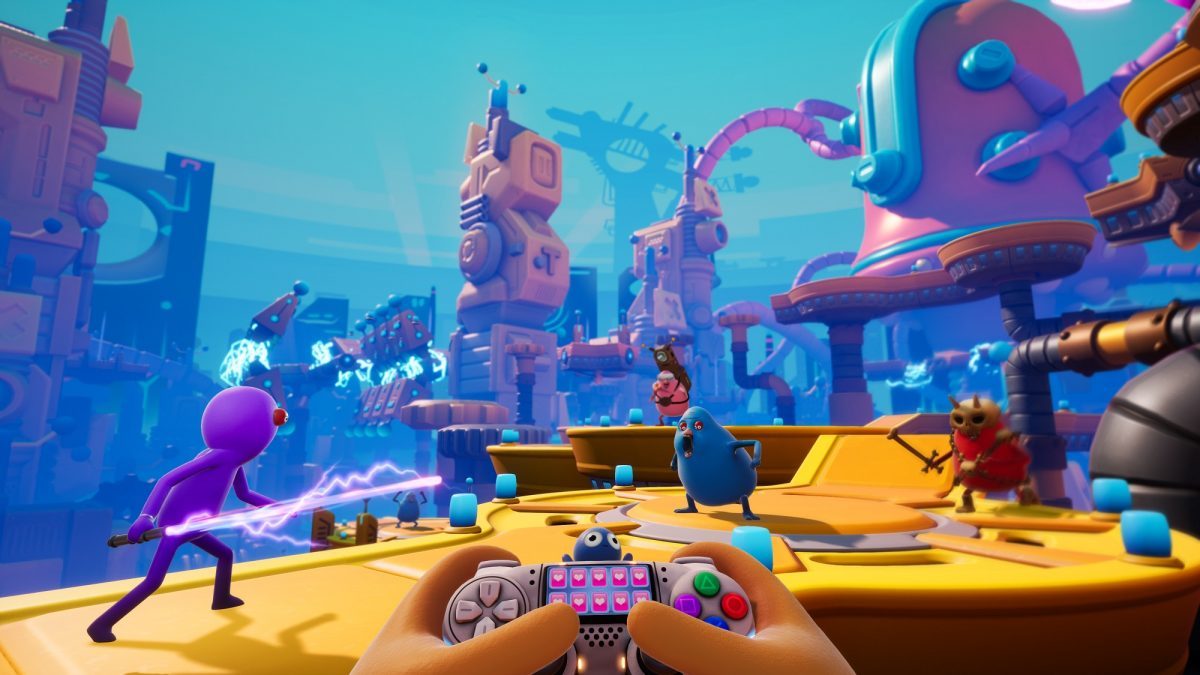 Despite that, the combat itself was simple and for the most part satisfying. Smacking enemies with a sword and dodging various ranged attacks is well constructed enough to make it feel almost as rewarding as making yourself a pop tart and a nice cup of coffee. That’s to say it wasn’t really as challenging as it could have been but it felt like a nice introduction style combat, meant to teach people who have never played a hack and slash style game.

Trover Saves The Universe lets the players choose at certain plot points what happens and it affects the story and dialogue moving forward. Or at the very least gives the player that line of logic. Take for instance when players are on the planet looking for the crystal they need to progress. There was a character who was meant to be annoying and simulate the pop-ups that happen in video games telling the player what to do. Needless to say, he did his job and was annoying to the core.

The choice is offered to kill him off and rid the world of him or go kill one of his neighbors who is a terrible person who eats people and kidnaps pregnant women. So naturally, I pushed the neighbor’s house off the cliff killing him in the process. The downside to that was the women inside were actually the annoying pop-up characters wives. It was literally never brought up and I feel like the re-precautions of those actions could have been explored to make a more fleshed out and interesting story.

Instead of that, we just went back to the ship and the combat character kept making awkward conversations about how we were probably done and that we would never see each other again. Since we were less than two hours into the story, I believed that about as much as I believe anyone who says the way you put your toilet paper on the dispenser can affect the chakra and balance of your home. 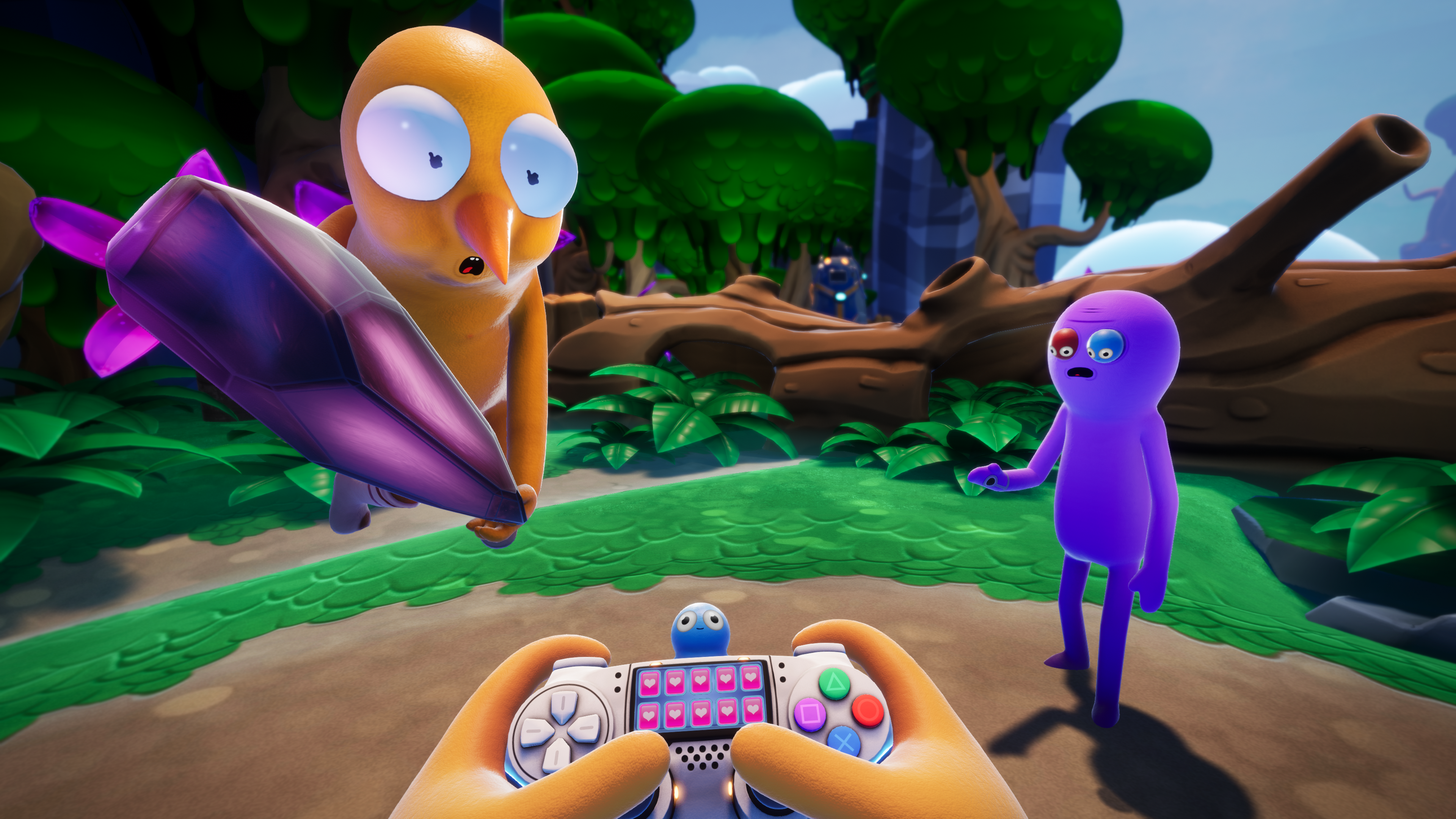 Trover Saves The Universe is an adventure that die-hard fans of Rick and Morty will probably enjoy a lot more than casual fans of the series. For every random instance of tiny mutant characters getting absolved to make the main characters more powerful, or for every instance of seeming to rip off the source material I found myself wanting a little bit more and gleefully remembering all the other games I have on my hard drive. Trover Saves The Universe has some glaring issues but if you can summon the resolve to look past those you may be able to find a little more enjoyment from the game then I did. It certainly isn’t the worst game in the world but it seems to heavily pander to a niche audience.