Last year at PAX South, I told you all about a very special and wonderful game. I had a nice, long chat with Co-founder of Sabotage Martin Brouard about this masterpiece called, The Messenger. It is an amazing homage to the 8-bit/16-bit classics of our youth and it involves ninjas. Now if ninjas aren’t a direct selling point, I will go into further detail about how and why this game is absolutely worth your time to play. In the meantime, take a look at the launch trailer below.

The story is a simple one and it has a bit of a twist that if you didn’t see it coming, you need to brush up on storytelling. The Messenger starts off with our protagonist waiting for a “Hero from the West” to help defeat the demons that are ravaging this village. While you wait, the sensei of the dojo calls a meeting that all the ninjas attend. A couple of sassy lines later, this huge demon destroys and kills everyone in the dojo. The Ninja goes off to confront him and his minions only to be rescued by a very late aforementioned hero. The Western Hero gives you a scroll and tells you to deliver it, making you ‘The Messenger’.

The rest of the game is told through amazing little jokes, wonderful gameplay, and time travel elements. I won’t give too much away, but the story is hilarious and keeps you wanting more as you play.

The Messenger truly is a fan-obsessed letter to 8-bit and 16-bit platformers that many of us have known since we were kids. The game will play on your nostalgia quite a bit, but this is not even a bad thing. As you may have already guessed, yes, The Messenger was heavily inspired by the old Ninja Gaiden games. Brouard and Thierry Boulanger, the game’s designer and lead programmer, have both admitted that much of the development history can be traced back to Ninja Gaiden 2 on the NES.

The game also has a colorful, and way over-the-top, cast of characters and villains. Throughout the whole game, I sat there giggling like a schoolboy at the pleasant little jokes. Do yourself a favor and have a chat with the dryly sarcastic, mystical shopkeeper as much as possible. Not only will he give you random stories, he will also help you with what the area might hold next, as well as have upgrades for you. I mentioned before that the game pays homage to both the 8/16-bit platformer, I mean that as literally as possible. Once you have run through the first part of the game (which is the 8-bit part) you then get hurled into “the future” which, yes, turns the whole game into 16-bit, that includes music as well. It also turns the game from platformer to a Metroidvania style exploration game. It was an amazing, and clever, mechanic that kept the game rolling. There are also moments that feel like puzzles that require you to jump back and forth through time.

The controls feel tight and responsive; while I played on PC, it was way easier to plug in a controller for The Messenger to help you along. The controller made it much easier to make my ninja leap from platform to platform without getting so frustrated. You can move through the levels and cut down enemies so easily once you have a good handle on using all your upgrades. At some point, in the game, you might never have to touch the ground again, however, getting to that playstyle does take some practice. Let’s just say that I have gotten used to falling in pits quite often.

The Messenger does something great to those old-school Nintendo games; it cuts out a lot of the stuff that was truly annoying about them. Unlike a game such as Contra, there is plenty of room to breathe. I never felt entirely overwhelmed with enemies or projectiles. The difficulty can be there, but it isn’t overwhelming. The platforming also feels great; there’s no blind jumps, no awkward landings, and it’s way more fluid with its jump-slash-jump mechanic. Another mechanic they fixed was the ‘dying and restarting everything from the beginning’ thing that Nintendo was so fond of. However, in lieu of dying, your ninja will to the last checkpoint that you activated. A devious, snarky, little demon will also appear, and for a short period, as payment for “saving you”, he will steal any shards you acquire. At first, I quite liked The Messenger‘s checkpoint system, but as I found myself falling to my death more frequently, it felt more like a chore. It doesn’t help that your health isn’t fully restored when you die, although, in fairness, there was always a health jar somewhere close. So I suppose it evens out. I never had a complete gamer-rage meltdown moment. I always felt that the game was what it was and the issue was my fault. My death was my lack of timing or my lack of judgment. Sure, I cursed and yelled but never to the control smashing. The game is well balanced and while some may find it frustrating it only pushed me harder. Ah! The joys of growing up in masochistic gaming.

The Messenger also throws a steady stream of upgrades your way to help you on your journey. You’ll sometimes find yourself at crossroads which you can not pass. However, fret not, the shopkeeper will have the instrument you need. You’ll be newly equipped with a tool to help you on your way.  In the beginning, you will get ninja claws to help climb up walls, a wingsuit that enables you to glide, and a rope dart that gives you the ability to grapple hooks, walls, and baddies; always for free too! There are other upgrades that are available for purchase from the shopkeeper too, like extra health segments or more ninja stars. Those upgrades come from collecting enough shards to purchase them.

I really want to congratulate Sabotage for making an amazingly beautiful game. Sometimes, working in the low bits of video games can make it feel too grainy. However, the artists at Sabotage truly understand how to make old graphics work beautifully together. From the multilayered background to everything happening in the foreground, you will be amazed that this is 8/16 bit. Also, the music is so incredible that I’m humming it while I write this. This original soundtrack by renowned chiptune composer Rainbowdragoneyes (yes, the name alone should get you pumped), handmade all the music using Famitracker, which was solely made for producing music for the NES/Famicom-systems. Round of applause for all the artists (yes, including music) who worked on The Messenger.

The Messenger is without a doubt one of the best indies available on PC and the Switch right now. This game may have a lot of competition right now with the sudden sea of Metroidvania games available, but its stunning looks, fantastically wonderful soundtrack, clever and hilarious writing, and amazing gameplay really put it a step above the rest. I played this game every night for a week so far, and all I wanted was to play more. I can tell you, dear reader, there’s little to complain about. While the game can seem a bit tedious, overall, you will not be disappointed. Sabotage has made a truly amazing game and well worth your buy. If you need reassurance for The Messenger (like none of this review sank through your skull) well then — Ninjas! 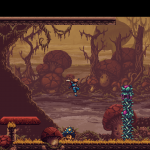 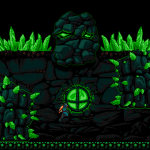 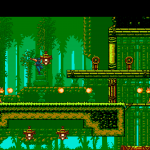