Have you ever started up a game, not knowing what to expect, and then all of a sudden you are 5/6 hours deep inside a monolith of exploration? Well, welcome to Subnautica, by Unknown Worlds Entertainment, the game that sucks you into a huge underwater reconnaissance adventure. A game that trapped me in its beauty for hours that I forgot to eat, even though the game is survival and your character must eat and drink, in real life – I forgot to.

Let me start by saying, that if you are the type of gamer that loves to explore and build stuff out of simple supplies you will absolutely love Subnautica. If you aren’t then let me tell you a little bit more about the game because I’m not either and I am absolutely hooked.

In the distant future, full of space travel, something goes wrong and your entire ship goes down and you crash land on a planet full of water. You are seemingly the sole survivor, Stranded with little more than an escape pod, a talking datapad/PDA, and a better fabricator that you’ll see on an episode of Star Trek. It will let you turn resources plucked from the ecosystem into sophisticated equipment, such as knives, beacons, and tools to give you further diving capabilities. Then it is up to you to figure out what happened to your ship, the crew, and how to get back to a home that is somewhere in the distant stars above.

Your character starts in a pretty damaged escape pod. Your adventure starts immediately as you leave the pod. Jumping into the ocean and exploring, picking up native fish for food and water supplies, finding ship debris to turn into O2 tanks and fire extinguishers, and other minerals that can be turned into flares and batteries. Subnautica is not here to hold your hand. There deliberately isn’t a mini-map, much less a map screen, and Subnautica is better off for it. Survival is for you to figure out. You need to analyze which biomes are located where and what materials they produce. While I do admit, it can be overwhelming to get a lay of the land at first, you start to mentally chart where things are. This is by no means easy but it is so rewarding in the end. Your replicator and menu will tell you what ingredients you might need to build stuff, but it is up to you to find them, as well as the previous tools you will need to extract the materials needed.

The different zones have their own identities, from the cheery picturesque shallows to the green-tinted kelp forests to the glowing Bulb Zone. I constantly felt like I was making genuine discoveries. This is what kept me playing so long every time I started up the game. Hours spent looking at new areas and finding a way to get to places I couldn’t originally. Simple and Yet Rather Difficult

While you can pluck small fish right out of the ocean and cook them, combat is by no means encouraged. That’s true in the beginning when you only have a knife to defend with and it remains true even once you’ve built a submarine, multiple bases, and even the ultimate deep-sea mech. While, yes, it is true that Subnautica is home to nightmarish creatures, you aren’t really meant to face them head-on and fleeing is a valid option. While many people might see that has a down note, it really isn’t. Like with most exploration ideals, you are only there to survive, we shouldn’t be messing too much with the world around us. Even though later on you build massive underwater bases and stuff. So what?

Actually, my favorite part of the game is spending hours with the scanner. Once built you can scan everything you come across. Each animal, plant, tool, and rock has a history and information page that you can read about. It just shows the level of detail that Unknown Worlds Entertainment put into their world. There are a few different modes for those that think that deep sea aliens are completely effing terrifying (and they are). Creative Mode will let players freely explore and build bases to their heart’s content. There is no danger and everything’s unlocked. Survival Mode has you managing your food and water needs. Hardcore Mode gives you one life – so good luck. Lastly, there is Freedom Mode, which falls in the middle. So, you don’t have to worry about hunger or thirst, but you will have to track your oxygen and health. That’s a nice balance. It’s still a decent challenge, but you won’t have your gameplay detained by those inventory-hogging foodstuffs. Subnauitica has plenty of hours for you to waste your day in, the water-planet is fun to explore  Honestly, it is hard to do the game justice by just talking about it.

If I had to make any complaints, I suppose that it would be some base-building mechanics could be a tiny bit clearer. Also, that certain parts of the story progression could be better posted. Even when I was on the right track, I would double guess myself and feel like I needed to go back because I missed something, only to find that I was ok.

Otherwise, it looks and plays beautifully. The colors and graphics in the game are wonderful to behold. Subnautica works as a brilliantly serene, lonely sci-fi adventure.

Subnautica is available for Windows and Mac via Steam for $24.99 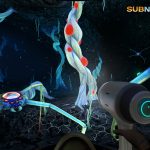 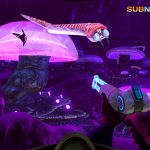 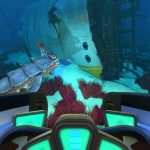