This year at PAX South I  experienced a game that changed the definition of an arcade isometric top-down twin-stick shooter. We are Fuzzy has created one for the books titled, Sleep Tight, a game built on pillow forts of nostalgia. I was able to take some time and play Sleep Tight and chat with Banks Boutté, Co-founder of We Are Fuzzy. First, Check out the trailer below.

Sleep Tight is a top-down shooter for the kid in all of us. Remember the days when your imagination would work overtime at night, fearing the monsters that resided in the walls, windows, and closets? This fear is what Sleep Tight feeds on. The main character, who’s just a kid, builds a base with pillows and stand-alone turrets as he shoots his own soft-bullet dart gun at the monsters as they attack from all directions during the night.

It’s kind of like having some kid go up against all the Monsters, Inc. monsters by himself.  He could be anyone of us and I believe that is why the game works so well. He has to fight back against them using his customized toy guns and uses jacked-up pillow forts to block them.

“It’s about the shared childhood experiences of our imaginations running wild,” said Boutté. “The story is to build the pillow fort of your wildest dreams. Our inspiration was very much in the Pixar realm, of the kid in all of us.”

But the game is even more than that. Being able to squash your childhood nightmares is invigorating. While mine may not have looked like the monsters in Sleep Tight, I still projected them on to the monsters here.  It is a wild ride from start to finish. The best part is that even if you can’t survive the night you learn how to change your strategy for another run through.  “We want players to try and beat their last score. How long can you survive? Then try something new to get you further.”

How Long Can You Survive?

Gameplay feels easy and natural and yet new, with its own type of difficulty. Here is how it works:

There are eight hours in the day and it works on day and nighttime cycles. When you shoot a monster, you can pick up a token known as a Sun, which gives you credit to buy things in the game. You spend those Suns on things like ammo, barriers, research, and weapons. When you run out, the night arrives and with the night come the monsters and therefore another round to survive. Easy, right? No.

I played a couple of rounds in a demo on PC and it was wonderful (but I can see how it runs just as smooth on the Switch). It is absolutely amusing to keep moving around the living room, setting up barriers and turrets, and shooting all at the same time. There is plenty to be aware of while you play. Each daytime round lasts for just a minute, but it can be an intense ride that feels a lot longer in the later stages.

The hardest part is if you run out of ammo. All of your guns are based on a collective system. Think of it like you have a few ‘Nerf’ guns on your person, but those all use the same ammo. Once you use up the collective number your only recourse is to run away from the monsters. So, for a very intense minute you, and your limited ammo, need to act cautiously and yet once the time begins it becomes frantic as hell and all strategies go out the window. As if that wasn’t enough pressure, once every ten rounds there is a “Blood Moon”, where the round lasts longer and is extremely intense.

Like I mentioned before, during the daytime are the ‘In between rounds’. This is where I was able to level up. I could choose from weapons such as Gatling guns, shotguns, water-balloon launchers, remote-controlled gun turrets, and other toys. You can buy power-ups or barriers. Heavy turrets fire homing rockets that seek out monsters.However, you can also make turrets that have faster firing times which could help in smaller forts. The point is to design the room how you play. You can make an aisle of guns down the center or keep to the corners. Every aspect of the building of your fort is entirely up to you.  The more suns you collect throughout the rounds the more insane your fort can become.

Sleep Tight will debut on the Nintendo Switch and PC in the first quarter of 2018. We Are Fuzzy created a lovable, fun, and interesting way to revitalize the top-down shooter. I, for one, can not wait for the full release. Be sure not to miss out on this one! 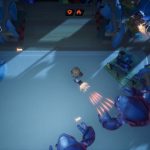 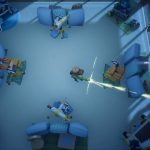