Sometimes all it takes is one word to sell a game and others take full write-ups. The game I’m about to talk about, The Messenger by Sabotage, is a game I could do both ways. For its one-word mic-drop selling point I will say “Ninjas”. For a complete explanation why The Messenger was one of the ‘Best in Show’ for PAX South 2018 (at least for me) then continue on reading this article. I was able to play the demo and have a long chat with Co-founder of Sabotage, Martin Brouard about this masterpiece. Since ninjas have already been mentioned let’s continue saying that this game is an amazing homage to the 8-bit/16-bit classics of our youth. Take a look at the trailer below.

The game starts off as you find your hero waiting for a “Hero from the West” to help defeat the demons that are ravaging this village. While you wait, the Sensai of the dojo calls a meeting the ninjas attend. He is quick to make fun of the history lesson and then he goes off to listen, a couple of sassy lines later and this demon destroys and kills everyone in the dojo. Our hero goes off to confront him and his minions only to be rescued by a very late ‘Hero from the West’. The Western Hero gives you a scroll and tells you to deliver it, making you ‘The Messenger’. The rest of the game is told through amazing little jokes, wonderful gameplay, and time travel elements. I won’t give too much away but the story is hilarious and keeps you wanting more as you play. The Messenger is obviously a fan-obsessed letter to 8-bit and 16-bit platformers and action games many of us know as kids. As you may have already guessed, yes, The Messenger was heavily inspired by the old Ninja Gaiden games. Brouard and Thierry Boulanger, the game’s designer and lead programmer, both admitted that much of the development history can be traced back to Ninja Gaiden 2 on the NES.

The game also has a colorful, and way over-the-top, cast of characters and villains. The whole demo I sat there giggling like a school boy at the pleasant little jokes. The Mystical Store Owner is a riot, or as you can see in the trailer above, there is a seemingly tall robed enemy who then descends to the floor only to be revealed as a very short boss with a long robe. I never stopped being intrigued by what came next as I played. The Old and…Older…Come Together as One

The Messenger‘s gameplay is one of the most fun, responsive, and smooth that I was able to play all weekend at PAX South. The game was designed to be both a healthy call back to people who enjoy the old platformers and the exploration of a game but also manages to be speedrun-friendly. Brouard explained that there are multiple paths to each level: the normal, obvious path, and the paths with huge shortcuts hidden behind skill-based techniques, like using the “cloud-step” (a double jump which can only be activated after you attack an object like an enemy or an enemy projectile). Basically, the game gives you the option (when everything is fully unlocked) to use your mid-air jumps and to chain them infinitely.

Brouard was quite proud of the  “challenging gameplay and tight controls”, and he has all the reason in the world to be, the game controlled beautifully. The Messenger masterfully added new and old ‘ninja weaponry’ from Kunai knives to a wingsuit, all adding to that tight control that Sabotage was looking for. After my demo was over, all I wanted to do was play more. I was hooked. It brought me back to being a kid and I was a master ninja all at the same moment.

One of The Messenger‘s most interesting mechanics, however, is its generation-hopping aesthetic. When I said it’s a fan letter to both 8-bit and 16-bit games, I wasn’t kidding: after playing for a while, the whole game upgrades from an 8-bit action game to a 16-bit Metroidvania game. This includes improved music and visuals (Which were already great, to begin with). You can also swap between the two styles mid-level to solve puzzles.

It’s like jumping from NES to SNES in the blink of an eye. It is a lovely way to represent ‘time travel’ in a game. I could go on and on about The Messenger but I truely believe that if you are a fan of Metriodvania type games, or ninja games, you will be blown away by it’s gameplay.

The Messenger, in my own opinion, was the most exciting and interesting game shown at PAX South. Absolutely keep an eye on as it cloud-steps toward its 2018 release. 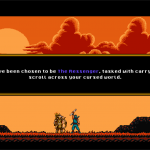 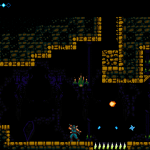 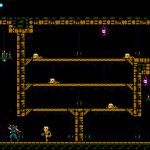 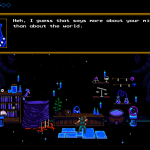 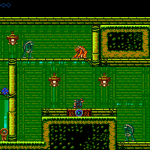 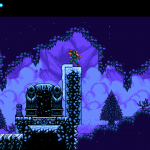 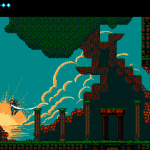 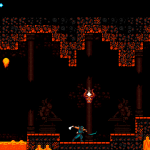 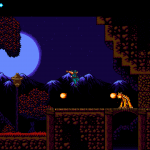