The latest Overwatch statue has been officially revealed. For all the D.Va fans out there, this will both make and break your heart, and maybe your wallet. Blizzard has released several high-end hero statues over the past few months, and the D.Va statue marks the most recent one, revealed today.

The D.Va statue features her sitting on the blaster of her mech, and it’s entirely hand-painted. The design is very intricate, including all of the logos and decals that you find on her mech in the game. The statue itself is huge, measuring in at 19 inches tall with the base, 18 inches wide, and the base is 13.5 inches in diameter. You can check the images at the bottom of the article.

D.Va is the fourth high-end statue that Blizzard has released. She joins the statue ranks of Reaper, Widowmaker, and Tracer. D.Va’s statue, by far, is the most expensive. The other three statues average around $150 dollars each, but you can expect to pay around $450 for D.Va. The D.Va price tag exceeds that of even the World of Warcraft statues, which have been the most expensive.

The statue is available now for pre-order on the Blizzard website.  Blizzard warns that the final product you receive may differ from the pictures, as it is hand painted. The statue has a release date of late 2017.

And in other Overwatch news, the game recently got a patch to change the way loot boxes and highlights work. You can read more about that here. 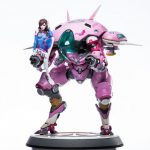 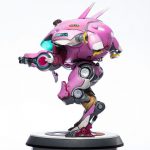 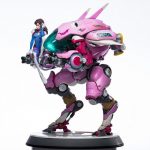