When disaster befalls 16th century Japan, survivors are forced to relocate and rebuild their lives.  This causes tension and a “toxic atmosphere of protectionism,” and the only thing that can cure it is…RAP BATTLES!!? This is the premise behind Masaya Matsuura (Parappa the Rappa) and Keiichi Yano’s (Gitaroo Man) Kickstarter project Project Rap Rabbit.

The main hero, multi stepToto-Maru, is a simple rabbit farm boy who sets out to counter corruption through the power of rap.  He is accompanied by his amphibian sidekick, Otam-Maru, and will set out to unify and bring peace to the land by defeating rap legends.  This new creation from NanaOn-Sha and inis J aims to fuse the geographically distant Japanese history and hip hop culture. Project Rap Rabbit encourages experimentation and aims to put the player at the center of a true rap battle.  This is done multi-battle system using a “Swag Gauge” to determine the status of players and to determine the victor. 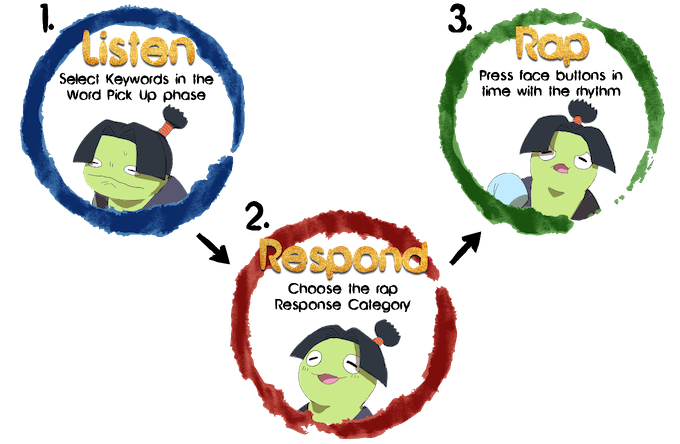 The first step is a listening component, where important lyrics from your opponent will be chosen by the “Word Pick Up” phase.  You can hone in on certain lyrics to use against your opponent in the next “Respond” turn.

In the “Respond” turn you select from an emotion wheel that was inspired by famous titles like Fallout 4 and Mass Effect.  You can choose from coerce, boast, laugh, and joke; and each choice will have a different effect depending on the type of opponent your are rapping against.  Emotions will also have different effects dependent on whether or not your Swag Gauge is below or above a certain percentage.

When Toto-Maru’s status drops below 50%, he will enter a “Back Against the Wall” state.  In this state certain lyrics will deal more damage to this opponent, and used strategically, timed use of this state can deal lot of damage.  Players can also use this state to complete special bonus challenges and obtain higher scores to get them higher on the competitive leaderboard.

Depending on the emotion you chose in Respond, you will be provided with a prompt of unique lyrics and rhythms.  If you hit every one perfectly, you will boost your Swag Gauge and gain major points.  Doing this will also deplete your opponent Swag Gauge, which can cause major damage and even defeat.  If you fail your Swag Gauge will go down, and if it hits zero, “your failure will go down in legend.” 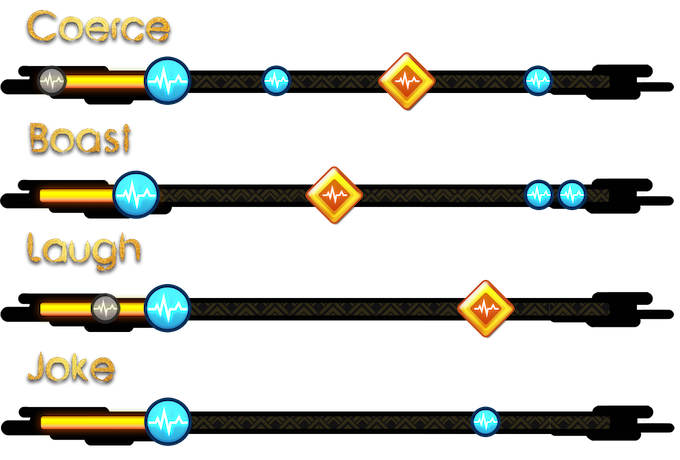 Finding the most effective lyrics during the Listen phase and carrying them out successfully in the Rap phase can earn you big points.  Bonuses come in different shapes and will appear at different times, so it is up to the player to watch carefully and respond quickly.  Even altering the emotion of a phrase during the Rap turn, an extremely difficult maneuver, will aid you in claiming the most points. 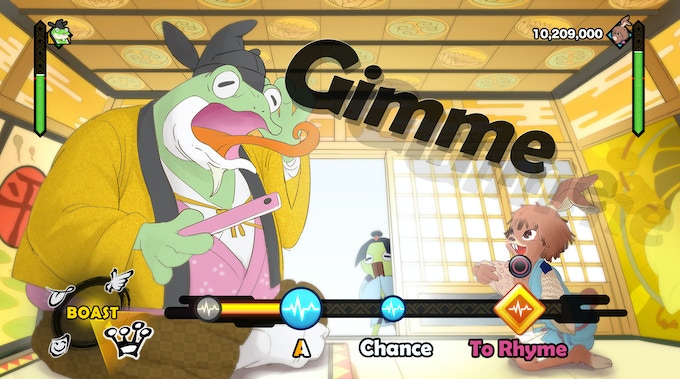 While Project Rap Rabbit has already been announced for PS4 and PC through Steam, the team has prioritized a Nintendo Switch version of the title as a stretch goals.  The project has currently raised $100,417 of its $1,104,107 goal, and has until June 19th to reach it.  Rewards range from a Shout Out on the backer wall for $5 to the $10,245 Ultimate MC Edition that includes participation the official livestream and lunch with the project leads at the Tokyo studio.

Shout Out ($5): Your name will be added to the Backer Wall section of the Project Rap Rabbit website.

White Label Edition (Digital-$39): A digital copy of the game and the Shout Out tier. 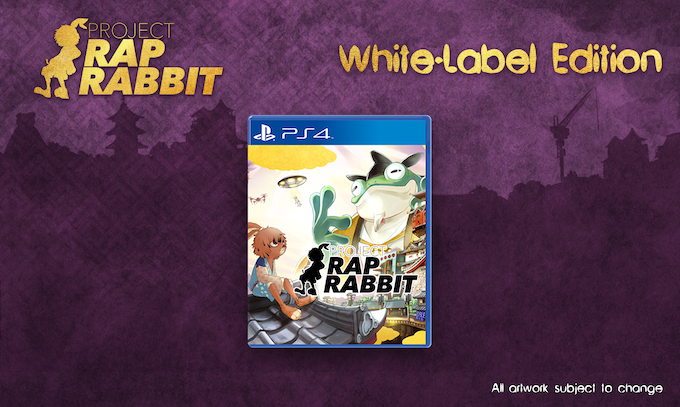 Hardcore Edition ($193): the backer only luxury T-Shirt, the Toto-Maru and friends keyring and badge set, Project Rap Rabbit folding fan, a beanie, Otama-Maru plush, the official and remixed CD’s, a gatefold vinyl edition of the soundtrack, and your name will be added in the credits. 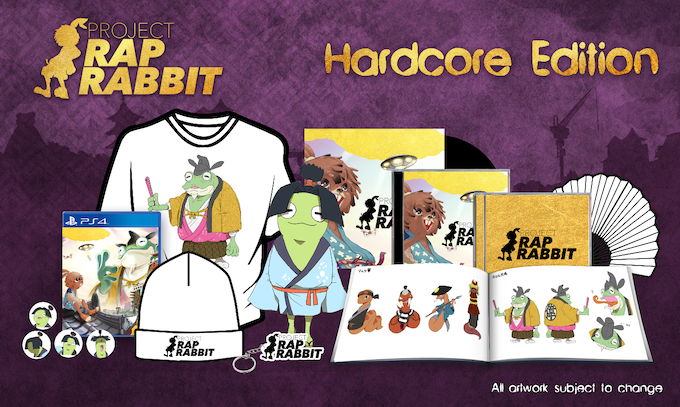 Tagged Edition ($387): A signed copy of the game, your name and a short message from the team on the “Special Backers” section of the credits; all Hardcore benefits included.

Platinum Edition ($1,289): Help the team name and design a PS4 trophy/Steam achievement and have your name and message appear in the”Guest Writer” section of the credits, all Off the Chain benefits.

Familiar Face Edition ($1,933): Lead artist Atsushi Saito will draw you in the style of one on the game’s characters and all Off the Chain benefits. 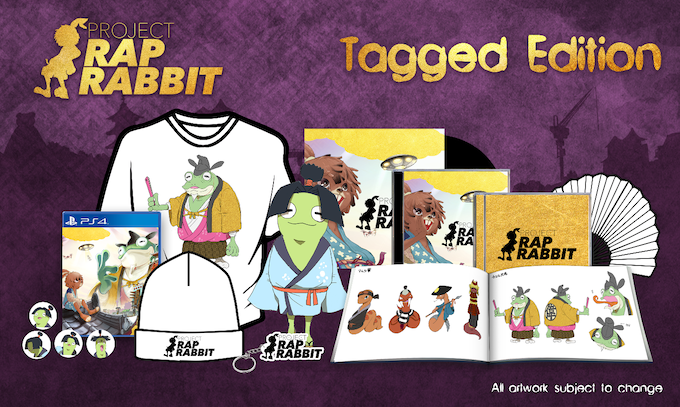 Take the Stage Edition ($2,255): Your voice will be incorporated in the game, your name and message will be in the “Guest Cast” section of the credits, and all Off the Chain benefits.

Freezeframe Edition ($2,899): Help create a victory, defeated, or reactionary pose for Toto-Maru and have name and personal message in “Guest Animators” portion; all Off the Chain benefits.

Photobomb Edition ($3,866): An image of your pet will appear somewhere in the game with your  name and personal message in “Guest Photobombers” section; with all Off the Chain benefits. 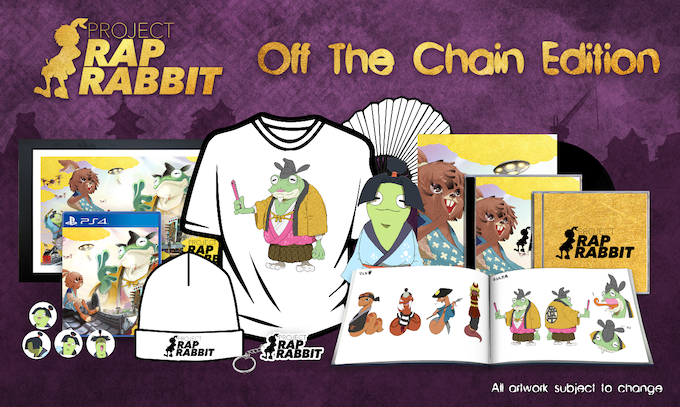 Heavy Petting Edition ($5,155):  An image of your pet will appear will be a character in one stage, and you or your pet’s name will be a lyric in one of the raps. Lead artist Atsushi Saito will draw you and your pet in the style of one on the game’s characters with your name and message in the “Guest Cast” credits section. All Off the Chain benefits included.

Studio Session Edition ($5,799): Join the team during a rap recording studio session, and record a rap with your voice for the Take the Stage edition tier rewards.

The Ultimate MC Edition ($10,245): Participate in the official live stream to celebrate the launch of Project Rap Rabbit at the studio in Tokyo.  Have lunch with the project leads in Tokyo and join them for a karaoke session.   You’ll also be able to join in on quarterly global development update calls, receive all Off the Chain benefits and be credited as a “Guest Producer.”