Do you remember Banjo-Kazooie? No youngin’s, not that one where you built cars. I’m talking about the classic character platformer on the Nintendo 64. Yooka-Laylee by Playtonic Games feels like it fell through a time portal from the 90s, with some better graphics of course. Despite never owning an N64 myself, Yooka-Laylee feels like the game I remember playing at friends’ houses as a kid. It has kept me interested and engaged in a way that I wasn’t quite expecting.

Yooka-Laylee starts with the main villain, Capital B, and his minion Dr. Quack vacuuming up all the books across the world. At the same time, Yooka (the lizard) and Laylee (the bat) just found a secret pirate book they’re going to try and sell right as it gets sucked up by Capital B. The pages spill out as it flies away and both Yooka and Laylee set off to get their book back. It’s a pretty flimsy premise, but the story is mostly just for appearance’s sake to get these two moving. At least Banjo was trying to get his sister back. The game plays off this book theme consistently throughout the adventure. Each level portal is a book you are sucked into. You’re collecting pages to unlock and expand these levels and you collect quills scattered throughout each level. You’ll also find ‘ghost writers’ in each level which amount to special entities you need to appease before you can collect them too. Yooka-Laylee has a lot of humor at its core, full of groan-worthy ‘dad jokes’ and some good jabs at video games and it’s spiritual predecessor Banjo-Kazooie. The overarching plot is minimal at best, but the game shines with specific character designs and lines of dialogue. As it was with Banjo-Kazooie, you either like the constant grunts and noises every character makes or you don’t. I found them cute at first but they definitely wore out their welcome by the end of my time with the game. I wasn’t kidding when I said this was a game out of time: it’s a character action platformer through and through. Without getting too reductionist on it, it does feel like a reskinned Banjo-Kazooie. Yooka can jump and attack enemies while Laylee adds in some of the additional flight and environment traversal. The duo can unlock new abilities that will let them jump higher, glide, or absorb powers from the world.

A lot of this game feels like a giant puzzle, where your reward is always another page to collect. Sometimes it’s combat-focused where you need to kill the enemies in an area. Other times you see a giant ice block in front of you and need to figure out how to find the nearby fire berry and melt it down. The depth of any given solution is going to vary and sometimes it may not be solvable until Trowzer has a new move for sale. I found several places where a jump higher than my double jump looked necessary, and things like random beehives and cannonballs throughout the levels didn’t make any sense until the requisite move is unlocked to interact with them. After you solve the puzzle or recognize the different pieces though, all you need to do is find the right nearby solution in each stage.

The game itself is divided into five stages and the main hub world of Hivory Towers. Personally, I found the first level, Tribalstack Tropics, to be the most visually interesting of the five worlds. There’s a lot to see and do crammed into the world. Contrast it with even just the second world, Glitterglaze Glacier, and you notice a lot of dead and empty space to run around and collect your requisite items. I really didn’t appreciate the quiz time segments when traveling from world to world though. Capital B’s right-hand man is a duck in a gumball machine named Dr. Quack who asks you trivia questions in order to move onto certain parts of the main hub world. He even says it’s to “slow you down” so Capital B can get away with his plans, but I found it to be far more annoying. 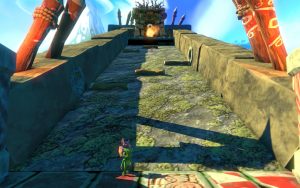 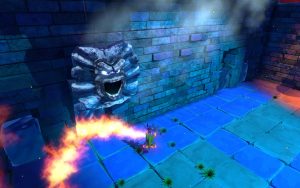 I touched briefly on the collectibles earlier, so let’s discuss what that actually looks like in Yooka-Laylee. Each level has 25 pages to collect, 200 quills, five ghost writers, and one of four special power-ups. Pages are used to unlock new levels and extend levels you’ve already unlocked to get new areas. By the end of the game, you’ll need 100 pages to fight Capital B. Quills are used to buy new moves from Trowzer and allow Yooka and Laylee to explore more of the world. The four special power-ups will extend your health, give you more power, unlock a world-specific transformation, or unlock a game in Rextro’s arcade to play. Lastly, the ghostwriters will unlock a page if you collect all five. As I did some research, there is even one secret collectible in each world that doesn’t even show up on the pause menu, but you’ll need it if you want to hit 100%. 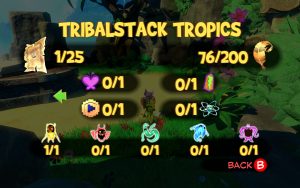 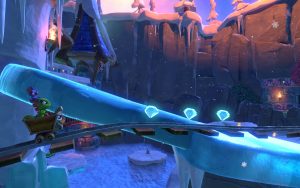 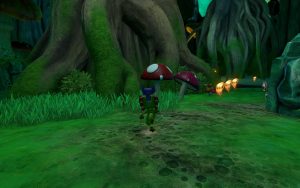 There are a lot of things to collect and one of the downsides to Yooka-Laylee is that they don’t really feel satisfying if you try to 100% complete each level. You’re crossing most of these items off a checklist with little in the way of an actual reward at the end. I’m used to endlessly collecting items and sometimes I actually enjoy it. This felt like more work than it was worth in the end. My advice would be to explore what you want to and once you’re bored or stuck in an area, just move onto the next world. You’re going to burn out really quick if you try to collect everything all at once.

The one aspect that didn’t come over from the 90s is the graphics. Yooka-Laylee is an exceptionally pretty game that looks and sounds great. The music and sound designs in the world really evoke the feeling of the classic Rare platformers of the N64 with a fresh coat of paint on top (seriously, check out that trailer up top and you’ll see!). Each character feels vibrant and interesting in an otherwise basic story. My two personal favorites were Trowzer the snake, a shady businessman who sells Yooka and Laylee new moves, and Rextro, a polygonal T-Rex who runs a bunch of arcade machines. The characters pop and even though Playtonic has slapped a pair of eyes on just about everything to make it come alive, I thought they were really interesting. 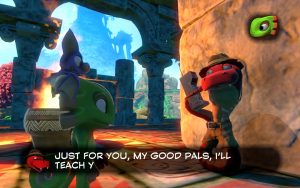 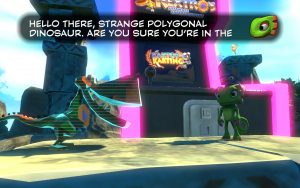 One item worth calling attention to is the camera. I’ve noticed it pop up as a common complaint with Yooka-Laylee and I didn’t think it was an issue at first. As rooms and puzzles have required more precision from Yooka and Laylee though, I began to see the limitations. The camera problems in Yooka-Laylee stem from the fact that the camera just isn’t clipping around or through the obstacles in the world properly. Most camera setups try to avoid it, but Yooka-Laylee’s camera instead will cut quickly to another angle or zoom way in on your character. Getting turned around or having to stop and reorient the camera is a constant struggle in later portions of the game and while a day one patch was supposed to relieve this pain, it’s still not that great. No Completion Bonus for Reading This Review

Yooka-Laylee is a game in that classic Rare-style platformer from the Nintendo 64 era and with that comes all the problems that many game developers have solved in the last twenty years. They set out to make a game in the same style and yes, they really did that in every sense of the word. I said at the outset that I came into this with no real nostalgia other than playing Banjo-Kazooie a handful of times and wishing I had an N64 myself. For some reason, this game has felt like a blast from the past and I’m enjoying it despite never really playing the predecessors for more than an hour or two. Judging it on its merits, it has some rough spots when it comes to level design and camera work, and it makes up for it with a whole lot of charm. I wouldn’t expect Yooka-Laylee to pick up a ton of praise at the end of the year. For folks who want something that feels weirdly different from modern video games, it’s worth checking this one out.

Yooka-Laylee is available on PC, Xbox, and PS4 with a Nintendo Switch port coming later this year.