Have you ever wondered what the secret life of the Yakuza is like? What this crazy Japanese Mafia and its tradition entail? What were the 80’s like? Well then the good people at Sega and Deep Silver give you Yakuza 0, a little taste of action and all the karaoke you can handle.

Yakuza 0 is a redemption story first and foremost, it is also a sequel to the other three Yakuza games. You play as a young version of Kazuma Kiryu, a low tonged thug of the Yakuza ladder but extreme badass. At the start, Kiryu tracks down a guy who owes a loanshark money, beats him up in an alley, and kindly, covered in blood, hands the money to the loanshark. Moments later in a noodle shop with his best pal, and fellow yakuza, Akira Nishikiyama, find out that the guy he roughed up was murdered. Kiryu later realizes that he was sit up and goes to the head of the Dojima family to ask to be removed from the Yakuza. After he goes civilian he goes on a punching quest to find out what happened to clear his and his sergeant fathers name, Tsukasa Sagawa. Kiryu isn’t the only one you’ll be playing as though. In Osaka (another of the major cities in-game), you’ll play as Goro Majima, a cabaret club owner who is being exiled from the Tojo Clan due to hit-gone-bad years earlier. Despite his club being highly successful, he figures out that it is really nothing more than cage and as he’s under constant surveillance. One day, he’s offered the chance to redeem himself by assassinating a target. He takes the job, but when he realizes his target is  a defenseless blind girl he obviously can not go through with it. He decides to protect her instead and find out why she’s being targeted.

The two have suddenly found themselves getting involved in the terrible and strange events of the so-called ‘Vacant Lot’ dispute, which for some odd reason is centerpiece of a power struggle for all the Yakuza families across Japan. In order to find out the truth behind such a power struggle, as well as maintain their own innocence and safety, they set out to investigate all the events surrounding the “Vacant Lot” incident.

From here its nothing but running around and gather information from one thug to the next. Many of the characters you know and love from the other games make appearances and as this game is a prequel, you can sort of guess the ending, but no spoilers here.

The Bad News, The Good News…and the Gameplay

Moments of Yakuza 0 were absolutely amazing, others not so much, and some were just downright terrible. However, let us go through them one by one so you get an idea of how this game feels and plays. Always take the bad news first, right? Unfortunately, as beautiful as this game looks, new players to the game series might not feel like they are playing a game. You should be warned that a giant portion of your time playing will be spent sitting through cut-scenes. Long, very long, unusually long cut-scenes. The worst part about them is that while you sit through them they go from fully detailed and gorgeous graphics to half-assed robot looking movements, back to great graphics, then off of JRPG style text screens with no voice, and then back to robots, followed by a small action scene, then back to great graphics. I apologize if that’s confusing but I promise you it is no better when you play.

As awful as that can be, the cut scenes that are great really show off the 1080p 60fps presentation afforded by the PlayStation 4. While the changing up was a big turn off to me, the story over all was fun and interesting with twists and turns that would make M. Night Shyamalan’s head spin. Not only that but while you walk though this open world (and I use that term loosely), there is no end to mini games and fun crap for you to do if you need a break from the story. Want to beat up some guys for money? Ok! Need to test your karaoke skills? Sure! What about pool? Darts? Disco!? Yes! This game has got it all. Don’t forget to stop by the arcades where you can play old Sega gems such as Space Harrier and OutRun. There is also a ‘video store’ you can stop into and watch videos that you find…It’s mainly for perverts but I will confess, the videos are well made, and I’ll leave it at that. Then I spent 3 hours playing pool and darts in this game and did not feel ashamed. Lead Kiryu on a nice little walk in the main strip of Kamurocho under the blinding cover of neon by night and it’s a an gorgeous piece of virtual tourism.

If you feel you are any good at the games, you can also play these mini games online against real opponents. Yes, the multiplayer in this game has all the mini games you can handle. I warn you, some of the people playing are way too good than they should be. However, it really is fun and it did not stop my from competing. 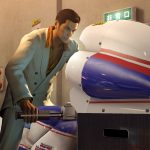 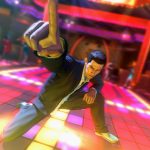 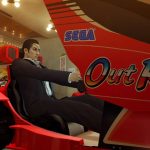 The saving graces of this game truly are the badasses that are Kiryu and Majima. Beating the snot out of any challenger that comes your way, and it will happen a lot while running through the streets, is a great distraction that are the cut scenes. While the camera angles can be a challenge to overcome the fighting style and match-ups are so much fun. One of the more interesting mechanics to fighting is how you level up. Instead of racking up XP in the many fights you encounter on those same streets, you earn money that’s then used to unlock new moves and buy your way through Yakuza 0’s skill trees. Combos and technique grant you more money at the end of the fight so be sure to use every trick you can, including a slo-mo smashing a guys face into a brick wall action. In practice, it means each fight is accompanied by showers of 1000 yen bills streaming across the screen. As a spectacle it’s gloriously over-the-top. While Yakuza 0 could feel a bit stale while watching cut-scene after cut-scene but there is plenty of other actions to distract you. Again, the story is engaging but sometimes it feels like you aren’t playing a game. The fighting and the mini games make up for a lot of that but that may not be enough to bring everyone to the table. If you are a big anime fan, you love the 80’s, think Japan is cool, and love random fight scenes then Yakuza 0 is the game for you and you can pick it up for the PlayStation 3 and PlayStation 4 for $59.99 on January 24th. If not, you may want to skip out on this one.