Geoff Keighley, producer and host of The Game Awards, has teased sneak peaks at two wildly popular games. Bethesda’s Prey and Nintendo’s The Legend of Zelda: Breath of the Wild will receive newly revealed gameplay footage at this Thursday’s The Game Awards.

Bethesda’s Prey will receive a “worldwide debut of new gameplay.” This title will be a re-imagining of the Human Head Studio’s 2006 Prey for Xbox 360 and PC. We got our first taste of Bethesda’s vision at E3 2016. Dishonored 2‘s developer Arkane Studios will helm this title, which has been billed as a “sci-fi psychological thriller.”

Over Twitter, Nintendo of America and Geoff Keighley have confirmed you’ll be able to watch new The Legend of Zelda: Breath of the Wild footage during The Games Awards 2016. Keighley Tweeted two images teasing the Zelda announcement.

The first features the Sheikah symbol. Previously, this symbol has appeared on Zelda series items like the Lens of Truth and Gossip Stones. The symbol will figure more prominently in Breath of the Wild, as the Sheikah Slate will figure prominently in the gameplay and throughout the game’s various ruins. The second image suggests that if you want to catch this footage, you’ll have to catch The Game Awards this Thursday. 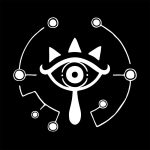 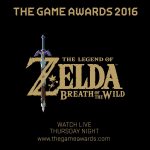 This recent news might give you incentive to watch The Game Awards this year, which will happen Thursday, December 1 at 8:30 PM ET / 5:30 PM PT. You can read about this year’s nominees here.