As a kid, I was a huge fan of the Fighting Fantasy books. For those who don’t know, they’re like a choose your own adventure book with a pen and paper RPG mixed together. You roll stats, manage health, items and gold, and read along as you make decisions and engage in combat encounters. Morgan Jaffit, Creative Director at Defiant Games, is also a big fan.

A Suit of Armour and a Suit of Cards
Hand of Fate 2, sequel to Hands of Fate, is a blend of a few genres. Most of the gameplay is done through moving a character along cards that trigger events, which can lead to gaining new resources or allies, conversations with a merchant or a gypsy, or a real time combat encounter. You travel along the cards until you complete the task necessary to unlock the final stage of the challenge, and there are 22 challenges in all. The cards are dealt to you by the mysterious dealer, back from the first game with schemes of revenge. A large change from the first title is the card-building aspect to the game, allowing players to manage their deck.

It’s a Video Game But a Board Game But a Video Game
The first thing that stood out to me as I played Hand of Fate 2 was the game’s incredible atmosphere. The dialogue, storytelling and voice acting felt like a masterfully crafted Dungeons & Dragons campaign, with the Dungeon Master guiding me through the world they had crafted. It’d be easy to compare it to actual D&D titles like Neverwinter Knights or Baldur’s Gate (both which are excellent titles) and they do feel like a D&D game in mechanics, but the presence of the Dealer acting as the game master, the very fitting musical score and well written encounters makes it feel as though you’re sitting around a table rolling critical fails and casting magic missiles at the darkness.

There is dice rolling, too. At times you’ll be required to pass dice checks, rolling a higher number than the opponent to get the outcome you want. Cards, beyond telling story encounters and showing items, also play a role. Cards are drawn before an encounter, with the number representing the number of enemies or allies, and the suit determining the kind of enemy, like Steel represents soldiers of the Empire. 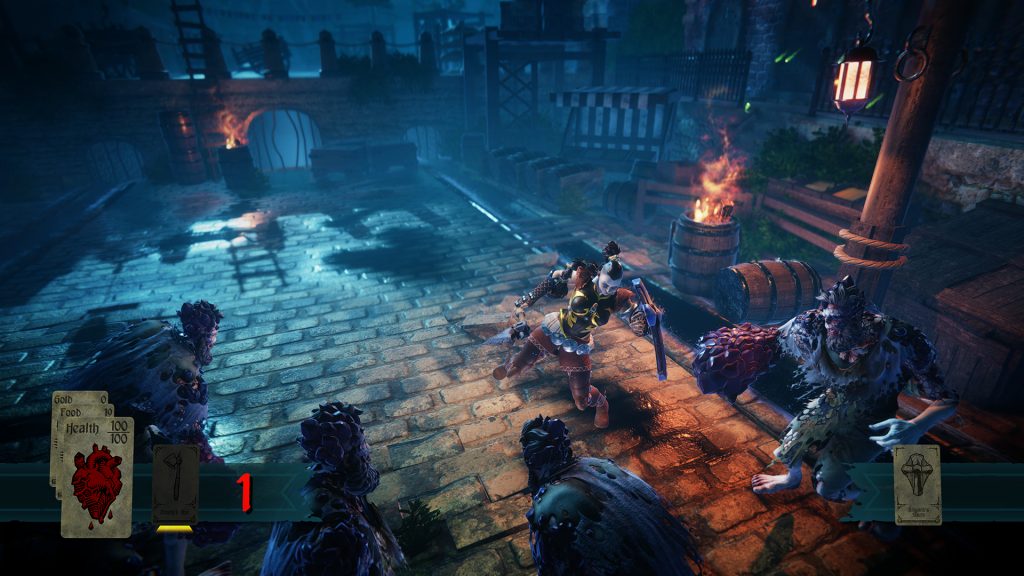 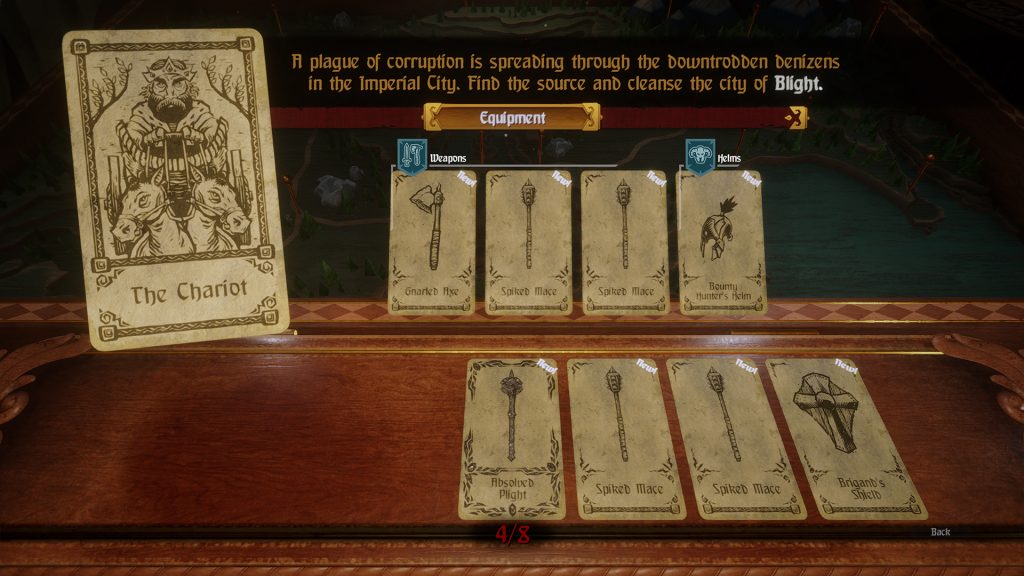 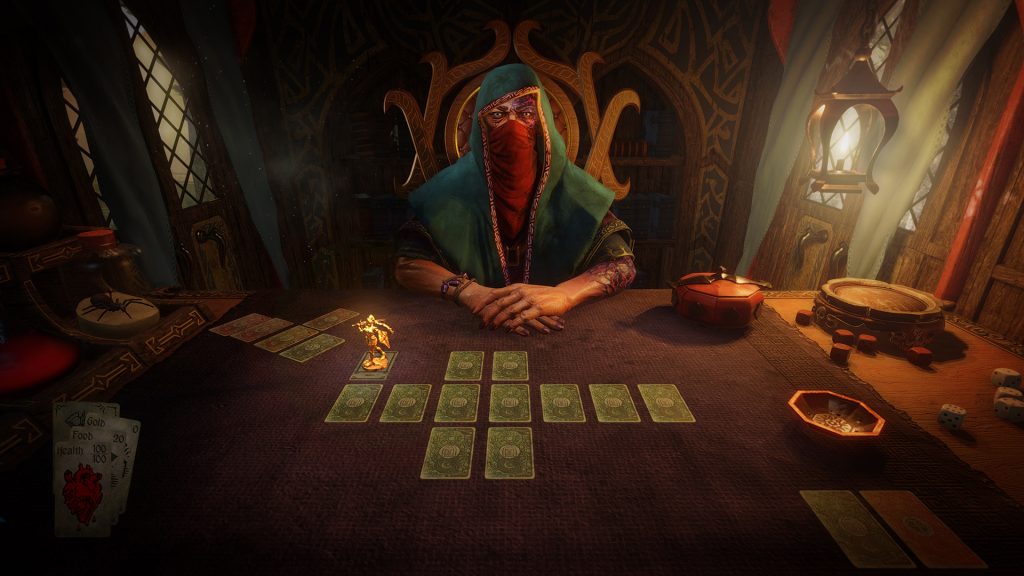 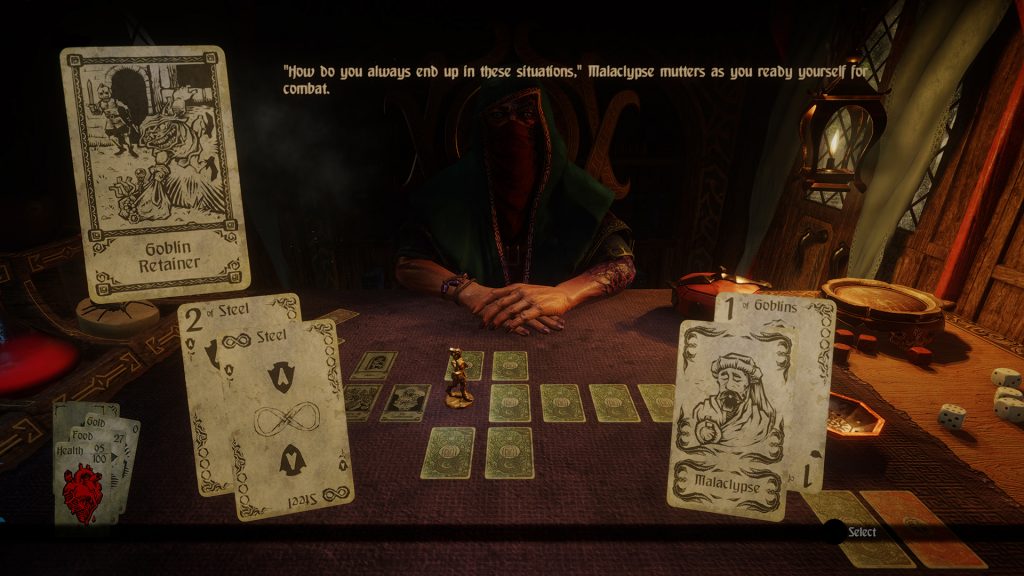 22 Challenges of Wisdom and Despair
The campaign of Hand of Fate 2 is split into challenges named after Tarot Cards, with the options available at the demo today being The Empress, The Magician and Death. Each has an objective set out for you from the start, for example, I played through The Empress and had to gain enough heroic fame to be worthy of a magic hammer so I can smash the seal guarding an evil shaman.

To achieve this feat, I travelled across the board encountering varying challenges, like aiding town guard in fighting off a raid of plague ridden zombie villagers, or simpler matters like shopping at a mage’s workshop or chatting with a travelling tracker (who unfortunately I didn’t have enough gold to recruit). The Dealer will comment on these as you go along, telling you bits and pieces about the people you meet and the history of the world at large. Going through these earned me fame bit by bit, until I had reached enough and my character commented that they could wield the legendary hammer needed to smite the shaman. This game is set 100 years after the original, and you’ll fill in what happened during that space of time as you go along.

The Hand is yet to be Dealt
Defiant Games hopes for the title to release early 2017 on Steam. If you’re eager to give it a shot, you can try out the original at its Steam page here. You can also check out the steam page of Hand of Fate 2 for updates here.

There’s also a physical card game in the works being made by the fine folks at Rule & Make. You can find details for that and much more at the developer’s official site here.