The topdown shooter is a genre of video games that seem to be overlooked sometimes and yet fans that play them would all agree that they are incredibly fun. Now ad a post-apocolpytic story to the topdown shooter and you have an instant hit. Livelock, developed by Tuque Games and published by Perfect World Entertainment, is a cooperative top-down shooter where you can play solo, or with up to two allies, to “break the cycle of infinite war between machines”.

Livelock‘s story is simple enough. After the world is destroyed, humanity’s last ditch attempt at survival rest in the hands of three human consciously controlled robots known as The Few, named Hex, Vanguard, and Catalyst. You fight off the machines that have lost control and fend for themselves now all while being directed by Satcom, an AI system left by the humans. The official description of the game is as follows:

“Livelock transports players into the 22nd century, the age of the machine. Nearly a century after the cataclysm, humanity is on the brink of survival. Clusters – groups of corrupted machines control what remains of the earth, fighting each other in an infinite war over resources that now threatens the very planet itself. Players take control of a Capital Intellect, a human consciousness uploaded to large mechanical body. Armed with a unique arsenal of weapons and special abilities, the Capital Intellect must fight the corrupted machine Clusters and break the cycle of an infinite war, before humanity is forgotten in the annals of history.”

Overall, the story is well thought out and immerses the player from start to finish. AI stories have always fascinated myself as a gamer and Livelock did not disappoint. Not only was the story good but the gameplay is addicting. While you play the main storyline in Livelock, with people or alone, the gameplay has a hook that will get you to play over and over again. Being able to pick from three characters, with three very different personalities, power-ups, and abilities keeps the game fresh and fun. While there are only 30 levels that unlock all your kits, there is no level cap. You can keep playing to power up all your favorite weapons and abilities until you are an unstoppable robot killing machine. Here is the breakdown of each character:

I was privy to playing with Hex at PAX South so playing with him felt easy to figure out right away. Hex is basically you typical Assault character. He is a smart mouthed gunner with a whole bunch of tricks up his sleeve from cluster bombs to Thermite detonators. Hex holds high damage battle rifles and rocket launchers and is probably the easier to handle of all three. However, that doesn’t mean the game makes it any easier to play with him.

Catalyst was a little more difficult to figure out as far as her weapons but once you got the hang of it you release how badass she really is. She has the most logical brain of the three and has a unique set of weapons that mostly deal electrical damage. She is also the team healer so its very important to have her around later on in the game.

Finally we come to Vanguard. He is most noticeable the tank and can pound and destroy most enemies as if they were nothing, especially if you upgrade his Gauntlets as high as possible. He can use guns, but let us be honest here, why would you? By level seven you receive a giant hammer and the game is a hysterical crunching noise of mayhem. Vanguard’s personality is very different from the brute’s you may be used to as tanks. Vanguard is philosophical, deep, and perhaps a little emo.

Livelock is a fun, humorous, and interesting take on the post-apocalyptic scenario. The topdown shooter is taken to a brand new level that makes you rely on more strategy and movement than the genre is used to seeing. There is a lot of replay value in Livelock. The music, the art and scenery, the colors, and sounds all make the game unique.

Livelock is out now for PlayStation 4, Xbox One, and PC. I highly suggest you purchase a copy and try it for yourself. Now if you will excuse me, I’m going to continue leveling up Vanguard because I laugh way too hard smashing things. 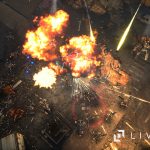 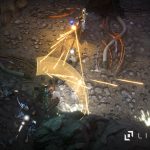 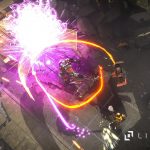 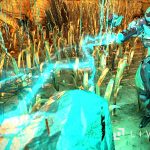 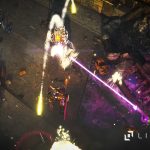 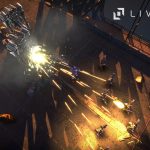 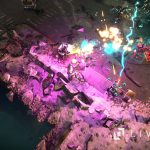 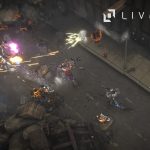 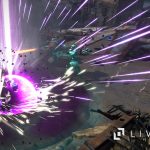