Sniper 3: Ghost Warrior developer CI Games has been churning out iterations in the Sniper: Ghost Warrior franchise, and a bunch of different copy-cat, “me too” titles since its inception in 2002. Over that time, the experiences the team has undergone in developing these less-than-perfect but solid titles have moulded the developer into a much more confident and ambitious place.

As is typical with so many developers, CI Games started out making knock-off titles just to earn its keep and a solid revenue stream, though maybe not notoriety. This is all fine for Chief Executive Marke Tyminski, who says those formative years were important to get the developer where it is today.

“We were a young studio when we started in 2002 … we’ve been organically growing, making more and more challenging projects. It was a long journey, but we’ve grown a lot as a studio. More people joined and at the same time the people who were already here were [developing personally] a lot. Those people made a major difference on what we’re capable of doing today. We’re a much more mature studio than we’ve ever been.”

That might seem like strange statement: A third-rate developer touting its own growth while simultaneously promoting another iteration in a series they’ve been developing for over a decade, but CI Games sees Sniper: Ghost Warrior 3 as a new step for their team, one that was spurred by their success with 2014’s Dark Souls clone, Lords of the Fallen.

This is evident in Sniper: Ghost Warrior 3’s switch from linear action to an open-world design philosophy, meaning that missions unfold in ways that require players to do something else besides snipe, along with choosing their own way to approach objectives.

One level that illustrates this perfectly has the games hero, John North, on an assassination mission that takes place at a rundown estate in Georgia. The player’s target is positioned in a window, a cliche setup for a target in a game all about sniping, but GI Games has added a few wrinkles to the scenario to change how it can play out.

“Military snipers don’t just shoot rifles in a range,”  Senior Designer Tomasz Pruski says, “They’re trained in all areas of expertise because they need to know what to do in any combat situation. We wanted to have that because our main character is a skilled sniper, but also a fully competent warrior in the other areas.”

An alert flashes and signals that a drone with valuable GPS information has gone down near the player’s position. Players can choose to go after the drone or to ignore it and take out the target.

Going after the drone leads players onto a rooftop which, unfortunately, results in a dead end. Not to worry, as players can now activate a Scout ability. This highlights all the important interaction points around the map. With Scout activated and new routes highlighted, the player then grapples onto a ledge which they can use to climb up to another rooftop and reach the downed drone.

With the GPS information gathered, the player sends out his own drone in an effort to mark enemies and plan his escape. Unfortunately the drone is spotted by some guards. The panicked player then decides to eliminate the target as quickly as possible but, without a suppressor equipped, the shot rings out across the estate and the guards are alerted to the player’s position.

The player then drops a smoke grenade to cover his tracks while making his way towards the exit. Two guards are blocking the road ahead, so he pulls out a pistol and unloads the clip into the two guards, clearing the path. 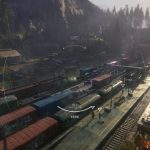 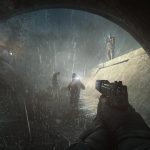 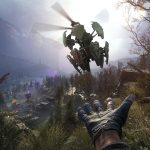 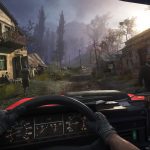 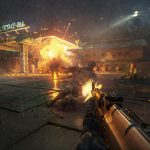 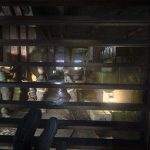 Whats most interesting about this mission are the things that didn’t happen. The guards were alerted to the drone the player deployed, not the players position, and the player could have used a suppressor and taken out the target without giving away their position.

Conversely, the player could have taken out a satellite dish on top of the building, which would have caused the target to investigate, providing another opportunity to eliminate him without pulling the trigger.

The whole scenario reads like something out of a Hitman game moreso than a Sniper: Ghost Warrior title, and thats kind of the point according to Pruski.

“Ultimately it’s mixing and matching [sniper, ghost, and warrior] elements to adapt to the situation as it unfolds. Even a skilled sniper can miss, the wind may be too strong, and when people converge on your location, you have to shift into warrior to engage or try sneaking away. It’s not sitting on a sniper nest and pulling a trigger for 20 minutes.”

GI Games are looking to deliver emergent gameplay opportunities like this as sub-missions revealed during main story missions, with objectives that require the player to adapt their play style on-the-fly. Tyminski continues,

“We can’t say, ‘Hey we have open-world gameplay here in terms of mission design,’ then give them only three options. We’re really giving them plenty to do, and maybe they may discover things that we didn’t think of. It’s a very clear decision you have to make when you design a video game. You can either allow for the unexpected choices, which causes some unexpected cool things to happen, or you don’t. We decided we are open to it; we want players to experience things we couldn’t predict.”

With the focus less on sniping and more on three different styles of play, whats to stop Sniper: Ghost Warrior 3 from becoming too muddled and getting too far away from its sniping roots?

CI Games assures that players wont be rewarded for going at the game Rambo style, and that sniping is still valuable. The game doesn’t reward bonuses for wiping out groups or taking over encampments, nor does it make players unrealistically strong and able to withstand bullets from a dozen guards.

All of these new additions and adaptations to the Sniper: Ghost Warrior formula sure do sound exciting, but emergent gameplay opportunities through added objectives are something that need to be placed, and carefully, by the developer. Whether the game is paced so that exciting, complex scenarios like the one outlined above happen continuously and consistently throughout the experience is something we will have to wait to see when the final game is released.

Sniper: Ghost Warrior 3 releases later this year for PC, PlayStation 4, and Xbox One